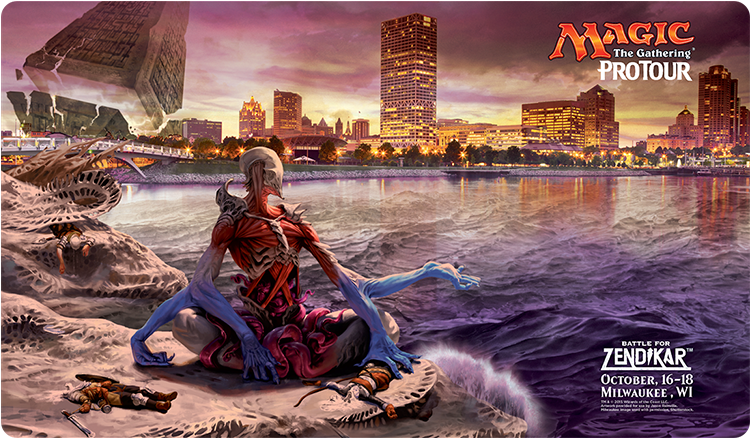 The stage is set for a weekend of epic card battles.  Despite a fairly muted response to the constructed playable cards of Battle for Zendikar, we find ourselves facing down a neatly refreshed metagame with multiple viable archetypes. After weeks of secretive testing, the top Magic teams on the planet have gathered for another epic battle between top Magic: The Gathering pros from across the globe. Over $250,000 USD is on the line, with the winner taking home a hefty $40,000 after three days of intense competition in in Milwaukee Wisconsin, USA.

As per usual, the Pro Tour weekends now feature a mix of booster draft (BFZ-BFZ-BFZ) and constructed formats with 3 rounds of draft Friday morning, followed by 5 rounds of Standard starting around 4-5pm EST.

For the MTG Finance community, the big question on all of our minds is whether any new cards from Battle for Zendikar will buck the trends of the first two major SCG Open tournaments of the season, and burst into the spotlight in Standard to push our recent specs into profitability. Will an overlooked card from the last block suddenly become key tech? Will there be a chance to get in on a must-have card that shows early promise or will the hype train leave the bandwagon speculators out in the cold without buyers come Monday morning?

With the Expedition lands suppressing the price of the rest of the cards in Battle for Zendikar, the conditions are right for some big spikes this weekend, though no-shows will find their prices undercut even further.

Many of the top teams have been in stealth mode for the last couple of weeks, furtively holed up in chilly northern hotels and AirBnB pads, attempting to break a format open that has stubbornly clustered around Jeskai Black, G/W Megamorpth & Ataraka Red thus far.

The early weeks of the new Standard format have demonstrated a fairly limited number of Tier 1 strategies that have a chance at dominance this weekend:

The most popular Tier 2 strategies to date have included:

With all of the testing this week there’s also the distinct possibility that this weekend will mark the debut of a sweet new brew, with my bet being on either an Eldrazi Ramp strategy or a B/W Mid-Range build leveraging Wasteland Strangler to emerge from the pack . With Standard starting before most of us are home from work, the stage is set for first mover advantage if an unexpected deck jumps out to an early lead in the hands of a reliable pilot. Which deck are you rooting for?

28 of the top 32 decks at the SCG Open in Atlanta last weekend featured white cards, a color that has long been thought to be underpowered in Standard. With 4-of appearances in the winning G/W Megamorph deck and the 4th place Jeskai Black deck, as well as 3-of usage in the 5th place Bant Megamorph deck and the 7th place Jeskai Dragons. Facing peak supply, Gideon is still holding the top price tag in his set, and at $32 could easily pop above $40 if he wins big this weekend.

No one is denying that Ulamog is one of the most powerful things to be doing in a deck that wants to ramp. The problem thus far has been that most decks have cheaper options to put away the game in Dragonmaster Atarka, Silumgar the Drifting Death or Ugin, the Spirit Dragon. With a fast, grindy format expected, the appearance of a strong ramp strategy may be an outside shot, but at $13, there is certainly upside if our tentacled overlord makes a strong showing.

Once an underestimated $10 pre-order, Jace, Vryn’s Prodigy has now blown through the ceiling for a Standard legal mythic, spiking towards $80 before falling back to $65 recently. Mostly being used in the various Jeskai builds at the top tables, Jace’s price direction coming out of the weekend should depend on whether he makes the Top 8. A miss could easily see the card fall back to $50-55, which a strong showing like SCG Atlanta could easily drive a fresh spike in the $5-10 range. As a strong believer in the future of Jace in older formats, I am actively looking for an entry point under $50.

No one denies that the creature is powerful, and fooling around with exile effects certainly brings some popular side benefits, but we’re still waiting for a viable ramp strategy to show that it can hold back the early aggro decks for a long enough to set up camp. So far, nothing exciting has emerged, so this could be a card set to sink yet further coming out of the weekend.

With Hangarback Walker being played everywhere coming out of late summer, the format has shifted to a preference for exile effects, with cards like Silkwrap, Complete Disregard and Utter End seeing increased play. Consequently, the stage is set for this dangerous creature to find a home in a B/W Tempo Deck similar to the one I’ve been testing lately with exile effects, Drana, Gideon, Seeker of the Way, Sorin and Wingmate Roc. Being able to kill an early threat, and then take out a Deathmist Raptor or Mantis Rider should not be underestimated, and at just $.40, I’d love to see a big pro give me a reason to go deep on this portable 2-for-1.

Despite my misgivings in late summer, Ojutai has managed to find a second spike in the $30 range, and is now sliding back toward $25 on lessened play facing a metagame full of sacrifice effects, led by Crackling Doom out of the Jeskai Black decks. If that trend continues I would expect to see limited play from the Azorious Dragonlord this weekend, and a further slide back toward $20.

Both of these recent Pro Tour winners are on a Jeskai Ascendancy build with Gideon, leveraging a pile of tokens via Goblin Fodder and Hordeling Outburst to try and go wide on opponents.Jace is also present in both decks. The players split the first two games.

Round 5: (2nd Round of Constructed)

In Game 1, Marcos fails to ramp in time to stem the aggressive tide from Jon Stern.

Owen is on a fairly familiar Jeskai Black build, while Mihara is playing Treasure Cruise alongside the usual Abzan cards. Owen takes Game 1 down with the help of Jace recursion on Roast. Mihara bounces back to take game 2. Mihara steals a noteable Dragonmaster Outcast with Exert Influence in Game 3. Mihara also running a miser Bring to Light, and manages to take the match.

Round 6: (3rd Round of Constructed)

Wilson takes the match 2-0 to advance to 6-0 as Oliver resigns from the match in frustration after a misplay.

Calcano takes down his match with his innovative color shifted version of Aristocrats.

Mihara’s innovative Abzan build splashes blue for Jace, Everywhere Prodigy and Treasure Cruise. Turtenwald is on a fairly standard Dark Jeskai build, leveraging Crackling Doom and Tasigur for value. The match was a grindy and technical affair, but Mihara managed to come out on top after three.

Michael Majors is showing off his updated build of the expected G/W Megamorph deck.

Round 7: (4th Round of Constructed)

Both builds were fairly well known here. PVD takes it down 2-1.

Round 8: (5th Round of Constructed)

Lantto’s deck represents a revised version of earlier Esper Dragons control builds, with Ob Nixilis, Reignited and Gideon, Ally of Zendikar standing in for the cards no one wants to lose to Crackling Doom or Foul Tongue Invocation this weekend. Tamada chose to eschew a 4th color alongside his streamlined Jeskai build, looking to ensure that Jeskai Charm could consistently push through the final points of damage. The strategy paid off again here, with Tamada taking the match in two games, and leaving him at 7-1 on the day.

At the end of Day 1, only Eric Severson remains undefeated, with his Jeskai Black build.

Our Day 1 Metagame breakdown looks as follows (% of field in brackets):

Though the three decks with the best records in recent weeks occupy our top slots and make up a full 40% of the metagame, the field is still relatively wide open with more than 20 distinct deck types representing at least 1% of the field. This likely indicates that team testing resulted in no certain feel for the best deck in the format, and a relative lack of reliable trumps against a field full of diverse threats and answers. In such a format we can likely expect to see both skill and experience contribute strongly to our winner.

Full details on the metagame can be found here.

Join us at 11am Saturday for Day 2 coverage of Pro Tour: Battle for Zendikar!