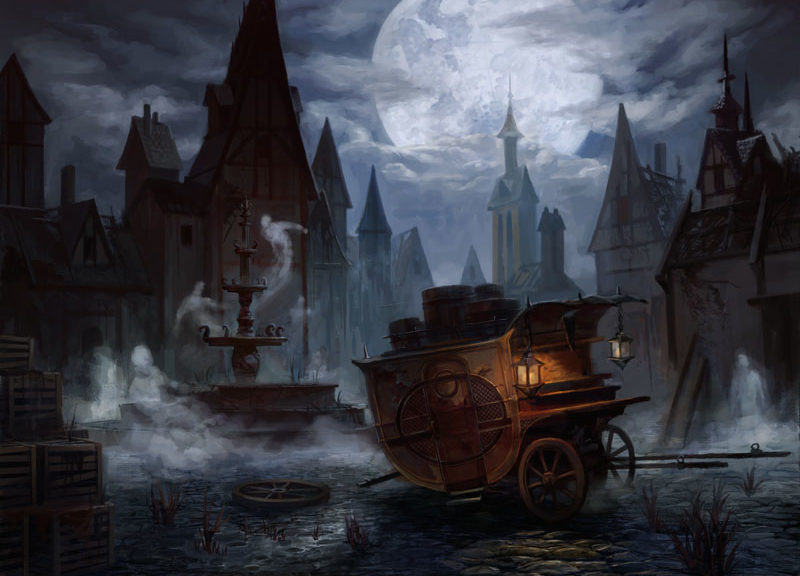 The economist Milton Friedman once said “We’re all Keynesians, now.” He was throwing a fit because Richard Nixon opposed grinding up the poor for fertilizer or something equally leftist. He also died in 2006 so at least he never lived to see the Obama Administration. Whether you agree with a guy like Friedman who once said “A minimum-wage law is, in reality, a law that makes it illegal for an employer to hire a person with limited skills,” he was right about one thing – we are all Keynesians, now. I don’t mean we as in the people who are arranging the deck chairs on the Titanic as we wait to see which country we’re going to fight in a nuclear war, I mean in the sense that we, as people who are watching Commander 2018 spoilers come out and trying to make money are trapped in a scenario popularized by the economist John Maynard Keynes. I’m referring, of course, to the Keynesian Beauty Contest.

“I’m Not Clicking That Link”

Well, you should. It’s sort of boring and it’s also not super obvious how that wiki article (for real? You won’t read a wiki stub written by, probably an economist but you’ll listen to me wax philosophical for 2,000 words because I use a lot of graphs?) how that applies to Magic finance.

I got your back. Here’s another link you probably won’t click, but it’s an article I wrote a while back about this same topic and how it applies to MTG Finance and you should read it before we move on.

Seriously, you’re not going to read that, either? But I wrote it, presumably you value my opinion if you’re reading my arti… no, nope. I’m not letting you do this to me today. I’m not going to get upset at some random person on the internet not taking 5 seconds to… RRRRRR. FINE. Look, I’ll summarize the concept for you, and you won’t have to click any links and unlike the piece I wrote years ago, I’ll use pictures this time. You like pictures, don’t you? Yeah, you do.

Keynes proposed the problem of a contest that was similar to one routinely held in newspapers at the time where they would show pictures of women and readers would vote on who they thought was the prettiest. Seems easy, right? Well the winner was the entrant who correctly guessed the 6 pictures that got the most votes. Suddenly how you vote has less to do with what you think and more to do with what you think others think.

Suddenly, you can’t think about your own personal tastes and you have to instead focus on guessing not only what will be popular but whether others will vote the same way thinking next level like you are or whether they’ll vote what they think. You could get into what Mathematician John Nash said about this problem, but that dude lost a game of Go to a figment of his imagination, so who cares what he thinks? Actually if you do, I wrote about Nash Equilibrium a bit and found this graphic that talks about the problem where you try to guess 2/3 of the average answer that I mentioned in the Keynesian Beauty Contest article I wrote… jesus, 5 years ago. 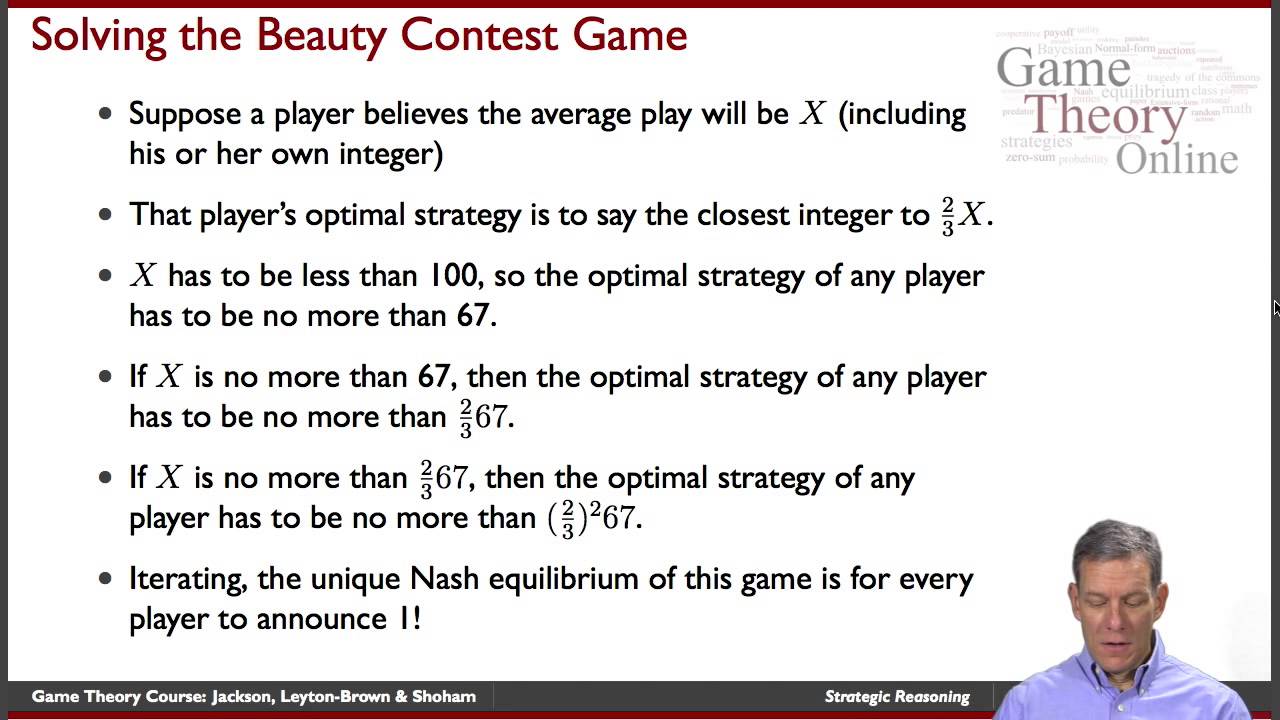 The beauty contest we’re all stuck in right now is this weird period of trying to guess what four, 100-card decks are going to look like based on a very small number of previews. We’re trying to guess which cards interact with those cards and will go up in value but really, we’re locked in a Keynesian Beauty Contest where sometimes the cards need the picks to be obvious to someone who’s thinking first-level and only picking what they like. You could also think of it that we need to make picks that appeal broadly because we’re trying to guess what everyone will say they like, not what we like. We’ve been on a kick lately where we’ve said things need to be obvious, especially to people who know way less about EDH than they think they do (and maybe less about mtg finance than they think they do, but the world needs greater fools – they put our kids through college). How obvious does a card need to be? Let’s look at my pick for hottest girl and let’s look at who got the crowd vote. 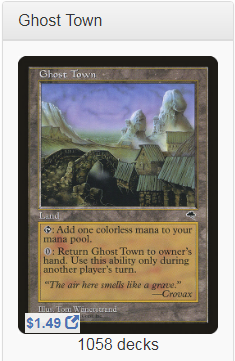 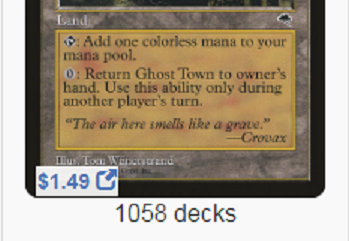 Do you want to do one more comic zoom in? 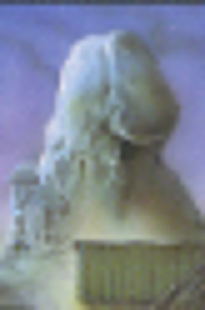 There were a lot of chances for this to go up, but I feel like Ghost Town is the equivalent of a Keynesian Beauty Contest contestant whose picture was accidentally omitted from the picture. People have to know a thing is a thing before they can do a thing with the thing. I think it was Nobel Prize-winning Economist Oliver Hart who said that.

Meanwhile, a card that’s probably fine but in fewer decks and less cheesy than Ghost Town is in Tatyova had a different 2017. 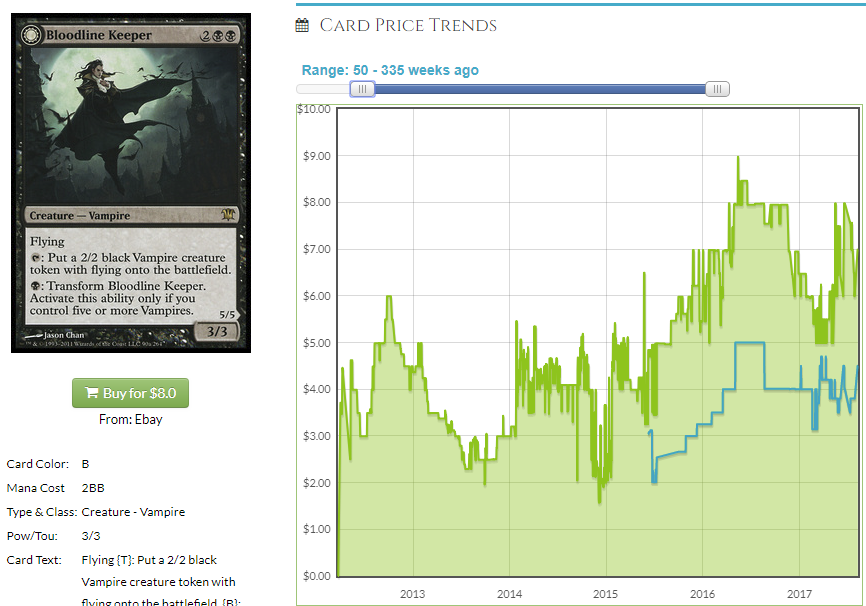 -pires. Wow, didn’t even finish getting the word out of my mouth. OK, then.”

Where This Leaves Us

Clearly we need to be thinking next level. Not only do we think about what we would buy for our own decks (Instead of buying 1 Chain Veil I bought 25 back in 2014 and I’m super glad I did) because what we would build is usually a good indication of what others will build, provided it’s sufficiently obvious (the way Wall of Kelp is in Arcades and Ghost Town in… name it, isn’t) that others will go along for the ride with you. Having enough co-buyers isn’t about having a large enough shadowy cabal to manipulate the market but it’s about having more people than just you on a card. Can you make Seance happen through sheer tyrrany of will? Literally multiple people have tried on multiple occasions and to this day, Seance is the example I use as a counterargument to the notion that cards I call on Brainstorm Brewery are going to go up because I said the name of the card on a podcast.

You need other people to go along with your spec and if you don’t have a platform to trick them into it, you better try and think like them. We’re picking winners, but we have to pick the winners others pick. You may not feel like a genius picking a bunch of walls up when they spoil a card like Arcades, but you can rest assured if you vote for walls to be the prettiest girl at the dance that week, you’ll be in good company and being in good company is the name of the game. You want to show how smart you are? Pick the card everyone else picks and do it two weeks before they pick it so they buy their copies from you at the new price. If you can’t ever manage to do that, maybe you’re not THAT much smarter than every other rube out there. I mean, you probably are. But ARE you? I mean, yeah, I just said you were. You read my column which means you care about finance and you’re still reading it after that boring crap about Nash and Keynes, so you’re probably smarter than the average bear-buyer. But ARE you?

You All Hate It

when I teach you to fish but don’t end the article with a bunch of fish on a platter for you. Based on the Izzet and Jund stuff we’ve seen, I have a few ideas. But first….

Kittycat of the Week

$20 per for a fringe albeit RL rare from Alliances? Godspeed, team Kittycats. To be fair, people have been talking about this card for a few weeks since we saw art that looked like Varchild so it was reasonable that Varchild might get printed and might synergize but that wasn’t guaranteed and people quadrupled the price on mere suspicion. I think it might end up settling around $8-$10 and it might go in a deck built around Varchild (which will suck) but that’s about it. Their logic was unimpeachable, I guess, but just because nothing they assumed was wrong doesn’t mean anything they assumed was right or matters. I think this is pretty silly. 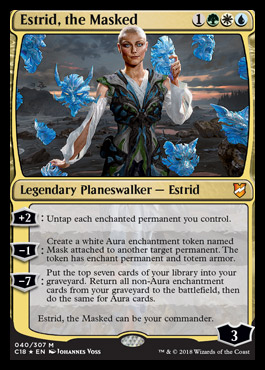 Estrid goes infinite with a masked copy of The Chain Veil and masked mana rocks but it’s way easier to go off with enchanted lands. My Enbantress deck was already running Utopia Sprawl, Overgrowth, Wild Growth and Fertile Ground. 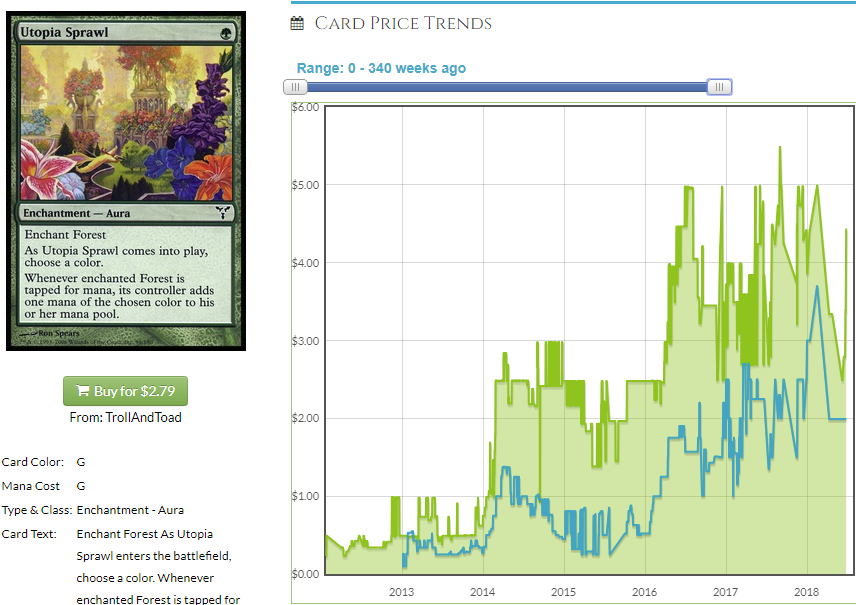 Masters 25 is basically done doing what it’s going to do in a downward direction and everything is going to head back up. Sprawl got down to like $2.75 and Modern and Pauper give us some help here. This isn’t sexy, but considering I find these in bulk, it doesn’t need to be. Free money like this is my everything. 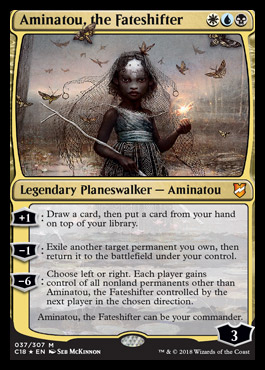 When you heard one of the new Planeswalker commanders went infinite with Felidar Guardian, be honest, you thought it was going to be Saheeli. Well, it wasn’t.

Keep an eye on Miracle cards because any that aren’t in the deck will want to be in the deck, but it’s a decent bet that Scoll Rack won’t get a printing here and neither will Personal Tutor. 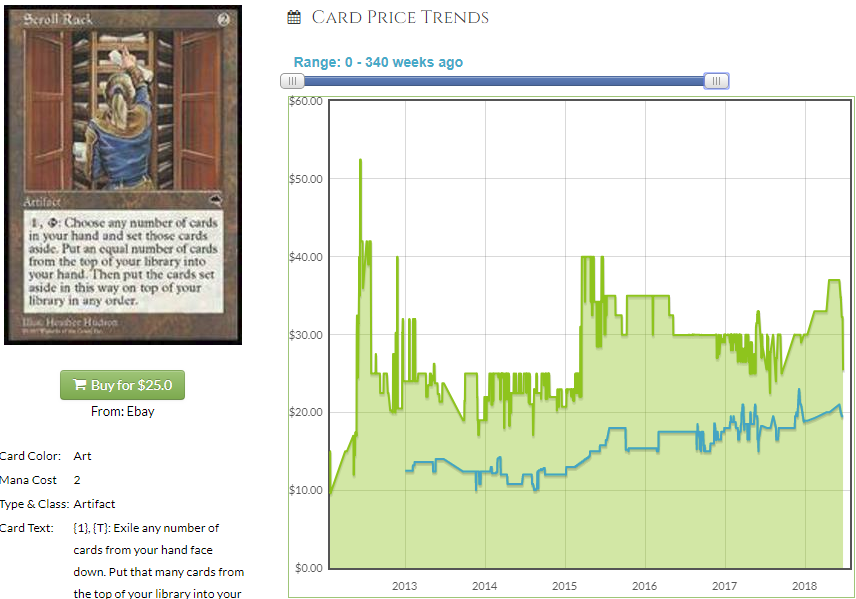 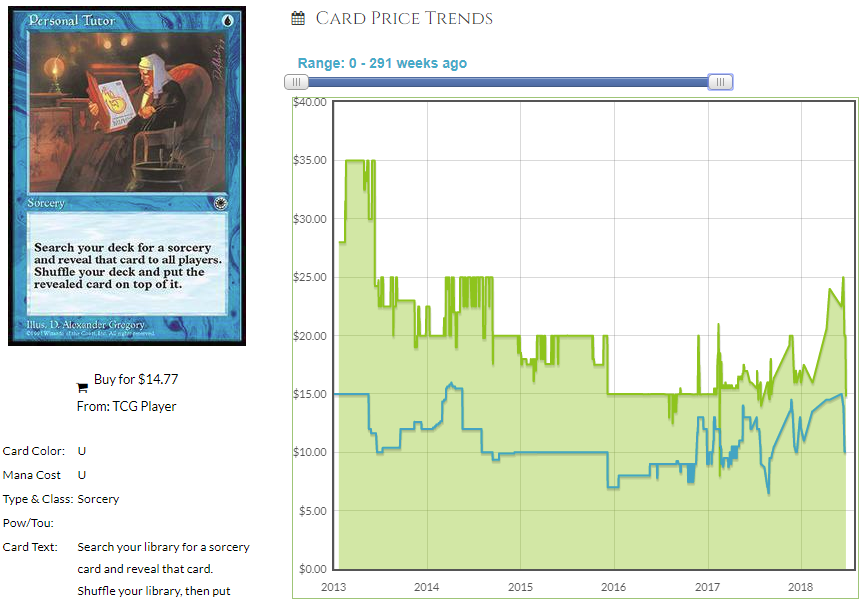 Everything old is new again. Remember when Miracles was first announced and everyone bought deep on these cards to enable Time Walk in Legacy? Well, it didn’t happen because that’s clunky and stupid but you know what isn’t clunky and stupid? Making money off of Personal Tutor a second time. The top card will matter in this new Esper deck and having this tutor already on the upswing will only help its popularity and therefore its price. It’s already going, it’s going to go more. The underlying metrics of Scroll Rack are pretty good, also. 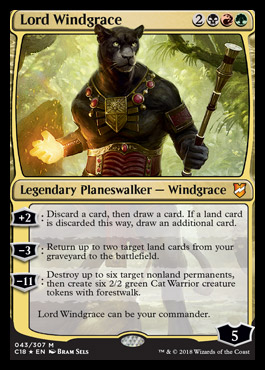 That does it for me this week. Thanks to everyone for reading. We’ll have some EDHREC data next week, I hope, and that means we can play a game where we can see the board and that will help immensely. Until next time!