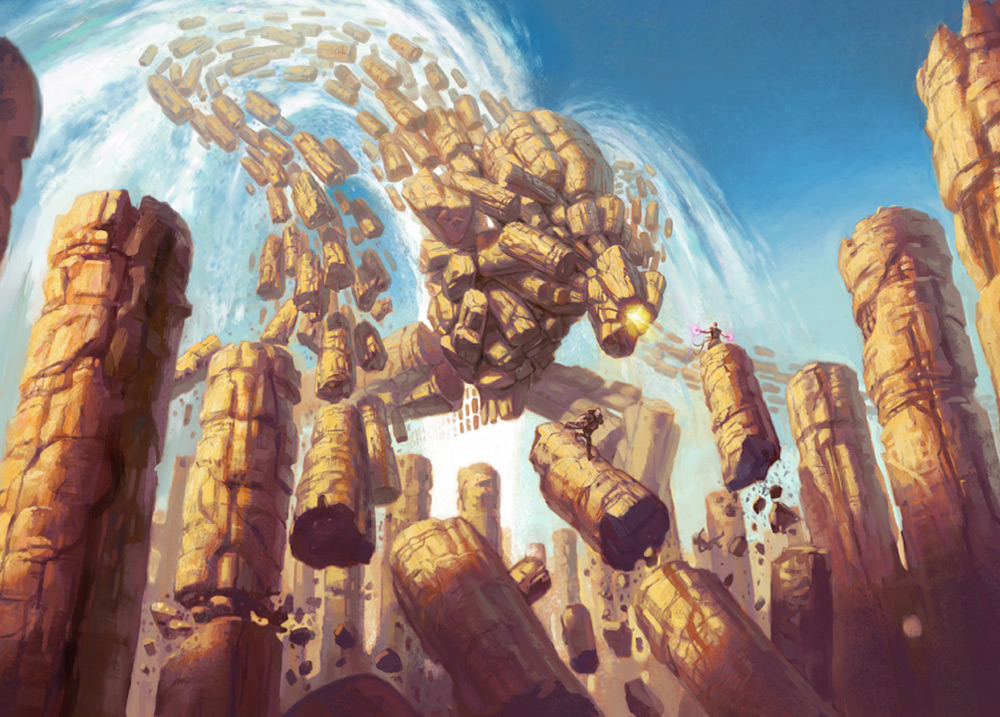 Unless you were on site, you would not have known that Starcity had to split GP Richmond up into two areas of the Richmond Convention Center. One room was the Green and White flights, and another room was the Pink Flight. As you might guess this caused a lot of controversy amongst the tournament attendees. Based on when you signed up for the tournament you may not have gotten to play in the same hall as your friends were. I was assigned to Pink and none of my friends were. Thus I was separated from my group that I came down with for the tournament all day. Despite this I had a really great time and wanted to share my experience with all of you.

I went 4-3 Day 1 with UWR Midrange and then dropped after Round 7. Technically my final game Round 7 was a tie however I decided to concede the game to my opponent because we were both X-2’s at that point and neither of us would have made Day 2 with a tie.

This list is a facsimile of the deck that made the Top 8 of GP Portland last year and I liked it because I was familiar playing the list and also thought it would be a good choice against the various Affinity and Zoo decks that I foresaw playing against.

Based on the Top 8 I bet most of you are wondering why I wanted to run Wrath of God over Anger of the Gods. I thought about this choice for a long while and still decided to run Wrath over Anger because of Tarmogoyf and the possibility of seeing Thrun throughout the day. Wrath still worked pretty well for me but I never played Pod to test out how good it would be against that archetype.

I don’t want to harp on about my playing too much (since I’m sure you all want to hear about financial analysis) so here is how I did:

I did not get matched up against Pod, Splinter Twin, or RUG Twin at all, which makes me slightly disappointed since I wanted to see if I could win against those match ups. Luckily I avoided B/W Tokens, Living End, and Bogles, which are my deck’s hardest matchups. I also didn’t play against any random brews so I feel like I was able to get a lot of good playtesting at GP Richmond.

In retrospect, combo was a great choice for the tournament (thus why Pod got five of the top eight slots). However, combo and Affinity weren’t the only takeaways from the weekend. Modern is a wide open format despite the Top 8 results. There are a ton of decks you can play, and similar to Legacy the format rewards people for knowing how to play their deck really well. I was able to win a lot of games by just auto-piloting my deck through the usual motions due to all the interactions I discovered playtesting with it. I would bet the same is true for everyone playing Pod, Affinity, and U/R Twin that made the Top 8. They are all tricky decks to play at the best of times, so knowing your deck really well definitely gives you an advantage over less experienced players.

Ironic that my tie is to the deck that people were laughing at and calling tier 2. Well, let me inform you – the person that I conceded to did make Day 2. Faeries can still sling some cardboard pretty well and my deck just happened to have a bad matchup against them. Bitterblossom isn’t an $80 card but that doesn’t mean that it is complete garbage. I would still watch out for Faeries pieces to move in the future. Some cards that I saw in the person’s deck that interest me included:

I would bet that out of these Vendilion Clique and Tectonic Edge are the safest in terms of going up in price and then holding onto their price until a reprint.

Based on my own matchups, and in addition to what I was hearing from other players, I want to target the following cards for future growth:

On the trading floor, I was able to scrounge through $1 to up to $10 binders for deals. This was completely worth it. I was able to pick up Chain Lightnings for $6 HP, 4 out of the 5 Medallions (every color except for white) for $5 each, Chokes for $0.50, a playset of Scapeshifts for $36, and Japanese foil Myr Enforcer and Frogmite for $2 each. Unfortunately only one vendor had these types of binders but I was still able to get a lot for my money while on the tournament floor.

Everything else cardwise for Modern was totally over priced. One crazy card spike was Runed Halo, which went up to $15. Many dealers sold out of these during the tournament. I myself played two of them because they help my matchup against Bogles and Storm. I saw later that they also went up to $15 online yet I don’t think this price will be sustained. They are great sideboard tech at their best, so unless Torpor Orb is soon to become a $15 card I would not want to be picking up Runed Halos right now. Some of the cheapest deals were coming from Channel Fireball who were selling Celestial Colonnades for $17 each and offering great buylist prices for many Modern staples. I offloaded a bunch of Genesis Waves and Sigg, River Cutthroats to them for $3 each buylist which I thought was pretty good.

You could also find great deals on other products. Troll and Toad was selling Dragon Shield 100 count boxes for $8 each which is 20% off the usual going rate. I picked up a few boxes of these because you almost never see Dragon Shields that cheap.

Surprisingly, the Eternal Witness playmat that I received from GP Richmond is going anywhere from $55 to $80 based on complete eBay listings. If you didn’t do so well at the tournament, take solace in the fact that the playmat and GP Batterskull that you received (which is going for $30 at Starcity and anywhere from $35-$45 on other websites) more than paid for the basic tournament entry of $40. 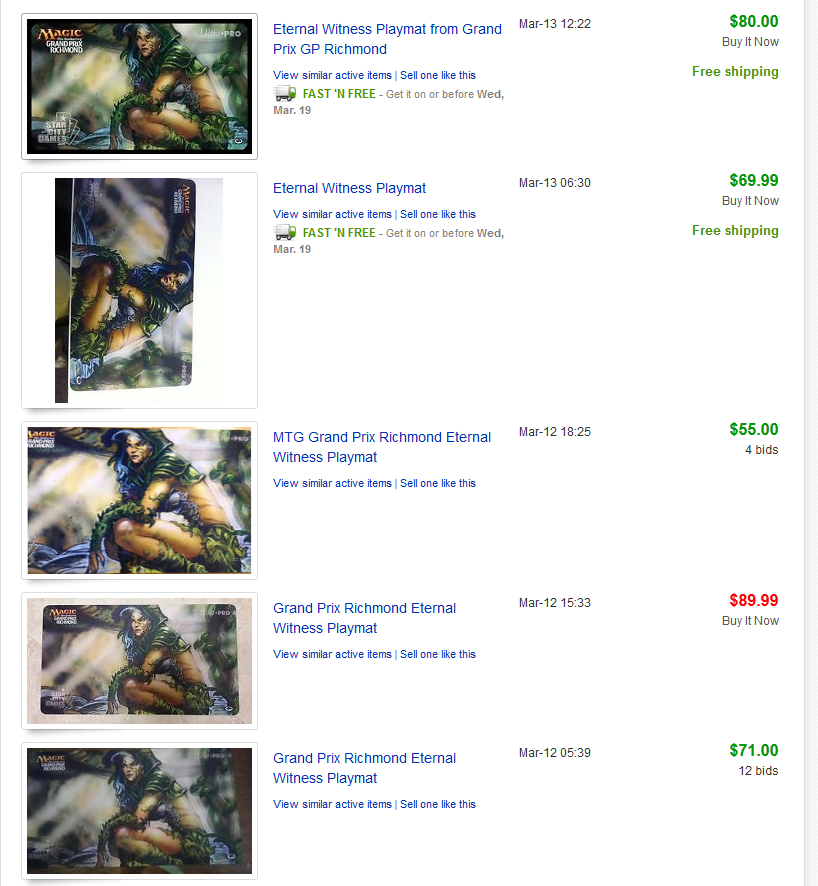 All in all, it was a great weekend to find deals and discover which Modern cards are currently trending. I will be looking towards picking up pieces of Modern decks I am working on building (like Pod and Affinity) in anticipation of the summer and more Modern tournaments. Modern is a wide open format, so the field could change significantly going into the summer, but I have a good feeling that I will still be playing UWR Midrange going forward. Even though a lot of my games went to time during the rounds of the tournament it is the deck I know best how to play and I believe that this will lead me to more Modern success.

One thought on “GP Richmond: A Tale of Two Tournaments”