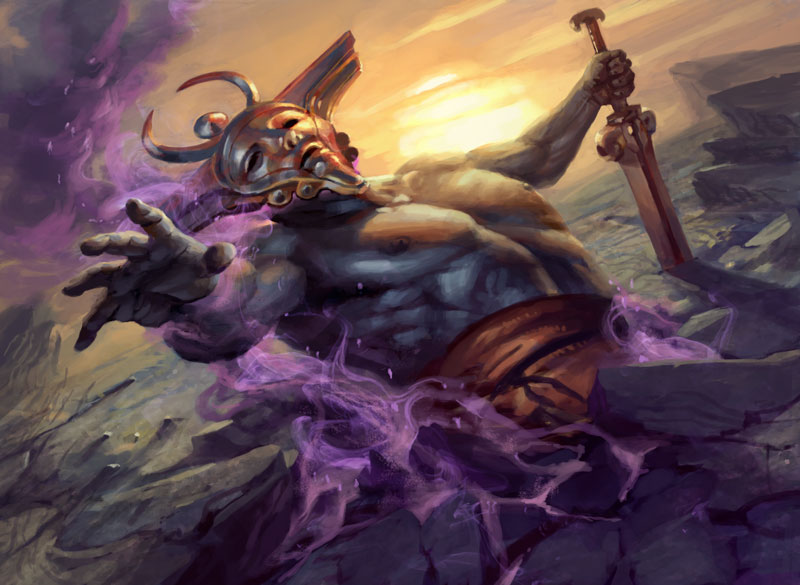 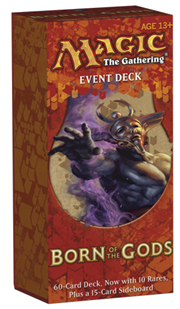 With another set release comes another event deck. I think that it is a great idea that Wizards releases these event decks to accompany set releases because it allows players who may hop into the Standard cycle later than the fall set release to quickly grab a deck and get started playing. Though no one who is playing in a seriously competitive tournament would consider playing this deck as built, they do include several chase rares that are currently being utilized in Standard-winning decks. Having an event deck allows players to purchase Standard rares at a bargain price, and it even comes with another 70 cards.

On to the event deck:

While the sideboard of the deck offers us hardly any value (two Staff of the Death Magus, really?) the main deck contains several notable black rares and uncommons. Two Xathrid Necromancer was quite unexpected, and unfortunately kills any chance that he may have had of breaking the $5 barrier. If you are holding any copies of this card I would try and trade them away because they are never going to more expensive their current average price of $5.

Let’s figure out if the deck is worth the MSRP.

Wow, compared to the Theros Event Deck this deck is quite a steal at $25 MSRP! The value of the deck cannot be understated – though it is a shame that Mutavault could not be included as a 1-of. Even without Mutavault you will certainly get your money’s worth though.

Another item of note (beyond Xathrid Necromancer) is that this will suppress prices of Desecration Demon, Pack Rat, Hero’s Downfall, and and Bile Blight. Bile Blight will still be sought after a year from now – I just don’t think it will ever go over $2.

Last week’s banned and restricted list announcement sure made some shock waves in the Magic community. I think the biggest was that Bitterblossom is now unbanned in Modern. (Yes, debatable with the Deathrite Shaman banning, however I would argue that rumors were abound about him being banned for quite some time.) The Wild Nacatl unbanning is pretty cool too, and if you missed Travis’ article last week on what to expect from the unbannings I suggest you check it out. There is a lot of good information in there about what other cards to expect to go up in price other than Bitterblossom.

Since I’m on the topic of event decks this week, I have good reason to believe that the announced Modern event deck will contain at least one copy of Bitterblossom. The reason I believe this is not only because there were rumors previous to the unbanning that Wizards could be printing a B/W tokens deck (which I talked about here), but also because I have faith that someone at Wizards had the foresight to create an event deck based around the Bitterblossom token strategy since they knew the price would skyrocket once they announced its unbanning.

I would like to speculate around cards that could be reprinted in a Modern B/W tokens strategy. Some ideas based off mtgtop8 reports include:

Planeswalkers
Elspeth, Knight-Errant
Elspeth, Sun’s Champion (this is a long shot, yet you never do know – this is an event deck after all)

I would be very hesitant to pick up any of the high dollar staples that could appear in a B/W tokens event deck – with another reprinting, they would certainly go down in value and you can lose out if you trade for them too soon. On the other hand, if you have extra components for the B/W tokens deck you should sell into the Bitterblossom hype as soon as possible. Bitterblossom is good, however I don’t think that it is $80 good and it should drop in price from there. The same is also true for the other cards that could go into the B/W tokens deck.

Using the Tools of the Trade

In light of the Modern format shakeup I would recommend utilizing the Modern 50 Biggest Gainers / Losers chart that mtgprice offers. There have been, and there is going to continue to be, a lot of action around Modern singles over the next few months leading up to the Pro Tour. Using this list is an easy to way to keep track of which singles are moving the most, either in a positive or negative direction. Taking a look at this gainers report from Friday I can already see some trends starting to occur: 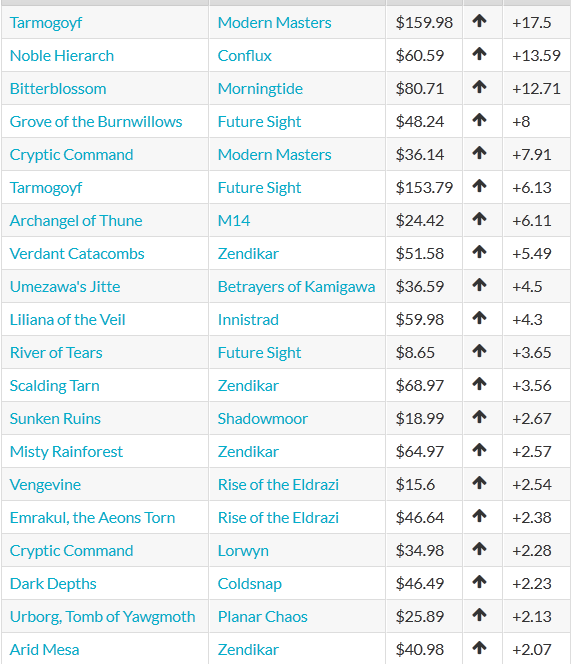 Looks like with the banning of Deathrite Shaman in Modern that Noble Hierarch has taken over the one drop slot of mana fixing / acceleration. I don’t really see this card being snuck into the Modern event deck, so this new price of $60 seems to be solid until a reprint.

Looks like Grove of the Burnwillows continues to see a trend upwards, which could be attributed to it’s recent Legacy performance in the winning Lands deck at SCG Baltimore in addition the massive amount of Modern play the card sees.

Tarmogoyf has broken the $150 barrier and there doesn’t seem to be an end in sight – even with a reprint this card is absurdly expensive. It’s funny, the Modern Masters version of Tarmogoyf is more expensive than the Future Sight version. What gives? I guess players love the new art more than the old classic – most likely due to how ugly the Future Shifted card frames look. [Totally wrong. FUT border > Old border > Modern border. -ed]

Scalding Tarn looks like it could break the $70 barrier and keep going. Those Zendikar fetchlands are not getting any cheaper until a reprint, so hold on to any you might have. Maybe the event deck won’t be B/W tokens? (*cough* fat chance *cough*)

An interesting inclusion in this list is Vengevine – an increase also due to the banning of Deathrite. Having a promo printing could keep the price of this guy down, but if new graveyard strategies turn out to be pretty popular I could see him reaching the $25+ range. If you plan on playing a graveyard based strategy in Modern, feel free to pick up your Vengevines in case you need them. I don’t see him being any cheaper than he is now.

3 thoughts on “Born of the Gods Event Deck – Bitterblossom Event Deck Next?”