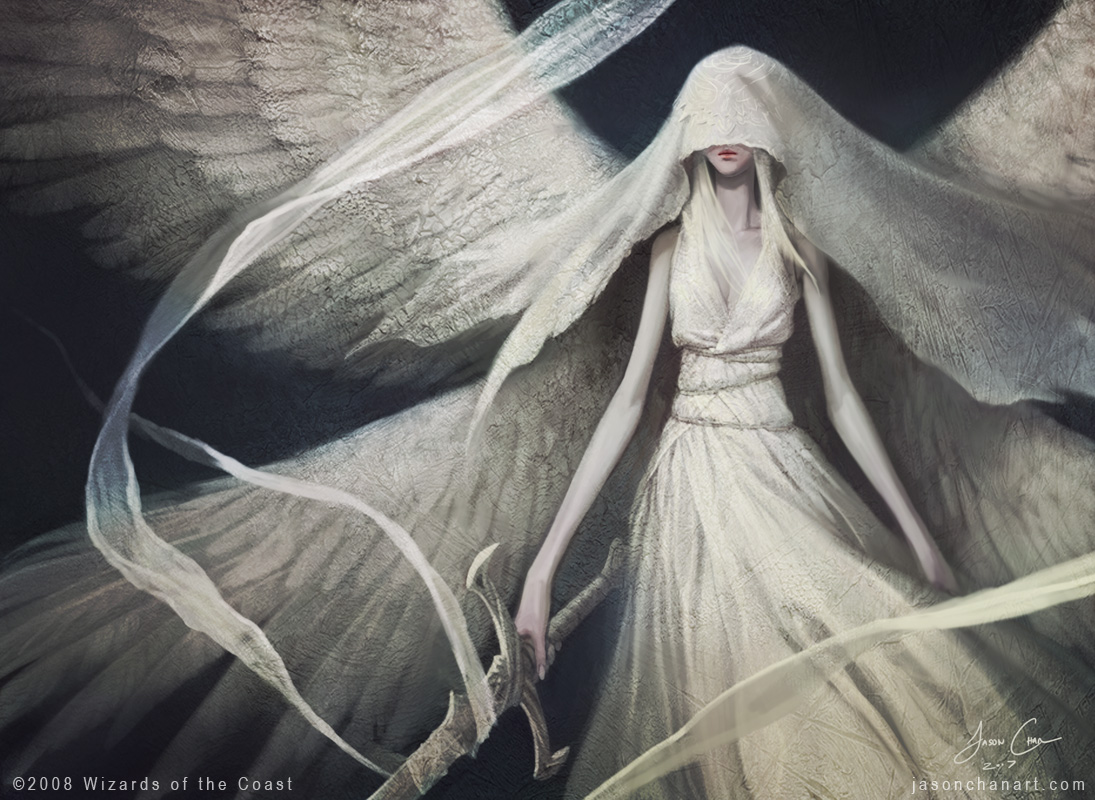 Reprints are a fickle beast. If there is enough demand for a card when it is reprinted, like Tarmogoyf and Dark Confidant when Modern was being pushed upon the Magic community, the market can respond in a frenzied way by spiking the price because of increased demand. Mutavault is a more recent example of this, where it was reprinted for Standard and was the most expensive rare for quite a while because it fit into so many deck strategies. Casual demand is the other reason that cards are reprinted which almost always will result in a price decline.

Today I’m going to focus on the casual demand of reprints by highlighting the new Duel Deck Anthology. Based on the duel deck announcements, I wondered what the most expensive cards from the upcoming duel deck anthology currently command as singles. Gathering some data from MTGPrice we can see that the following cards are the most expensive from the decks.

The first question that pops to mind when I see this list is if they are going to create new art for some of the cards, like Liliana or Jace, or if they are doing strict reprints keeping everything the same except for the new card border. I expect that they are keeping the art the same but let’s pose a hypothetical scenario where they decided to give some of the cards new art.

If they create new art for some of the cards, then I could see many of the current duel decks singles prices dropping 20% or or more. I’ve been fascinated with watching over the years which art of a particular card version the community decides it likes more than another especially when new cards are released. Players love the original Demonic Tutor art but I also hear much praise for the DvD art as well as the judge foil art commissioned. Many times it will come down to personal preference, whether someone prefers a card art due to nostalgia, artistic style, or the subject portrayed in the art. Even still, though there are many different artistic tastes out there, most of the time players can still reach an unofficial consensus of which art piece comes out on top out when discussing a Magic card and its reprint(s).

Card art is definitely a factor that boosts the desirability of a card – if you don’t believe me, try and purchase one of the newly released judge foil basic lands.

I’m pretty sure even Terese Nielsen is baffled at what people are offering for these basic lands. Not that I blame them – it’s a smart business decision that will lead to further profits down the road based on the rarity of the lands. Word on the street is that there are only 5,000 of each of these land packets being distributed to judges. That’s on par with the SDCC Planeswalkers, which means you know they are already going to be hard to find. An Arthur Halavais comment on reddit provided an even more pressing case for the expected rarity of these lands:

The uber collector is going to want these for a cube and that means they are going to want as many as they can afford. Based on the price and rarity, whoever that may be is going to have a hard time getting 50 copies of each of these judge lands – but you know that someone is going to try. This is why shops and vendors seem to be scrambling over each other in a mad dash to acquire these lands as fast as possible before people realize what they have.

Circling back to the hypothetical new art scenario, new art could spur interest for cards that receive it. If it comes to light that new art has been commissioned for the flagship cards of this set then I would hold off liquidating any copies of cards you may have from the old duel decks. Wait for community input on the new art, and if the response seems negative than the old versions may keep much of their old value or continue to rise over time. If the response seems positive, or if the art is exactly the same, then it will depend on the card whether the old version will go up in the long run or be suppressed by the reprint.

If the art is the same for the reprints, in other words a strict reprint, my thoughts will differ depending on the card. This is what I think will happen to prices if the art stays the same.

Akroma, Angel of Wrath – Stable price. Still hold onto Akroma for the fact that she is an angel even though she has arguably been outclassed in recent memory by other creatures. Angel collectors are gonna collect and this card is no exception.

Liliana Vess – Price decrease. Along with M15, Liliana Vess is getting yet another reprint in the anthology. I realize that this is a foil version but the market is about to get mass flooded with M15 and then again in December once people start busting open these anthology packs and selling the individual decks. Regardless of art, there are just too many copies out there to justify holding this one.

Jace Beleren – Stable price. Outside of the book promo, this is the next most popular foil version of Jace Beleren. I attribute this popularity to the unique card art of this version because it shows Jace with his hood down versus the other two Beleren art pieces where he is shown hood up. I don’t expect this version’s price to drop much, if at all.

Garruk Wildspeaker – Price decrease. Garruk isn’t nearly as popular as our boy Jace, and this Garruk was printed more than Jace so there are even more of them out there. He’s only around $8 right now and I definitely think that could lower once more are introduced into the market.

Counterspell – Stable price. Counterspell is one of those weird commons that never gets cheaper and seems to maintain its price over the years regardless of reprints. Counterspell has a billion printings and still manages to hover around $1 NM for a common. The only reason that JvC Counterspell is $8.50 is…that’s right, because Jace is in the art. With even more copies of Jace art being printed it will only go down from here.

Chandra Nalaar – Stable price. The only reason I think it will stay stable is because Chandra Nalaar from the duel deck is the only Chandra with different art from the original Lorwyn version. In addition to being foil, the art is fantastic for the JvC version and I think this will buoy the price.

Daze – Price decrease. Common with the same art as Nemesis that isn’t a foil. Expect a significant price drop.

Imperious Perfect – Price decrease. Non-foil version with the same art will drop the price, at least for a little while. Casuals love elves and this card will sustain a $5 price tag in the long run regardless of the three printings it already has. I think you sell now, pick up Perfects once the EvG duel deck is reprinted and then buy back in at the new lower price. Then just wait for it to climb back up again.

Reya Dawnbringer – Price decrease. I don’t think older copies will dip below $4, especially the Game Day Promo, yet the new version isn’t going to be worth that much based on the Conspiracy reprint price. She just got reprinted in Conspiracy and can barely sell for $1 on TCGPlayer. I don’t think the DvD reprint will be worth $4 like the older versions.

Wirewood Symbiote – Stable price. This is a great card in the Legacy Elves deck, which players might get interested in building if they decide to pick up the EvG duel deck anthology reprint. I have a hard time believing it will fall below $3 retail though if it does I am going to scoop up as many copies as I can.

Luminous Angel – Stable price. Players clearly prefer the DvD art to the Mirrodin art based on TCGPlayer averages so if the reprint art is the same I don’t see her moving from $3 retail.

Heedless One – Price decrease. The only reason the EvG copy sells for $3 TCGPlayer average is because it is much rarer than the Onslaught version, which sells for $1.50. I don’t see this card ever dropping below a $1 due to casual demand but the original EvG copy will drop in price due to this reprint.

Elvish Promenade – Price decrease. Elvish Promenade might be worth more than Heedless One however the price will still drop to around $2 or so with the new reprint. It is an uncommon that has three printings so price is partially propped up by rarity. Like Imperious Perfect, pick up after the reprint and wait for it to go up slowly over time.

Goblin Ringleader – Price decrease. The EvG copy is around $3 right now, so like Promenade and Heedless One I can see this one going down to $2 as well.

Wirewood Lodge – Stable price. This is a favorite addition to Elf decks and being a land is pretty powerful. I don’t expect the price to move much if at all.

Magma Jet – Price decrease. Already has a ton of printings and just got a reprint in Theros. I don’t expect this to be more expensive than the Theros copy which is around $0.60 TCGPlayer average.

Siege-Gang Commander – Price decrease. The EvG foil is only $3 TCGPlayer average so the reprint is only going to suppress the price. Siege-Gang is a great card but it also had three printings besides the duel deck.

Rancor – Stable price. One of the top casual card aura’s, yet unfortunately its price has been hugely suppressed already by the recent M13 reprint. I don’t see the price up going up though at the same time I think that casual demand will prevent the card from dropping in price.

Twilight Shepherd – Stable price. Again, angel creature type so the casual demand is there. I don’t think this is going to move in price.

Fact or Fiction – Stable price. Just like Reya, the price can’t drop lower than $0.50 to $0.60 for this uncommon but only because it was just reprinted in Conspiracy. Not a reason to move your copies or acquire more.

Ambush Commander – Stable price. It’s only around $1.50 to $1.75 so I don’t think it is going to go lower yet you don’t want to buy in because I don’t think players like their lands being blown up once they become creatures.

My two cents on the upcoming Duel Decks Anthology. Leave a comment letting me know what you’re watching from the set or if you’re planning to get rid of anything before the release.