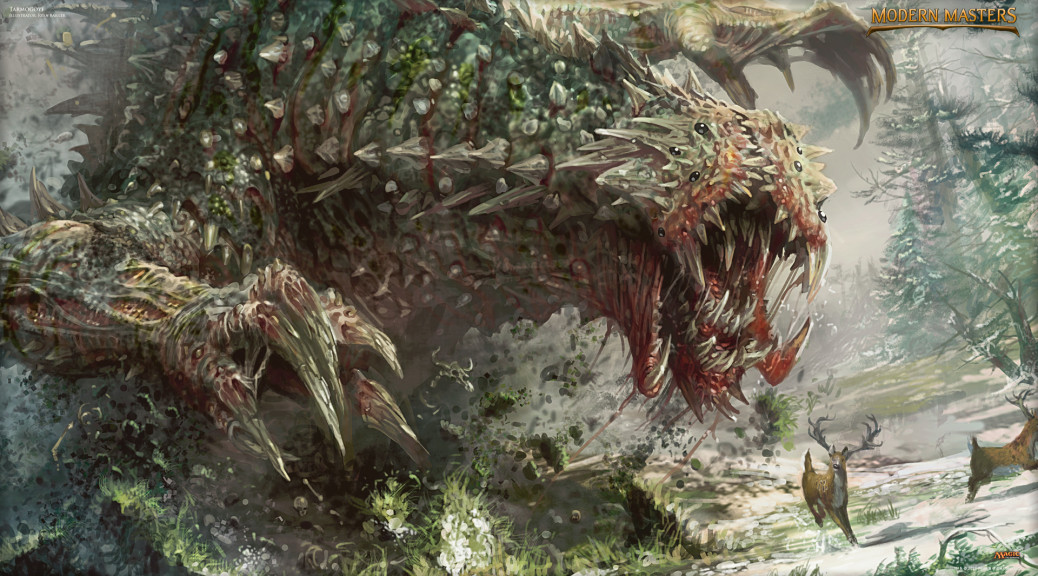 If there’s one word to describe that events of that unfurled at #GPVegas, it’s Tarmogoyf. Tarmogoyfs were the talk of the weekend from basically any angle you could possible consider. Players wanted to buy, sell, open, and trade for Tarmogoyf.

Twitter exploded with Sam Black leading the battle cry against being able to drop before passing sealed pools. Some people feel very strongly that sealed pools are sacred and that you should HAVE TO pass a Tarmogoyf, a FOIL Tarmogoyf, or any combination there of.

Realistically the rule change was put into place to alleviate the logistic nightmare of players “just walking off” with their sealed pool after opening it. Even if the punishment for this crime was a six month ban from competitive Magic, for the average player $250 is more than they’d win during that amount of time anyway. The calculus gets even better at multi-Goyf / Mythic combinations.

If judges had to check empty seats vs. registry before pools were passed it would delay the tournament significantly. Taking witness statements from people seated nearby would probably be required, then reports based on those statements would have to be drafted. This is a logistical nightmare for everyone involved so it was just better to change the rule.

The other thing to consider, and this is the biggest point: Magic has been changing rules, procedures, and even card design to minimize the “feel bads” of the game, to resounding success. The feel bads of being FORCED to give away something valuable is way worse than the feel bads of not getting passed something valuable. For 99% of all sanctioned sealed decks opened in the world there is no passing of pools so it is really hard to make the argument that this is something most players should be accustomed to.

If you want to ensure that you’re “passed” money, pay extra for VIP pre-registered pools or we can all pay $25 extra per head and they’ll hire an army of judges to do it the night(s) before.

The room was abuzz with chatter about the judge-registered sealed pool that some lucky savage was going to get with their sleep-in special:

I’m sure there were some other cards in there too…but if that doesn’t get an honorary mention for “winning the GP,” I don’t know what does.

The biggest controversy that’s still causing tremors and shockwaves in the twitterverse is Pascal Maynard’s choice on camera in the top eight. He established himself as a Boros aggro deck with his first picks and faced a conundrum in pack two: he opened a FOIL Tarmogoyf. There are basically three sides to this argument, which is a pleasant departure from the typical two-sided bickering we’ve grown accustomed to:

As of writing this article, Pascal has placed the Tarmogoyf in question up for auction on eBay and has promised to donate 50% of the proceeds to Gamers Helping Gamers, a scholarship fund for gamers. There are very few individual cards in Magic’s history that have their own story, so this makes for a unique collectible and supports a great cause. If you’re a high roller, throw some weight at that auction… if you’re a low roller but want to help out, check out Gamers Helping Gamers and donate what you can to a great cause. As of writing this article, the auction sits at $3250… half of which goes to a great cause.

The Other Side of the Table

I’d like to include this in future articles regularly as I’m working events; being on the other side of the table gives you a lot of information about how people feel about certain cards. Seeing “the spread” between effective buy prices and sell prices can give a lot of insight into a card’s trajectory.

Working as a buyer you get a lot of people just shopping around a few or single cards to sell. If there was one question that was asked more than any other this weekend if would have been:

What are you paying on Tarmogoyf?

If there were two questions that were asked more than any other questions this weekend it would been:

What are you paying for Tarmogoyf?

What are you selling Tarmogoyf for?

These questions permeated our ears for the entire weekend, it turns out for most of the Grand Prix that we were paying the most for Goyfs and selling them at the best price. On Thursday and Friday there were two kinds of Goyf people: the people that sold Goyfs to us and people that didn’t sell their Goyfs.

What’s this mean for you? It’s likely that Tarmogoyf has likely scraped bottom already. Being the highest price in the room forced other vendors to pay more or take home no Tarmogoyfs at all. The number of vendors that thought they were clever offering $80 a piece for Tarmogoyfs was comical, but eventually they had to compete for cards or go home empty handed. As news of buylist prices going up made ripples across the internet, the market price for Tarmogoyf solidified and has already begun a slow recovery.

If you did not have Tarmogoyfs and were hoping to pick them up in the double digits – sorry about that!

Hot Cards of the Weekend

Bob is back. We bought a TON of Dark Confidants this weekend, we also sold a TON of Dark Confidants this weekend. There were multiple points throughout the weekend, especially Saturday and Sunday that we were completely out. We can thank the recent success of Jun(d/k) in Modern for revitalizing a card that was in a complete death spiral. I’m pleasantly surprised to see this card curve out from flying straight into the side of a cliff and plummeting to the canyon floor below. This just goes to show that you can’t keep a good card down.

Monastery Mentor was noticeably absent from binders all weekend, and the price to pry those bald bastards out of the pages was significantly higher than in recent events. People are finally figuring out how to capitalize on this creature’s incredible abilities and a 50% increase in the buy price reflects that. I expect to continue paying more for these cards in the coming months and through rotation as much of this card’s success is tied to non-rotating formats. I especially like FOILs of this card going forward… but water is also wet.

The biggest surprise for me this weekend was Bitterblossom. People really took to this card over the weekend and it was another one that we could hardly keep in stock. I’ll confess that I don’t really know where all these Bitterblossoms are going, whether it’s a tokens deck or if people really want to play faeries all of the sudden. Whatever the reason for their popularity, people gobbled them up almost as fast as we could get them in stock.

Of the cards hardest hit with reprints were any of the legendary creatures: Iona, Elesh Norn, Kiki-Jiki, Emrakul, Kozilek, and Ulamog especially took a pretty severe beating. The buy price for these dropped down all weekend long and most people just seemed happy to be rid of them. One Kozilek is awesome, but two is purely excess. Ulamog faired even worse thanks to his (her?) cameo in From the Vault: Legends; even with a limited release, this set left a lot of festering stinky tentacled Ulamogs floating around the wild and nobody wants that. Emrakul is the most likely to rebound as it is the defacto creature to sneak into play, at least until Battle for Zendikar when we see a new version showing up.

Karn Liberated’s new lower retail combined with his inter-planar domestic partnership with Ugin has stirred some investment interest in Urza-Tron staples; we had a lot of interest in Wurmcoil Engines throughout the weekend. Even the Commander printing of this card was hot for most of the time that I was helping out on the sales side of things. This deck’s positioning as Paper vs. the Rock decks in Modern is another obvious reason for Tron staples to become more popular as Jund and Abzan continue to put up results.

I might have been wrong about Collected Company. More accurately, I was wrong when I tried this card out in Modern alongside Congregation at Dawn. Collected Company was extremely popular all weekend long and the majority of people that picked these up were buying full playsets, while it’s no real replacement for Birthing Pod…I guess it will do in a pinch. I fully expect this card to come crashing down pretty hard in the coming weeks for a number of reasons:

If you’re not playing these over the next few weeks, then you should probably trade them away and rebuy when the price bottoms out.

I want to thank everyone that took the time to come up and introduce themselves at GP Vegas this weekend, it’s always great to meet the people that enjoy what I create and am glad to have met you all.

I also got a chance to hang out and chat with fellow writers that I haven’t yet had the chance to meet: Corbin Hosler, Jason Alt, Travis Allen, and DJ Johnson… these are some pretty swell fellas and glad to be on board with all of them. [Liar -ed]