For several years, Magic players have consistently placed a premium on trading into “Legacy Staples”: cards like Force of Will, Lion’s Eye Diamond, and any Dual Lands. The appeal was that even if you didn’t have an immediate outlet for the card, its value was very secure – particularly if the card was on the contentious reserve list. This practice contrasts with a policy of picking up Standard staples, which are prone to frequent and occasionally violent shifts in price. Trading for Modern cards leaves us in sort of uncharted territory, however. On the one hand, price swings downward are less frequent and less rapid than in Standard. On the other, there is no reserve list, so the threat of reprint hangs heavy over the head of every card. Modern is a field ripe for investing and profit, but it’s important to minimize our risk in a field fraught with uncertainty.

This week I will discuss potential hazards in Modern trading, and next week we’ll evaluate safe options.

Our goal is to identify targets with increased chances of being reprinted, as that is something we can attempt to predict and will allow us to minimize any potential losses. There are a few critical factors when considering reprints: keywords, ties to specific flavor, adaptable mechanics, and general utility.

Cards with specific Keywords are much tougher to reprint. Something like Chord of Calling can’t show up in a core or expansion set unless the set also contains Convoke, and repeating keywords happens rather infrequently. Additionally, once a keyword’s presence in a set is known, you typically have some time to ditch excess copies before a reprint is confirmed. This leaves only supplemental product as an unpredictable potential pathway for more copies of the card to appear: GP Promos, Modern Masters, Planechase, PT Promos, etc. Cards without keywords can be slotted into new sets, allowing them to theoretically be part of any group of cards Wizards lets out the door.

Flavor
Similarly, cards with ties to specific flavor are much tougher to reprint. Inquisition of Kozilek has the mechanics of a French vanilla discard spell, but the mention of Kozilek means that it can’t appear in an expansion or core set unless that set has something specific to do with the Eldrazi. I’m guessing it’s still probably a little early for their eldritch return, so like keyworded cards, unique flavor mostly restricts reprints to special print runs.

Common Use
The oracle text of the card matters as well. How universal is the card’s effect? Path to Exile has nothing in the rules text that could be tied to specific block’s mechanics. This card is a mono-color instant that references creatures, exiling, and basic lands, which are all things that are in every block. 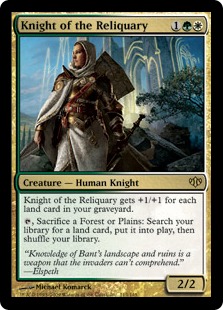 Knight of the Reliquary, however, while lacking a distinct keyword, clearly needs a very particular environment to be reprintable. Wizards isn’t printing a creature who so clearly incentivizes you to pile lands into your graveyard without a method by which to accomplish it.This is exactly why we saw her adjacent to the fetchlands (and why her price didn’t skyrocket until we did.)

Usefulness
Finally, how useful is the card? Is the effect something that has been historically universal, or does it have a very narrow application? A card like Blood Moon would have been fairly low-impact in Innistrad, as there was nothing particularly unique or degenerate about the manabases at the time, but would be a huge role-player in a Shockland-dominant format where basics are few and far between. In contrast, Dark Confidant is going to be Dark Confidant so long as there are black cards and life totals, irrespective of the format around him. It’s feasible they could craft a Standard format where he isn’t very good, but I don’t think it’s a world any of us want to live in.

Look at these four factors when considering whether a card is likely to be reprinted, and invest wisely. If the card has no characteristics that make it resistant to reprinting, tread carefully, especially if the card has seen a spike in price recently. Large and rapid increases indicate a high price volatility, which indicates that the card’s value can be easily swayed. If nothing more than rumors, perceived scarcity, speculation or a single event is driving severe changes, then it has yet to find a stable price, and a sudden influx of copies could have a dramatic effect. This is in contrast to real estate like a Dual land, whose value is far more insulated from current events and is unlikely to shift by too many percentage points at any given time.

Next week we’ll look at what types of targets are considerably safer, and may even see upside from being reprinted.

By the way, know what card carries not a single marker that would inhibit reprinting, has doubled in price fairly recently, is heavily represented in the Twitter rumor mill, would have its power level tempered by a shockland format, was in a small card pool that Wizards has specifically identified as wanting to provide increased accessibility to, seemed an ominous omission from Modern Masters, and is at an absurd price for being a no-nonsense utility card? Thoughtseize, with a current Fair Trade Price of $69.

3 thoughts on “How to Dodge Hazards in Trading Modern”