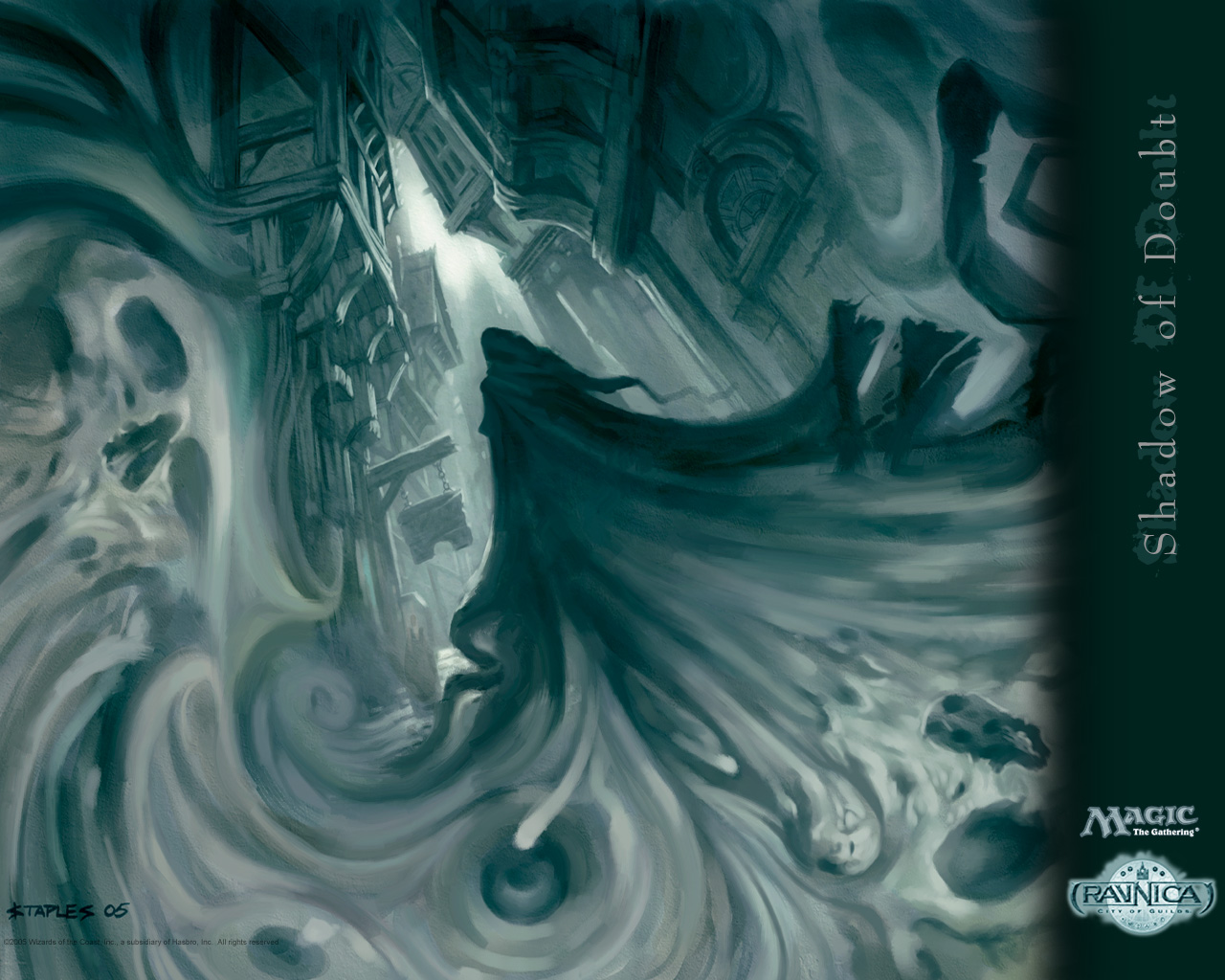 Another weekend, another major Magic event. This time around, it was the World Magic Championship. I was rooting hard for Reid Duke, and I’m nearly positive I was more upset at the Engineered Explosives in Shahar’s opening 7 in game 5 than Reid was. Still though, it was a great finals with plenty of tense moments. Many (PVDDR) were dismissing the match due to Aura’s perceived lack of interactivity, complaining it would be boring to watch. What we were treated to instead was an exciting match between two skilled players, with a lot of drama in what draw steps would herald and whether Shahar could win the race. My biggest complaint, beyond Reid not winning, is that he reminded everyone that Auras exists, a deck I was planning on playing at GP Detroit. Back to the drawing board, I suppose.

My first impression while reading through the Standard lists was just how boring they are. When players work together in a team prior to a major event like a Pro Tour, it’s good for everybody involved. They do great jobs of finding the best decks, and we get to see the real power in whatever format they’re playing. There are a lot of Pro Tour players that aren’t in pro superteams though, which leads to a lot more variety of brews (good and bad) showing up. At the WMC however, there are only 16 players. A team of 5 people consists of nearly a third of the room. The result of the players forming these teams was a homogenization of the event: there were five Jund decks and eight UWR Flash decks in the Standard portion. That means a little over 80% of the room was playing one of two decks. That makes for a very bland looking Standard scene, regardless of whether the true format is more diverse. Even Jon Finkel noticed, taking to Twitter to vent his frustration about how Wizards had seemingly phased out many unique deck types such as combo, land destruction, hand disruption, true control, etc.

Financially, basically nothing came out of the Standard portion. It served only to reinforce the staples: Sphinx’s Revelation, Supreme Verdict, Jace, Scavenging Ooze, etc. I don’t think we’re going to see much of anything new or noteworthy in considerable competitive play until rotation. I’m guessing it will mostly be a lot of tweaking of existing archetypes. Brian’s GR beatdown deck was the only Standard deck that was a departure from the norm, but all the financially-relevant cards are already known suspects, so there isn’t much to work with there either.

The more actionable data was found in the Modern portion of the event. The most significant finding was the prevalence of Scavenging Ooze. A full 22 showed up between maindecks and sideboards, which is about 33% of the maximum amount of Oozes that could have appeared. You’ll remember that a few weeks ago I told you how good Ooze would be in Modern. I don’t expect this to be a passing fad either. SCG has jumped their buy price to $12.50, and is currently sold out at $25. The Ooze is here to stay, so get used to it. The ramifications of this will be widespread. One impact will be just making it tougher and tougher for graveyard strategies in Modern. 4x Deathrite Shaman and 4x Scavenging Ooze is going to be the start of so many decks in Modern that showing up with Vengevine, Demigod of Revenge, Life from the Loam, or really anything with considerable graveyard interaction is just asking to 0-3 drop and get food.

Aside: Keep your eye out for any card that gets printed to help protect your graveyard. Think along the lines of a bear that while in your graveyard gives the whole thing hexproof or some such. Wizards may realize they’ve pushed too hard on graveyard hate, and not wanting to blank so many cool cards, may provide some resources for those types of decks. This type of card, if properly powerful, could quickly become a strong card in both Modern and Legacy, but would likely not carry a high price tag during prerelease season.

Other than Scavenging Ooze, I really like Horizon Canopy right now. The card is a fantastic land for any deck that wants to make green and white mana as well as attack. It’s a land that makes both of your colors right away, it helps combat mana flood, it’s used in Legacy, and it’s a Future Sight rare. Grove of the Burnwillows had a second printing, is arguably not as good, and is still $20. The rares in that set have proven that they are completely capable of going wild, and staying there. Case in point:

Horizon Canopy has been ticking up slowly for quite some time, currently at about $14-15. I wouldn’t be surprised to see it jump like Chord of Calling did at some point. $35+ may be a stretch, but $25+ seems plausible. There’s a very small chance we’ll see it in Theros, but if we don’t I expect it to rise the closer we get to Modern season. What makes this particularly safe is that even if it is printed in Theros, it would be with a Modern border. The unique Future Sight border will help the card maintain value even in the face of a reprint. I particularly like Horizon Canopy foils, which could easily be $70-$100+ with a jump.

Financially, the most important but least-discussed piece of information (so far) is the change in the PTQ schedule. Previously, it was Modern at the start of the year, then Standard over the summer, and finally Limited in the fall. Now however, we have this schedule: 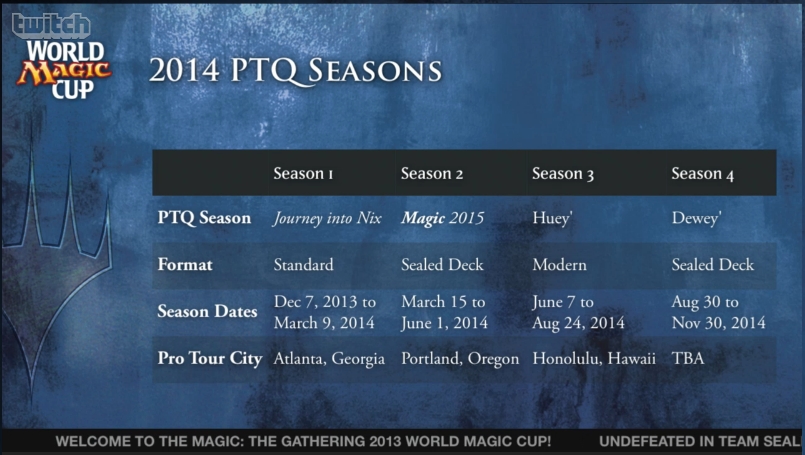 What this means is that starting at the end of this year and through spring of 2014, it will be Standard instead of Modern. Then through late spring and early summer we’ll have Sealed, and Modern doesn’t show up until early summer, where we’ll have it for 11 weeks. Finally the year will finish up with Sealed again through late fall.

The first major change to consider is the delay of the Modern PTQ season. Originally, we all expected it to start around January 1st or so. This meant that between now and the start of the season, we only had to worry about what was in Theros and the Commander product this November, as well as perhaps any spoilers that slipped out ahead of time. Now though, Modern doesn’t start until June of next year. That is a long ways away, with the entire Theros block being released in the interim, M15 spoilers will be close at hand, and most germane, spoilers of summer product will be available. In fact, do you recognize the date of June 7th from anything else? The Modern Masters release date was June 7th, 2013. The Modern PTQ season begins exactly one year later. This is no coincidence. I bet dollars to doughnuts that we will have or at least will have heard of another Modern supplemental product by then.

The obvious impact of this is that our Modern holds are far more tenuous than they were before. Whereas Fetchlands were an absolute hold before, that is much more in question now. There is a lot of time and a lot of product to go before the PTQ season finally rolls around, and a lot of opportunities for the lands to be printed again. Wizards isn’t going to be turning a blind eye to the most prevalent lands in the format being this expensive. They have shown an eagerness to go after high-value Modern staples already. The rise in price of Tarmogoyf and Dark Confidant was a byproduct of Wizards printing too few boxes, a move they have already explained was meant to be overly cautious. I do not expect them to be quite so prudent next time. They now have the data in front of them, and they can more accurately gauge how many boxes they should print of any future Modern product.

Hint: it’s going to be more.

The question then becomes what to do with our Modern holdings. To be perfectly honest with you, I’m still a bit undecided. I’m not rushing out to sell them today, as the threat of additional copies won’t begin to creep up until after the first of the year. It’s really next spring we need to worry about. At this juncture, I am planning on holding until after the first with the calculated risk that they likely won’t go down by then, and have the chance to climb a few more dollars. I’ll probably ditch them in January though, happy to take my profits and unwilling to brave whatever spoilers the spring months may bring. It’s entirely possible the Fetchlands don’t see another printing cycle before the next PTQ season and they all hit $70+, but I’d much rather get out at $30-50 each in January rather than have them show up in MM2 and sell at $20 in July.

The other slightly less drastic result of this schedule change is that there is no longer a Standard PTQ season to keep rotating staples afloat over the summer. Once March 9th rolls around, Ravnica-block Standard staples will quickly begin to decline as PTQ grinders sell off their copies that they no longer need, whereas in the past they would have held them right through till rotation. Expect Standard prices to deflate sooner and faster this coming year than they have in the past.

Two last parting tips this week: Fellow financially-minded writer Corbin Hosler (@chosler88) pointed out on Monday that Shadow of Doubt has quadrupled in the last several months. As an original Ravnica block rare, it could easily climb to $10. The card also has hybrid mana, making it tough to print outside of supplemental product. If you can grab these under $4, they seem quite safe.

And finally, Sen Triplets. This card is now pushing $14. Did you know that?