The process of trading, buying, and selling Magic cards clearly revolves around one thing: prices. How much is that card worth in trade? How much would you sell it for? How much can I sell this for if I pick it up in trade? How much should I offer that guy on his collection? So on and so on. Today, I’ll show you some of the websites I use in my daily operations to equip myself with the best knowledge I can. And after all, Knowledge is power.

Starting with the obvious, MTGPrice provides a clear answer for finding the current price of cards. As a price aggregator and not a direct retailer, MTGPrice’s reported numbers will align with true market value far better than single retail sites. By looking across a variety of vendors, the site is able to smooth out occasional absurd prices from individual sites.

MTGPrice also has the unique function of providing price history information, which can be highly valuable at times. Sometimes when trading you are not quite as curious about the value of a card today, as much as you care about what it was and will be. There are times where you can’t remember if a card has been falling or rising recently, and you want to be sure you’re on the right side of that slope. I find this feature particularly useful when looking at considerably older cards whose prices I don’t have a perfect recollection of. Being able to look up something like Ancestral Visions will tell you which direction it’s heading, which makes a big difference when considering whether you should take it to balance out a trade deficit. 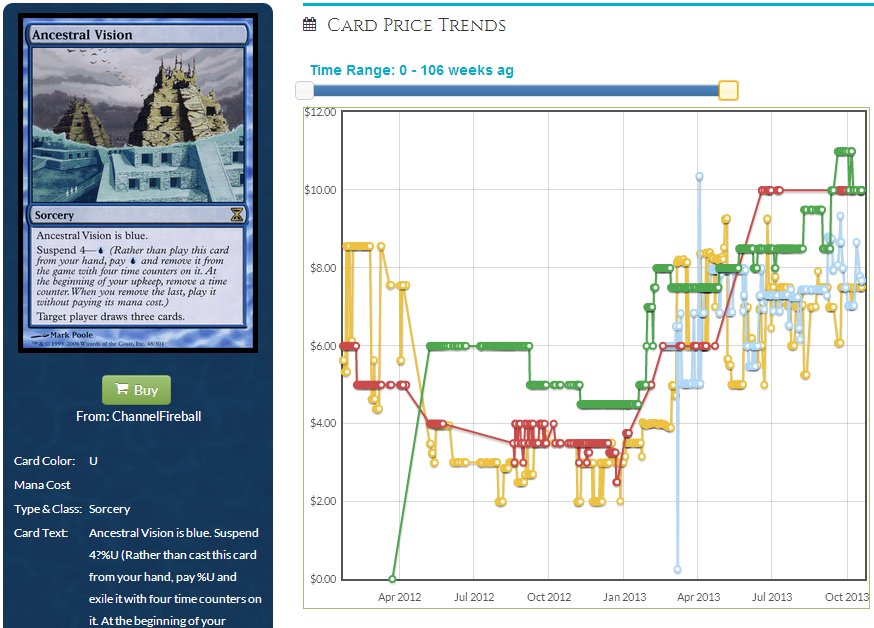 Built as what amounts to a minimalist-influenced GUI for the assaulting aesthetic of TCGPlayer, I’m a big fan. It is the fastest loading Magic card site I have found, you get a big crisp picture, easy-to-access alternate print history, and the raw volume of TCGPlayer prices without having to slog through their laborious interface.

TCGPlayer’s data is useful, as they track nearly every major online retailer. The most interesting aspect of TCG data is that they recently added the ability for private sellers to function as storefronts. These are going to be your hardcore binder-grinder types that have a massive rotating collection, but don’t want to be bothered creating an actual web presence. With the addition of individual sellers, the prices are going to move much faster than a standard web store, find floors quicker, and occasionally be willing to operate on smaller margins.

The biggest pitfall of magiccards.info is the less-accessible data on foils, and often even more lacking, promo prices. Finding prices on foils is not too hard, although it’s not immediately visible. Here’s how I do it:

From what I can tell, the reason promos are so hard to aggregate data on is because stores classify them differently. For example, promos such as Voidslime are sometimes listed as both “Near Mint Foil” – because its foil – and just “Near Mint;” since all copies are foil, they don’t bother being explicit. For many promos, you’ll have to venture elsewhere. 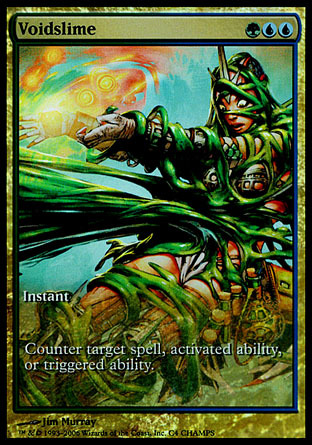 A note on identifying prices from TCGPlayer in general: You’ll notice that unlike something like MTGPrice or SCG, there is a long list of numbers when you check out the prices on TCGPlayer. Those numbers are boiled down into low, mid, and high. It’s common for some people to just jump straight to the mid price and use that as the trade value. While that isn’t an unreasonable approach, it does have the the flaw of being unlikely to adapt to rapid market changes as quickly as the low value does. If a banner mythic such as Purphoros drops $10 in the week after release, the low will move $10 because the invisible hand of the market will push the ambitious to race to the floor of the card. However the lazy and greedy may leave their price at pre-drop prices, resulting in a huge disparity. Check out the FTV Lotus Petal and you’ll see that the gap between the low and the high is pretty narrow, as the price has settled comfortably. The reported gap on Purphoros is $20 though – more than double the low price of the card!

My strategy when divining prices from TCGPlayer data is more heuristic-driven. If I’m ever unsure of a fair value, I’ll pull up the full list of prices and start looking for playsets. At the moment, there is a NM copy of Chandra, Pyromaster available for $24.50. The first price at which there are multiple sellers in a row with multiple copies available is $29.99 though, which I would treat as her fair trade price. (The mid is reported at $33 – buoyed by an absurd $48 high.) (Also keep in mind that while I may identify her fair trade price as $30, it does not necessarily mean that’s how much I plan on trading her away for.)

I find myself wanting to call them the Amazon of Magic, but given that Amazon typically has great prices, I’m unwilling to make this comparison. SCG is undoubtedly the de facto standard as far as single-vendor pricing goes. It’s a very popular resource to use among those that are less dedicated in the financial arts. I personally dislike using SCG during trades for a few reasons:

Regardless, Starcity does have its uses. I find myself using them most often for promo cards, such as the recent Nighthowler Game Day promo. While you certainly need to take the prices with a grain of salt, at least they give you an idea of whether the card is $3 or $30. They’re also acceptable for finding prices on things like sealed product.

Ahh, eBay. Everyone’s least favorite way of selling cards. Between 10% fees from eBay, 3% fees from the nigh-unavoidable PayPal, and what seems like more buyers that are out to scam you than not, “minefield” is too kind a comparison. As miserable as eBay can be for selling though, it is at least a useful resource for pricing information. eBay is best suited for things such as very obscure cards like Foil Russian Tidespout Tyrants, promos you can’t find in stock elsewhere, and most importantly, cash values.

The cash value part is important because eBay is unique in this function. Whenever I’m discussing purchasing cards directly from another player, eBay is my first stop. The “Completed listings” option will show you how much previous auctions have sold (and not sold) for, providing you with valuable information regarding a ceiling for your offer.

It is not uncommon for many cards to have wild discrepancies between trade and sale. Ghost dad sells on eBay for only $2-$3 less than he is on MTGPrice, whereas Horizon Canopy – $39 on MTGPrice – has plenty of completed listings for around $21 a copy. Whenever there is cash involved in a deal, make sure to stop by eBay to identify the card’s cash value.