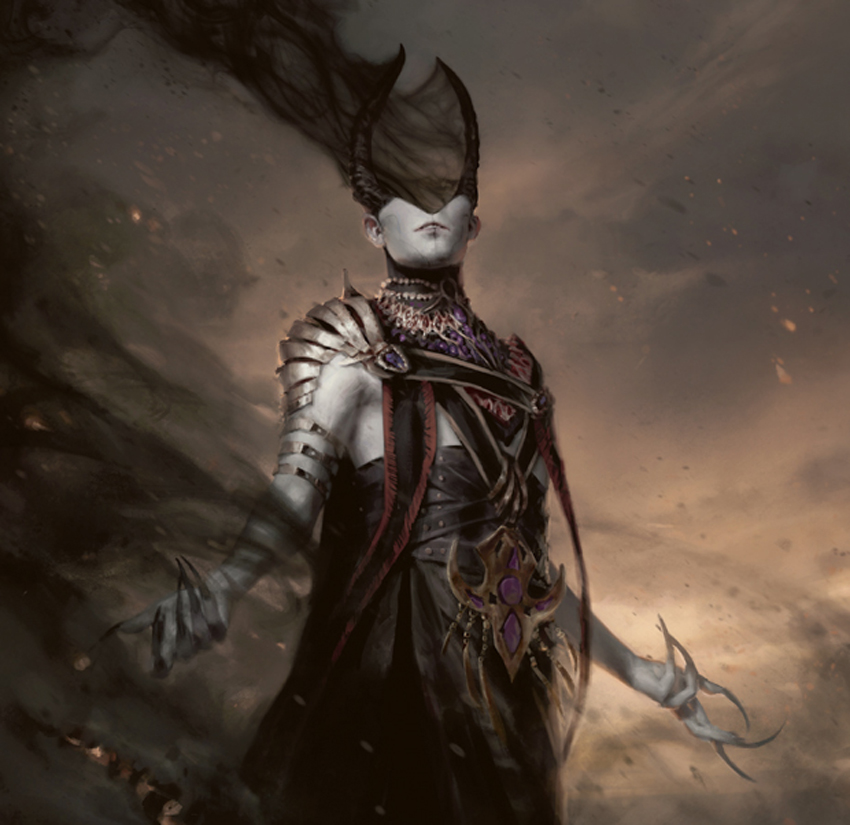 This week I would like everyone to take the opportunity to check out the the MTGPrice 50 biggest gainers and losers of the week. I like to utilize this page in order to keep on top of weekly trends for Standard cards because Standard tends to be the most volatile format from week to week. By having an easy-to-reference list, you are able to clearly spot trends that you may otherwise miss just watching an official Wizard’s stream, Starcity live stream, or becoming occupied reading the countless other deck tech articles that exist. 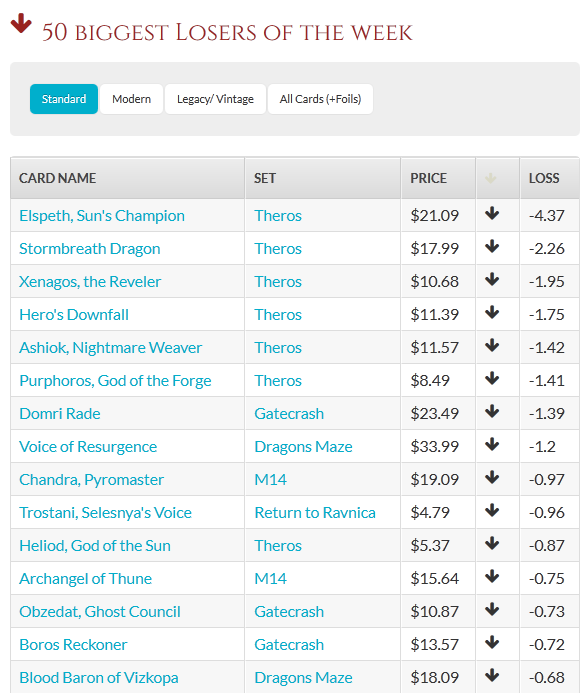 In the top 15 losers of the previous week, 13 out of the 15 are mythic rares. The other two cards in the list are Hero’s Downfall and Boros Reckoner. Hero’s Downfall is experiencing a price drop because more and more Theros packs are being cracked, so copies are entering the market every day. I will remember where Hero’s Downfall ultimately settles because it will be a good indicator for similar removal in the future. Since Wizards seems to be moving much of the good removal to the rare slots rather than uncommon, it will be important to know what to expect. Boros Reckoner is experiencing a shift downwards this week because it is seeing less and less play in Standard as the metagame moves away (at least for now) from red based devotion. Both blue and black devotion prevent Boros Reckoner from reaching his full potential (battling in the red zone.)

Outside of the two rares that made a guest appearance, I would like to draw your attention to a phenomenon I am calling “the mythic downgrade.” This event happens a few months after a set release, during which the mythics in Standard are currently being oversold and the market is in the process of readjustment (due to several factors, which I will elaborate on). With 13 out of the top 15 losers being mythic this week, it’s clear the mythic downgrade is in full swing.

Elspeth has received a downgrade from the previous week mainly because she typically only appears as a single or double. Even though she appears in about 20% of the current Standard decks, she only averages slightly below two copies. With many lists only needing a single copy, there isn’t nearly as much demand to prop up her price, as we see in cards like Sphinx’s Revelation or Thassa.

I expect this trend to continue because she is prohibitively expensive mana-wise for a Planeswalker. The only other Planeswalker that costs six that is seeing play is Garruk, Caller of Beasts, and for green decks that high mana cost can be ameliorated alongside of Nykthos. U/W Control is not making crazy mana like that, and until it does I don’t see Elspeth appearing in quantities of 3 or 4 in decks any time soon.

Alas, my favorite dragon in Standard is seeing a decline in price as well.  As opposed to Elspeth, Stormbreath Dragon regularly sees play as three or four copies in the same deck, so that isn’t our culprit. The reason that Stombreath Dragon is dropping (for now) is because of that pesky “protection from white” clause. Not that it’s a bad card, but like I mentioned above, black and blue right now are the colors to beat. Stormbreath Dragon’s pro white doesn’t do much against Gray Merchant triggers and a sea of elemental tokens, so until the metagame shifts to white being a dominant color again Stormbreath Dragon will continue to see only moderate amounts of play.

Ah, Xenagos – the Planeswalker spin on Gaea’s Cradle. In my opinion, Xenagos is so close to being good but is outshined by Garruk. Since Garruk is mono-green, he is much more efficient in devotion builds as he is so much easier to cast with all green mana from your Nykthos activation.  Xenagos has been dropping since the release of Theros because he doesn’t have a deck that really synergizes well with him, unlike Garruk. Similar to Elspeth, you don’t need many copies if you are playing him – two to three at the most. Making free Satyrs with haste is pretty awesome, but I think Garruk will need to rotate before Xenagos will really start to shine. The floor for Xenagos hasn’t approached yet and I would expect him to go lower as more Theros is released.

Ashiok has certainly fallen from the highs that she saw when Theros was first released: 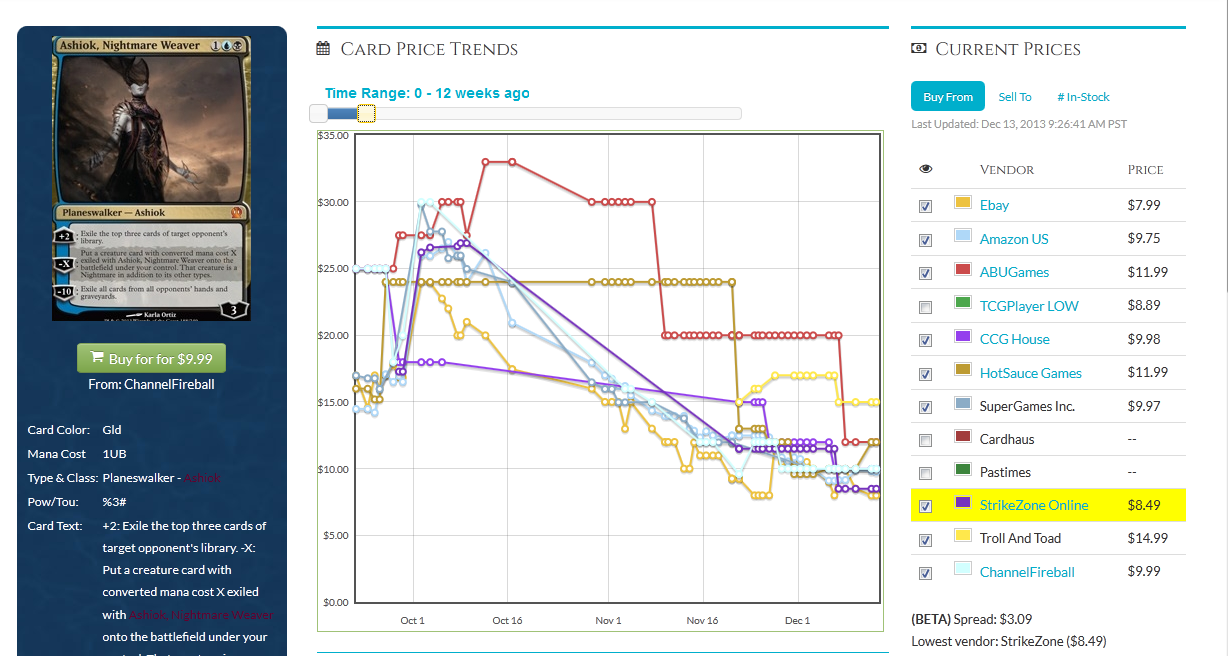 Unfortunately, there just hasn’t been a good deck to fit her into except for Esper control which isn’t even seeing a lot of play right now – Ashiok is currently found in less than 5% of the field. Under the right circumstances Ashiok can be a real beating, but the popularity of the devotion decks has pushed her to fringe play. I would expect the price to continue to go down for a little while longer (since we currently have the blue/black scryland, and even this isn’t enough to make her see play) until a more viable control deck is able to exist in Standard.

Purphoros was talked about last week on this blog, and I agree with the reason for the price drop – a God that has plenty of potential but no way to realize that potential yet. Continue to expect his price to go down until that potential is realized. On the more speculative side, I believe that Purphoros’ floor is not far away and once the price drops down so far as to make you scratch your head – that will be the time to start getting them. Clearly a casual and EDH all star, (and possibly the Gods being the next Eldrazi a few years from now?) in the long term you can’t go wrong.

I’m still reeling from the initial buy-in that I made for Heliod when Theros was first released. I was wrong about his role in the early Theros metagame, and the price has readjusted to show me the error of my ways. Heliod continues to drop from $8 and I expect it to bottom out around $3-$4 the way the price is trending.

However, new sets produce new opportunities and I think that within their Standard life each God will have his or her time to shine. Like Purphoros, Heliod can be a great casual target if you want to start picking them up when they get really low. Just don’t wait too long, because I still have high expectations that one day, hopefully one day, Heliod might be good…

I’ve mentioned both of these mythics in some of my previous articles, but back then I portrayed these mythics in a positive light. Looks like I need to reevaluate my stance on these Standard staples.

For their respective decks, both Domri and Voice are played in droves – hardly do I see a list that plays fewer than four copies of either card. So, why are they going down in price? I believe the answer lies in the fact that those players that want to play Domri or Voice already have them (the cards have been out for far longer than the Theros mythics I mentioned,) and aren’t doing anything particularly new or exciting. Standard has been pretty stale lately, with little innovation of the full 75. Grand Prix Dallas-Fort Worth didn’t give us much good insight either because many players had to cancel their travel plans due to the humongous snowstorm that pummeled the area on the weekend of the tournament. This allowed some fairly crazy decks to get into the top 8 of the tournament such as this R/W Burn list.  So until more demand presents itself for these cards, either through 1. more players wanting to play Standard and the rise of the Magic player community or 2. the establishment of greener deck strategies, it could take a new set to be released before Domri or Voice are shaken up price wise.

All of the cards here have changed fewer than 1% since the previous week, so I will go through them all and see why they have been stagnant.

Chandra, Pyromaster – Chandra has stagnated in price for now because she currently sees play at most as a single or double, just like other Planeswalkers in the losers list. Until she starts putting up more impressive numbers, I don’t expect an increase in her price any time soon. She seems to have leveled off until a new strategy capitalizes on her.

Trostani, Selesnya’s Voice – Trostani has experienced several jumps and dips in price throughout her life in Standard, so her stagnation could signal the beginning of another price dip until a G/W populate strategy shows up again. A great target for the long term, but I wouldn’t expect a huge price jump soon unless G/W populate breaks out with a new set release.

Archangel of Thune – Archangel of Thune has tried to work in so many decks, but at the end of the day it is mainly a casual card which is the primary buoy of it’s price. I would expect Archangel to stay around $15 throughout the rest of its Standard life and increase in price if another strategy next year can fit it into the deck. Otherwise, stay away unless you absolutely must have them.

Obzedat, Ghost Council and Blood Baron of Vizkopa – Both of these Orzhov titans have seen their price increases happen already. Blood Baron went from $8 to his current $18 and Obzedat went from $7-$8 to his current $10 in the fall. Both have flat lined since then. For Obzedat, this is because there are only a few strategies he can fit into well and thus his price is mainly held up by casuals and the EDH crowd. Blood Baron is a tournament staple, so the reason his price hasn’t moved much in spite of that is because most everyone who wants them has them and often he isn’t played as a playset. In control shells, Blood Baron is typically played as a two-of and occasionally you’ll see three, barring B/W Control. As Standard plays out over the next year, I can definitely see Blood Baron possibly going up again. Obzedat, until a better deck opportunity presents itself, will continue to hang out around $10. There is definitely still time for Obzedat to pan out if he can find the right deck though.

That’s a wrap! Hopefully this article gives you some insight to the current prices of many mythics in Standard and why they seem to be dropping or stagnating in price. Also, check out the Top 50 list on MTGPrice regularly so that you won’t be behind the trends from week to week on all the best Standard cards. The list gives you an idea of cards headed in either direction, so keep watch!