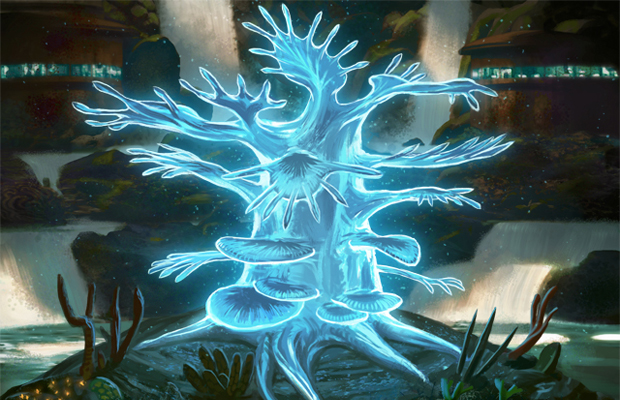 Let us envision a hypothetical in which you bought 100 Mana Blooms.

They were sitting at a comfortable twenty-five cents before the recent hype. You were lucky enough to get in with the initial hype and got in at this VERY low price. This puts you twenty-five dollars in the hole.

The hype intensifies. More and more copies are falling off the market. There’s a lot of buzz around on Twitter and Reddit. This is shaping up to be a very prolific spec!

Look at the results: 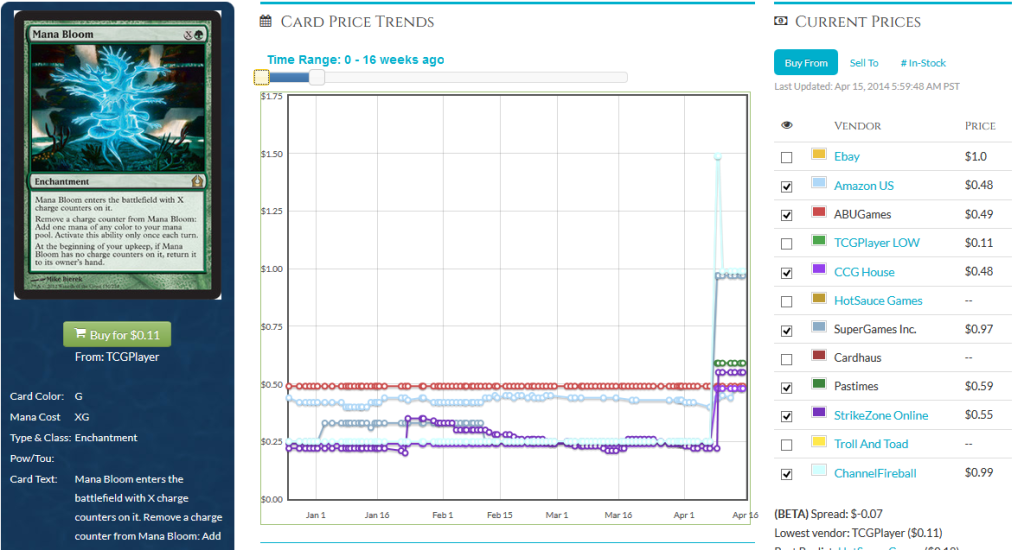 Wow! Look at that. The price doubled. They are even selling them for a dollar on Channel Fireball! It must be time to sell out. 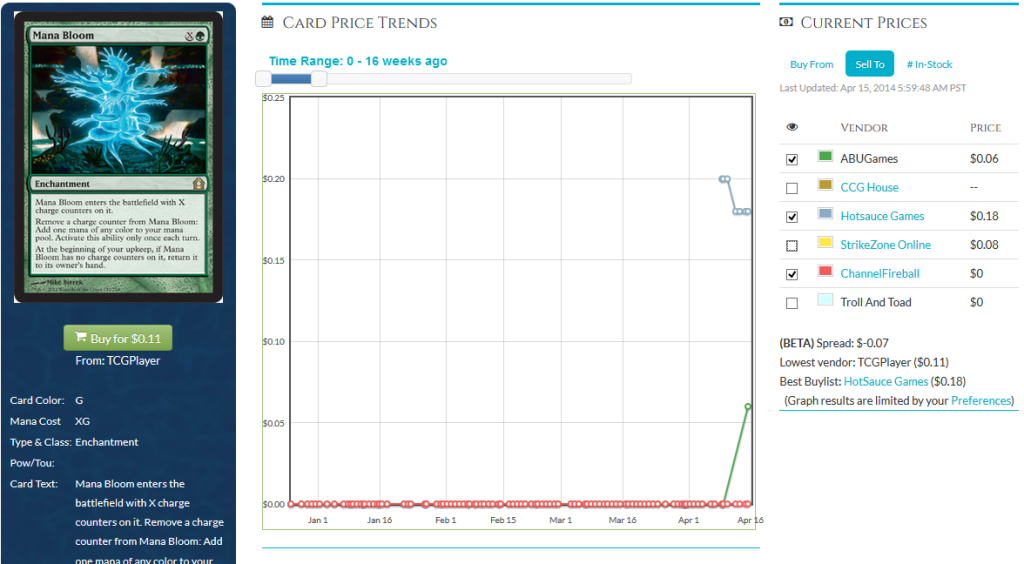 Oh… Those buylist prices are low. The highest one is even less than you paid for each of the cards. No matter. We’ll just list them on eBay! 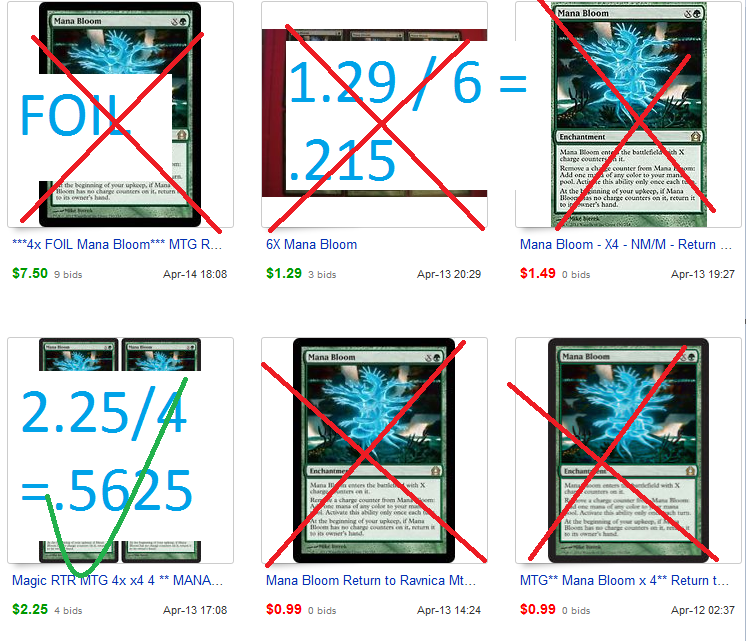 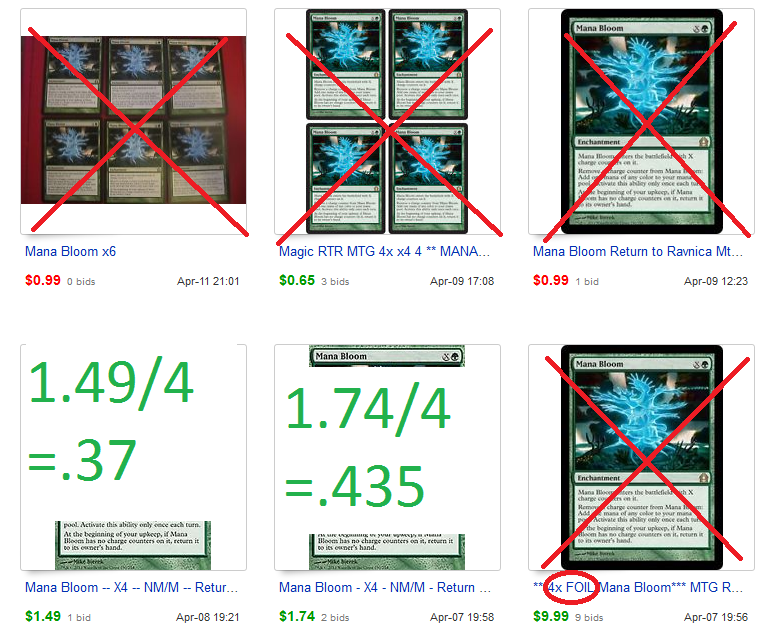 The above are the completed results for Mana Bloom on eBay. It looks like if you posted them after April 7th (approximately right in the middle of the hype), you lost money or didn’t even make a sale. That’s listing fees out the window, not to mention the overhead of having some money tied into this card. Maybe you could have been that lucky guy and sold four copies to double your money…sort of.

The retail prices are not what you will be able to sell them for. Almost everyone knows this. However, the JUMP in retail prices is also not necessarily the percentage you will make. Buylist prices in most cases will not adjust to the hike in retail prices. In fact, most card shops love it when spikes like this happen. It allows them to clear out stock of cards that would never move. Speculators are more than happy to clean out the retailers of their precious junk rares if there’s some buzz.

This plays into the central theme of my article today: the dichotomy of real and artificial demand.

Differentiating between the two could mean the difference between Birthing Pod and Nivmagus Elemental.

What is artificial demand?

Artificial demand comes from those buyers who are not interested in playing with the cards they have purchased. These are namely card shops and speculators. They are buying purely for profit.

Real demand, in comparison, comes from those buyers who are interested in playing with the cards they have purchased. These are casual players, PTQ players, etc. They want the cards and will keep them.

This shows the forces at work within the market and makes Magic cards easier to predict than stocks. Investors in stocks are purely artificial demand. They cannot consume or make use of stocks (except with dividends, still for profit).

Players are simply that: they want to play Magic the Gathering. Many of them spend a large amount of their disposable income on Magic cards. If the cards are being played in the deck they want to build, they will spend for them. Trends, card needs and wants: all predictable.

Let us go back to Mana Bloom to apply this theory.

The hype around Mana Bloom was significant. It was a perfect target for overzealous investors to throw a ton of money at a 25 cent card and hope it rises. Naturally, the card shops adjust their retail prices to reflect the increase in demand.

Let’s be honest: how many of you honestly thought Mana Bloom would become a mainstay of the format like Remand or Cryptic Command or Birthing Pod?

What percentage of potential Modern players would actually put their money into a Mana Bloom deck? I think one percent is generous. Is one percent enough to jolt the demand for this card enough for card shops to want MORE of this card?

It wasn’t enough for demand on eBay to be generated, obviously. Look at all the listings that had zero bids. Can you imagine not being able to offload the card you just paid twenty-five cents for and losing listing fees?

That would drive some people to ship it off to buylists. Those card shops are more than happy to accept the cards back for less than you paid for them.

There are other examples of this as well.

Look at the massive shift in retail price: 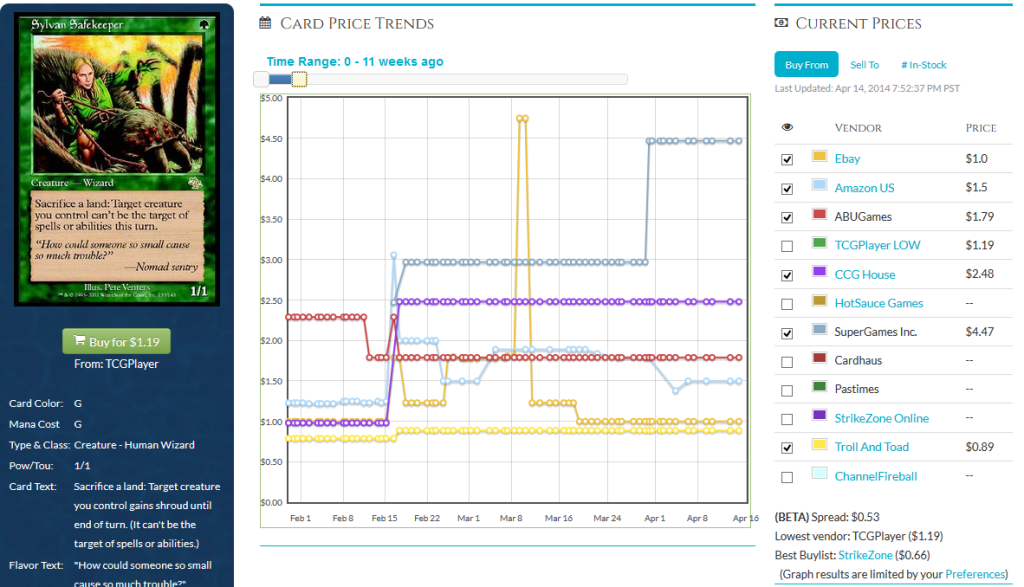 Here’s the not so massive shift in buylist price: 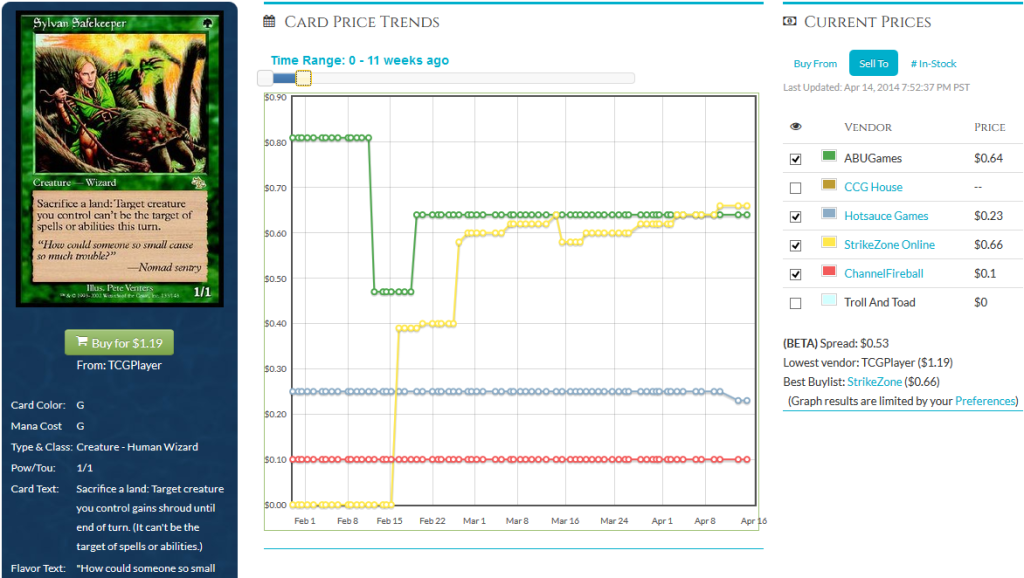 Retailers were more than happy to let you buy their near-junk cards: 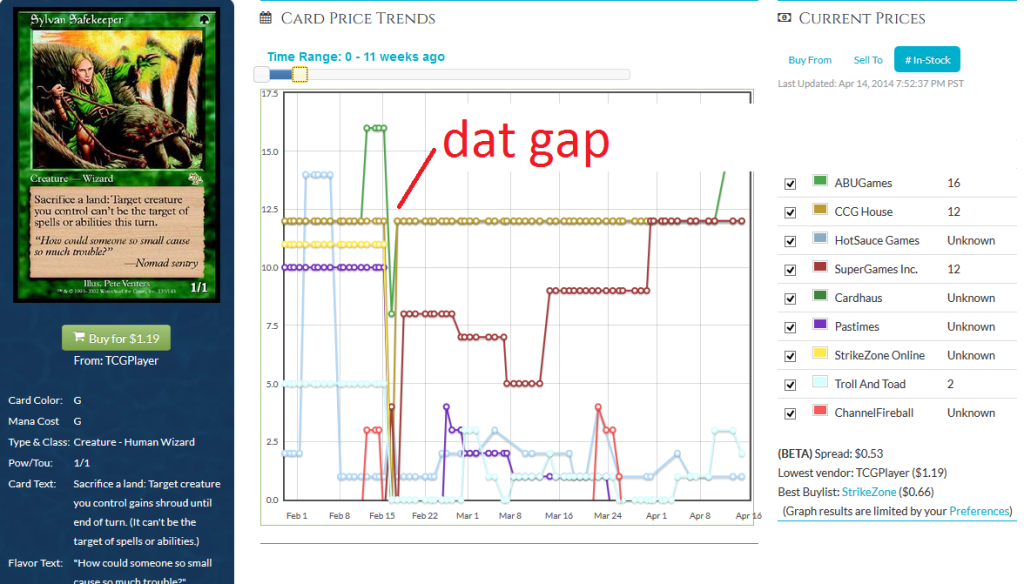 Speculators were overjoyed to have invested in this soon-to-be legacy staple:

@chasandres you’re like a rare breed of ass cancer lol. I bought a dozen 🙂 Love the articles on scg, man. Keep up the great work!

Except it didn’t become a legacy staple. There was just a whole bunch of buzz about the card. Retail prices adjusted, but did anyone who actually plays Legacy want this card?

You know what card is a game changer?

This card was ten dollars for the longest time. That couldn’t last. It is in Melira Pod, which is one of the best decks in Modern.

When the spike finally came, it wasn’t unwarranted. There are real live people who play Birthing Pod decks in Modern! They enjoy playing Magic and paying quite high prices for cards that they need for their decks in the future. The card shops realize this, and adjusted their buylist prices to the artificial demand because, down the line, there will be real people buying cards.

I guarantee I will get comments saying “you are preaching to the choir” or “this is basic stuff, everyone knows this.” If that was true, why do people buy into cards like Sylvan Safekeeper? The inventory drops did not happen for no reason, there were people buying them.

You must take a step back from the hype and ask yourself if the card you are about to purchase will be played and bought by players. If it does not pass the sniff test, it is probably not worth your money.

One of the best ways that I have been able to discern whether cards will pick up steam or not is the buylist spread feature in the MTGPrice ProTrader emails. If the buylist prices are going up, the card shops smell real demand that will have significant ramifications on the market.

There are always opportunities. Now, more than ever, as Modern picks up steam into the summer, there will be massive gains from Modern cards.

Here are my picks for the coming season:

This card has the potential to follow the same trajectory as its cousin, Grafdigger’s Cage. That card nearly doubled. Stony Silence is a white hate card that can be played in UWR and White Weenie decks.

Across the board, white hate cards will have a lot of real demand from players who expect a certain deck at their local Modern tournament. Look into Ethersworn Canonist and Kataki, War’s Wage as potential trade pickups.

This is an uncommon. However, two drops are quite important in Modern. This card has incredible potential for any blue deck. I really like this card as a pickup, especially since some of the Spikes who play in the PTQ scene like to play control decks.

Electrolyze is the logical follow-up to the prediction that UWR decks will have lots of play during Modern season. Spell Snare sees a similar level of play and it is almost twice the price. I am planning to move in significantly on this one as it is extremely efficient for any UR deck.

There has been some significant downward pressure on Remand. I am quite optimistic for its future despite the reprint that is incoming. I would watch this one and pick it up around the time it is expected to see a reprint. This card is played in lots of the blue decks and will be an enduring feature of Modern.

The price of this one will start to settle down over the next few weeks. Lots of people love to play Storm. I could see this one going down before Modern season and then picking up steam to be a 20 dollar card. Keep an eye on this one. I’d buy under 7.

Thanks for reading. I’m considering starting a Modern portfolio and investing about 100 dollars and recording where prices go. Would anyone be interested in that? Message me on twitter: http://twitter.com/CamdenClarkMTG

One thought on “Artificial and Real Demand”