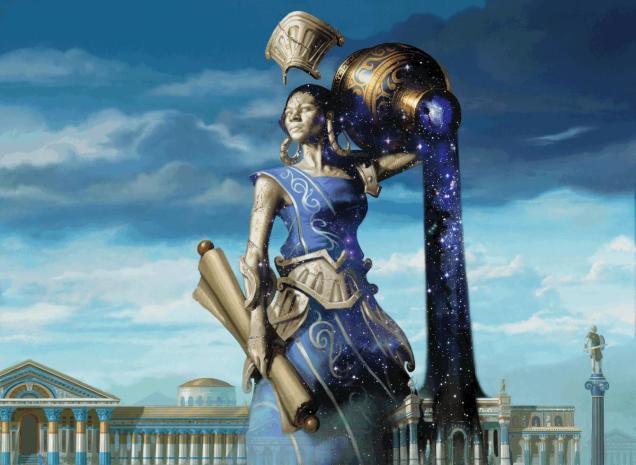 Two months ago, I made a set of predictions about what the Gods of Journey into Nyx would do, and what cards might see a spike as a result.

The results are in, and I’m sad to say I was off in many ways.

We are still in the prerelease mode, and no actual Standard decks have been built yet. The spikes I predicted are still possible, but we’ll see about that over time. For now, I’m focusing on the cards that have gone up in the midst of the hype. As ever, that’s the best time to sell.

What I predicted: It could cost four, and “that this God will grant a bonus to attacking creatures, a la Orcish Oriflamme”

Well, it is a bonus, just a different one. More tricky, less direct. But because it rewards attacking so directly, in two ways, it’s going to be the finisher in a Boros deck. This is prototypical aggro decks, in that you want to swarm the first few turns and never take your foot off the gas. When they have one, maybe two blockers, Iroas lands and messes up their plans.

What I thought would spike: Aurelia, the Warleader, Assemble the Legion
What did spike: Boros Reckoner

Assemble gets much less of a boost with the Goblin War Drums/Dolmen Gate combo than it would with a straight-up Orcish Oriflamme. It’ll be more of a standalone victory condition, and not need the God at all. Bad call on my part.

As for Aurelia, I’m going to hold out some hope that she gets a chance to shine in Standard. If not, she’s $5 while seeing no Constructed play. Picking up a few of her and waiting for a year will be decent value.

Long-term casual appeal: Iroas is going to fight with the other aggressive R/W legends to be our EDH generals and rightfully so. There will always be a home for four-mana, seven-power of indestructible Victory. Personally, I like Aurelia more but I’ll respect the choice. Regardless of Standard, I’d expect his long-term price to be around $10 ($25 foil).

What I predicted: “I would really like to see something amazing, like having it deal damage to a creature or player.”

And what we got isn’t far off! It’s actually better than I guessed, since it will draw a land or get you three free damage. If it was triggered on each turn, for your first draw, then it could get out of hand, but as it is, it will be quite efffective. I’m pleased that my best-case scenario is so close. It can be inconsistent, but the prevalence of Scry allows for this to be as effective as desired.

What I thought would spike: Ral Zarek, Niv-Mizzet, Dracogenius.
What did spike: Nothing yet. Ral Zarek’s minus ability works a lot like Keranos’s ability, and if you need to chain the two together for 6 damage, it’ll work well.

Long-term casual appeal: middling at best. Keranos is not a combo-enabler like Jhoira of the Ghitu or Niv-Mizzet, the Firemind. Being indestructible is nice, but the Bolt/draw a land requires library manipulation so you can get what you want. This price would be around $8/$20 long-term.

Well, I was way off. I certainly did not expect an update on Omnath, Locus of Mana. While this God doesn’t use traditional Simic abilities, what it offers is quite unique. At first, I was dismissive if the card because it didn’t offer what I wanted it to have. I really wanted some great effect for my Experiment Kraj deck.

I’ve come around somewhat. This effect is unique, not suffering Omnath’s issue of being an easily-killed creature. Kruphix doesn’t get bigger based on mana, and stores it as colorless. You’re going to see a lot of casual Kruphix decks. Plan accordingly.

What I thought would spike: Prophet of Kruphix, Prime Speaker Zegana
What did spike: nothing yet

The God and the Prophet work disgustingly well together. In a four-player game, if you cast Prophet on turn five, Kruphix on opponent #1’s turn, store mana for two other turns, you’re throwing Genesis Wave for 13 on your turn 6. Or you’ll get really crazy with Hydra Broodmaster. The prices on my predictions have not gone up yet, but I think Prophet is a great pickup anyway.

Long-term casual appeal: high. I think this will never stay in your trade binder long. $10, and a premium up to $30 on the foils.

What I predicted: “My prediction on this god’s ability is that it is a reprint of Sanguine Bond, only better in multiplayer.”

Instead of Sanguine Bond, we got a variation on Prince of Thralls. I like this effect in these colors, especially as Cartel Aristocrat is still around. I admire the subtle elegance of how Athreos defends your devotion, too: if your opponent does kill your creatures, life must be paid to keep it all from coming back.

What I thought would spike: Blood Baron of Vizkopa, Obzedat, Ghost Council
What did spike: nothing yet

There’s a good chance that this doesn’t cause many spikes. It’s cheaply costed and that allows it to slide right into some decks, without enabling a whole new archetype. It certainly does play well with the Ghost Council, though, and I wouldn’t be surprised to see Athreos end up in some midrange decks.

Long-term casual appeal: Some but not strong. Orzhov doesn’t have all that many legends to choose from, and insurance against Wrath effects is nothing to overlook. Still, I’d be surprised if this was over $8 and $20.

What I predicted: “It’s likely that there will be interactions with the graveyard, my guess is that we will see something that brings back creatures from the graveyard to the hand.”

I’d felt pretty good about this prediction. 3BG for the ability ‘At the beginning of your upkeep, you may return target creature card from your graveyard to your hand’ seemed just right on a 6/5. If we can Lightning Bolt every turn with Keranos, we can’t get a Raise Dead each upkeep?

Well, apparently not. Instead, we get a symmetrical effect on a three-cost, 5/5 God. We’ve never had a graveyard-removal ability that gave a benefit to the owner of the exiled card, and we have Night Soil, Necrogenesis, and Cemetery Reaper as examples. In a word, Pharika is underwhelming.

What I thought would spike: Lotleth Troll, Vraska the Unseen
What did spike: Nothing, if ever

I can’t see this causing much of a spike. The ‘dredge’ deck in Standard will look into playing this card, mainly because that deck plays Jarad. But that deck can lay down an active Nemesis of Mortals on turn three, and Pharika lacks a lot of the synergies the deck requires.

Long-term casual appeal: Regrettably low. There are lots of graveyard-exile options that don’t reward your opponents with deathtouch tokens. Those will see more casual play. $5/$13 foil.

I think that these Gods, especially the final two, show the tradeoff you have to make when you lover the mana cost of a card. I’d be surprised if my version wasn’t in playtesting at one point, and then they tried lowering the mana cost…so they needed new abilities that were less powerful.

Still, most of these are awesome cards, and should be a lot of fun to play!

One thought on “Reviewing the Divination”