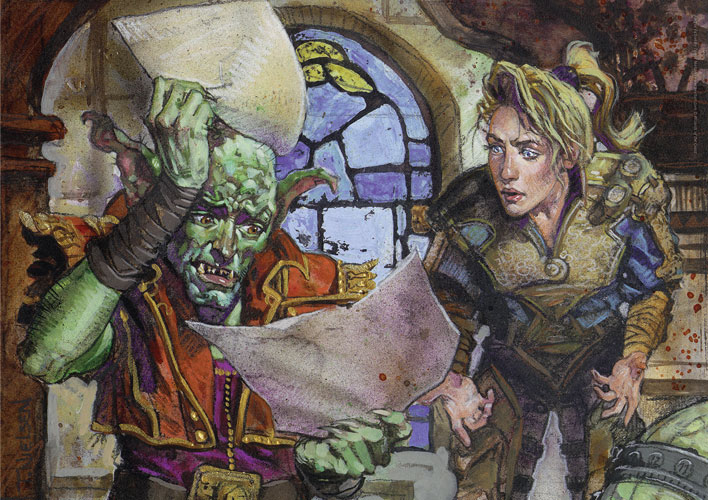 There is a term in economics called “Head and Shoulders.” It is a way of evaluating a chart to predict an upswing in the prices of a stock or commodity. This is better described with a picture: Here there are two shoulders and a head. There is an initial upswing that signifies the “left shoulder.” After this initial rally, prices decrease again to a reasonable reentry point. After prices decrease, there would be a second major rally where prices increase dramatically past the left shoulder point. This rally is called the head. After the peak of the head, people sell out. Finally, there is a third rally called the right shoulder.

How does this relate to magic finance?

It’s simple, we can use the same analysis to see how the secondary market reacts to events. This statistical method can help us see when cards are going to go up even more than they did at first, and at what price to buy in.

This has the most applicability to the recent modern changes. The banned and restricted announcement caused a mass run up on certain cards, one of them being Mistbind Clique. I do not think that these run ups are now the baseline prices. We will see a dip as there isn’t the REAL demand for these cards.

What do I mean by real demand? The kind of demand generated by players, not speculators.
When there is an unbanning like this, there are a ton of speculators who don’t want to hold these cards for the medium to long term as players, they simply want to generate a profit. This causes a bandwagon effect where prices of cards skyrocket to levels previously unseen.
The special thing about unbannings is that the pros haven’t been able to showcase decks that real players want to play. Real players haven’t seen “that deck” that has one of the unbanned cards. As a result, when the speculators sell out after making a profit, there is little real demand for those cards at those prices. As a result, the prices drop dramatically, waiting to rally when “that deck” shows up.

So where do pros showcase their decks?

At the pro tour of course.

Want some real proof of this?

The only unbanning we’ve had in recent years in Modern was Valakut, The Molten Pinnacle. Cards that had very specific interactions with Valakut but weren’t really playable otherwise were now VERY playable. These cards are ones like Scapeshift and Prismatic Omen. Let’s take a look at the graph of Scapeshift. Brilliantly, we can see a textbook head and shoulders formation. After the B&R announcement, there was a quick run-up on Scapeshift. This represents the left shoulder. In the weeks after the run up, prices decreased by almost 40%, only to increase back up to the point where the left shoulder left off. That represents the head. The price decreased again back down to the bottom level. After that, there was another rally around this card, and there was another run up. This was the right shoulder. This was on a narrow card like Scapeshift, which has little utility outside of the Valakut ramp deck. Prismatic Omen, unfortunately, did not follow this pattern. Let’s take a look: I can formulate some reasons why this card did not have the same potential for a rally:

What can we formulate from the lesson of Prismatic Omen? Don’t focus in on narrow cards. Cards that are targeted should be a four-of in a deck. They should be playable in many decks for risk prevention.

Now that we’ve looked at history, let’s look at the current cards. What would I recommend targeting around the pro tour?

First, go with your gut. I know I’m more focused on statistical analysis. But as magic players, we all have that sense of what’s “good” or not (some of us more than others). You should pay close attention to the Pro Tour coverage. This provides you with a literally instant way to find things to speculate on. Watch the match-ups.

The buzz factor is also important. Watch all the relevant hashtags. I like to watch #mtgfinance, #mtg and #mtgo. There are a few others, and there will be a pro tour hashtag to watch. (#PTBNG -ed) Listen to LSV. Listen to Travis Woo. Follow Michael Hetrick on Twitter. People with THAT kind of name power can really move cards. That’s how real demand is generated. People see their favorite pros playing or talking about a deck or card, and THEY want to get their hands on that card. Speculators generate a sort of artificial demand for cards to run up the prices. The lasting profit will come from people who actually play modern, or are looking for cards for the PTQ season in the summer.

This is also the time to make some long term bets. We are looking at cards that have the potential to double or triple by PTQ season. These are mostly cyclical.

What would I be paying very close attention to? This card is TOO cheap. There is little reason this card should be five dollars with how much play it will see in Modern in the next season. The (un)bannings have provided an opportunity for Restoration Angel. I could see a UWB or WB deck with Bitterblossom and this card. I wouldn’t move on it now. I want to see proof of this card seeing play. Regardless, five bucks is the absolute floor for this card. I don’t see it reasonably going down AT ALL. This is low-risk, possibly high reward. It sees play in Commander and Cube, so there’s some potential for long term growth. Keep your eye on this. I think the spike on this card is unwarranted. Many others feel the same way. There’s going to be a major sell off for the next couple of days. Look at the hilariously high buylist prices. A selloff is in order. Speculators are the only people who were actually buying into this hype. Over the next two weeks coming up to the pro tour, they will start selling off after getting in on the ground floor. I’d put this at a hard WATCH. Pay attention to what pros are saying about this card. If you think that there’s enough hype around it coming into the Pro Tour, it’s reasonable to move in on this one. Sell into the pro tour hype.

This is exactly what I was talking about with head and shoulders. We’ve had the left shoulder. The selloff is about to happen. Get in when prices decrease dramatically and you could see the head be even larger than the run-up on this card initially. This one has been on a steady decline for the past several weeks. I don’t think there’s a reason for this card to decline while Splinter Twin rises (more on that one in a moment). Kiki-Jiki is good in the Kiki-Pod lists a couple of months ago. While that deck fell a bit out of favor, I could see a deck with better creatures being better against a field with more Zoo and Fae decks (um. Restoration Angel blocks 3 power flyers for days). Also, Splinter Twin is fast and has the disruption to Remand annoying faeries.

I don’t see this not going up. If there’s a Faeries deck, it might play this one. Moreover, Splinter Twin and the TWoo and UR delver lists are playing this amazing card. Deathrite Shaman, a notoriously useful card against Snapcaster Mage, is gone now. Also, Deathrite comes out T1 and is immensely frustrating. I don’t think there will be major gains here, but it’s possible you could get a 30% gain from this card.

Out of any banned card in Modern, I think this has been the most unwarranted sell-off. This is a Legacy and (to a lesser extent) Standard playable. Watch the price. I’m a buyer under four dollars. Buy foils too. Foils are good as this is a Cube and Commander card. Watch the price for foils. If they tank, you’ll be in for some major profits.

My final pick is: This, surprisingly, hasn’t seen a run up. I don’t know why. It plays very well with Wild Nacatl in a Zoo deck as a huge beater with a very useful effect in that deck to get a, say, Gavony Township. It’s also widely playable across the format. With Noble Hierarch being the defacto mana dork now, a Bant goodstuff deck may come to the forefront for example. Either way, I don’t see this card going lower than it is now. It’s definitely a pickup.

Before I go, I’d just like to introduce myself. I’m Camden Clark, and I’ve been playing Magic since Dark Ascension. I’m really interested in the financial aspect of MTG, and want to use statistical analysis to help evaluate cards. Follow me on twitter at http://twitter.com/flshbackfinance I’d love to have a chat! In full disclosure, I have not purchased any of the cards I have endorsed above, I’m just trying to help you know what to look for in cards and how to use the powerful statistical tool that is mtgprice.com!
See you soon.