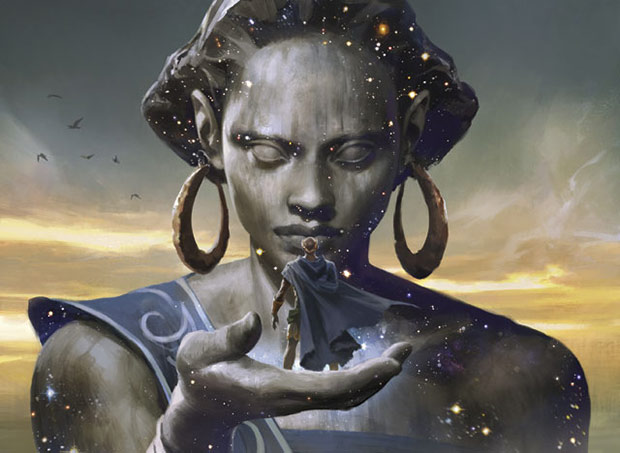 I talked two weeks ago about the picks I made and how the Pro Tour set the metagame that will go into the Pro Tour Qualifier season.

I was and still am really optimistic about the future of Modern in both the short and long terms. There are a lot of people who really enjoy this format. Wizards has been throwing so much at this format to make it work that Modern will not fail.

With Modern there are so many more copies of each card in print than, say, Revised. There are simply more copies of Verdant Catacombs than Bayou out there. Herein lies the genius and the pitfall of Modern. Wizards could decide to reprint a popular Modern playable, crashing the price but significantly increasing accessibility. As the reserved list prevents Wizards from printing more copies of Bayou there will be no room for more players to get in and the floor will only get higher and higher.

Although there is the potential for these pitfalls (see Remand) overall the trend for Modern has been up. This will only continue into the summer and beyond.

I want to avoid proselytizing the death of Legacy. However, the huge Modern GPs show the inevitable adoption of the Modern format as a semi-eternal format that has higher accessibility. Star City Games has a LOT invested in Legacy cards. They will not stop doing major Legacy events. The recent spikes of dual lands worries me for the future of the format. There are quite a few people who have their Legacy card collection from buying the cards years ago. These players do not grow the format unfortunately. The players that grow the format are ones who buy into the format. If decks cost six thousand dollars or more, who will pay that just to play one event a year?

This is the main reason why I like investing in Modern in the short term and long term. There are huge opportunities to make money on commons, uncommons, rares, and mythic rares. I would like to elaborate on the short term picks that should rise going into the summer.

I am a huge fan of this card right now. It has a major role in most URx decks that are not Storm. Lots of spikes who will play in the PTQs love to play their control decks. Many of them will choose these decks. Electrolyze is really strong against almost every deck in the format. It even has utility against Storm as it draws a card while killing one of their enablers, Goblin Electromancer.

The effect on this card gives it major utility even in matchups where it is dead. If you are leaving up a counterspell, and they pass the turn, you can play Electrolyze to draw a card. This makes a huge difference in the playability of this card. I can’t see this not going up and it will be a major staple of trade binders going into the summer.

All of the Fetchlands

Players will pay ANYTHING for the fetchlands.

Most everything has been leading to my belief that there will be no fetchlands in M15 or Conspiracy. M15 will still have shocklands for a brief period of time. Wizards is not going to let fetches and shocks in at the same time in Standard. It’s pretty clear Conspiracy was designed to be a beginners set at this point and it is quite unlikely that fetches will be in that set.

All this means is that our investments are secure through the summer. There is only an infinitely small chance of a reprint before “Huey.”

With that confidence, if you want to play with or invest in fetches, buy as soon as you can. You will never get a better opportunity than the one that has been presented right now.

I especially like Scalding Tarn as a choice. This card will probably reach one hundred and fifty dollars in the height of PTQ season. As I said earlier, the people who need these cards REALLY need them. And they want a playset. Stock up on these. You can sell them for hilarious premiums on eBay later in the summer. If you just want to play with them, you won’t get a lower price than now heading into PTQ season. After you play with them, you sell out again. Fairly straightforward.

The other fetchlands have not dropped in price as much. However, they are still great pickups. If you have the money or trade, put it into fetchlands. There is little risk here going into the summer.

The only fetchland you should be concerned about is Marsh Flats. This one might be getting a reprint in a pre-con. Be wary. Do your research.

Lots of players have been trying to make this card work. There are quite a few Gifts decks out there. 4c Gifts and UW Tron are playing this and use it for massive value. There aren’t too many copies of this card out there. There will be people who want to play this in casual formats and Modern. I do not see this going any lower especially since it was in Modern Masters. This is an easy card to move in on.

This one will probably stay stagnant until someone decides it is too low and buys it out. After it is bought out, the price will double or triple. I would not want to miss out on this spike. There would be no warning. It seems almost inevitable at some point.

As PTQ season and Standard winds down, there will be a massive dropoff in demand for Thoughtseize. The price of the card will drop off immensely. That’s the time to pick it up. It will still have a year in Standard and an infinite time in Modern. This card is a pillar of the Modern format and will rise to the unreal prices it had before the reprint. Look to move in on these after selling out of your Modern picks.

The price of these will also dramatically decrease in the double loss of cycling out of Standard and PTQ season ending. Your window here will be very small. Moving in on this one would get you some nearly assured profit in a year or two. Trade for these, buy them on eBay, whatever you have to do. You will not regret this decision when the PTQ season far in the future hits.

It is worth mentioning the power of foils here. Many will be very interested in foiling out their decks. Take a look at the graph for foil Stoneforge: 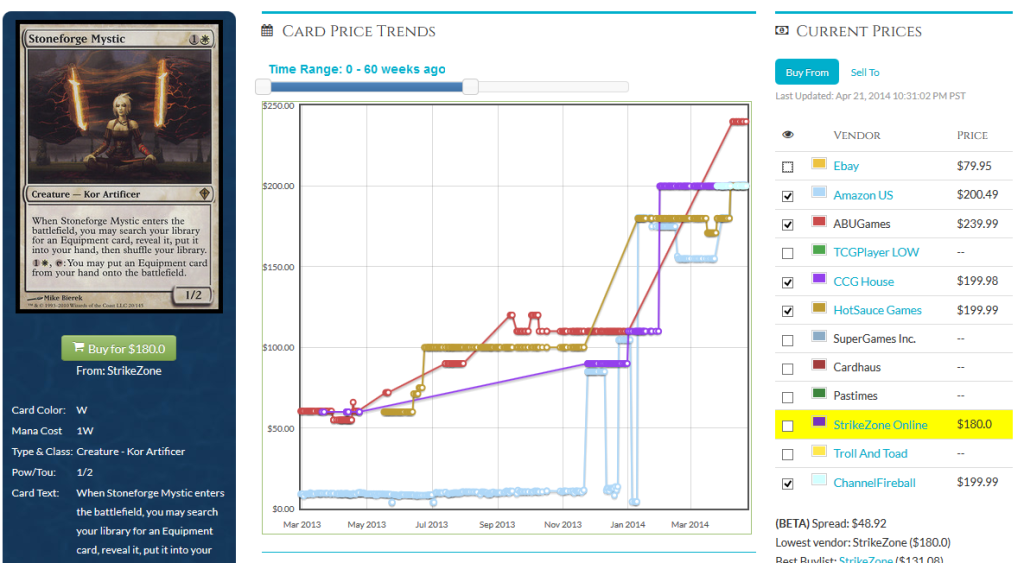 I predict the exact same thing will happen with Modern. People will want to invest into making their decks look awesome. In one year the price quadrupled.

The price graph of foil Steam Vents is shown below: 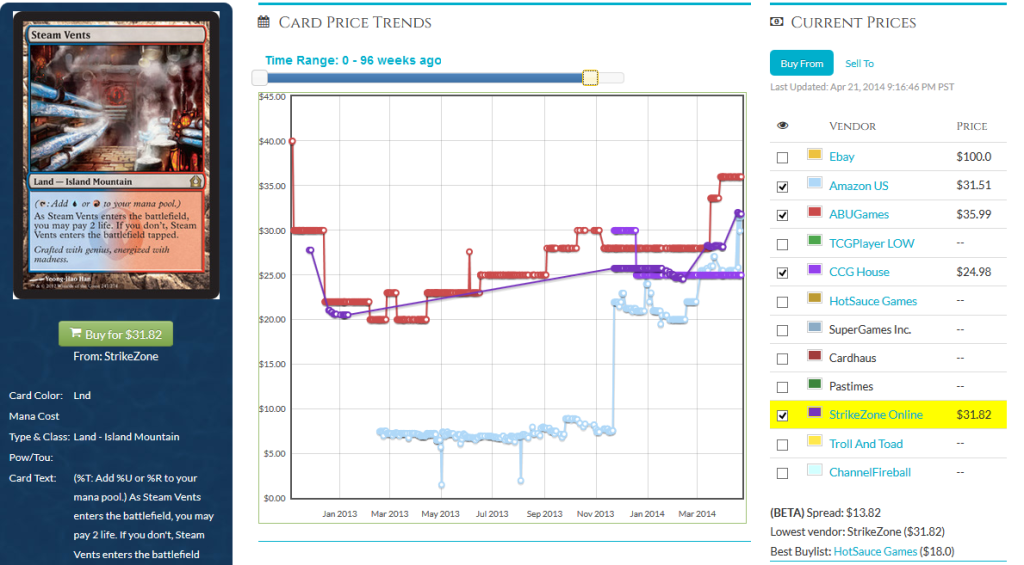 Bold prediction: next year, in April, a foil Steam Vents will be 90 dollars. There is very little to stop the price of these from skyrocketing. I would trade for and buy these aggressively. If your bankroll can handle it these cards are amazing.

I now want to talk generally about the future of Modern and its relationship to Legacy.

The first option won’t happen. Wizards has invested too much into this format for it to die. Modern Masters’ popularity showed the interest in the format. The Pro Tour and GPs have cemented that interest and proved that Modern is here to stay.

Three is quite unlikely in the near future. Star City Games will support the card market for Legacy. They have quite a bit invested into this specific market. There will continue to be Legacy events ran all around the country.

Two is the most likely. Modern does not spell the end of Legacy necessarily and will merely substitute it for less serious newer players.

What this does mean is that Modern is here to stay. There is no ceiling on the cards in this format anymore. Who could have predicted hundreds of dollars for a dual land? If you did, you’d probably be rich. Now, we have empirics for how eternal formats can drive prices sky high. Foils are even crazier. Modern is where the money is and will be for the next two years at least. Buy in cheap while you still can.

What do you think the relationship between Legacy and Modern will be going into the future? Hit me up on twitter: http://twitter.com/CamdenClarkMTG

4 thoughts on “The Future of Modern”