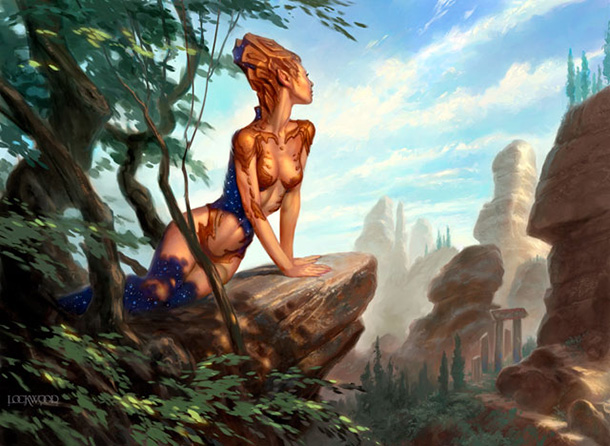 I think $12 was the new floor and $14 seems fair for this Commander. It is being used in 4 Color Delver and Noble Fish.

4 Color Delver made Top 8 on 4/20 in Detroit. It is earning its place and I would gladly trade for these at $10 to $12. I would not go too deep in them though. There is only one in the decklist. Commander and Legacy players alike will only need a single copy. It is still something good to keep in the trade binder.

Modern loves its Izzet decks. From Kiki-Jiki making a billion Pestermites to Goblin Electromancer and Pyromancer Ascension powering up Grapeshot for the win.

Both of these combo decks need their mana fixed consistently and quickly. They need to have blue for Serum Visions or Sleight of Hand and red for Lightning Bolt and Shattering Spree.

They both want to win quickly before Tarmogoyfs can attack for large amounts of damage.

Taking a little pain from your lands is acceptable to end the game a turn earlier.

Despite three printings Shivan Reef is still going strong. I would not recommend any of the other painlands. This is the only one seeing wide adoption. That is why it is so much more than the others.

I think these could be a strong sell as Modern season is approaching they have people looking for them but the power of the card probably gives it a ceiling of around $8. I don’t see this as a $10 card so your profit is already set.

Cephalid Coliseum has been printed twice. It was an uncommon in Odyssey and it appeared in the From the Vault: Realms.

It is used in Legacy Dredge decks as a full playset.

It is a deceptively powerful land. For a single blue mana you can get an Ancestral Recall and mini-Buried Alive rolled into one.

You get to stock your hand and your graveyard at a very reasonable pace.

What’s more is that in a standstill you can use it offensively. You can target your opponent and essentially Burning Inquiry them to mill for the win.

We have recently seen Ichorid from the same deck increase in price. Mana Confluence from Journey Into Nyx will help the mana in this deck by upgrading City of Brass and will edge out Gemstone Mine or Tarnished Citadel.

I think this increase is deserved and would be happy to trade for them around $2 from anyone who still has old price memory.

Shadowborn Demon is a mythic rare from M14. It is currently used a 2 of in Golgari Dredge Standard decks. It also sees play in Junk Reanimator.

There may be a little growth but I don’t see much opportunity compared to the amount of risk associated with this card. I would trade these as fast as I could.

Nether Shadow is a staple of Legacy Manaless Dredge decks.

The fact that it can be brought back from the graveyard turn after turn and attack or chump block for free gives it immense value.

We are not going to see any future printings because Wizards of the Coast no longer supports cards that care about graveyard order.

It has been printed six times if we count both Alpa and Beta so it will not see explosive growth. It will grow slowly over time.

Nether Shadow knows that sure but steady wins the race.

Drop of Honey is a rare from Arabian Night. It is powerful as cheap, repeatable green removal. It is also on the reserved list.

Most importantly is that it has been used in mono-green 12 Post decklists as a sideboard card.

I think the fact that this card now buylists at the price it had last week is evidence that retailers have a lot of faith in the card.

It seems that all of the wedge commanders are being snatched up while the snatching is good. It is easy to see why.

They have color combinations that are difficult to print in normal expansions.

Their abilities are unique and fun.

Karador plays in a lot of space that makes him popular with casuals.

He has interested interactions with the Graveyard and can provide value as he lets you cast your creatures over and over again.

He is one of only four Commanders in his color combination. Each one offers very different styles of deck that they want to be played in.

I think he will continue to grow in value as time goes by. He is tough to reprint in a normal set so the only opportunity for him to show up again is in future supplemental products.

I did not even remember that this card existed. It only has two things going for it.

It was a rare from Antiquities so there are few in existence. It is on the Reserved List.

The ability is expensive and does not even work in a deck that wants to sacrifice its artifacts to Megatogs or Grinding Stations.

I see no reason for this price increase except for someone trying to get cute with the market. Stay away.

This rare from Weatherlight is on the reserved list so there is very little supply.

It is not seeing play in any tournament format. Where is the demand coming from?

There is not a Commander deck in existence that should not ask itself if it should run a Winding Canyon.

The ability to give any creature in any deck flash can disrupt any potential combat situation.

You can trigger evolve, constellation or even throw down a big Blightsteel Colossus or Meglonoth as a surprise blocker.

Just imagine how devastating casting something like Sunblast Angel can be as an Instant during combat.

The last time Wizards of the Coast gave a similar ability to a land was Alchemist Refuge.

I think this price is here to stay.

Everything I said about Karador can be repeated here.

The Mimeoplasm was only printed in the original Commander decks and Commander’s Arsenal.

What I love about The Mimeoplasm is that he is in great colors and let’s you mix and match your creatures in endless combinations.

The great thing is that is just gets better as more creatures are printed. I think that this recent surge in prices for Commanders is actually a price adjustment that has been warranted. I would not mind trading for them at these prices if I wanted to play with them.

I do think the chance to make a quick buck has passed.

Necropotence is restricted in Vintage, banned in Legacy and too dangerous to reprint outside of From the Vault: Exiled.

This card is a piece of Magic history and is one of the most powerful card drawing engines ever printed.

It has shown steady growth for a while and this is just turbulence. I would grab as many at $6 as I could and hold onto them. I would not be surprised to see them as high as $10 by the end of the year.

This looks worse than it is. I still like Ghostly Prison for the sheer power and versatility it represents in Modern and Casual formats. It has already had a tremendous year and I expect it to show up in every deck running Sigil of the Empty Throne and then some.

It plays a strong defense allowing you to buy time to get to your win condition. It makes attacking you problematic and swarming you impossible. Suddenly having twelve 1/1 goblin tokens from Empty the Warrens is not such a dangerous proposition.

This is another one I would try to trade for.

This rare from Legends is on the restricted list. It is a powerful combat trick but otherwise unremarkable.

My outlook on the demon ninja is the same as it has long been. It likes to play ping pong between $5 and $9.

I would trade for it at $5 and trade it away at $9. This just may mean it is time to keep your eyes open for that $5 copy soon.

There are a number of competitive Legacy decks that play a full four copies of this handy artifact.

If you are a Legacy player and have a fully foiled deck then you need these. They are the only way to get a premium Petal.

I would get in on these. I think they will be back to $40 and even $50 sooner rather than later. You will be glad you got your play set for around $100 when that happens.