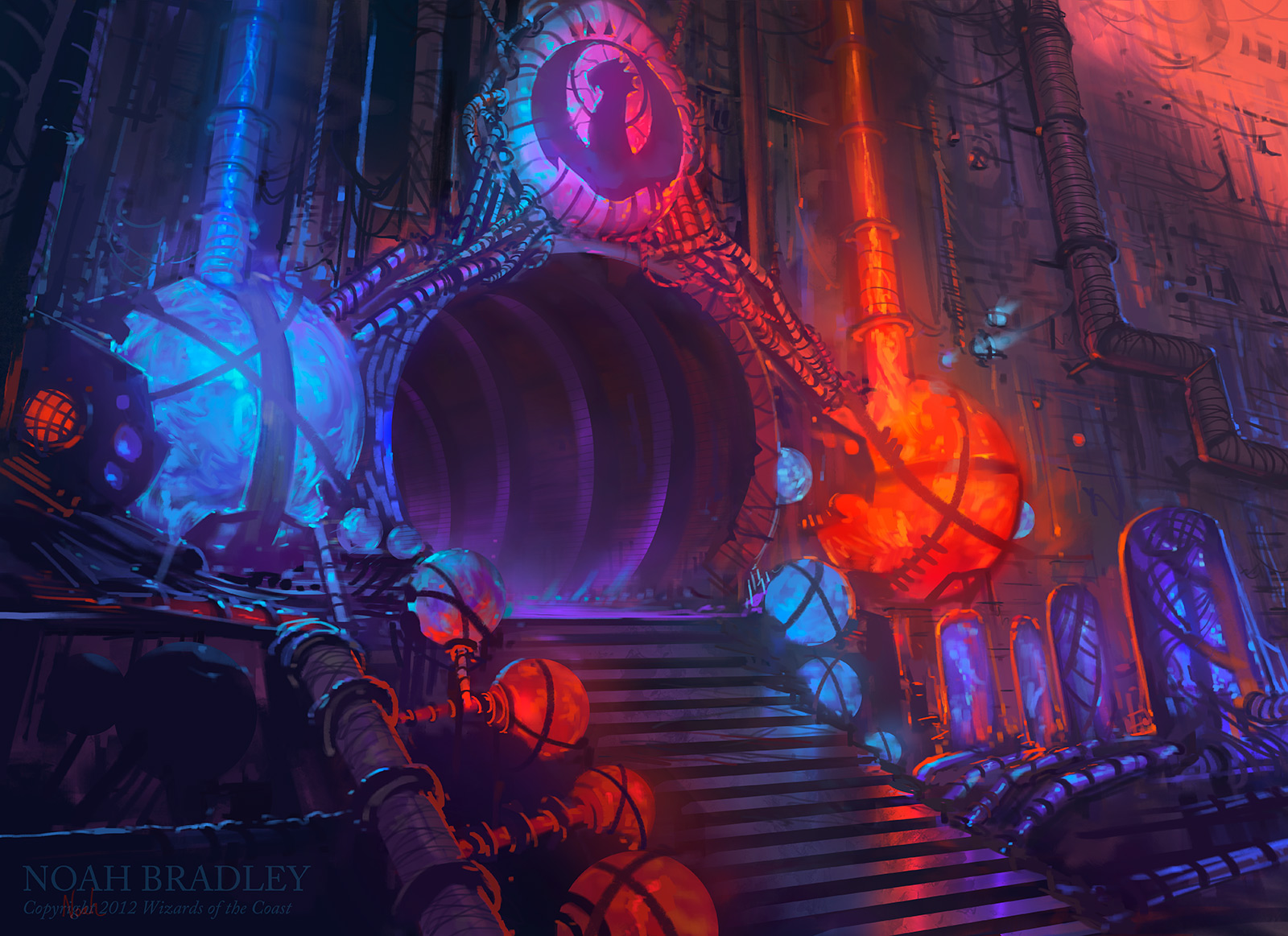 It was a great disservice to many when I excluded Card Kingdom from my buylist data crunch article, so I decided to gather the buylist data from their website for uncommons, rares, and mythics legal in Modern in order to compare them to the other Modern buylists that MTGPrice tracks.

I will also list out the TCGPlayer updated information I was able to calculate based on the 8.5% TCGplayer fee + a PayPal / credit card processing fee of approximately 3%. Hopefully this will paint a more realistic picture of the costs associated with buylisting and selling on TCGPlayer.

I also want to mention shipping costs, which can be significant over time depending on the volume of cards you are buylisting or selling. It usually costs about $2 to ship a padded envelope First Class USPS. This is what I find myself shipping the majority of the time if I am buylisting something. If you include insurance your mileage will vary, but if you are sending hundreds of dollars of cards to a buylist you may want to consider adding insurance to the shipping cost. If we add insurance it would come to approximately $1.65 for every $100 worth of cards that we ship. If we assume that the average buylist shipment is about $200 per shipment, that’s another $3.30 we need to account for insurance if we are including that. That comes to about $5.30 to ship a package, whether that is to an eBay / TCGPlayer user or to a buylist.

It is hard to account for shipping concretely in my calculations – how often are you actually spending $5.30 to ship something? If I used that number and tried to calculate a percent earned after paying for shipping it wouldn’t look realistic at all. There are ways to reduce your shipping costs by introducing risk but that’s not something I’m looking to get into right now. Just as an example, maybe all you need is $0.49 to ship a plain white envelope (PWE) with the cards in it. I’ve done this plenty of times on eBay and have never had an issue. For buylists this is the same, if you are only sending a handful of cards. It all comes down to trust in the system yet I think you should err on the safe side and think about getting insurance if that handful of cards starts climbing past three digits.

Before I list the updated data, some notes about the Card Kingdom data set:

*Only 10 mythics on Card Kingdom’s buylist were at $3 – like ABU and other large vendors, they have a very diverse buylist for mythics since they are buying 307 mythics. 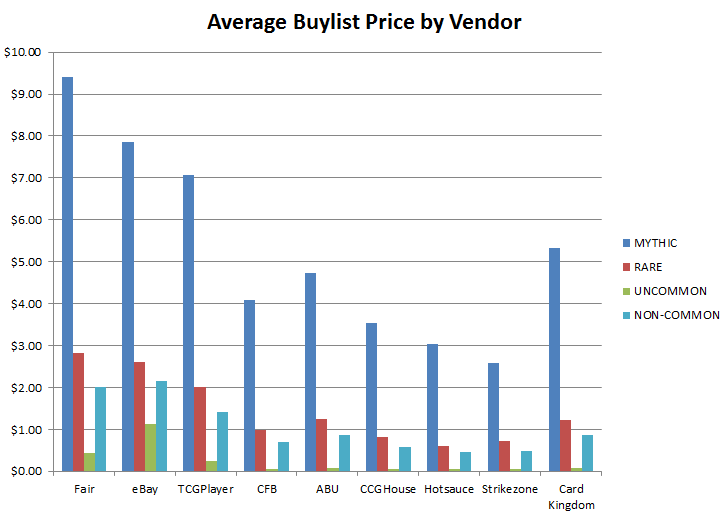 Adding Card Kingdom to the average buylist graph shows us that it is indeed a competitive market player. They offer a higher mythic buy price on average than ABU, which was previously the vendor that offered the highest average. They also are very competitive on pretty much all non-common cards as well by offering 0.86 on average based on the amount of cards they buy versus ABU’s 0.85 average. A slight edge, but still significant in the big picture since it means that they buy just about the same amount of cards as ABU but generally offer higher prices on those cards. 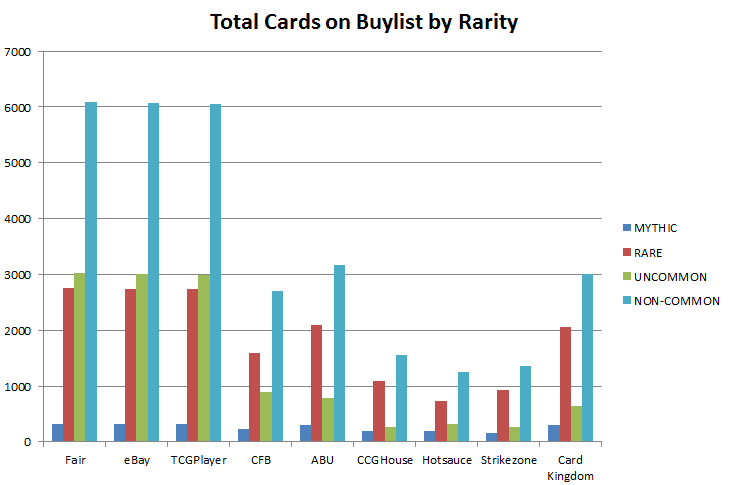 Here again we can see that Card Kingdom has a ton of cards on their buylist compared to the other vendors. Like ABU, they have an exceptional amount of mythic rares on their buylist and have a demanding want list. Card Kingdom slightly eeks out the edge with 307 mythics versus ABU’s 293 mythics. They also buy about the same number of rares as ABU, only behind them by 24 rares.

One thing Card Kingdom lacks is Uncommons – even going through the buylist manually collecting the data I could see this. For many Modern sets, Card Kingdom only looks for about 5 to 6 commons from each set. They clearly must have a lot of uncommons in stock that they want to sell or another reason they aren’t actively buying uncommons from players. Looking at the graph you can see this, but citing the numbers they only want 641 uncommons versus ABU’s 794 and CFB’s 888. For uncommons, it is more hit or miss for Card Kingdom than other big store buylists.

I’m going to skip showing the Median and Mode buylist by vendor as I’ve realized that they can be misleading, especially considering the variety of prices that the big box vendors offer. So I will skip right to the percent loss. 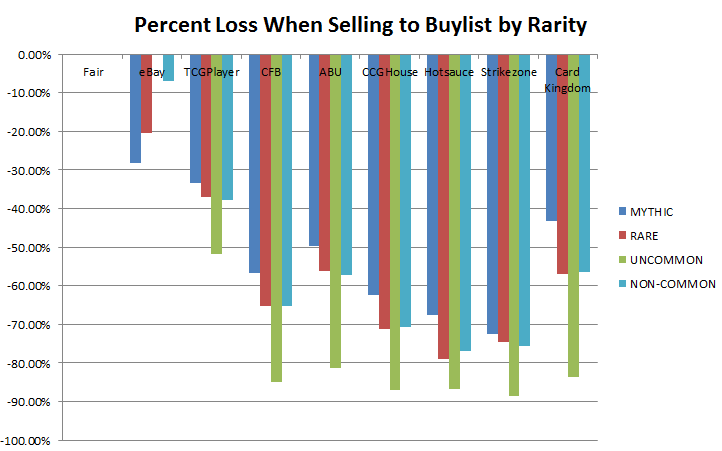 Here we’ll want to look at TCGPlayer and Card Kingdom since I’ve updated the TCGPlayer loss to account for the fees just like eBay. Compared to the old data, accounting for fees you are losing -37.73% rather than the -29.64% than I had originally indicated – this is a pretty huge oversight on my part! That’s another 8% loss that I didn’t originally account for and really makes a difference when you also consider shipping and possibly insurance. It helps bolster the argument that when you buylist something, you don’t have to wait to sell them to get your cash – time is money after all and we’ve just found out that TCGPlayer isn’t quite as profitable as previously indicated.

eBay hasn’t changed unfortunately, which is because of the absurdly high averages for uncommons I was getting since MTGPrice was probably also including sold playsets in their calculations for a fair eBay price. That and I failed to account for other factors like listing fees, (which only really happen for big time sellers who have more than 50 listings per month) shipping, and shipping insurance if the order required it. I’ll talk about shipping more in the next section since I didn’t really know how to integrate this into my current data set.

Now I’d like to talk about how shipping factors into all this. There are several options you can pursue for shipping, some of which I mentioned above:

Which option is best for a buylist? I’ve had success with mailing 3oz padded envelopes to vendors like ABU and Card Kingdom on several occasions without an issue. I’ve fit entire tournament packs stuffed with cards into these envelopes and the USPS has shipped them, no issue. When I had packages valuing $200 or more, I bought the insurance which was about $4 more for shipping and gave me peace of mind. I would recommend this approach for buylists because generally you will want to send them a ton of cards at the same time in order to collect a  big payoff quickly from any financial opportunities you’ve had. Using a padded envelope in addition to insurance will allow you to send off these larger packages without leaving too much on the table – trust me, losing $200 in the system once is enough to make you want to get insurance forever. Please don’t be that guy!

I’ve also shipped $0.50 envelopes when someone won an eBay auction where I was selling something. I think I even sent a playset of Jace, Architect of Thought this way without an issue. Obviously this was a huge risk I was taking on my part but I wanted to discover for myself just how big of an issue it was to ship with PWE’s – never had a problem so far but I always seem to hear horror stories from people. In my experience if you are only selling a playset of a card then I would ship in a PWE and not worry much about it but make sure you get insurance if you are selling something like a foil Snapcaster Mage or a playset of Thassa’s. At least you could do that to save a few bucks on a padded envelope and extra shipping for that envelope through the USPS.

The guideline I follow is ship lower cost items cheaply so that you save on shipping costs. PWE’s for any uncommons or other random rares you may sell in playsets is fine and it will hardly eat into your profits like the eBay or TCGPlayer fees would. Buy better packaging for larger orders or pricy cards (think dual lands or other Legacy staples) and include insurance if it starts getting up past $200 or more. I’ve done this so far without a hitch and I can say I’m quite happy with the approach.

Hopefully my inclusion of Card Kingdom has shown that they are also competitive in the buylist world and go toe to toe with ABU on mythics and the amount of cards that they buy. Once MTGPrice adds more card sources to their data set, including potentially European or other international sources, it will only further help us all understand where to better focus our efforts when buylisting.

Maybe I’m missing something simple but shipping seems hard to include in the dataset without greatly skewing the numbers the more I think about it. It could be included but I would need more time to think about specific rules and scenarios of when to use and not use shipping insurance and how to calculate the risk of a PWE versus a padded envelope with the insurance. Jason might be able to chime in here since I’m sure he has way more experience in this realm than me. At the very least, you’ve all read about my experience with shipping and can take it as you will. I wanted to talk about it though because it is a real cost that sometimes gets forgotten in the excitement of buylisting something for higher than you bought or traded.

One thought on “King of the Buylists”