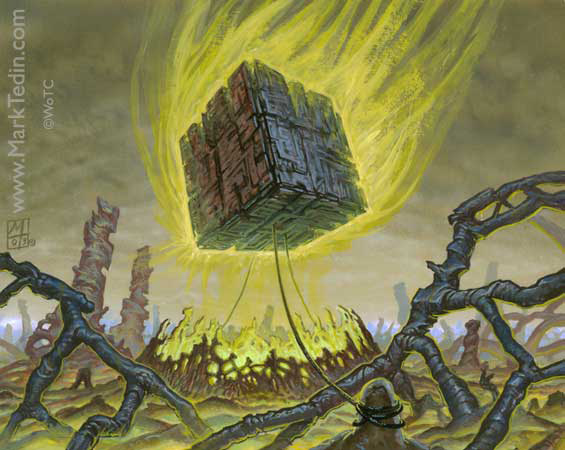 The first time I brought my girlfriend Em over to my friend Nic’s house to introduce her to Magic beyond the realm of our own kitchen table, my other friend Matt had brought his cube and we were ready to play with it. I’ve fondly named it the “Matt’s Greatest Hits” cube since there isn’t any goal or overarching theme with the cube (at least that I can see). It is simply his personal favorite cards along with solid roleplayers to create archetypes to play with. Anyways, we’re trying to get people involved to get some awesome cube action going and he’s asking everyone “Are you cubin’? Are you cubin’?” clearly leaving off that oh so important ‘g’ at the end of the verb ‘cubing’. When Em was asked this question she responded “From the country of Cuba?” fully believing his question was “Are you Cuban?” We all had a good laugh, and after I explained this misinterpretation we were soon underway.

Besides the “Matt’s Greatest Hits” cube, Matt also has put together an Innistrad cube and a Return to Ravnica cube. These are definitely more theme and goal oriented, as he is focusing on specific limited environments for these cubes in addition to trying to foil out as many cards as he can. These cubes also better reflect the draft environments of the sets because he includes multiple copies of commons and usually two of every uncommon from the sets.

Drawing inspiration from my friend’s ventures into the cubing world, I’ve made it a goal to refine my own cube. I’ve had a “Jared’s Greatest Hits” cube for quite a long time myself, which I created for something to do with my brother when I go back home to PA and we want to play Magic together. However, I’m thinking about upgrading it and making it deeper and more interactive. I currently modify it here and there but I feel like it could use more cohesiveness.

Of course, being a financier I want to know approximately how much it is going to cost me to create an updated cube. I’ll be looking at cubes that span the financial spectrums, from the ones that include Moxes to the peasant cubes that are much more limiting in the cards you can include. I will even show you some price quotes that include proxying anything $50 or more. For the calculations, I’m going to assume I’m starting from scratch with zero cards so that others who may want to build a cube for the first time know the cost of all cards.

In order to help with this effort, I am drawing upon the power of Cube Tutor and their average cubes list to get the best picture about the costs of a cube. The website’s average cubes use the most popular cube cards. Odds are that players are going to want to include most cards on the list with slight modifications based on personal preference. I think this is a good starting point for determining approximate cube values because the Cube Tutor website draws these averages from all the cubes posted on the site.

Budgeting for a Cube

The average cubes tracked are:

Briefly looking over the cubes, they range in size from small to large according to your budget or tastes. For example, even though you might have the budget to get almost anything you want, maybe you don’t have a very large group that you cube with so you only need the bare minimum 360 cards to have a well rounded cube.

One aspect of the lower card count cubes that I noticed right away was that they did not contain cards like the Power 9, Mana Crypt, Mana Drain, Yawgmoth’s Will, Aether Vial, etc. The lower cube counts opted to play more straightforward cards since cubes with lower card counts will be more linear in their strategies. This leads to the super powerful cards like Black Lotus becoming unbeatable powerhouses. To avoid this, the cube average aggregator decided not to include them in the smaller cube lists. Expensive cards are still in the smaller cubes, like Revised dual lands, Karn Liberated, Cryptic Command, and Jace, the Mind Sculptor – it’s just that the extremely broken cards like Black Lotus tend to only be balanced out by including a majority of the old broken cards. This will greatly affect the overall price of the smaller cubes if we can expect extremely rare cards like Black Lotus to be absent from them.

Pricing the various cubes, we arrive at the approximate values without proxies:

Well, if we’re talking about a 720 card cube with Black Lotus and Moxen in it, that $18,000 price tag doesn’t really surprise me. It certainly is a ton a money to invest in a cube, and if you have a cube like this more power to you. Just please get insurance. We all hate seeing those reddit posts saying that someone “forgot” to hand back in all their cards when cube drafting…

For more reasonable options, the Peasant and Pauper cubes for 720 cards are much more affordable. If you’re looking to build a large cube on a budget that can accommodate lots of players and a plethora of archetypes I think it would be a good idea to start with a Peasant or Pauper cube and modify it from there.

Myself, I only need the 360 card cube. I think I’m going to start with the 360 Peasant and modify it to my tastes from there.

If you’re a person that just has to play all those powerful cards and don’t care if you have real copies, then proxying everything over a certain price point makes sense. This way you can have the best of both worlds and also have a goal to work towards – to one day own a cube that has all the real copies of the cards you want in it. When accounting for proxies of cards that are $50 or more, these are the updated cube prices for the regular cubes. I didn’t bother with the Peasant and Pauper options because they are already heavily discounted.

As would be expected, the price with proxies drops considerably. It didn’t drop as much as I thought it would, however you could always lower the limit to $30, $20, or even $10 as the threshold for proxying. Your startup costs will keep decreasing with the limit you set yourself until you can build something that is affordable and work up from there.

Since I set the proxy limit at $50 or more, the prices show that there are still plenty of $30-$45 cards that can be included with a cube to bolster the price. Even the lower cards that range from $5-$15 can add up quickly.

Just for fun, let’s see how much these cubes are on average are if your goal is to ultimately foil them out.

So if I wanted a foil 360 card Peasant cube, I could expect to pay around $1,000 for it. This is about what I expected in terms of pricing for foils. Clearly the the 720 card powered cube was going to be absurdly expensive, there is not denying that – if your goal is to foil out a powered cube it is quite a lofty goal.

Once you’ve decided where your budget lies and how big you want to make your cube, all I can say is go for it! Know that I too will be working on my cube now that I have a goal in mind and know where I want it to fall on my budget. Even if I have to proxy a few cards initially and then pick them up over time, I at least have a starting point for how much it will cost me – especially if I want to foil out my cube down the road.

What have you guys spent on creating your cubes? Do the averages match what you think you’ve spent?

Do you procure expensive proxies to fill the slots of Black Lotus, the Moxen, Time Walk, and other powerful old cards that are hard to find? This can be a good compromise to purchasing the real card, in addition to having a fully foiled cube if the proxy is foil. I’m curious to know how much it costs to create these premium proxy cards for those who play with them.

Also, do you like to build cubes on a budget and add some spicy bulk/cheaper rares when the urge strikes you? Are you picking up multiple copies of cards to make set themed or more linear cubes? It would be good to know if Cube Tutor is hits or misses the mark in terms of what a typical player’s cube looks like.

2 thoughts on “Are You Cuban?”