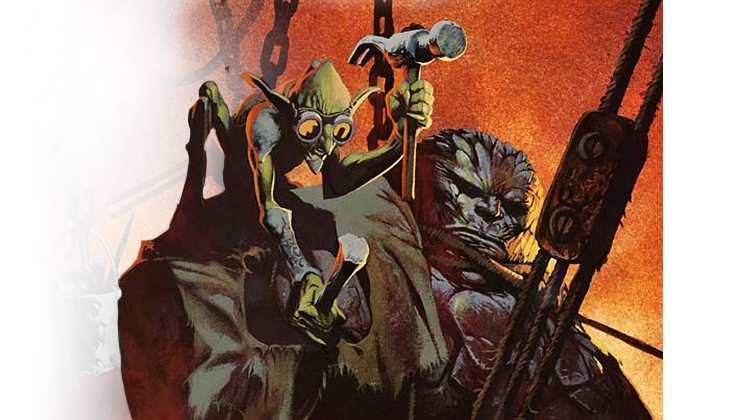 Welcome back readers! This is the second part of the Hunting for Commander Foils series where we evaluate foil Commander staples to see if they hold any financial potential. You can find the first part here. Today we shall continue where last week’s article left off, shiny artifacts.

Taking into account the comments I have received for the first article in the series, I am going to slightly alter the format of the discussion. The first article was written in a pseudo-set review style in an attempt to cover as many cards as possible by working down the list used to rank the popularity of the cards. While I eschewed foils that are too expensive (no point harping about a $118 foil Sensei’s Divining Top if the majority of readers would not be willing to spend that much for it) or are stagnant price-wise, I covered foil staples that are already relatively expensive like Solemn Simulacrum.

My intention were to evaluate if it is worth acquiring your personal copy of those cards even though they may not be good spec targets anymore. However, it gave the impression that the article was discussing ships that have already sailed. Plus it seemed that a set review style would be too long-winded; last week’s article barely made its way down the top ten cards.

So I am opting for a more succinct approach this week: I shall focus only on the foil Commander staples on the list that are undervalued, a topic I think readers of this column prefer.

Before we get to the cards for this week, an obligatory shout-out to the super useful database in which we will be extracting our cards from:

The list comes from an extensive Commander statistics database created and maintained by MTGSalvation.com EDH Primer Committee member scoeri. Every month, scoeri runs a script which trawls mtgsalvation.com for user-posted Commander decklists and breaks them down into various categories, giving an invaluable snapshot of the Commander metagame. You can find the lists here under the forum post Statistical Breakdown of the Commander Metagame. The database was last updated on 31 October 2014 with 3023 decks from 1473 users (decks posted or updated from 31 October 2013 – 31 October 2014). I am indebted to scoeri for the awesome database.

As with last week, we will be using the colorless list for the purpose of this article as the list includes artifact creatures while the artifact list only contains noncreature artifacts. Last week, we made our way down the list to Expedition Map. This week, the criteria will be stricter and we shall only discuss artifacts that possess financial potential. We will be skipping over popular, obvious and already sailed artifacts like Chromatic Lantern and focus on foil staples that are still cheap like this sacrificial deer:

The humble draft mana fixer, Burnished Hart has been getting a lot of love on the EDH subreddit and it is easy to see why: most Commander decks would like to have access to mana-fixing, and a double Rampant Growth on a bear (bear-hart) that fits into decks of any color has the making of a Commander staple, if it is not already one. Though more expensive than Armillary Sphere in casting and activation cost, the fact that Burnished Hart is a creature gives it synergy with a wider range of strategies: besides the usual artifact recurrence with Academy Ruins, it can be reanimated,  pulled out from your bottom (of your deck, hopefully most of the time) with Grenzo, Dungeon Warden, it triggers Sidisi, Brood Tyrant (which by the way has been growing in popularity as a Commander) and many more interactions a humble Armillary Sphere is not capable of.

Trading Post is the Batman’s utility belt in Commander. Need to block a rampaging 12/12 Hydra Broodmaster? Here’s a goat. Need more lands? Sacrifice that goat of yours who is going to die anyway to get back your Wayfarer’s Bauble. Need more gas? Sac that worn out Worn Powerstone to further fuel your conquest. Life’s got you down? Toss away that 10th land you drew for 4 life.

Trading Post feels a bit like a Planeswalker in the sense that it generates incremental card advantage once per turn when it hits the board. Of course, I’m not claiming that Trading Post is anywhere near the power level of a Planeswalker (maybe except Tibalt) but it ekes you advantage over a prolonged game, and most Commander games tend to go long.

Trading Post is a Swiss Army knife that most Commander decks could find use for and yet foils of it could be acquired for less than $2. Granted M14 has just rotated out and being printed in both M13 and M14 created a huge supply. Nevertheless $2 is pretty close to bulk for foil rares, what more for a popular Commander rare. I suspect foil Trading Post will become one of those foil rares that surprises people when they look up its price a few years down the road. There’s always a risk of reprint, but at $2, how much can you lose? Plus foils do retain their value better than normal copies.

Foil Trading Post have a lot of room to grow, though I doubt it will be able to hit foil Staff of Domination prices due to Trading Post’s higher supply and the fact that Staff is ran as a one-of in Legacy and Vintage MUD decks (not that Vintage counts for much). However I do think that foil Trading Posts could hit $8 – $10 in the coming years.

Trading Post is also a pretty fun card to play, and its appeal as a ‘one-stop shop’ probably contributes to its popularity among the casual crowd. Did I mentioned, Trading Post has synergy with the artifact creature Burnished Hart too?

The cycle of signets from the original Ravnica block are some of the most popular artifact mana fixers in Commander, with four of them in the top fifty most played colorless cards list (five if you refer to the artifacts list).

But their prices are starkly different. You have foil Dimir Signet at $14 and foil Azorius Signet at $10. Foil Izzet Signet is around $7 and the rest are under $5. A foil Gruul Signet is a measly $2.51 and foil Selesnya Signet is no better at $3.16. They all have seen the same number of foil printings. So why the huge price gap between the most and least expensive signet?

The price pattern shows that the signets with green in them are the cheapest of the lot. Perhaps already having access to plenty of mana fixing, green-based decks do not run signets as much as the non-green decks do.

A quick glance through another database by scoeri breaking down the statistically average composition of the decks of the top fifty commanders validated the hypothesis. The green-based decks rarely included signets in their list, while the non-green decks often ran all the signets their color identity allows. Furthermore, the four signets in the top fifty most played colorless cards list (and the fifth signet if you count the artifacts list) are all non-green.

Check out the top fifty most popular commanders over the past year, from the same database referred to by this article:

As mentioned above, most of the non-green decks run all the signets their color identity allows.  From the list we can see that popular non-green decks running Dimir Signet and/or Azorius Signet tend to also run Rakdos Signet (Nekusar, the Mindrazer, Jeleva, Nephalia’s Scourge, Marchesa, the Black Rose) and Orzhov Signet (Oloro, Ageless Ascetic, Sydri, Galvanic Genius, Kaalia of the Vast, Sharuum the Hegemon).

These Ravnican guild signets did not appear in Return to Ravnica and each signet bears the name of their respective guilds, so it is highly unlikely for the signets cycle to see a foil printing outside another visit to Ravnica, which probably would not happen within the next five years or so, a.k.a. a long, long time. So far they have been reprinted in Commander and Archenemy, both non-foil supplementary products.

I am of opinion that Rakdos Signet and Orzhov Signet are mispriced and are due for a market correction.

With the signets, we conclude the artifact segment of Hunting for Commander Foils series. Do comment on if you’ve enjoyed the approach I took for this article, and any suggestions for future articles are more than welcomed. You can find me @theguoheng or just drop a comment here.

Join me next week as I discuss the epic fails (and whatever little wins) I have experienced throughout my time in Magic finance and the lessons I have learnt from them. In the mean time, I can’t wait to finally unpack that Built from Scratch deck I have purchased over the weekend but have yet to find time to bring it out for a test run. Artifacts for the win!