Welcome back everyone for this weeks Legacy Hero.

Last week we went over a few things, including: the deck I’m going to build (Stoneblade Variant), touched on the legacy format pillars, how to free up some value for the trade binder by switching standard decks, and maximizing the resources at my disposal.

This week I want to go over what Pucatrade is, what to do with Sealed Product, showing the finalized legacy build that I will be working toward, and what to do with our standard stuff we added to the binder from the Jesaki Aggro deck I was playing last week.

I have only recently got on the Pucatrade banaaat is a great way to pick up cards. It is an even better way to turn the small stuff that is worth a little bit more than you would get on a buylist into big ticket items or the oddball cards that are cheap but hard to find like a Foil Children of Korlis (399 points). Basically, I’ve been listing the casual/EDH stuff, that is worth more than $3 and less then $10. Good example is the Foil Kaerveck the Merciless (839 points). Then there are the slightly more than worthless uncommons like Timely Reinforcements (47 points) or Essence Warden (96 points). I went through a bulk 1000 box that has been laying around my basement since the Gatecrash Prerelease, if I were to guess by the stickers on the box. I thumbed through it really quick, all the common, uncommon cards I thought that was worth more then bulk, all the foils and rares. The highlights of the box were Garruk, Primal Hunter, Teferi, Mage of Zhalfier, Cabal Coffers, and playsets of both Jorga, Treespeakers and Rite of Flame. To start my Pucutrade account I added all of these separated out items, a few emblems, and some tokens that I had.

Pucatrade also gives you a total of 600 points(one point is equal to one penny) once you do all the little things involved with setting up your account and shipping your first card, but remember that you are responsible for postage when you send something out, so I always try to trade multiple things to the same person. I have 743 points for shipping out 3 Portal Three Kingdoms Islands and requesting a Vision Charm to be sent to me. I’m saving points on here because I’m going to get a dual land out of this. I want to see how long it takes, and how much it costs in real dollars (shipping and materials) to get something that expensive. The Tropical Island from Revised is 21106 points ($211.06) and is supposed to be NM. Again, I am new to this concept, but I am excited to try it out for this project.

Next we have the deck selection. I have been researching the Stoneblade/Deathblade archetypes, trying to find the one that stands out the most to me. Most of the sources suggest that the Delver variant is just better. I’m not sure if that is true, but I haven’t played a Delver variant or a Stoneblade variant since Treasure Cruise was printed. With all of the UR Delver running around lately, I’ve been playing either The Epic Storm, Show and Tell, or my own personal favorite,a Stifle-naught Delver variation. That is the beauty of the legacy format. There are SO many decks you can play. I keep a stack of proxies laying around to test different decks before sinking a major investment in to an idea. I can’t have plain, sharpie proxies like a normal person since I found these http://zeerbe.blogspot.com/. The Proxy Guy’s stuff is absolutely breathtaking.

I have decided to build the UWr Stoneblade deck. This is mostly based on my personal play style, but also some research I have done, which I’m going to go over. The access to Pyroblast and Lightning Bolt outweigh Deathrite Shaman and Abrupt Decay in my mind. However, I will pick up a set of Shamans just in case the meta slows back down and lets the Deathrite Shaman build have the edge again. It does make some sense to snag a playset as a long term hold. The price has been steady and there is always the possibility of it being unbanned in Modern 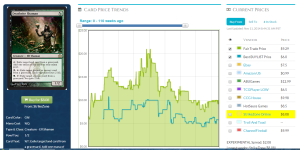 The other advantage of going with the UWr version is the cost of the mana base. Not having to get a couple Underground Seas and 4 Polluted Delta is huge. That is going to save at least $550.

Here is the base build I have settled on:

This deck lets us play with all of the new legacy toys like Treasure Cruise, Dig Through Time, and Containment Priest. Khans is as close to the bottom in price as it’s going to be,so anything Khans is worth getting now. The set as a whole is around $250, and 35 cards in the set are worth more than a buck. This is just a little more than the set of Theros, which has a about the same amount of cards worth more than a dollar.I can also build three different decks from the base of this one, so this another huge advantage to choosing this base.  Those three decks are: UWr Miracles, UWr Stoneblade, and UWr(Patriot) Delver.

Let’s take a look at core of the decks.

I already have the Flooded Strands from my standard deck I parted out. As for the Brainstorm, Swords to Plowshares, Pyroblast, Spell Pierce, and Counterspell, they are readily available and fairly inexpensive coming in around $25 for the lot. I will be looking to get these cards as throw ins whenever possible. Your trade partner won’t usually walk away from a trade if you push for him to toss in that beat up counterspell he has.

What cards, out of the high end needs like the dual lands, force of will, etc, do I need to prioritize? You can’t count on the kids that need to sell some of their legacy stuff to pay some bills to find the best deal. You have to look at all the options. The option that I like the best is to focus on whatever is the cheapest to get. The best deal, to me, is to trade for the beat up Tundra out of my trade binder instead of buying the one in the case. As it stands right now my trade binder is ill equipped to get anything except for a few Force of Wills and that would leave things a little thin. I’m more than happy to get the cheapest sleeve playable option. Once the deck is built, then I can worry about a NM FBB Tundras or Japanese foil Stoneforge Mystics.

Speaking of trade binders, let’s look at what I was able to add to it by switching to the Jeskai Heroic Combo deck instead of the stale Jeskai Aggro deck I was playing. (trade value followed by best buylist prices per mtgprice.com)

Out of those cards I’m going to keep the Flooded Strand and the Digs for the legacy deck. Stoke the Flame and Goblin Rabblemaster should move really quickly. I’ve been able to trade out any copies of those cards I’ve had for the past month or so. Temples have been slow but steady movers for me but great to have in the binder. Planeswalkers are another great staple to have in the trade binder.

I went to play FNM this past week but we didn’t have enough people show up on time to get anything going. Saturday was better since I got to play in a standard event that was offering the new Commander 2014 decks as prizes. 1st place got the first pick of the decks, and so on for the top 4. I really like the new Heroic deck. I was able to claw my way to 2nd place and I picked the white one. I’m going to wait until after the legacy GP to see if I need to part it out right away. I have my monthly  EDH game with friends this weekend. That will be a good place to look for some legacy stuff. These are mostly casual guys so I will be able to move a lot of the abstract stuff I have. I will make sure to take pictures of any trades and hopefully have enough time to upload my Legacy Hero trade binder online.

Shout out to  The Proxy Guy. He has this really cool Community Binder Project and is a master of his craft. I would kill for some of his stuff for my cube. @TheProxyGuy on twitter. http://zeerbe.blogspot.com/

One thought on “Legacy Hero #3”