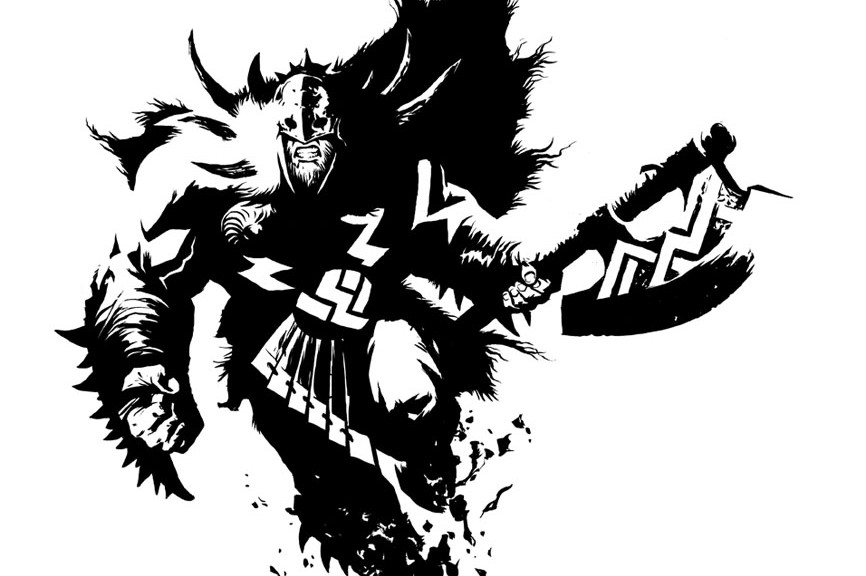 Duel Decks: Anthology was released back on December 5th and it was very exciting for me from a casual perspective. I love playing one-on-one Magic with my girlfriend and this product looked very appealing to us. What I didn’t know was that the price point was quite high for a product that is largely marketed toward the casual crowd. Not too many people are going to want to drop three figures on something that isn’t Standard legal. While I think that this product has avoided many of the pitfalls of Commander’s Arsenal and the less popular From the Vault sets, the limited release and exclusivity of the product make me question whether or not the MSRP of $99.99 is a good deal for what is in the package.

Let’s take a look at the current value of Duel Deck singles from the decks featured in the anthology:

Cards are listed individually on the various MTGPrice pages for the duel decks. See the links below for prices for individual cards. In particular, take a look are the pricier cards of the decks, such as the foils , cards like Demonic Tutor, and other hard to find casual staples that are played in either sixty card kitchen table decks or Commander decks.

These decks contain cards that appeal to all kinds of players. From Legacy staples like Daze, to Imperious Perfect for the elves players out there, even Demonic Tutor, the first four duel decks sure had some great cards in them. Based on their previous rarity, some of the cards in the decks actually were worth a decent amount of money just from the new artwork alone. The art on the duel deck versions of the cards is quite amazing and worth picking up if you favor the duel deck art over the original version.

In terms of value, adding everything up the total value based on MTGPrice Fair Trade value is $248. The total value based on TCGPlayer Median is $190 if you were to buy all the cards at retail value. Based on an MSRP of $100 this seems like a great buy in point for this product. This price is only considering the cards – the decks actually come with tokens and deck boxes to boot! When factoring in all of the flair you get along with your cards, $100 seems like a downright steal for all the product you are getting.

That is, if you can find it for $100. What have the sets actually been selling for at stores and online retailers? 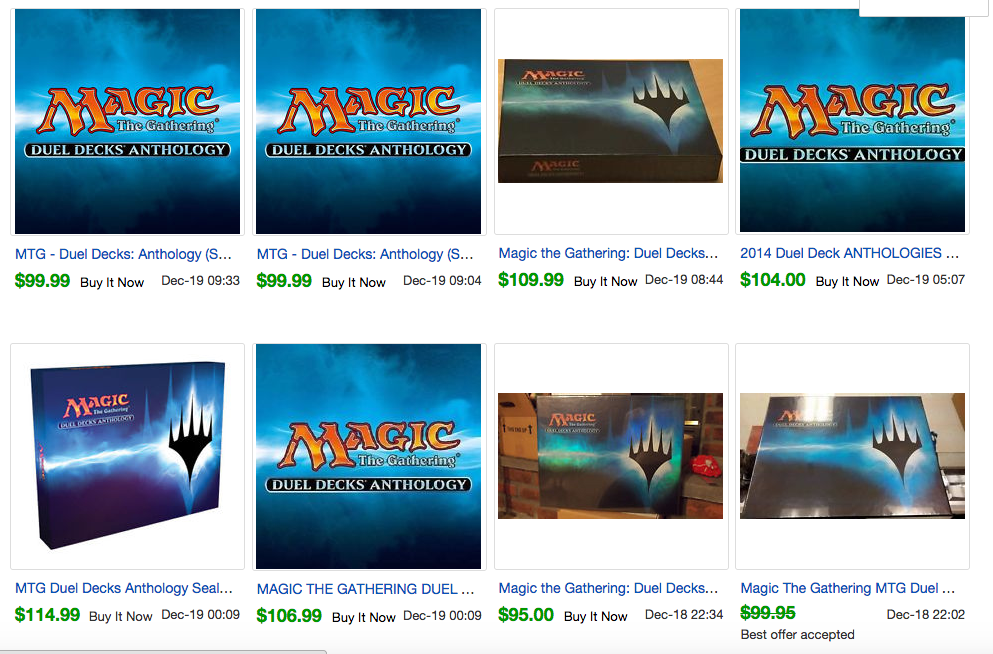 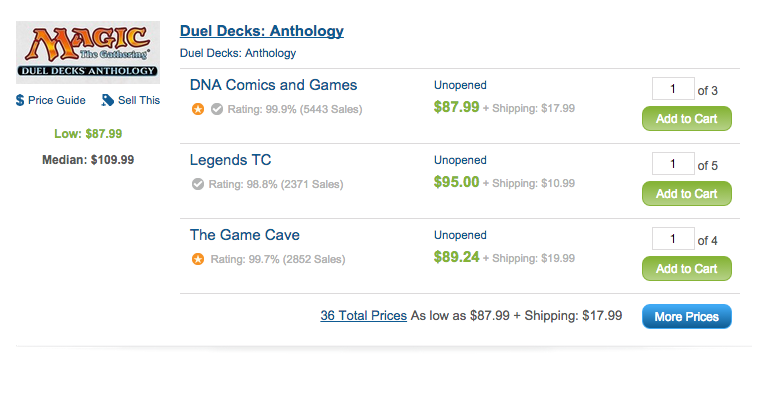 Starcity – $135 on sale (normal $150)
Channelfireball – Out of Stock
ABU Games – $120
CCG House – Out of Stock
Hotsauce – Out of Stock
Strikezone – Not Listed (assumed out of stock)
Amazon – $115 and up (many shops charging between $120 to $150 for the set)
Troll & Toad – I only saw singles listed for the various decks, the deck boxes, and the dice. If I was to guess, Troll & Toad just cracked all of the anthologies they received from Wizards and is only trying to sell singles through their website. Not judging here but it is certainly an interesting business decision for them.

For the most part, if you want a deal you can get one on this product by scouring eBay or TCGPlayer. It is starting to disappear from the market as evidenced by some of the bigger name retailers being out of stock. This leads me to believe that the product can go up in price over time if enough interest is generated from casual players.

Deeper Thoughts About the Set

OK, so let’s put all the information together so you can make the best informed decision as a consumer about Duel Decks: Anthology.

If you are in the market for Duel Decks: Anthology, look no further than eBay and TCGPlayer. Stores are looking to get rid of many of their products to help their end-of-year numbers in light of the upcoming Christmas holiday, and eBay / TCGPlayer is a good way to liquidate to make room after the pre-orders and reservations have been fulfilled for DD:A.

Stores know that people, particularly Magic players, are already strapped for cash based on all of the other presents and gifts that they need to pick up. After the presents, thinking about buying Magic cards for your hobby is probably a very distant thought at this point. If you’re one of the lucky people that can take advantage of this deal during the holiday season, I would snag one or two of these sets as close to MSRP as you can from the stores that can’t seem to sell them through their brick and mortar location.

Since the set is a limited print run it could prove to become quite expensive if many players try to pick up copies going into the new year. However, I don’t think this will be the case. This product is more expensive than a booster box, which means that many players are going to opt out of purchasing one since, well, you could just get a Khans box and be able to play with the cards in Standard.

One factor that adds value to the set is that it only contains a select few foils. Casual players, which the product is marketed towards, are the type of players that just don’t enjoy playing with foils or think that foils are ugly and want nothing to do with them. Since DD:A only contains a few foils and is mainly a non-foil set, casual players that hate playing with foils might later decide that they want to pick one up since they can easily play with the cards.

Could it become a collector’s item that always retains its value? Honestly, I’m not sure due to reprints being able to happen at any time. Hardcore collectors are going to want the original Duel Decks from the anthology since those are the first printing and will retain value based on the original sealed printings of the products. The only thing that this product offers is for casual players that wanted to buy the decks a cheaper way of picking them up. In a way, these are two opposing forces – casual players and collector items.

I’ve usually found that casual players want to play the game as cheap as possible but this set is $100 while trying to market itself towards the casual crowd. It is a set made up completely of reprints with the sole purpose of satiating the demand of casual players that wanted to pick up the original duel decks though couldn’t because they were too expensive. Yet need to spend at minimum $100 anyways… ? I’m not sure if the best way to do that was with a collector’s box of reprints.

At the same time though, SDCC planeswalkers have been a huge success and this product aligns with products like From the Vault that usually sell well as long as there are popular cards in the product that players identify with. To me, this set seems like a combination of Modern Masters and From the Vault – it contains a full set of cards that can be played together but at the same time contains cards way overpowered cards that couldn’t be reprinted in Standard without breaking the format.

At the end of the day, if you’re looking for a great way to start a collection, boost a collection, have a good time with your best friend, and yet still retain value for other formats (mainly Commander) where you can still play with the cards once you’re done, then this Duel Deck is a great option.

While the obvious play is to pick it up as close to MSRP value as possible, even if you buy it for $150 through Star City Games you are still making out well. As mentioned before, the TCGPlayer Median value of the decks is $190 without considering the tokens and deck boxes that come with the product. So if you are trading in cards for store credit or have additional store credit with a big retailer, feel free to use it to get this product.

Look no further than Duel Decks: Anthology whether you’re looking to pick up a ton of new decks to play with or if you’re filling out the remainder of your casual / Commander collection. For the price, it is much cheaper to buy this package then buy the singles online. While it may not be for everyone, if you do decide to pick one up many of the pricier and premium cards of the set will retain their price for quite some time.