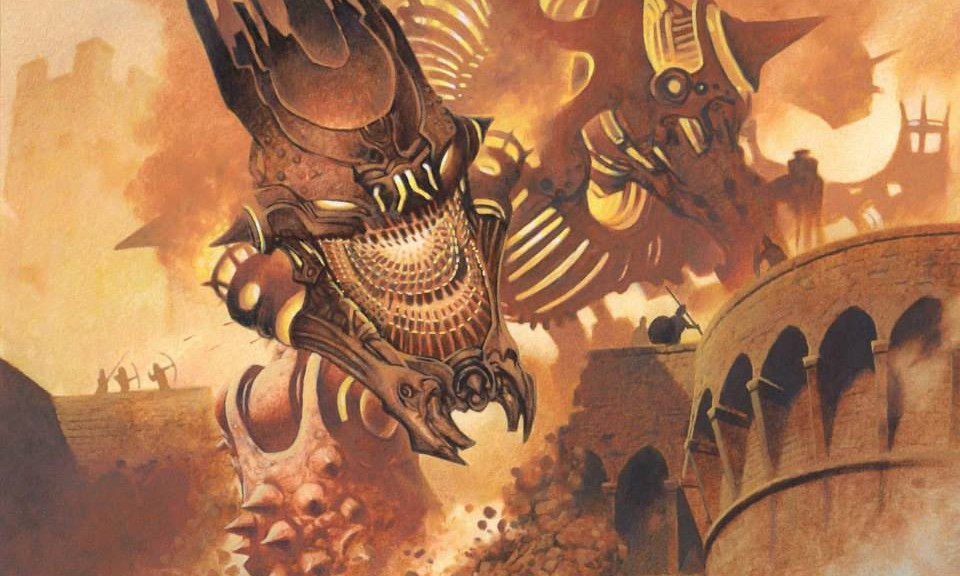 I was browsing MTGTop8 results and noticed that there were three major events that took place in Japan over the recent weeks – there were two Standard PTQ’s along with a large Legacy event that had almost 300 players. Let’s see what types of results have come from these events since they could be adopted by other regions for metagames. 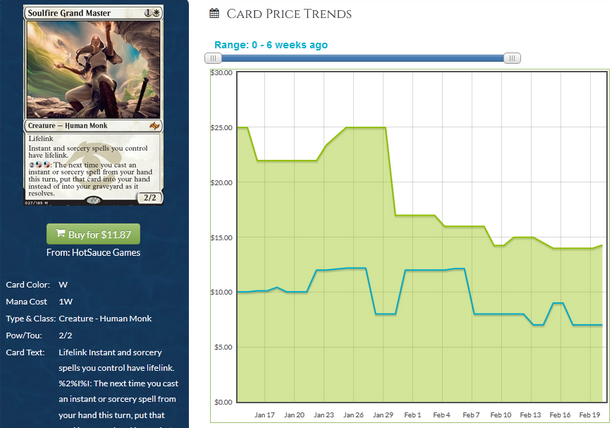 The cheapest current price is $12, a lofty fall from its preorder price of $25 and higher. Many have thought that the Grand Master was nothing more than a cute, gain-more card that was destined to fall pretty hard. While this is true, it has also proven that it can be a powerful card in Standard. Its inclusion in the second place deck along with another appearance in the Boros Aggro deck that made the Top 8 (with two copies appearing the deck) is making me seriously consider this card’s playability in future Standard events.

Cheap casting cost mythic rares can be hit or miss. However, I really think this card has struck a chord with spikes and has incredible casual appeal. Remember that time in your Magic playing career that you loved gaining life? This card takes that desire to a completely different galaxy of possibilities for the casual players among us.

While I believe that the Grand Master has some room to drop as Fate Reforged continues to be opened, if it starts going into the single digit ranges I’m going to be watching it very closely as a potential pickup. It has current and future Standard value as well as casual appeal. To me, these are all signs of an undervaluation if the Grand Master continues its price descent.

Soldier of the Pantheon – This card also made an appearance, in both Jeskai Midrange and one of the Abzan Midrange decks. Soldier currently sits at around $0.83 retail, with many copies listed at $0.75 or less. There could be potential for a spike in the short run if Soldier turns out to be good in the new metagame, and if that happens it will be the time to get rid of any copies of Soldier that you have. I don’t expect it to become a Modern or eternal mainstay so the last chance to get value out of Soldier will be in the coming months.

Wedge Tap Lands – Wedge tap lands are seeing play in nearly every deck due to the three color nature of the format. The time to get in on wedge tap lands en mass is coming soon. Even Sandsteppe Citadel, arguably the most widely played wedge land, is only around $0.50 retail. If you can pick up these lands for $0.40 or less it will be a great addition to a long term spec box.

Rakshasha Deathdealer – Another card that appeared in several decks, the power of Deathdealer in the new format cannot be underestimated. It is one of the best shades that Wizards has printed and it could really shine in Standard at some point. At $1 it seems like a very good pickup for future gains.

Archfiend of Depravity – Three copies of this card showed up in an Abzan Midrange list, which is surprising since I didn’t figure that that this card had constructed potential. Due to the inclusion it makes me want to watch the card closely over the next few months in case it pops up anywhere else.

Kolaghan, the Storm’s Fury – The dragon appeared in the sideboard of the Mardu Control list. In addition to constructed playability, Kolaghan will also be popular with the casual crowd. This will enable it to retain a fairly decent price even if it doesn’t see much Standard play. I like foils here if you can get them on the cheap.

Citadel and Outpost Siege – Many players are hyping the red siege (Outpost) since it brings Chandra, Pyromaster’s best ability out as an enchantment, which is generally harder to remove. However, Citadel Siege should not be overlooked. In aggro decks this card really shines as both modes can be useful to you throughout the game. I’ll be keeping a close eye on Citadel Siege as Fate Reforged results continue to roll in.

Soulfire Grand Master was seen at the top tables at this tournament too, being featured in Boros Aggro as a playset. This furthers the idea that it could have Standard possibilities.

Monastery Mentor only showed up in Jeskai Tokens, which means that he is not quite as popular as Goblin Rabblemaster in the current Standard. This leads me to believe that his price will come down a bit more over the coming months. I would watch out for any good deals through the summer because even though Mentor isn’t a powerhouse in Standard now we all know that he will be quite good in the future once Rabblemaster rotates.

Death and Taxes took down the event. Thalia has been slowly rising to close to $5 retail and I expect this upward trend to continue. She is not going to get a reprint in Modern Masters 2 while still being a widely played Modern and Legacy staple.

Mother of Runes was just announced as reprint in the upcoming Elspeth vs. Kiora duel decks, so I expect her to trend downward in price in the coming weeks based on the announcement. Leonin Arbiter is a hard call – at $1.50 retail it is very cheap for a card that occasionally sees Legacy play and definitely sees Modern play. However, I think many vendors and players are speculating its inclusion in Modern Masters 2 which has kept the price suppressed. Just last December the card was at $4 and seemed to be gaining in price. Then all of a sudden it dropped back down to $1.50 and seems to keep lowering. 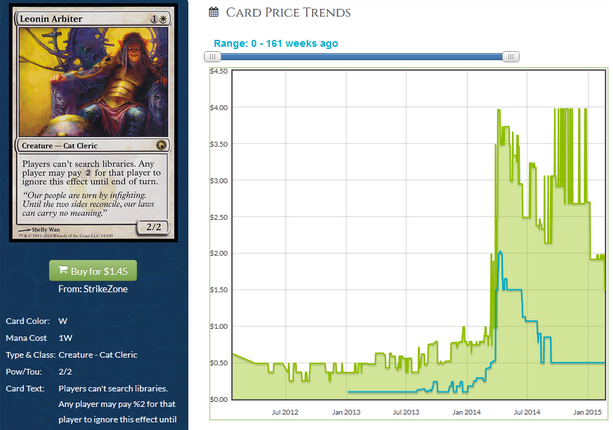 So what happened? Its hard for me to put an exact reason for Arbiter’s price history, but it feels to me that his price reflects the wax and wane of the Hate Bears deck in Modern. Once Treasure Cruise was banned and the format shifted towards BGw Midrange Decks, Arbiter again found himself on the sidelines.

Historically, his drop in the middle of last year was leading up to Treasure Cruise and the general lack of large Modern events, and once the Hate Bears deck started doing well against the Treasure Cruise format he then shot back up to the $4 range. Of course, this is all just a theory – it could very well be the case that vendors just kept getting bought out at particular times which explains the temporary price spike of the card.

All in all, this tells me that Leonin Arbiter is a card that should be watched very closely for future gains or losses. Its volatile past tells me that the card could swing easily one way or the other depending on the direction that Modern or Legacy take.

Other notables from the tournament include a second place Merfolk list and Grixis Control placing in the Top 8 along with changes to Delver archetypes.

Merfolk made some interesting choices – main decking Waterfront Bouncer, Choking Tethers, and Chalice of the Void. It appears to to be a straight beatdown deck, playing four True-Name Nemesis and three Cavern of Souls in order to get the beats on. The sideboard included Ensnare and Back to Basics, cards I haven’t seen in a while in a Legacy Merfolk sideboard.

Grixis Control is playing Tasigur, the Golden Fang, Goblin Rabblemaster, Counterspell, and Dack Fayden along with a slew of one mana cost spells including Inquisition of Kozilek in order to control the early game. Mainly, the deck showcased that Tasigur and Rabblemaster are also Legacy playable apparently.

Delver decks now are splashing black for cards like Deathrite Shaman, Tombstalker, Cabal Therapy, and Tasigur. One version did strictly stay UR and opted to play three Dig Through Time over two or fewer to get the maximum effect out of the Delve keyword alongside cards like Gitaxian Probe and other cheap spells. Delver is still alive and well as one of the top decks of Legacy.

Its interesting to analyze different metagames in order to expand your knowledge of what possibilities for deckbuilding are out there. Even though non-Japanese metagames may not mirror the results that appeared across the three tournaments I covered, there are still some interesting trends that should be noted so that they don’t surprise you later down the road. If you’re interested in any of the decks or strategies that did well in Japan then you will want to get in on cards that are cheap now and look for good deals on cards that are currently overpriced.

3 thoughts on “Results from Japan”