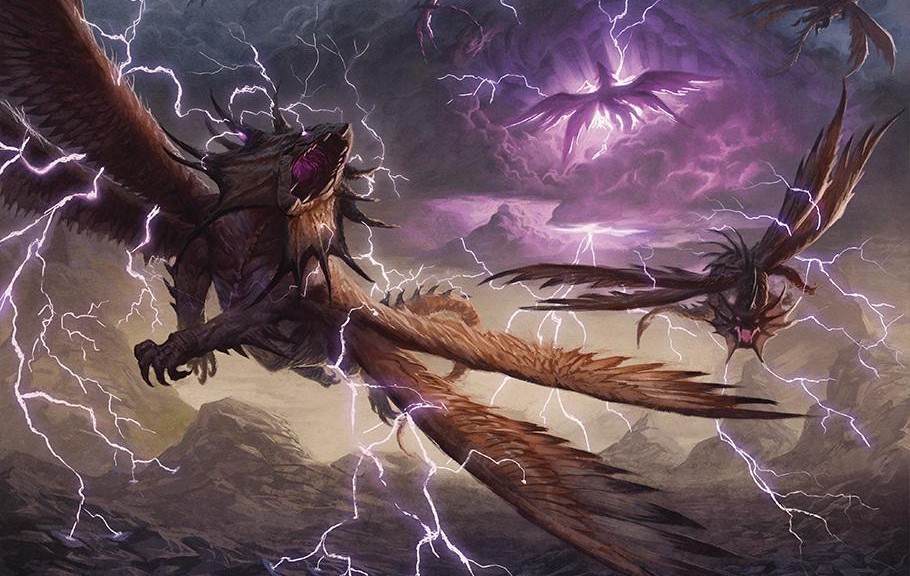 I started out this week planning on writing about GP Miami, reviewing what had done well and placed in the top sixteen, and providing some outlook on Standard cards for the next few weeks. It was while working on my Dragons of Tarkir review that I realized this was a foolish endeavor – with Standard about to change again, who knows what will be good in a week? An entire brand new set is around the corner, and with it will bring an evolving metagame. Rather than spend all day today reviewing a Standard that’s about to evolve, I’ll touch on it briefly, and then provide a look at PAX East through a financial lens.

The biggest winners to come out of this weekend were Whisperwood Elemental and Mastery of the Unseen. Whisperwood already doubled a few weeks back, but he’s crept up from the $11-$12 range a week ago towards $13-$14. It’s completely safe to sell excess copies here. There’s an outside chance he climbs towards $20, but why get greedy? Take your profit after he took down the top two slots of a Standard GP and move on.

Mastery of the Unseen, by the way, should already be in your trade binder or for sale somewhere. Prices have already started dropping in the last few days, as many expect it not to hold the short term. It may have rocked the GP this weekend, but nobody is going in blind next week. There will be plenty of hate for GW Mastery decks, and that will make it tough to put any copies into the top eight.

One note on this topic is that while Mastery, and the deck as a whole, may contract in the coming weeks, we should remember through the summer how well it performed. Supply is high and Mastery is part of an in-print set, so prices are currently restricted. If numbers have fallen off to sub-$1 by July or August it may be wise to snatch some up. A great deal of the deck in its current form is from Theros, but Mastery and Whisperwood are really the key cogs in the machine. As long as BFZ brings us green mana producers and a single card with a mana sink like Genesis Hydra or Polukranos, the deck may explode again.

At this year’s PAX (don’t go to pax), Wizards once more dropped a load of spoilers on us, including the aforementioned Battle for Zendikar set in the fall. Even without formal confirmation, there are a few things we can almost completely count on:

Last we saw the Eldrazi, they were busy consuming Zendikar while our intrepid heroes ran away. Heroically, I’m sure. I have no doubt they’ll still be hanging around munching on the scenery this time through. The Lithomancer’s story from the latest Commander product tells us that Kozilek, Ulamog, and Emrakul have been around for a very long time, so I’m guessing we’ll see revised versions of them rather than a new slew of legendary Eldrazi. I’m also anticipating a new mechanic that isn’t Annhilator, since that is just a zero on the fun scale.

Our important takeaway here is to keep an eye out for giant-monster enabling cards. I particularly like See the Unwritten, which I’ve picked up several sets of for myself. Summoning Trap saw play on and off in Zendikar, and hit a price of maybe $3 or $4 at it’s peak. Trap was a rare though, while Unwritten is mythic. Being a sorcery stinks, as does having to actually pay for it, but on the plus side, you get to flip two creatures if you have Ferocious enabled, and the cards go into the yard, which means you are enabling a boatload of Delve. In fact, an Unwritten completely powers up a Treasure Cruise on its own. Meanwhile, keep an eye out for other cards in Khans that may be particularly powerful in a set with landfall mechanics or gigantic creatures. Knight of the Reliquary was cheap as dirt before the fetches of Zendikar rolled around, and then she hit $20. Fetches are already in the format so we aren’t getting any boosts along that line, but similar “plays well with the next block’s mechanic” spikes may be out there.

A good lesson to learn here is that cards don’t actually have to be good in order to rise in price. Speculation alone could push Unwritten into the $5-$8 range if people get excited. If you had picked up cheap copies ahead of that, you could dump into the hype, and then not care one bit whether the deck actually put up results. As long as expectations are there, the price will be there, and that’s all we need to care about on a spec like this.

Fetches are highly likely to show up. It seems weird running them back-to-back, but there’s a developmental advantage to this. Putting the fetches in running blocks reduces the number of sets that they have to design with fetches in mind. Those lands set constraints about what cards work and don’t work, and if you do one right after the other, you get overlap. Khans already works with fetches, and so will Zendikar, so putting them next to each other means you have to spend less time working within those particular parameters.

Subsequently, now is the time to move all your spare Zendikar fetches. The upside of holding on is so small, so remote, that there’s just no reason to expose yourself to so much risk. I’m holding onto my personal sets, because I’d rather have them and burn some value than deal with trading them away and reobtaining, but I recognize that decision may not be for everyone. If you decide to sell, get them out there, cash out, and move on to greener pastures. Like See the Unwritten. Hah.

A return of full-art basics won’t devalue the ones you have, but it will make them grow a lot slower. Up until now I’ve been holding all of the ones that came through my possession, hoping they’d climb into the $4-$10 range like the Unhinged ones did. There’s no chance that coming to pass now though. I don’t plan on selling mine, because I like having them, but if you can get reasonable numbers for yours, you shouldn’t feel bad about moving them. A second batch of full-arts means we’re almost never going to see Zendikar full-arts worth more than two or three bucks. Foils will be completely immune to all of this though. Don’t sell those if you can avoid it.

Not a lot to say about Allies and Landfall at this point. We can be relatively sure they’re coming, but I’m not sure how to capitalize on that financially at this point. Maybe Harabaz Druid jumps? I don’t know.

Two questions I’ve been asked at every single Magic event I’ve attended in the last few weeks: “Is Goyf in MM2, and if so, what will his price be?” The former was an easy answer, and the latter is far trickier. If you’ve been reading MTGPrice for awhile you may remember I talked about how Goyf would actually increase in price due to his presence in the first Modern Masters run. This time around I’m less sure.

Part of the original reason Goyf increased in price was because the presence of Modern Masters brought a lot of new players to the format, but it didn’t give out enough copies of Goyf to satiate the new demand. For every ten people that started building Modern decks, only one set of Goyfs was opened. The result was that demand further increased its lead over supply. This time around, there will supposedly four times as much MM2015 as the original MM, although I can’t find the source for that. Assuming that’s somewhat accurate, with so many players already invested in Modern, and a much larger print run available, it seems as if far more supply will be added to the system than demand this time, which of course results in lower prices. Yes, pack prices are higher by $3, which would work to increase the cost of Goyf, but I’m not entirely sure how much of an impact that will ultimately have.

If I’m right, and Tarmogoyf does drop in price, how low is he going? While his price feels insurmountable at $200 today, keep in mind it wasn’t too long ago he was $130. 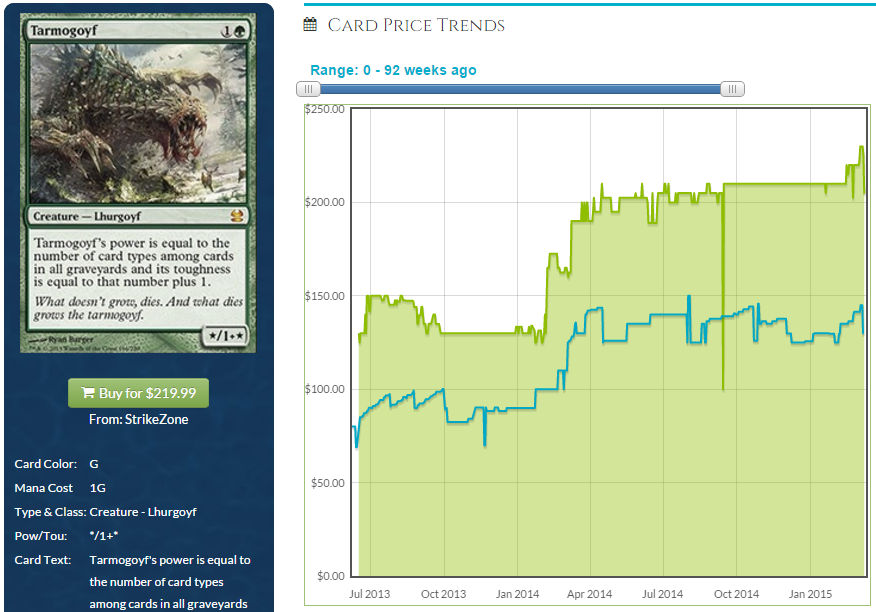 A little over a year ago, last January, a Modern Masters copy was as low as $130. Future Sight copies were similarly discounted. I expect we’ll drop back into that range, and perhaps even slightly lower. My broad range on his price, once settled, is in the $100-$160 ballpark, with $120-$150 the more probable range. This of course is purely speculative, and you should treat it as such. I could end up way off the mark here.

Karn Liberated is joining us again this summer as well. We weren’t sure if he would be in MM2015, but it was reasonable to expect he’d show up somewhere this year. You definitely want to be getting rid of copies. While Goyf’s price is in question, Karn’s is most certainly not.

One more point I want to make regarding MM2015 is the density of playables. The original Modern Masters had fifteen mythics, of which nine were constructed-viable. (The five Kamigawa dragons and Sarkhan missing the mark.) That’s a 60% rate of useful mythics. About twenty-ish of the rares were playable outside of FNM, for a rate of near 38%. For a set that’s designed to reprint format staples and put important cards in player’s hands, those numbers feel rather low to me. Only twenty-nine total constructed relevant rares and mythics? I’m going to run through the latest Modern IQ and pick out all of the rares and mythics that I think may need a reprint within the next year and see how many I come up with.

That’s twenty-one viable reprint targets, twenty-five if you consider the entire cycle of Worldwake manlands. Keep in mind this is only one event, too. I’m sure if I went through a few weeks of Modern IQs I could find plenty more cards in need of greater supply. The takeaway here is that not everything is going to be reprinted, and there are quite possibly going to be more cards that spike in price because of their absence rather than cards that crash because of their inclusion.

Origins will bring it Legendary-Creature-into-Planeswalker flip cards that should all be quite nifty. I sort of expected the front of Liliana to be GW, given that she’s wearing Selesnya colors in the artwork and everything, but I suppose that would violate color rules handily. Not much to discuss on the Planeswalker front; they look cool and will probably be expensive.

With flip cards back on the printing press, It’s possible to see a return of Delver of Secrets. Even though I’m sure Wizards isn’t keen on introducing the menace to Standard again, reprinting them is a pain in the ass, and they may take the opportunity to do it while they can. We’ve had a real paucity of good cheap blue and white spells in Khans, which may hint at a return of Delver.

I’m not sure what to make of Garruk Relentless or Huntmaster of the Fells returning. Both are marquee flip cards, but would take up valuable mythic slots, and not fit into the origins timelines whatsoever. I’d lean towards them not appearing, but time will tell I suppose.

Alright, that’s a good overview for today. The full spoiler will hopefully be up before next Wednesday, so I should have my Dragons of Tarkir review up next week. In the meantime, I’m going to go enjoy the first few days above 32 degrees fahrenheit in five weeks.