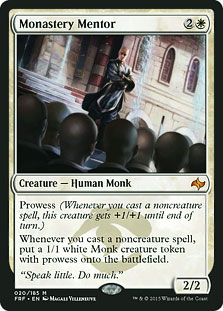 So from what I’ve been hearing recently, our recently released friend Monastery Mentor is quite the adventurer. Since Mentor hasn’t found a home in Standard yet, the card has felt the need to travel to far and distant formats in order to become the best. Based on the nature of cheap cantrips in eternal formats, it seems to have positioned itself as the next Vintage powerhouse, along with breaking into Legacy and Modern.

For the Vintage adventures of Monastery Mentor, I will direct your attention to this event in Rome. Only 71 players attended the event, but being sanctioned Vintage we can consider this a pretty big tournament. Monastery Mentor was the namesake of not one but four decks in the Top 8 of the event! It’s kind of crazy to think that a non-blue card would make such an impact on Magic’s oldest format. Let’s be honest, once we knew how crazy Treasure Cruise was in Legacy everyone knew that Mentor in Vintage was also going to be busted. Blue-Red Delver was a Tier 1 deck in Modern, Legacy and Vintage before the banned list update, so even after that restriction took place it looks like we have a more balanced card that has come in and again completely changed the format.

I think the Vintage Mentor deck was able to come about since Gush is no longer restricted in the format. Gush has opened up the doors for decks to really push their card draw engines to the max. The Monastery deck can either take the U/W route or splash red for cards like Dack Fayden and Red Elemental Blast. Either way, it seems like a spicy brew that is well positioned in the current metagame.

Two versions of the deck were also playing the somewhat forgotten Mystic Remora, a card that is also pretty decent in Commander and casual formats. They’re pretty cheap in paper at $0.25 or so if you’re looking to pick some up you can’t go wrong getting in at bulk prices. Vintage isn’t exactly a format that affects prices of non-foil cards at all, so the real reason to pick up Remoras is for casual and Commander appeal since it only has one printing.

What does this mean for the future of Monastery Mentor’s price? Well, I’m thinking that foils of Monastery Mentor are starting to look very appealing. Even at $55 I believe that they can up further over time. The reason is because Mentor is also up and coming in Legacy and Modern. Let’s take a look at some recent results to see where Mentor is played.

*Typo in decklist (should be listed as Monastery Swiftspear in UR Delver), ignore all references to Mentor in Legacy UR Delver.

Recent results from the Legacy GP, where ~2,000 players participated, have also indicated that Mentor is the real deal. He was played as a playset in UR Delver (splashing white just for Mentor) and Stoneblade in the Top 8. In fact, the Stoneblade deck was so radicalized by Mentor that it doesn’t even resemble a typical Stoneblade list. No True-Name Nemesis, no Delver of Secrets, and the only equipment to tutor with Stoneforge Mystic is Batterskull. Looking at the Stoneblade list, we can also see the Counterbalance / Sensei’s Divining Top package along with Terminus in the deck. All together, it looks like a cross between Miracles and Stoneblade rather than being a Stoneblade list. Still though, if the direction of Legacy is going this way with Mentor as one of the key cards in a tempo and control shell, I think it has a bright future in the format.

First let’s take a look at the Esper Tokens list from Providence since it placed at a Premier IQ rather than a local states tournament. Playing four copies of Monastery Mentor, this deck was able to secure a Top 8 spot. A spin on the black/white tokens lists that have been floating around since Bitterblossom exploded in price, this deck is a control version of the tokens list. This makes sense considering Mentor rewards you for playing tons of noncreature spells. Looks like Vault of the Archangel made an appearance here too, which is pretty funny when you have a ton of Mentor tokens  and opponents are trying to get through your deathtouching army. Tasigur is a nice backup that allows you to recur those spells and keep making tokens. Not that this is necessarily the best version of the Mentor deck in Modern, but it did place the best and the States Results also featured more copies of Esper Tokens making Top 8’s than other decks playing Mentor.

Speaking of States, let’s take a look at the decks that featured Mentor besides Esper Tokens.

So there you have it: my thoughts on why the foils are looking good as pickups. I’m not sure if Mentor foils have room to drop with all the potential they have in Eternal formats. I would look for any deals locally or online to see if you can potentially trade for them, since many Standard players are looking for cards that are good in Standard and are probably more willing to trade Mentor since it currently isn’t featured in any Tier 1 decks of the format.

Speaking of Mentor in Standard…

Yes folks, I believe there will come a day when Mentor will be insane in Standard. That time might not be now but I think it is slated to come in the future as long as the proper support is provided in this new (somewhat extended) Standard rotation. Is $15 for non-foil Mentors the low point buy-in? I’ll admit, it might not possibly be the lowest. At the same time I have a hard time believing that it will drop below $10 into the single digits. The extra $5 now to secure your copies could definitely be worth it in the long run if the card breaks through $20 and more during its Standard life. Again, trading for copies is going to be your best bet. Similar to the foil versions, Standard-only players are going to be more willing to trade them for cards that see play in Tier 1 decks.

Finally, Mentor of course has casual appeal. Like Young Pyromancer, which is a $3 uncommon despite being printed into oblivion in an event deck, this card is going to garner plenty of casual demand due its token-generating abilities. Though only average in formats like Commander, it can still hold its own and help you stabilize the board if you’re able to stick Mentor for a turn or two.

All in all, I can’t fault anyone for picking up copies of Mentor now whether they’re foil or non-foil. Buying with cash is a tougher decision but trading for these guys is a no-brainer in my mind. Even though there is a possibility of a price decline based on the direction that Standard is taking, I believe that foils won’t be dropping much due to the Eternal format applications of the card. Also, even if Mentor does drop in price, I can only see it as a short term decline. It has a very high chance of going back up later in its Standard life, especially when Theros goes away.

That’s a wrap for my current thoughts on Monastery Mentor. As always guys, let me know what you’re thinking in the comments.

12 thoughts on “The Timeless Adventures of Monastery Mentor”