Last week I talked about the seasons of weather and how they affect standard card prices over their life time.  There are a lot of other factors involved with some cards that don’t follow the weather pattern.  I had a lot of feedback asking why I didn’t use more cards.  The truth is it was really difficult to pick another card from Theros that fits the usual price pattern of cards from a fall set.  Some cards, like Thoughtseize and Ashiok, Nightmare Weaver see play in Modern.  Some cards, like Thassa, God of the Sea and Erebos, God of the Dead quickly fell out of favor.  And then the third group of cards, including Elspeth, Sun’s Champion and Hero’s Downfall saw big reprints despite never leaving decklists.  The card that follows Stormbreath Dragon the closest would be Xenagos, the Reveler.  He stayed relevant after his post-rotation high of about $20.  But he still was quickly phased out once people realized the decks he preyed on don’t exist anymore and less costly cards threatened him quickly and often.  While it is hard to truly predict what every card will do, there is a pattern to the rise and fall of most standard relevant cards.

But enough about Standard, let’s talk Modern!  It’s the glamorous format with some of the game’s most powerful creatures and spells and no rotation!  That means if you buy a deck it will always be good in Modern!  Forever!  That’s what no rotation means, right!?  Well not quite.  Your deck may not always be good, and your cards may not always be worth something.  That’s unfortunate nature of the beast that is Modern.  But there are some good patterns to notice that can cause card prices for Modern to quickly spiral out of control.

For this lecture I will need help from the audience.  Any Modern card out there want to volunteer?  No?  Nobody?  Well let me just look through my list of “Biggest misses of Modern Masters 2015″…  Ah yes, how about Serum Visions?  Everyone’s favorite $13 common! Well would you look a those beauts!  No, not these Beauts.  Those beautifully crafted number markers made by my exquisite MSPaint skills.  I decided this time to mark out some important events that influenced the cost of Serum Visions.  As you might notice, there are a lot of peaks followed by a mostly steady price.    The numbers here are important events in the price history of Serum Visions.

The date was March 7th, 2014.  It was probably a cool day in Richmond, Virginia.  I don’t know exactly; I wasn’t there.  StarCity Games was hosting Grand Prix Richmond.  This Grand Prix was one of the (if not the) largest Modern Grands Prix ever.  You know what happens when a ton of people gather in 1 place to play Magic?  They buy and sell a ton of cards!  Serum Visions had been on a steady upward trend but it was evident that stores couldn’t keep them in stock.  Boom, StarCity ups their buylist price and purchases Serum Visions from everyone in the X-3 bracket so they can go play other side events.  You can think of StarCity as the bad guy in this situation if you want, but eventually it was going to get there.  The real gritty truth of a buylist price is if it’s not high enough to keep a card in stock then players think it’s worth more than it costs.  We will see that is a common trend for eternal cards.  When supply is low, the best way to get them in stock is to buy them at large events where the card density is high.

You know what else happened at this event? 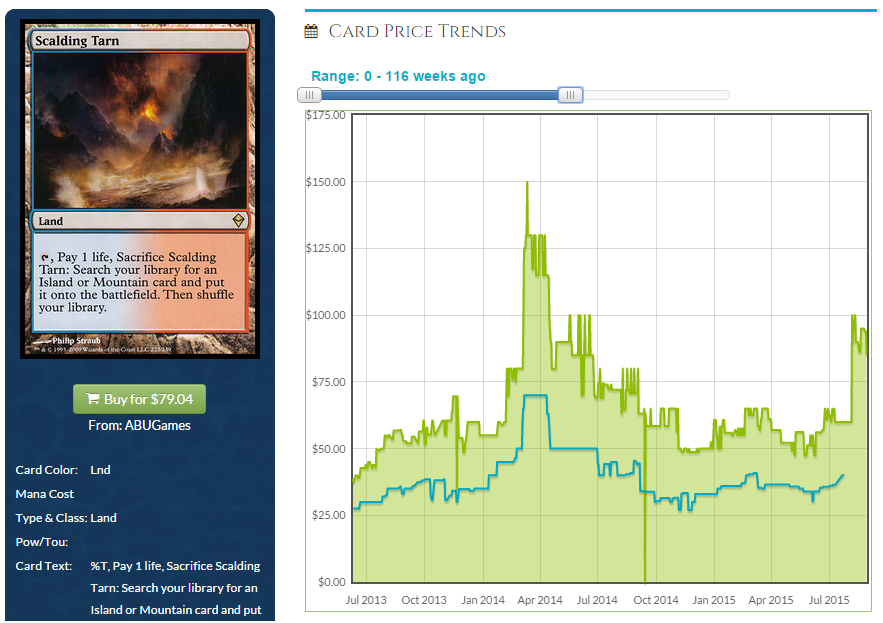 The spike of blue fetchlands also happened at this event.  You could buylist them to vendors for up to $75.  This overshadows a lot of other cards that also increased in price.  Obviously, we can see that the price point didn’t stick.  Khans of Tarkir fetch lands were announced later that year and eventually the Battle for Zendikar block which lowered consumer confidence in the prices of Zendikar fetch lands.

A lot of players expected Serum Visions to be in Modern Masters 2015.  The anticipation of a reprint can suppress the price of a card almost indefinitely.  It’s like a rubber band that is constantly being pulled back.  If people expect Wizards of the Coast to reprint the card and they don’t it snaps.  When the full spoiler for Modern Masters 2015 was released and didn’t include Serum Visions, people went crazy! Fifth Dawn  was released 11 years ago.  There is just not that many copies of the cards from that set.  Serum Visions, despite being a common, probably has less copies in circulation than Engineered Explosives, Vedalken Shackles, and Crucible of Worlds because they’ve all been reprinted.  Once again, the price stuck and people continued to fill out their blue deck lists with “4x Serum Visions”.

I didnt mark this on the graph but you can see it pretty well. The date was June 13th, 2015.  It probably wasn’t cool in Charlotte, North Carolina.  I also was not there, despite my love for the Modern format and my reasonable proximity to Charlotte.  Once again, StarCity games holds an enormous Modern Grand Prix.  As they often do, card prices increased after a weekend of increased buylists.  It was obvious that there was huge increase in the price of the card.  Consumer confidence was high it would not be reprinted.  This coupled with the fact that Modern PPTQ season was about to start caused another buying frenzy.

After a snapback from a brief $20 price point, people realized that it probably wasn’t worth that much.  The FNM promo Serum Visions coupled with the fact that Modern PPTQ season is winding down caused a small decay in the price.  It’s unknown if it will continue to drop through the summer but  I would be mindful of the price after Grand Prix Pittsburgh ( the last Modern Grand Prix of the year).  If it starts to keep a steady price, it’s likely it will stay there until a reprint or big event.

Well, we can see here, that unlike Standard cards, the weather does not play a large factor into the price of a card.  Consumer confidence and large events have the biggest impact on card prices.  I would be mindful of GP Charlotte 2016 (May 21-22) and the summer supplementary product.  It’s unclear if we will see Modern Masters 2016 or something more like Conspiracy 2.  According to this annoucnement, Modern PPTQ season is from June 16th until October 9th.  I would recommend looking to finish up your Modern deck during the spoiler season of the 2nd set of the “Tears” Block (which is the un-announced block after Battle for Zendikar).

Although I didn’t go into a lot of detail, if you look at the price graph for Zendikar fetch lands you will see a similar slide as people think it’s going to be reprinted.  It is followed by a huge spike as it is confirmed to not be in Battle for Zendikar.

The Battle for Zendikar

But who wants to talk about spoilers?! I know I do! 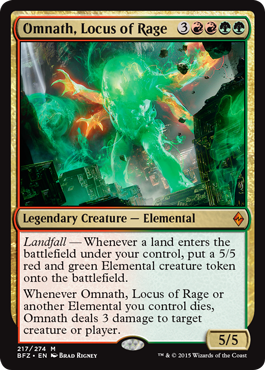 I’m not gonna talk about everything, but this guy looks great! Yeah it’s only a 7 mana 5/5, but it’s got a lot of value going for it.  We will have Explosive Vegetation and Nissa’s Pilgrimage to help ramp out this bad boy.  He combos well with fellow elemental, Whisperwood Elemental.  To top it all off, he’s a great alternative beefy guy to hit off See the Unwritten.  I think Omnath will give Dragonlord Atarka decks another dimension that lines up pretty well against Ugin.  The fact that the original Omnath is a pretty popular character bodes well for his price point.  I don’t know what pre-order prices will look like when the article releases but anything $8 or less seems like a fine time to buy in if you want to play with this guy.