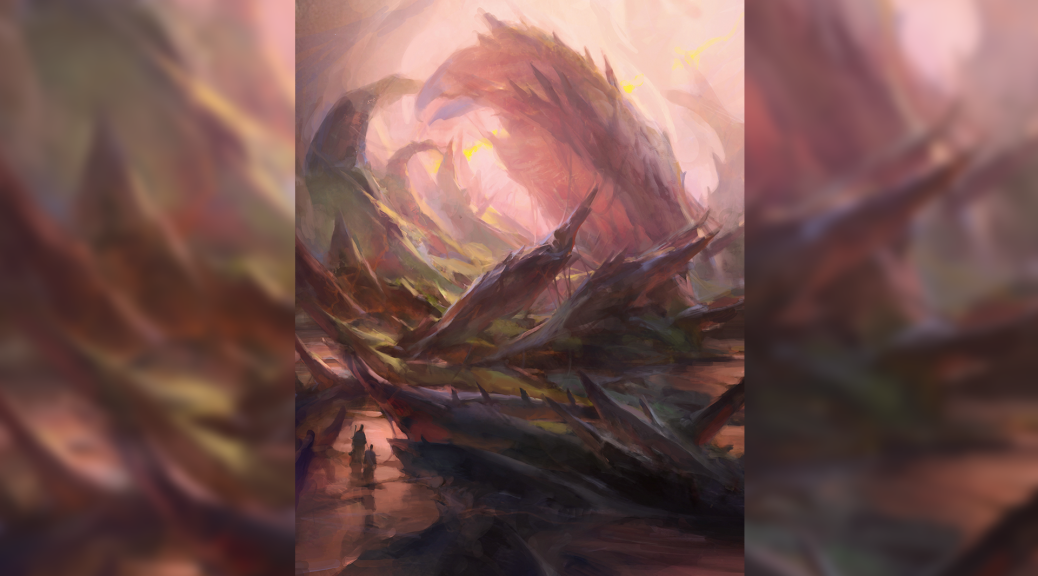 In a recent article I asked for players to leave questions / future topics in the comments and a handful of you did. The question that sparked the most interest (for other commenters and me as a writer) was how you should go about choosing what cards to acquire first in Modern.

Most people will tell you to acquire the lands first, because they give you the most options going forward. For example your Temple Garden can go into a variety of Bant decks, Bogles, Naya, G/W hatebears, assorted Abzan decks and much much more. Getting cards that you can use in a number of places is always a great way to start. But approaching the format this way put’s a big fat wall in front of new players as lands are not always the cheapest thing to acquire and there’s a good chance that if you go in blind, you’re going to end up with some extras that you don’t really need.

For the last year and some change it’s been a great idea to pick up the fetch lands from Khans of Tarkir. You’ve already missed “bottom” on these, but they’re still extremely useful going forward, but which ones are the most useful?

Fetch lands are an oddity when it comes to deck construction, you’re going to get 95% usefulness out of a fetch land that is one color off in most decks, but that 5% reallly matters if you’re playing competitive level tournaments. You can easily substitute a Flooded Strand for a Scalding Tarn if you’re playing Splinter Twin, and for local weekly tournaments it’s hardly ever going to make or break many games for you. Burn decks generally don’t even care which red fetchlands you use.

MTGGoldfish.com has tool that ranks lands by how many archetypes they’re played in and you might be surprised that the most expensive isn’t the most commonly used. While I would recommend strictly following the percentages if you were a deckbuilding robot looking to optimize the order in which you completed ALL decks, I think it’s better to pick what types of archetypes you enjoy and see where the overlap is:

As you can see, there is a lot of overlap between the fetch lands and you’re not going to be disappointed owning four of any of them. That said, you don’t necessarily need four copies of all of them. If you’re looking to play Abzan decks, for example, Verdant Catacombs and Windswept Heaths are your primary choices and Marsh Flats is your tertiary fetch – you only really need two copies in most builds. Arid Mesa is in a similar position in most decks that include it outside of Burn, which doesn’t care which fetches you use.

By just shaving two copies of each of those out of your “Modern playset” list, you’re freeing up $160 in value that you can be allocated elsewhere.

Shock lands are interesting to look at because the numbers ultimately reflect something that emotionally we’re blind to: you don’t need them all. When Return to Ravnica rotated out of Standard we all snatched up as many shock lands as we could because they “were a sure thing” just like those Zendikar fetches that we’d seen skyrocket. As it turned out–not so much. This was mostly due to the fact that in Standard we were playing four copies of each and that is not the case at all in Modern.

Especially with access to all ten fetch lands, the need to run more than two of any shock land is rare and typically only shows up in the strict two-color decks. Even then, it’s more likely that you’re going to run three copies rather than four. So let’s take a look at how many of these you actually NEED for Modern:

This is by no means EVERY shock land played in Modern, these are just the top 40 or so most common decks appearing on MTGO in daily events. As you can see the number of each shock land you NEED depends heavily on which archetypes you were hoping to play, but if you were to make a master list of shock lands that covered every deck you could want to play it would probably look a little bit like this:

As you can see, approaching your Modern shock lands with a plan rather than just acquiring four of each will save you significant resources that you can direct elsewhere. This list can be shaved even further if you decide that there are some decks that you will just never play.

I know that I’m never going to play Scapeshift, Through the Breach Valakuut, Bogles, or Infect so I can go down to three Steam Vents, Three Stomping Grounds, two copies of Temple Garden, and a single copy of Breeding Pool and trade the rest of them away at my local shop or on Pucatrade. This is going to give me around $65 worth of value that I can direct elsewhere – or nearly one half of a Tarmogoyf.

Fork in the Road

Entering Modern can be a daunting task. You don’t really know where to start and the best path often seems to be to get one of the “cheap decks” to start out with just so you can play. This seems like a great strategy on paper when you’re starting from zero, but how many of us are truly in that position? It’s enticing to throw resources at decks like Affinity, Tron, Elves, or Merfolk but you end up putting all your eggs in one basket as many of these cards don’t translate to other decks. Take a look at an UrzaTron list for example:

All of those cards highlighted in red? Oh, those are the cards that essentially see play in zero other decks in Modern. Tron is an awesome deck to play and there are few things I’ve done in Magic that were more satisfying than turn three Karn Liberated into turn four Ulamog, the Infinite  Gyre into turn five Karn but the deck is highly specialized and if you get sick of it, the cards just aren’t useful in anything else.

Starting in the middle and radiating out from there as you have more resources at your disposal is going to give you the most bangs for your bucks. Do you like casting Lightning Bolt and Serum Visions? Grab  a couple copies of Steam Vents. Fancy yourself a Noble Hierarch man? Temple Garden is the place to start. Did you trade your Standard deck into a playset of Tarmogoyfs? Overgrown Tomb is the probably the land for you.

Knowing your play style is the most important thing, Modern is much more of an open field than Standard so you can play almost anything you want to a fairly reasonable win percentage assuming you learn the deck well. Owning Tarmogoyfs helps, but Young Pyromancer and his elemental friends can often do just as much damage while clogging up the board with a swarm of blockers, so it’s not at all about who has the most money at their disposal.

No matter what current or past Standard decks you’ve enjoyed, there’s a deck in Modern that will match your play style. If you need suggestions for where to start your upgrade path, just post in the comments below and I’ll do my best to advise you on a path forward. But if you only take one thing away from this article it’s this – you only need one Blood Crypt.