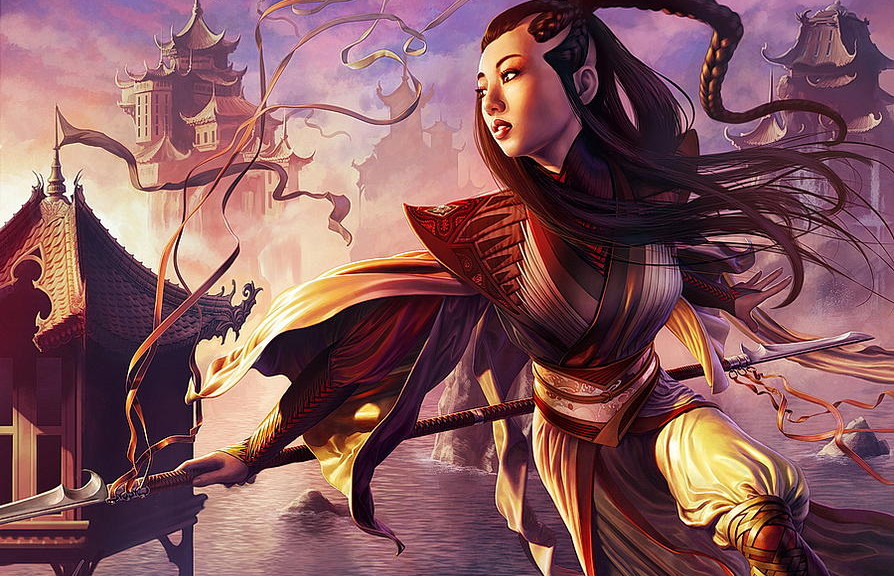 A lot of people get confused because it’s 2 sets in 1 set out and we’re in the last 3 set block.  In April, Khans of Tarkir and Fate Reforged will rotate out but not Dragons of Tarkir and Magic Origins.  Consequently people pondering whether they should get out of KTK and FRF cards will be unpleasantly disappointed. 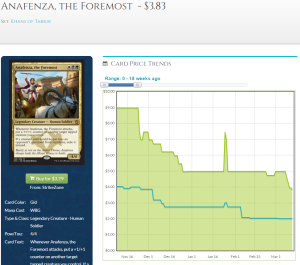 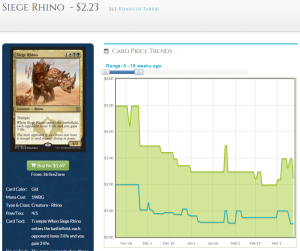 As I’ve echoed many times, Standard legal cards will enter their final plummet right after the Pro Tour approximately 6 months before they rotate.  Most of these cards have already bottomed out and selling them at this point will not be a winning proposition if you plan to buy them back.  This doesn’t probably apply to card like Anafenza, the Foremost and Siege Rhino for most people.  It does apply to the best lands ever printed.  The allied colored fetch lands have a significant price tag attached to them while very close to rotation. 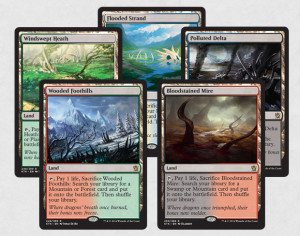 Many players think they can sell them now an pick them up in a few months after prices have dropped.  I’m pretty sure that won’t happen.  The best time to pick them up will  be between now and the end of May.

They’re the best lands ever printed

While they may not have the same price tag as Scalding Tarn or Misty Rainforest, the fetch lands are the best lands that Wizards of the Coast has ever printed in any format.  With only half of them and half of a set of fetchable dual lands, they have created one of the most powerful mana bases in Standard.  It’s really hard to knock cards that get played along Black Lotus in Vintage, right?  What it boils down to is that there will likely never be lands better than this and as players become more enfranchised they will need to own them.

There is not enough time before you need them again

Many players may not play Modern right now due to the extensive Eldrazi threat but they will soon after Khans of Tarkir rotates.  Modern PPTQ season starts July 10th and ends October 6th.  This coincides with the release of Eldritch Moon until the unnamed fall set.  3 months is not a long enough time for those cards to truly see any appreciable price declines.  We saw price increases in the summer months for Modern cards because of the drive to compete in these abundant local events.  If there are any sizable reprints in Eternal Masters (which comes out the month before Eldritch Moon) there could be some panic purchasing of Khans of Tarkir fetches to play in PPTQs the next month.  It’s possible we even see the Khans fetches increase in price if there is an announcement of no enemy colored (Zendikar) fetches in Eternal Masters.

Their Modern play is suppressed

The Eldrazi have brought back pain lands from the dead and quietly pushed most of the fetches to the sidelines.  I have a feeling once Eldrazi are not the best deck in the room we will see a bit more demand for fetches.  Many of those players may already own them but once Modern becomes less Eldrazi dominated we will see a resurgence of decks that play 8 to 12 fetch lands.  That being said, we don’t really have good data for the post Splinter Twin ban Modern.  Currently 9 of the top 10 creatures played are Eldrazi and the only one that isn’t is Spellskite.

The Monastery Swiftspear is one of the most expensive cards in Khans of Tarkir.  Despite being an uncommon, it out performs many of the rares in the set.  If you play it in Standard, you will probably eventually want to play it in Modern or Legacy so I’m going to advise you just hang onto your copies.  Despite having only ever-green keywords, it will be hard to find a place to reprint it in a Standard legal set due to it’s name.  This card will likely see long term gains similar to other lower rarity burn staples (Lava Spike, Rift Bolt, Boros Charm, etc).  It not being a common keeps it out of Pauper but that’s unlikely to affect it too much.  I think this is going to be a solid $5-8 card in 3-4 years.

Ugin, the Spirit Dragon is played in Modern, EDH, and casual circles everywhere.  A one-time printing (the supply is so low on the promo it doesn’t really make a dent), Ugin is poised to have tremendous long term growth.  He is a lot like Nicol Bolas, Planeswalker in casual appeal but his completely colorless casting cost makes him easy to play in any deck.  You can find him for $28 on TCGplayer and he still has a buylist of $20 so at this point I’m not sure it’s worth selling.  His historic low was $25 during June of 2015 when he saw almost no competitive play.  At this point I’m fine hanging onto them for a few years for him to climb back up.  If you’re on the fence, I wouldn’t sell foils or promos unless you needed the money as those have barely budged as the non-foil climbed.  The Commander demand for this card drives those prices.

Monastery Mentor, like Monastery Swiftspear has a name that makes it a little harder to reprint.  The fact that Prowess is a tertiary keyword (source) in white means it will have less opportunity to be reprinted.  This card shows up in Legacy and Vintage decks so I feel like it would have already made the jump into Modern if it was a good fit.  At $15 I don’t feel like there is a particularly compelling reason to keep them if you don’t already play them.  There is definitely an issue with the prevalence of creature removal in Modern that could keep this 2/2 out of the spotlight for a long time.

Tasigur, the Golden Fang I think is in a slightly different realm than Siege Rhino.  His body is a similar size but you can often play him on the cheap with only 1 color.  While his legendary status has relegated him to a 1/2 of in most decks, I think he will be a great long term hold because he is a story character with a problematic keyword to reprint.  He also technically has a 3 color commander identity making him harder to print in Commander supplementary products. Tasigur has fallen a bit since he was printed in an event deck.  I think this is his price floor for the foreseeable future.  I also think foils are the better play if you’re picking him up to hold long term.

Everything else I’m going to lump into a “probably unplayable in Modern” so you’re probably fine just selling them.  Granted, while the best time was 6 months ago, it’s better late than never.  I think this is an important time for players to suck it up and take their pennies on the dollar for cards they won’t play.  Otherwise you end up like me with a pile of Sylvan Caryatids and Courser of Kruphix and wonder where it all went wrong.

10 thoughts on “Grinder Finance – Preparing for the Rotation Part 2”