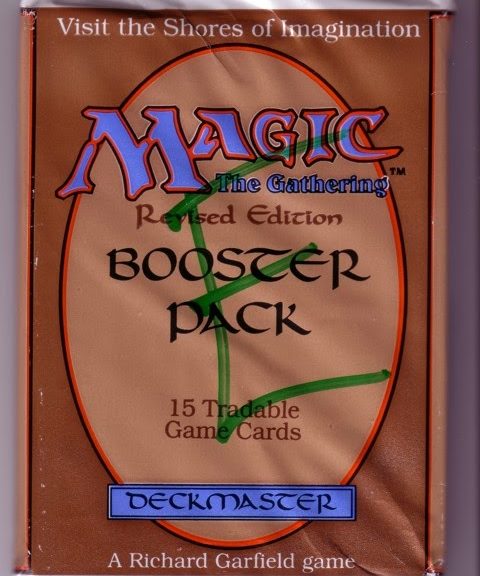 Magic cards comes in different rarities. There are commons, uncommons, rares, and mythic rares. So what comes after mythic rare? What could be more rare than that? Today, I will be going over some of the rarest, and subsequently most expensive, Magic the Gathering cards to ever exist. Some of these were created to be unique or rare from the onset, and others have incredibly small supplies left in the world. Others were created by accident altogether. Let’s check them out. 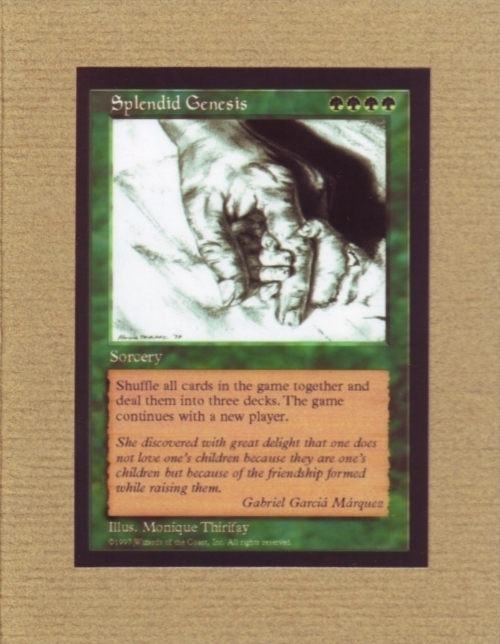 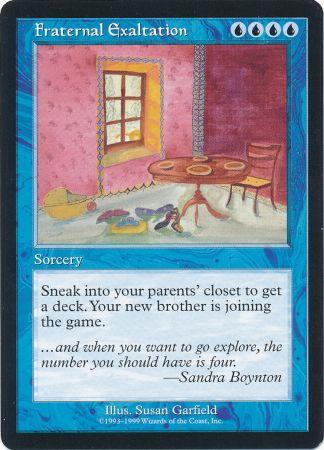 These two cards are known as Richard Garfield event cards, and are some of the rarest cards in the game. They are not tournament legal, for obvious reasons, and were never released in an official set. Richard Garfield, the creator of Magic the Gathering, gave these our to family, friends, and Wizards of the Coast employees to celebrate the birth of his first two children. There is estimate to be no more than 100-200 of these in existence, and because of that, they go for around $7,000-$10,000 each. 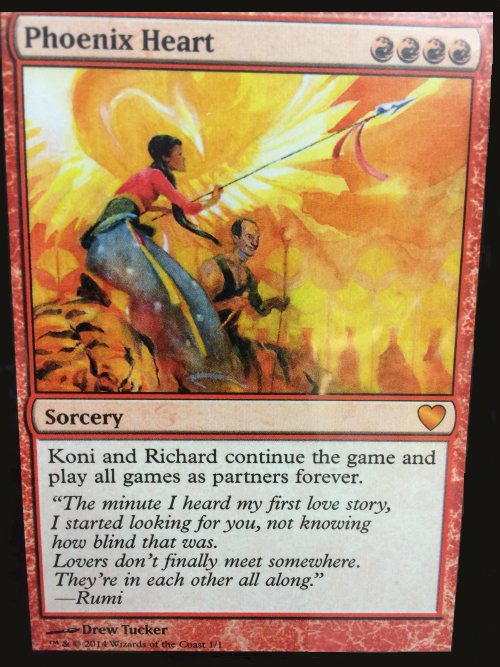 Richard Garfield commissioned the old school Magic artist Drew Tucker to create this one-of-a-kind card for his new fiance. Created in 2014, there is only one copy of this card in the world. 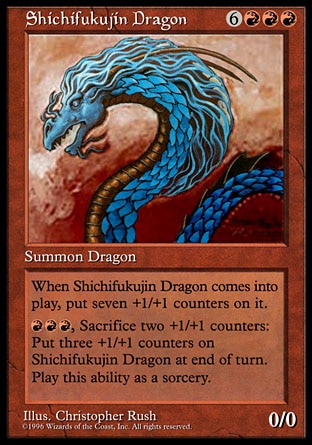 Try and say that five times fast. Shichifukujin Dragon was created in 2003 to celebrate the opening of the DCI Tournament Center in Japan. There is only one copy of this card in existence, and as a result, nobody will reasonably own one. The name is derived from Japanese mythology and relates to the Seven Deities of Good Fortune. Like the good fortune of the store that owns this beauty.

On the topic of one-of-a-kind cards, there is 1996 World Champion. Well, I’m sure you can guess what this was given out for. There is only one copy of this card in existence so good luck! In 2001, it was sold to a private collector for $17,500. By today’s standards, that was a steal. This and the Dragon above are both in the Guinness Book of World Records for rarest trading cards. 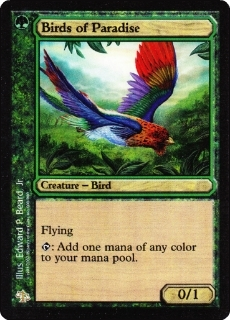 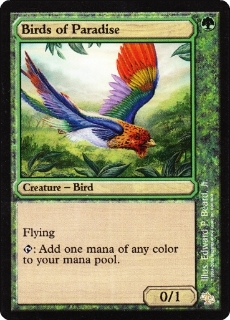 These are test prints. There are dozens of different cards, each with different variations, foil and non-foil. Test prints range from a few hundred dollars to over $1000. There are many types of test prints over the years, mostly done by Wizards to figure which foiling process and borders looked aesthetically pleasing. How they ended on today’s post-8th Edition foiling, I don’t know, but can we just go back to 7th Edition foiling? 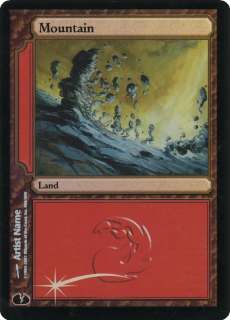 Sadly, these test prints aren’t tournament legal, but cmon, you know you want to play with this Parallax Tide/Mountain hybrid. I know I do! 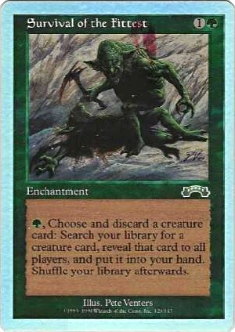 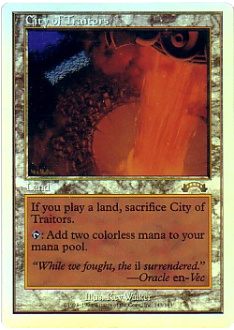 Did you know Exodus came in foil? Well… tricky question. It didn’t! These are test prints of cards getting the foil treatment before foil cards were ever released. Because of the limited supply and high playability of these cards, foil test print City of Traitors and Survival of the Fittest fetch thousands of dollars each. Talk about a nice way to upgrade a deck or cube. 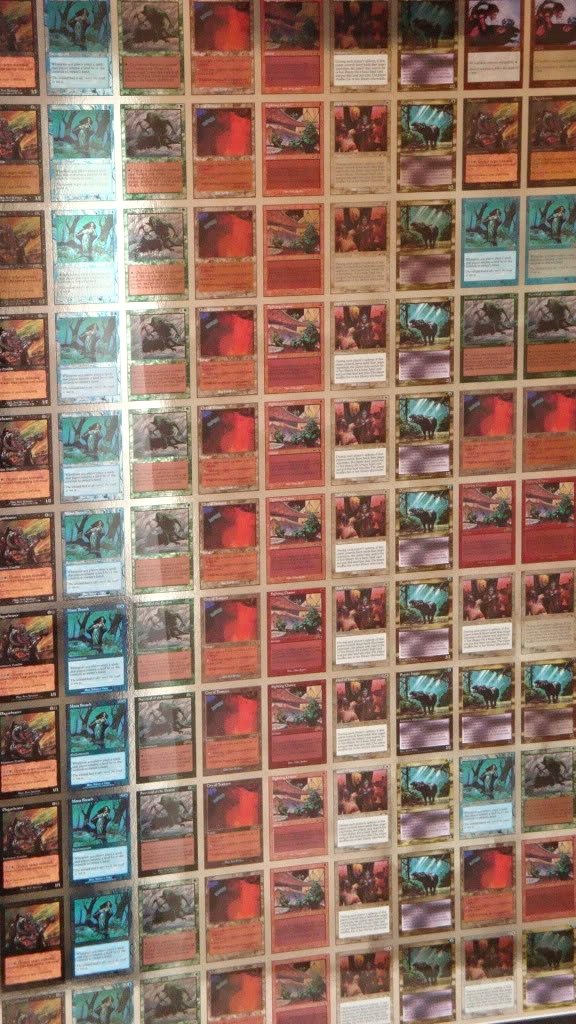 Do I know what this uncut sheet of test prints would go for? No, and I am not even going to try and guess. 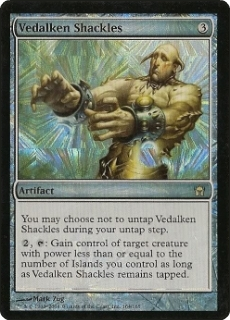 At first glance, this may just look like an ordinary foil Vedalken Shackles. But once you look closely, you will see it’s anything but normal. This is a Fifth Dawn test print, and it is extremely rare. There are also other rares from Fifth Dawn like this, Engineered Explosives, Rude Awakening, Staff of Domination, and Hoverguard Sweepers. I could see these easily being worth over $5,000 each. 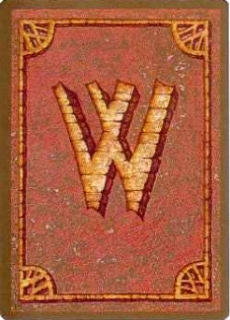 Way back in 1994, there was another game being created called Wyvern. It was manufactured by the same company that did Magic, Carta Mundi. Well, there was a printing error, and as a result there were some commons from Fallen Empires were released with this Wyvern back. The cards look normal from the front, but have this back. Depending on the card, they can range from a few hundred to $1000, but most of Fallen Empires was a bunch of awful cards. Most players just look to try and complete a set (121) cards, but even that could take a lifetime of collecting. 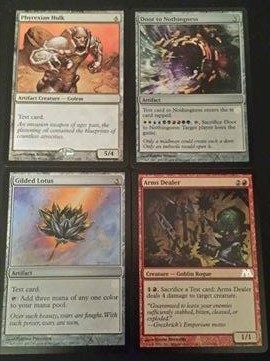 Check out these sweet test cards from M15. I would killll for that Gilded Lotus. I love how when you breeze past them at a glace, they look like normal cards, but nothing like showing your opponent your Door to Nothingness and it saying “Test card to Nothingness enters the card tapped.” 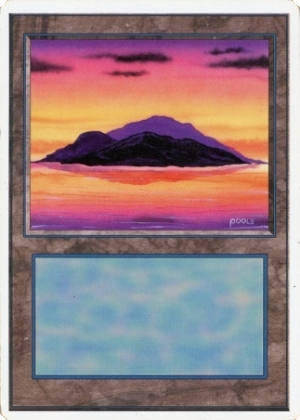 I will talk about Summer cards shortly, but here is a textless Summer Island test print. I have no idea the value of something like this, but when any of us pick something as rare as this up, we can worry about price then. Deal? 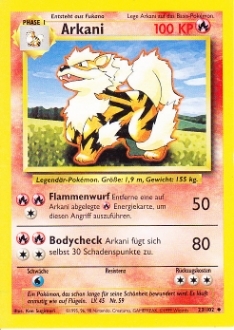 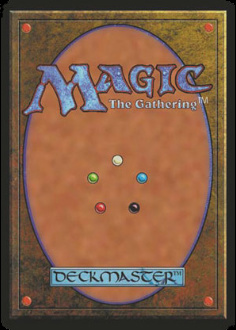 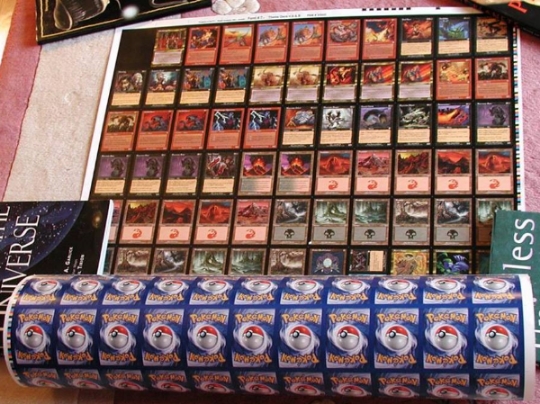 Which would you prefer, Pokemon backed Magic cards, or Magic backed Pokemon cards? How about this, if you come across any you just give them to me? I like the sound of that. 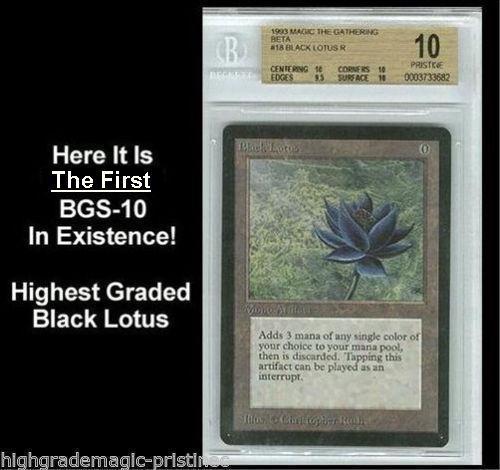 Straight from eBay, here is a BGS graded 10 Beta Black Lotus. There are certainly way fewer of this card, in this condition than even the Richard Garfield event cards or Exodus test prints. And this came from a booster pack!

So what’s the asking price? Just a smooth $125,000. Got that lying around? Well, if you come up a little short, you can always make an offer on it. Here is the link if you are curious. 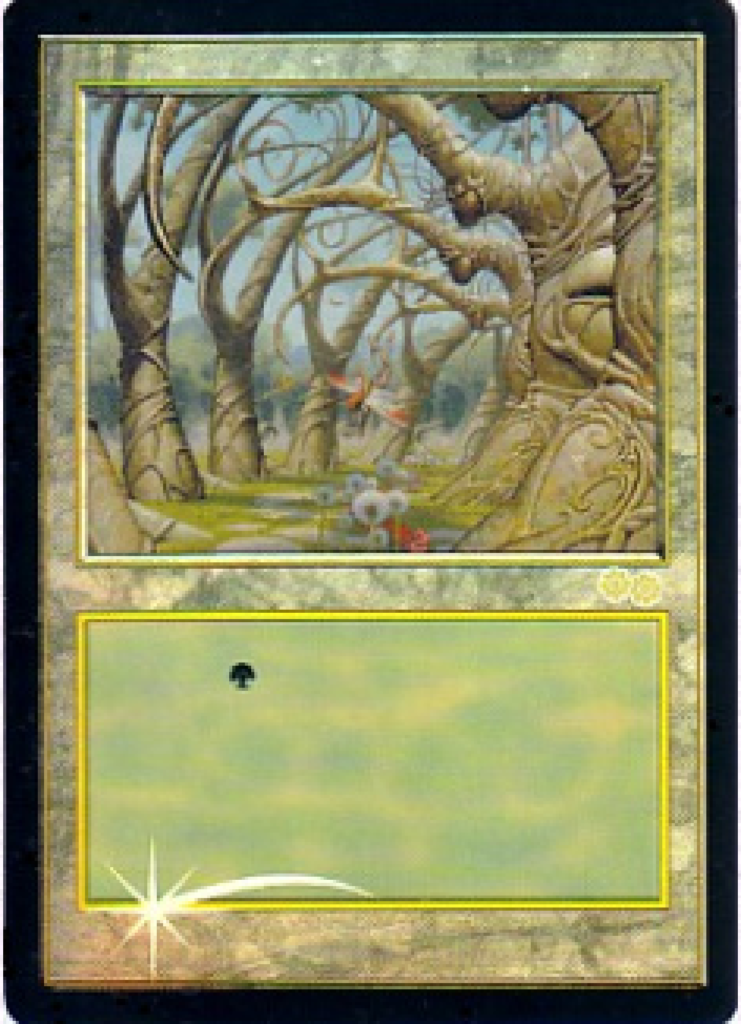 Well, I’ve died and gone to heaven. This textless foil Gaea’s Cradle came from an uncut sheet where all the cards had no text. You can also find other cards like this, including the tournament staple Duress. But, yeah, I want this more than any other promo in the world, just because I absolutely LOVE Gaea’s Cradle in so many formats, and this is just beautiful to look at. I would price this in the ballpark of $5,000. 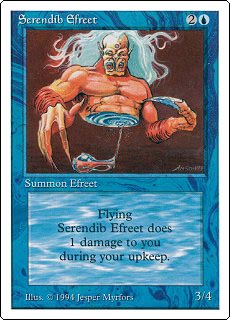 Lastly, I want to talk about Summer Magic. I will reference MTG Librarities here to best describe this set for those who don’t know.

“When the Revised Edition was in production in 1994, a number of problems with the set became apparent. The colors were washed out, the picture for Serendib Efreet was wrong, and there was a growing concern with the Satanic images on some of the cards. The solution was to print a fixed version of the Revised Edition, code named “Edgar”, which has since come to be known as Summer Magic because it was printed in the summer of 1994. The cards were distributed in regular Revised Edition boosters… Hurricane was printed as a blue card and thereby became the most famous and most desired Summer Magic card of all… The artist name for Plateau was not corrected as well. Because of all these flaws, the entire print run was recalled and destroyed… However, a few booster boxes survived. About four cases (40 display boxes) accidentally made it to circulation… Estimation of the Summer population is at least, 130 to 150 Commons, 40 to 60 Uncommons, 30 to 50 Rares, 400 to 500 Lands… Summer Magic cards can best be recognized by their 1994 copyright date.” (Found on www.magiclibrarities.net)

Well that is a lot to take in, but just know that the cards from the Summer edition are extremely rare and sought after. Many people think that at some point they may have run into a Summer card just because it looks so similar to a Revised/Unlimited card to someone not specifically looking for it. However, due to the rarity of these cards, I wouldn’t worry much, chances are you didn’t run into one. Although, I will admit that the thought always lingers in the back of my mind. 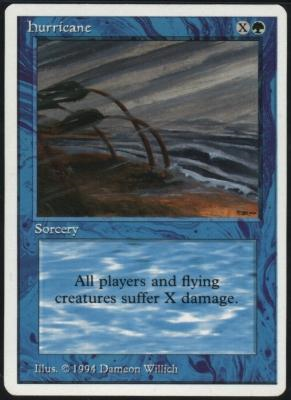 The most famous and sought after Summer card is Hurricane. Also known as the “Blue Hurricane” due to its incorrect printing color. Personally, I think it’s cool, but I would much rather own a few Summer dual lands or a stack of basics as opposed to this. Beggars can’t be choosers, though, and I would absolutely not complain if this rained down onto my lap one day.

I hope you enjoyed taking a look at some of the rarest Magic cards ever printed. There is an incredibly small chance that anyone reading this, myself included, will acquire these one day, but it is still quite easy to appreciate the history. Magic has been around for 25 years strong, and there may be new rarities down the line that will drop our jaws just like these amazing cards from years gone. What are your favorite Magic rarities? Do you own any of them? Let me know in the comments, and thanks for reading!

3 thoughts on “Mirror, Mirror on the Wall, Who’s the Rarest of them All”