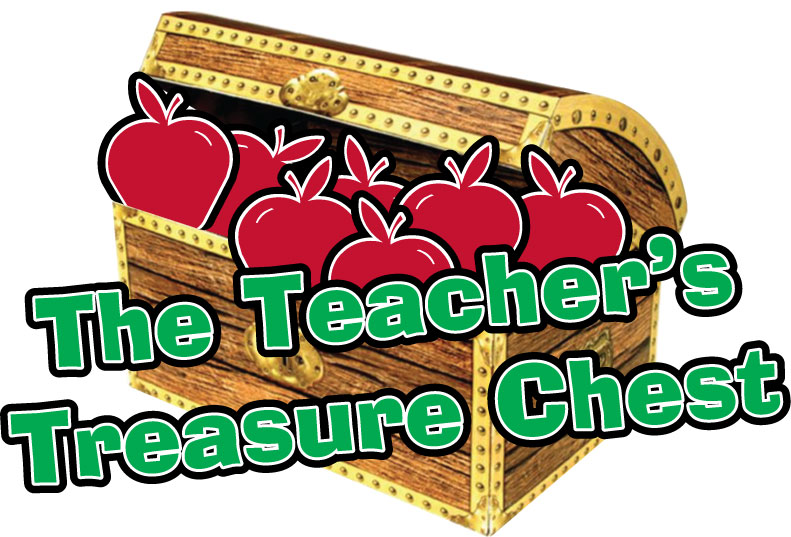 Nothing has really struck me this week as a topic I want to devote an entire article to, but I’ve got a few small ideas floating around and some short-form questions on Twitter to answer. So today is the first in what will likely be an infrequently recurring series that are a collection of mostly-disparate topics.

As was expected, TNN put up solid results at Grand Prix DC this weekend. He was all over the winning grinder lists and X-0 day one records, with 9 copies in the Top 8 and 3 in Owen’s winning list. Not surprisingly, his price has now reached a comfortable $40. Remember last week when he was ~$33 and I told you not to sell until after DC? Hey, well look at that!

He’s absolutely the real deal, so don’t expect him to fade away anytime soon. Demand from Legacy players will persist, and he’s a three-of or four-of type of card, which helps significantly. I doubt he gets below $30 anytime before a second printing, and I would guess $35 is a soft floor. Copies are still flowing from people that snatched up cheap decks at Target which will keep him from inflating too much in the coming weeks, but after a few months there will be a far less liquid supply. At that point, his price will begin to rise more reliably once everyone that wanted to sell theirs has. If you want to profit, feel free to sell, as his price may slip a bit in the short term. Don’t feel bad about holding on though, especially if you may actually play with him, as I don’t believe we’ve reached his ceiling yet. A limited-run card that’s a four-of in Legacy with tremendous casual appeal (protection from players is a really nifty ability) is a conflux of valuable factors.

The MTGO partial shutdown will have far reaching ramifications that will take months to unfold and see the full implications of. I will try my best to make a guess at what the immediate impact will be though. 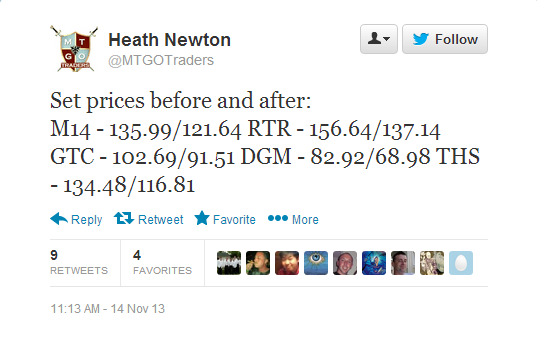 That tweet is showing the prices to complete a full set (1x) on MTGO before and after the announcement. At this point, there has been a 10-20% drop in prices on Theros and RTR block cards. Players apparently don’t expect premier constructed events to be returning in a week or two, which is why prices are taking such a hit. If the expectation was that events will only be gone for a few weeks, then prices wouldn’t have seen much of an impact. But with the announcement about how long of a downtime to expect not being promised until sometime before the end of the year, it’s safe to assume that this is a several month – or, Worth forbid, a several year – project.

With a significant drop in value of cards online, as well as the upcoming Standard PTQ season in meatspace, we may see an above-average amount of redemptions occurring. This means a greater number of Standard cards becoming available in paper, suppressing card values in the real world by some amount. I would especially expect a greater supply of RTR block cards relative to Theros, as Theros will remain relevant beyond the summer, while RTR mostly will not. It’s also worth noting that apparently cards for Modern, Legacy, etc have not dropped much/at all in value, meaning players don’t expect this to be the death of MTGO, but rather a medium-term disruption in service. They may not know what Standard format we’ll be in when dailies return, but they know Modern ones won’t have changed much.

As per how much redemption will occur, we really don’t know, and Wizards won’t be in a rush to tell us either. I don’t expect it to have a severe effect. A (very, very) rough guesstimate is that the extra redemptions may account for a percentage point or two of additional product in the real world, but I wouldn’t fault a knowledgeable party for expecting the impact to be ten times that. It’s just very difficult to get a bead on it.

An interesting side effect of all of this is that RTR block cards may hold their value quite well on MTGO going long. If a large percentage of RTR cards get taken out of MTGO during this period, in two years there will be a lot less digital Supreme Verdicts, Abrupt Decays, and Deathrite Shamans running around.

When FTV:20 was announced, preorders were in the ~$150-250 range. That was typical for a new FTV. Hype was high, as this FTV had five extra cards compared to previous years, as well as an air of excitement surrounding it, as players were eager to see what the 20th anniversary of Magic would bring. We hadn’t seen much marking this year as a celebration, so players were hoping FTV:20 would be something special.

I don’t recall at which event Jace was spoiled, but I seem to remember he was among the first three cards. Imagine the excitement at the time – three cards into twenty, and Jace is in there?! Preorders skyrocketed to $450. Who cares what else is in the other 17 cards? They can’t all be bad, and Jace! Don’t you understand? JACE! JAAAAACE! JAAAAAASGghghhhhhhh

Then the other 17 cards trickled in, and whoops, turns out they’re all boring. Which other cards were people supposed to get excited about? Kessig Wolf Run, a $2 land that was just in Standard? Or perhaps Char, which approximately zero people have cast in 2013? The third printing of Cruel Ultimatum not doing it for you? Well, check out Dark Ritual! Sure, it’s had roughly 80 printings, was foil twice, and this is terrible art, but DARK RITUAL! Guys? Where are you all going?

FTV:20 preorders hit $450 on a swirling mixture of hype, expectations, and the thrill of the unknown. Once the veil was parted, all of that dissipated and we were left with Jace and 19 other cards that were mostly entirely unexciting. By the time FTV:20 finally hit shelves, it was maybe $150. Today, sealed copies can be had for ~$125 on eBay, and Jace:20 is about $90, $10 less than WWK Jace.

What’s going to happen with Jace in the long term? Well, probably not a lot. His peak came and went this past summer. The amount of play he is seeing hasn’t increased at all, he’s absolutely not getting unbanned in Modern, and a slew of new copies were added to the market for anyone that really wanted them. Pack foils will stay absurd as a collector’s item, but that’s about it.

What Standard playsets should I pick up now?

I can’t tell you every Standard card you should own today, but I can give you a few pointers. 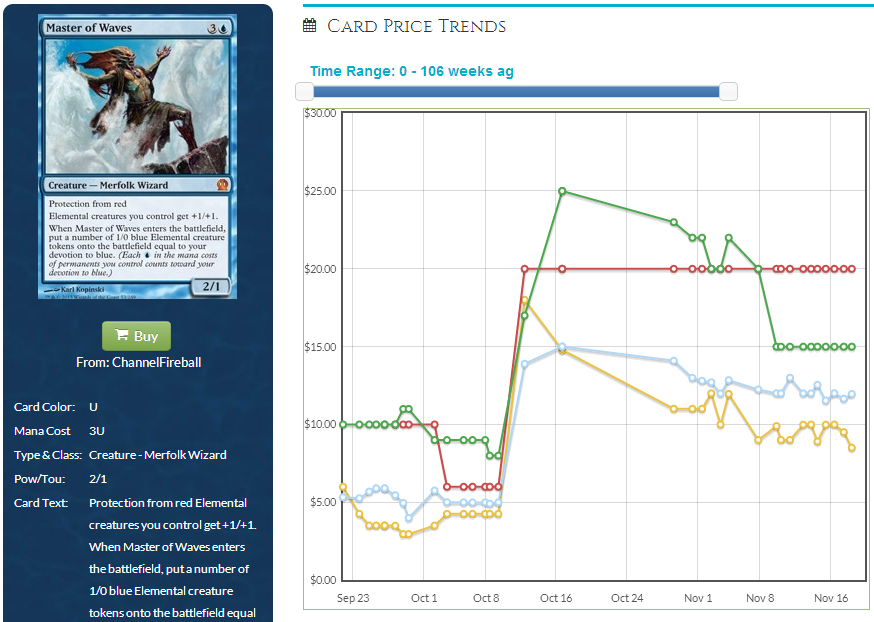 Our new Merfolk overlord has proven he’s here to stay. Variants of blue devotion continue to put up strong results week after week in Standard, he’s revitalized merfolk in Modern, and I’ve even seen him pop up in Legacy. Despite all of this, he’s snuck down to ~$12, and I spy a few retail copies for under $10. I would not hesitate to trade for this guy, and don’t be afraid to pick up more than just a playset. His floor can’t be much lower than $7 or $8, and his ceiling is in the ballpark of $20-$25.

Immediately after release Chandra burned all the heretics at the stake, but since then has been relatively quiet. Devotion decks and various forms of control have taken the spotlight, leaving Chandra without much to do. She’s now around $20-25, nearly half of what she once was.

I’m optimistic about Chandra’s future. Keep in mind that she’s got two red symbols in her mana cost, which is good for Nykthos fans. That middle ability also plays well with Nykthos, as generating big mana is a lot easier than it used to be. We certainly haven’t seen the last of her.

Pick up a playset, but don’t go much deeper than that. While $20 is close to her floor, breaking $30 again will be very tough. She’s also as close to a guaranteed reprint in M15 as a card could be at this stage (along with Garruk), so you don’t want to end up too deep when the inevitable price drop comes. Pick up your four ahead of PTQ season, but remember that any you keep past March will become a liability.

Have you figured out this land is legit as hell yet? Because it is. It is legit as hell. Wizards has been telling us for years that they want us to play on the board, not on the stack, and Nykthos pays you hard for doing such. There are plenty of adorable combos floating around out there that haven’t broken into the mainstream yet either, meaning there is a lot of untapped (heh) potential in the card. Just this week MTGO personality Bing Luke (@prolepsis9) linked an event with Nykthos in Modern doing dirty business with Genesis Wave, which I can absolutely get behind. MTGPrice is showing the card around $10, and there are a few purchasable copies out there for under $9. Any that you can pick up in trade under $10 should be golden. Nykthos feels like a $15-$20 card to me.