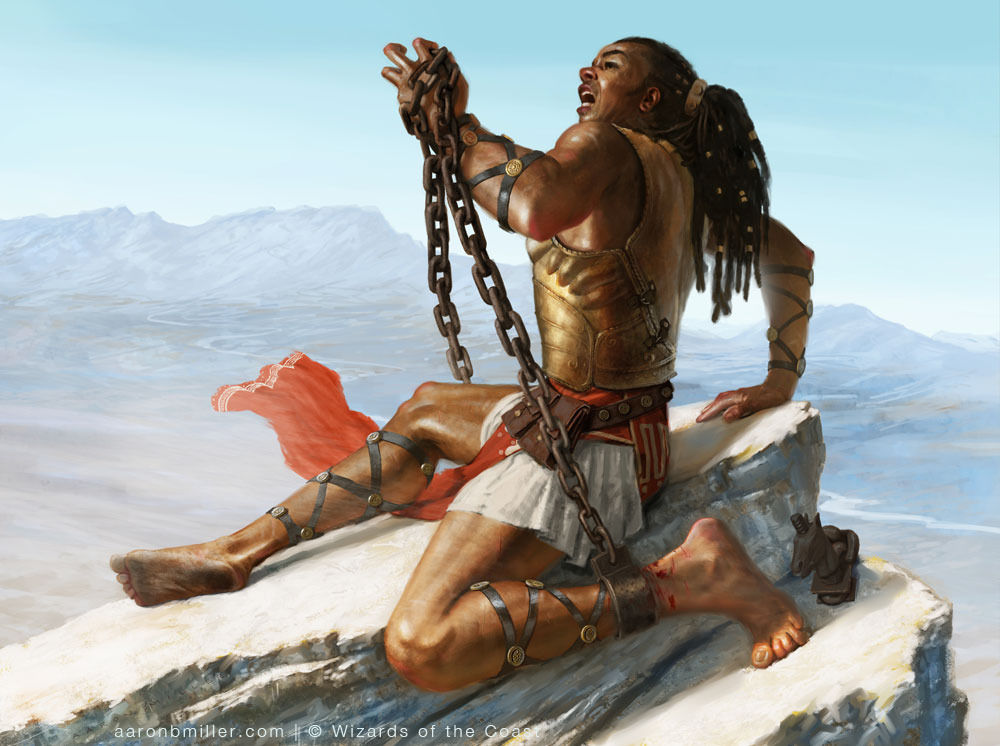 This past weekend was Grand Prix DFW, and the entire experience was marred by an Ice Storm. Roads were covered in sheets of ice, three hour drives dragged into the tenth and eleventh hour, and Twitter told the story of pro after pro giving up and going home after their umpteenth cancelled flight. It resulted in an abnormally small GP, warping the field to be considerably soft, as many professionals were unable to attend.

The top eight had the word “Mono” in it a bit less than previous GPs, but we still saw devotion to black make an appearance, as well as a nearly-mono red devotion list. The winner was Marlon Gutierrez’s Orzhov control deck, which looked a lot like Esper just without blue and a ton more removal and discard. He was packing the full set of Blood Barons in the main deck, hoping to capitalize on his resistance to much of the popular removal and significant lifegain capabilities.

Blood Baron was $7 at one point before everyone collectively realized what the card said and he was $20 almost overnight. He’s now down towards the $18 range, and hasn’t see any real bump from GPDFW. I think it’s possible we’ll see him tick up a little bit in the near future, but I would be surprised if he climbed above $22 or $23. He should crater pretty hard by the time rotation rolls around, at which point you should be willing to snag plenty of copies, as casual demand will keep him up for years to come.

Desecration Demon and Pack Rat made their usual appearances in both the winning list as well as the black devotion list, and continue to hold strong at $10 and $3 respectively. Don’t be afraid to ask for real cards in trade with Pack Rat these days. He’s in everything, and if people want to use it, they should expect to trade away relevant cardboard.

Hero’s Downfall was popular again, but like Blood Baron, didn’t see any real movement based on the results of the event. The next North American Standard GP is in late January, which is where many role-players like Downfall will see a rise in price if it’s going to happen this season. Trade for them now at $10, and don’t be in a rush to ship them.

Mutavault was everywhere again; no surprise there. Get used to it, as it’s going to be in 50% of top eight manabases until September. It’s now easily $25, a few dollar increase from the last time I mentioned it a few weeks ago. The ceiling is probably around $30, which I’m guessing we’ll brush our heads against during January or February. If it wasn’t rotating this fall I’d peg it to go even higher. At this point, that’s all that will keep it from being a $40 rare.

While there wasn’t anything I would really call a breakout performance, UW certainly made an impressive showing after being rather quiet lately. Sphinx’s Revelation, Supreme Verdict, and Detention Sphere were out in force, with a healthy amount of Jace and Elspeth rounding out the package. Jace has rebounded to $20 after slipping as low as $14 after the JvV announcement, at which point people noticed the release date said “May” and stopped the firesale. Like Blood Baron, I can see him ticking up a few more dollars, but I don’t think we’ll see him crest $25, especially with a very clear date of auxiliary supply on the horizon. Elspeth has lost a ton of value lately, falling to $20-$22. To her credit, It took awhile for her to get there from her prerelease days of $35. I would guess we’ll see her continue to decline through the summer, and late next fall we’ll see a resurgence.

Sphinx’s Revelation should behave similar to Jace and Blood Baron at this point; that party has mostly come and gone. Keep in mind that it will probably drop of the face of the earth come September, as it’s not good enough for any other formats, and is hardly a “cool” card. Don’t get stuck holding the bag. Meanwhile Detention Sphere is also still seeing a lot of action, and I’m hoping its price reflects that in the near future, mostly because I bought 30 or 40 of them before they announced the event deck. I hate event decks.

Supreme Verdict seems low to me right now, especially given how much devotion decks play on the battlefield. By the way, did you happen to notice that MTGSalvation put the three Scrylands from Born of the Gods in their spoiler? It includes the UW land and the GW land. That bodes very well for Verdict, and Bant in general. On top of that, Verdict will continue to remain relevant in nearly every format even after rotation, so this is a strong pickup $4-$5. Even if it doesn’t hit $10 during this season, a number which seems entirely plausible, the floor shouldn’t be much lower than $3 or $4. 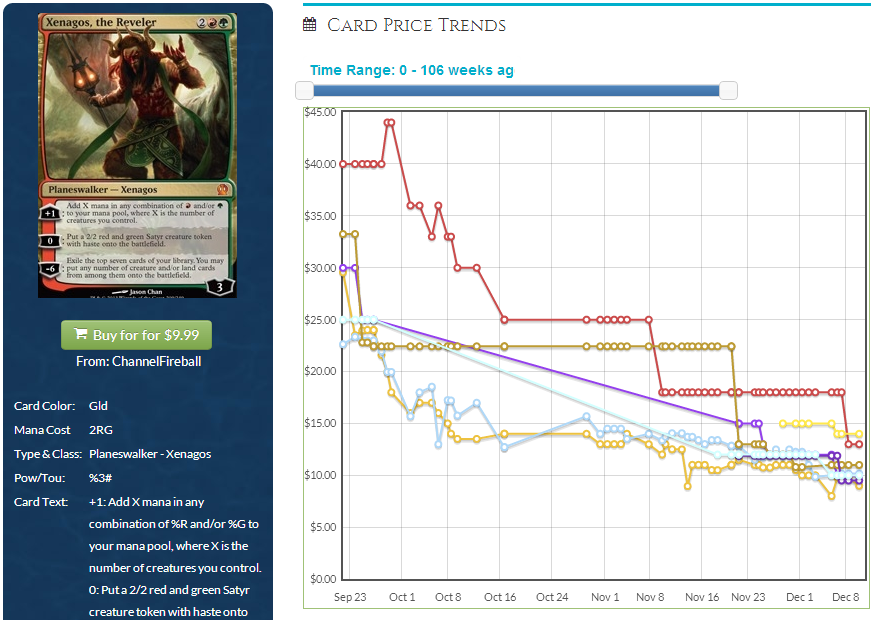 Lately while keeping abreast of cards I’ve seen a lot of powerful effects that are considerably lower than I realized, and I want to put some of them on everyone’s radar. First of all, have you noticed that Xenagos can be had for as little as $8 on TCG? That is very low for a Planeswalker that just put two copies into a top eight that was very soft to a pile of satyrs. I’m not saying he’s going to pull a Domri, but there is no way he stays this low forever.

Continuing in the trend of underpriced Planeswalkers, Ashiok too is quite affordable, with plenty of copies under $9. He’s already proven his chops, so we know he’s at least capable. Given how popular both mill and Planeswalkers are with casual folk, there’s no way he doesn’t rebound at some point. Grab your copies and hang on. And if you’ve got a little extra cash this time of year, might I suggest some Korean copies? Visions of Meloku.

I see two copies of Chained to the Rocks available for $.44 cents each right now, with quite a few under a $1. That’s awfully cheap for a very powerful removal spell; just barely above bulk. Mizzium Mortars is a $3 card. Is Chained that much worse? It’s hard to say without knowing what the lands will be next fall, but I would be awfully surprised if those wrought iron chains don’t end up costing more than pocket change at some point.

Speaking of rocks, Purphoros is down in the $7-8 range. Ok, I wasn’t really speaking of rocks, but whatever. Overall he was the most expensive god during the prerelease season because of an obviously very powerful triggered ability. We haven’t seen much come of it yet, but there’s a whole lot of time for him to matter yet. Keep in mind too that not only could he become a legitimate force in Standard, that ETB trigger is ripe for bashing people with in more combo-oriented formats. How about a Genesis Wave deck? Or some sort of elf brew? I don’t claim to know the best way to go about it, but it’s possible we end up seeing him in decks that never plan on turning him on in the first place.

Speaking of gods (hey that time it worked), Anger of the Gods is easily purchasable under $2 these days. I wouldn’t be rushing out to purchase them at the moment, but this is a legitimate sweeper with a powerful clause. Firespout has seen a lot of play in Modern, and Anger may manage the same. That exile clause may be mostly irrelevant in Standard unless its sweeping away weird leaf-deer things, but it matters quite a bit in older formats where Deathrite Shaman, Tarmogoyf, and Scavenging Ooze are mainstays.