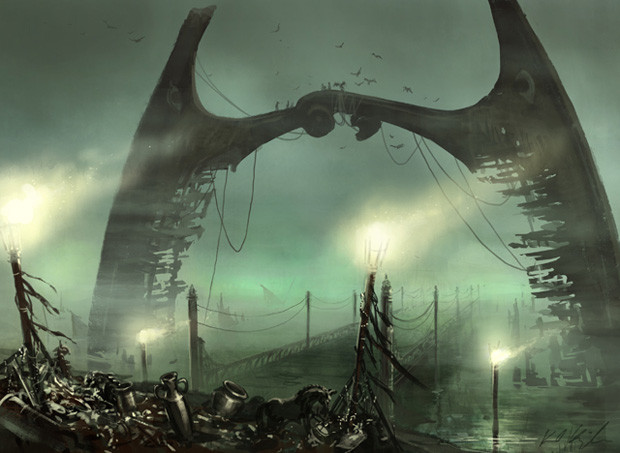 The reveal of the Scrylands in Theros have been responsible for more belly-aching and nonsensical complaints (“these cards have no value! Putting them at rare is a cash grab!”) than any other Magic card in recent memory. The existence of the gates at common in Ravnica block hasn’t helped by providing a strong contrast to what some perceive as a marginally better land. My goal today is to develop an accurate concept of their power, use that concept to prove that a bunch of people are stupid, and then finally discuss common trajectories of rare land cycles in Fall sets.

Consider a Scryland relative to Serum Visions. Serum Visions is frequently played in Modern now that one of the best cantrips ever, Preordain, is banned. It’s completely playable and would unquestionably be a significant portion of the standard metagame were it reprinted in Theros (which there’s still time for.)

Let’s start with scenario A, where you keep a 7 card hand with 2 lands and Serum Visions. You put a Hallowed Fountain into play and tap it to cast Serum Visions. You immediately draw a card, and then scry 2. You end up with 6 cards in hand, 1 land in play tapped, 18 life, and fixed the top 2 of your library.

In scenario B, you have a 7 card hand where 1 of those lands is the UW Scryland. You put it into play tapped, and scry 1. You keep the card or you ship it to the bottom. You end up with 6 cards in hand, 1 land in play tapped, and you fixed the top card of your library.

In scenario A, Serum Visions is similar to Gitaxian Probe in a way – you’re going to replace it with the top card of your deck, but you don’t actually know what that card is. Is it removal? A threat? More mana? We don’t have that knowledge yet. So more accurately, you have 6 cards that are known, and a 7th that is a mystery card. This is in contrast to scenario B, in which you have complete knowledge of what your 7 available cards are. This has a not-insignificant impact on your ability to make mulligan decisions. For example, what about an opening 7 card hand with 3 Serum Visions? You really only know 4 cards at that point.

In scenario B, you know exactly what your hand looks like. If you have 4 Scrylands, you know for sure you’re hitting your first 4 land drops. Along the way, you’re going to be monitoring your top card in an attempt to not draw something you don’t want.

Returning to our original scenarios, which fares better, the Serum or the Scryland? There’s definitely value in scrying an extra card deeper, especially so for a combo deck that just wants to get as deep as possible for particular pieces. However, the more accurate information of the Scryland certainly has value. There are plenty of 1-land Serum Visions hands people have kept and promptly lost because they expected it to do too much work.

Overall, I’d say that in your opening hand, a Serum Visions is reasonably better than a Scryland if piloting a combo deck. In a control deck, the margin between them is considerably thinner.

How about late in the game? Say it is turn 9+, and both you and your opponent are now topdecking.

In scenario X, you draw your Serum Visions. You pay 1 mana to immediately draw the next card, and you then scry 2, hoping to move lands and irrelevant spells to the bottom of your library. You effectively drew 1 card (the Serum doesn’t really count, since you immediately replace it,) tapped 1 mana, and you scryed 2.

In scenario Y, you draw a Scryland. You put the land into play tapped, and either keep or ship the top card of your library. You end up with 1 additional mana which is tapped, and you scryed 1.

Scenario X sounds a lot better, but wait a moment. What if the card you drew off the Serum Visions was a land? You put it into play, and now you’re in a very similar situation to the Scryland play – 1 tapped land, an additional one in play, and now new cards in hand. You did scry one extra card deeper, though. This is objectively better, but that doesn’t mean it is better in every situation.

Imagine your opponent has no threats on board and your scry sees a land on top and the new Murderbore second from the top. You ship both because you don’t need either; at this point you want a threat. Then your opponent rips a creature, and you find yourself wishing you still had that Murderbore. If you had only scryed 1, you would have shipped the land, and then drew the Murderbore at exactly the right time. This isn’t to say that scrying for 1 is better than 2, but simply that occasionally you will burn yourself by having to make decisions about the game state several turns down the road with very imperfect information.

So far, it sounds like Serum Visions is basically better than the Scryland in both the early game and the late game. However, that isn’t taking into account a very important factor – the Scrylands don’t cost you a card. When you put 4 Serum Visions into your deck, you’re down to 56 cards left. The Scrylands, however, are slotted in as lands.

If history has taught us anything, it’s that lands with added value are incredibly potent. What other lands have functioned as spells? Kessig Wolf Run, Moorland Haunt, and the rest of their Innistrad Ilk have this feature. The manlands from Worldwake, which saw heavy Standard play and continue to see moderate Modern play, are also lands that grant additional value. Most recently, Mutavalt in M14 fills this role. Historically, most lands that have any sort of additional spell function make a good run in Standard.

While Serum Visions is often better than a Scryland, it is a spell and a spell alone. It provides velocity and mild card selection, but costs you information in your opening hand, card slots, and mana. In contrast, the Scrylands are about 1/4th to 3/4th as good as a Serum Visions depending on the situation, but are stapled onto lands so their effect is essentially free. Take a gander at Eyes of the Watcher, which gives us a foundation that scry 2 is worth roughly 1 mana. From this, it is fair to say scry 1 is worth roughly half a mana. The cost to playing these lands is the tempo loss of being forced to play it tapped, which all but the most dedicated aggro decks can often afford. This means that every time you put a Scryland into play, you’re getting roughly half a mana’s worth of value for roughly free. How many other lands can claim this?

There are a lot of nuances to understanding exactly how good the Scrylands will be in various decks and various situations, and Pat Chapin will probably provide better insight than I, but I hope this general discussion will illustrate that the Scrylands are considerably stronger than many out there would have you believe.

Now that we’ve established that they’re not just a “blatant cash grab” we want to consider their financial trajectory. What can we expect out of them early on, and what does their price life look like a year from now?

There are a lot of examples to look back on to answer these questions, the most recent just a quick hop back in time to Innistrad, and before that, Scars of Mirrodin. Both the Innistrad Enemy Checklands and the Scars of Mirrodin Fastlands had considerably similar price histories. During prerelease, they preorder for somewhere between $4 and $10.

As the set becomes drafted and copies begin flooding into the market, prices start dropping. They see some amount of play, but because they’re available in such quantity, and the previous set land prices have risen, they remain suppressed in value. Isolated Chapel and friends were all well under $4, some even dipping below $2 at times. The SOM Fastlands did the exact same thing; I clearly recall seeing Seachrome Coasts being under $2 at one point.

The lands hit their floor typically in early spring. As we approach Summer, players begin to dump their rotating lands from the prior set, and the Magic market as a whole collectively realizes that the only lands they’ll have available to them in September will be the [Fastlands/Checkands/Scrylands.] Prices begin to tick up slowly over the summer, and once fall hits, the lands take turns spiking hard as decks of the appropriate colors show up with a full playset. Isolated Chapel was nearly $20 at one point, as were Seachrome Coast and Darkslick Shores. 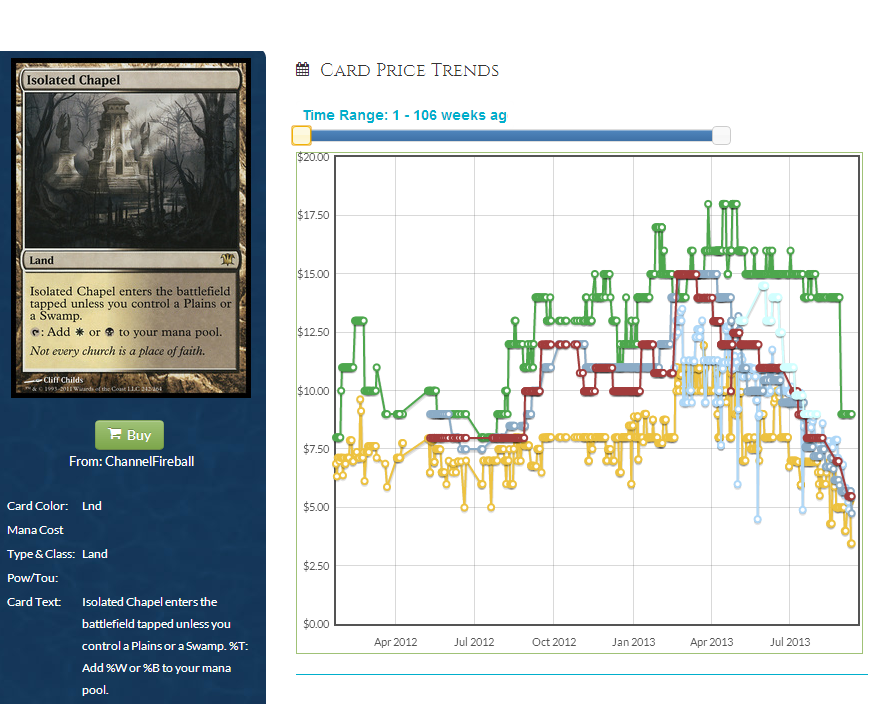 Finally, after enjoying their time in the sun (which is actually autumn and winter), the following spring rolls around, and the circle of life continues. They too follow the footsteps of the prior set’s lands, just as those did one year earlier. Looking backwards, the Shocklands have followed this exact trajectory to date, and are poised to break out in short order. Before them, the Checklands, the Fastlands, and the Zendikar fetches have behaved accordingly.

There is no reason to expect the Scrylands to deviate from this pattern. They’re preording for $5-$9 at the moment, but they’ll be sub-$3 soon enough. I’ll personally be vacuuming them up as soon as they dip that low, and if I see any hit $1.50 on a retail site, there’s a chance I’ll go deep – several hundred dollars deep.

On a completely unrelated and final topic, I’m disappointed that the B&R list didn’t have any changes to a non-pauper format. The formats may be reasonably stable, but there is no reason they couldn’t have shaken things up with some low-impact unbans in Legacy. It leads me to believe that they simply weren’t thinking about it rather than they closely examined their options and chose to do nothing.

See you next week when I do a (mostly) full review of Theros.