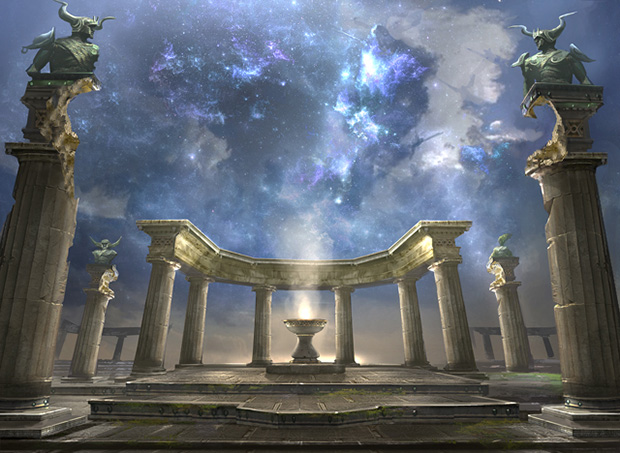 It’s felt like a long time coming, but then again, with the sheer number of products Wizards is putting out, and the growth of the game in general, we’re getting more and more Magic product to choose from.

For casual players, Theros is another set full of flavor and themes to build around. I’m going to go over some of the cards I feel will be showing up in assorted Cubes, Commander, and other casual playgroups.

These are cards that will have a certain value for a long time, like Darksteel Plate or Lurking Predators. Some of these will hit the bulk box, others will not dip far in price. I’m here to tell you about their long-term casual appeal.

First of all, anything with Bestow is appealing. Everyone likes getting options and value, and having a creature or an aura is going to see some play. In case you had not noticed, Serra’s Sanctum has gone on a roller coaster ride lately, and as a reserved list card, it will never be printed again. Its price spiked when the enchantment theme was announced but if you need one, grab one now before it happens again. 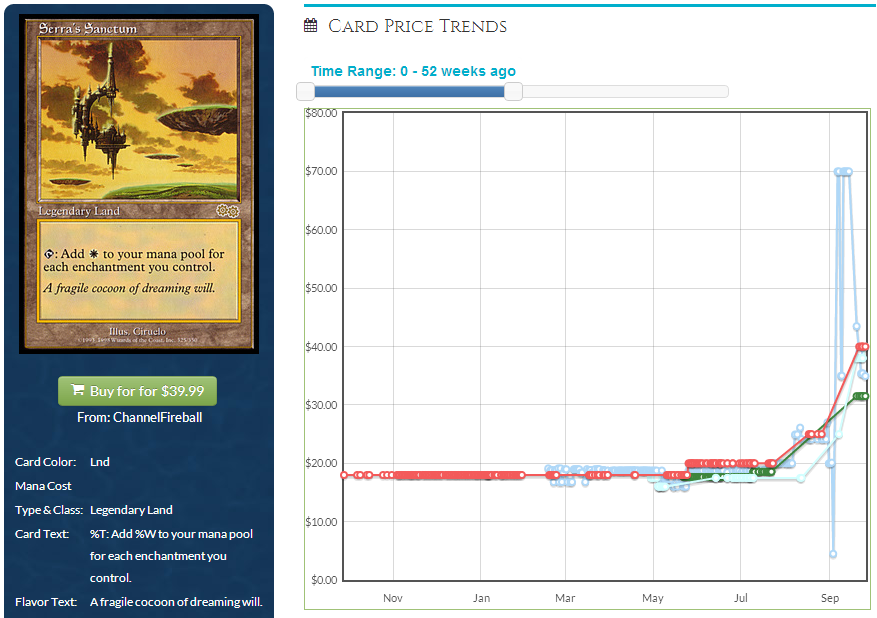 Now, onto the specific cards:

Chained to the rocks – Fantastic flavor and an incredible bargain. I know a lot of people have built Boros decks recently, often combining the two Ravnica blocks, and this will fit right in.

Elspeth, Sun’s Champion – I won’t predict how much Standard play this sees, but the ability to get lots and lots of free tokens will be used in many casual decks. Elspeth Tirel is comparable and she’s $10.

Gift of Immortality – Often, a card will gain its casual appeal by being awesome in Limited formats. We open something sweet, it wins games for us, and then we want to build a deck around it at home. This is exactly that sort of card. It’s got some timing issues, but it’s worth noting that this is three mana and can be fetched by Zur the Enchanter decks. (Sigh.)

All five of the Gods – The new card frame makes these and the weapons very desirable foils. I would expect to see people building all sorts of decks to take advantage of these cards. Of special note is cards like Followed Footsteps and Cackling Counterpart which create tokens that are a copy of a creature; these tokens do have a mana cost and aid in your devotion.

Bident of Thassa – I love this Courtly Provocateur or Goblin Diplomats sort of effect. Any time I can make my opponent do something, I’m on board. Giving all your creatures Curiosity is a winner as well.

Curse of the Swine – This is my pick for the casual card of the set. We’ve had Pongify and Rapid Hybridization for pinpoint removal in the past, and this card is going to see play all over the place. It might even be good enough for significant Standard play, when coupled with Jace, Architect of Thought. Even if it doesn’t get played in tournaments, it’ll go into any casual blue deck and do a lot of work.

Gray Merchant of Asphodel – Zombies are one of the top casual tribes, and this is absolutely going into every zombie deck. For me, I’m really going to love using my Balthor the Defiled to bring this and a stack of other zombies back at once, and draining everyone for a bunch.

Hero’s Downfall – Murder saw very little play in Standard, as was the case with Dreadbore. I don’t see this as being much different. However, I can see this being a desirable card to have in most EDH decks and in other formats, where everyone loves options.

Hythonia the Cruel – My all-creature EDH deck is drooling hard, though if you’re playing this, you had better hope no one is playing Chameleon Colossus or other changelings. Do not underestimate the number of all-creature decks out there – demand for this type of card will be higher than you think.

Anger of the Gods – This is a sweeper that will show up in a lot of Cubes. It will be up to the Cube designer whether to play this with or instead of Pyroclasm given that third mana in the cost, but the third point of damage can be worth it.

Hammer of Purphoros – As another Haste enabler, it’s always going to have appeal. The additional ability to turn excess lands into hasty 3/3 tokens is a definite bonus.

Stormbreath Dragon: Yet another mythic dragon; not nearly as good as Thundermaw Hellkite. That said, even terrible mythic dragons tend to keep at least some price because we love our dragon decks.

Polukranos, World Eater – A 5/5 for four mana with no drawback is a good place to start. The fact that he can get monstrous and stomp chump blockers pushes him over the top. I definitely can’t wait to add him to my Experimental Kraj deck and do it more than once.

Ashen Rider – Ashen Rider immediately overrides Angel of Despair as the reanimator target for many sorts of decks, be they Legacy, Cube, or even Modern. I will say I’m a bit surprised that this isn’t an Angel or Demon for Kaalia of the Vast decks though.

Ashiok, Nightmare Weaver – Finally, the mill deck gets a Planeswalker. Oh, wait, they’ve had Jace, Memory Adept for a couple of years now. What we get instead is as grindy as possible, closing out games exactly like Nephalia Drownyard. It’s a bonus that you don’t have to fear Eldrazi triggers reshuffling the library back in, but you’re exiling just three cards a turn. In an EDH deck, you’re looking at 20+ turns. At least at the kitchen table he’s more powerful.

Daxos of Meletis – Lots of words to say what it does, but this sort of ‘play with your opponent’s deck’ effect is always fun, and rare in this color combination too. (See: Praetor’s Grasp)

Prophet of Kruphix – Seedborn Muse #2 in so many decks. Sign me up.

Xenagos, the Reveler – I love this card so much. It does everything I want it to; including having an ultimate that is fun and random and something I would try to do multiple times.

Akroan Horse – It’s got the flavor. Icot’s got the effect. All sorts of casual decks will enjoy this card, not just Zedruu the Greathearted EDH.

Colossus of Akros – What’s not to love about big, trampling and indestructible?

Nykthos, Shrine to Nyx – I am nowhere near as high on this card as some others are. It’s certainly no Cabal Coffers, though I understand why the comparison occurs. I’m always leery of ‘win more’ cards and that’s exactly what this is. It doesn’t work with tokens and it’s terrible after the board has been wiped clean.

The Scry lands (RG, BW, UB, UG, RW) – These are the real deal. A Scry 1 is just a peek but it’s so good when it’s free! Powerful cubes with more dedicated and awesome duals won’t take this, but you’d never convince me to leave them out of EDH decks. Best of all, their price is still falling and the set hasn’t even been released yet. I’ll be trading for a lot of these.

I hope your prerelease experience was awesome, and your release day is even better!