The day this article goes up, Wednesday October 9th, will be one day before Pro Tour Theros begins our first earnest endeavor into the Mediterranean sun-soaked Standard format. I’m going to point out some cards I’ll be keeping a close watch on over the weekend, and I recommend you do the same.

This is one of the cards I most expect to see considerable price movement on in the wake of the Pro Tour. Advent of the Wurm was a 4x in the last winning PT deck, and just put 14 copies into the Top 8 at SCG Cleveland last weekend. The card may or may not have been mythic at some point in design. Simply put, the card’s power level is superbly high and the current price of sub-$4 is way too low for what it is capable of. Advent of the Wurm is one of the top two Selesnya cards in Standard.

I will refrain from rambling about the various ways in which the card is excellent, but suffice to say I feel there’s a very good chance we’ll see it at the Pro Tour, and the price could easily triple from where it is at the moment. How confident am I? I picked up 26 copies myself just a few days ago.

While we’re on the green train, I’ll flash this guy in. He did not show up at the last Pro Tour like Advent of the Wurm did, but of course he was not legal then either. He did however have a great showing this past weekend at SCG Cleveland, as well as having been on the receiving end of a lot of praise from various PT-grade players. The lowest he has managed to dip so far was just under $2, but he is now firmly in the $4-$5 range as of Monday the 7th. If he is still in this range as of Wednesday, he could quite easily hit double digits with a strong showing over the weekend.

I will say that unlike Advent of the Wurm, if he does crest $10 that price will be comparatively a lot less stable. Advent of the Wurm is now out of print and supply is at the maximum, which means there won’t be much working to push the price lower if it does see a spike in demand. Boon Satyr, however, is at the start of his journey, and we have nearly a year worth of drafting, MTGO redeeming and box-cracking before his numbers settle. The result of all of this is that if Boon Satyr does indeed pop, I would sell any available copies into the hype quickly. 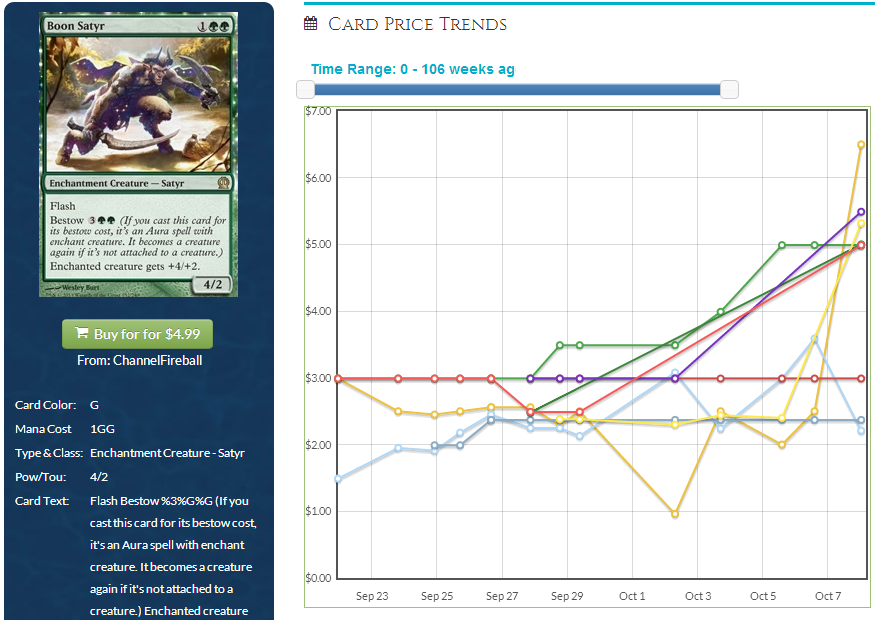 Prime Speaker Zegana is the guild leader that is seeing the least amount of play relative to power level. Zegana Bant was quite a thing for a stretch there, and she had the ability to run away with the game almost immediately if she resolved alongside any reasonable creature. She’s currently at an astounding $2.50, which means she has absolutely nowhere to go but up if anyone anywhere casts her at any point.

Zegana is strong enough to show up in controlish Bant or BUG lists, as well as act as the curve topper for a more aggressive Simic deck as a means to refill after dumping a slew of massive threats such as Kalonian Hydra. That she is good in various styles of decks is great news for her price potential. Furthermore, she falls on the right side of the new Legend rule. Before we move on, one last tantalizing thought: Corpsejack Menace + Zegana. Aw yiss.

Hopping to the other side of the color pie, Underworld Cerberus remains my pick for most likely breakout of the entire Theros set. Has this been cast against you yet? It is obscene. The card is essentially unblockable, which on a 6/6 for 5 in BR is no laughing matter. Should your opponent manage to kill him with something like Murderbore, you get to refill with all the obnoxious creatures your they already dealt with.

Like Zegana, Cerberus can fit into multiple strategies. Following up several turns of pain-in-the-ass creatures like Boros Reckoner with Cerberus means that life will be miserable should anyone remove him. Alternatively, use him in a B/R/x midrangey build alongside a plethora of spot removal to make sure they never actually have three creatures with which to block. I’m pretty close to buying in as it is, and if I see a single copy in a single decklist on Wednesday I’ll make the jump.

Like Advent of the Wurm, the full set of Smiters was main deck in Wescoe’s PT winning list. There were 12 copies in the Top 8 at Cleveland last weekend, and perhaps most intriguingly he has definitely made his presence felt in Modern. He was all over Standard before rotation, and there is no real reason for that to change. Acting as a giant wall against aggro decks and a huge uncounterable threat against UW/Esper, the righteous elephant puts in a hard day’s work against plenty of foes.The price on Smiter has been rather suppressed lately, but now that we’re properly on the right side of Theros, there is little holding him back. Mature-set Standard staples are typically better than $4, especially when they are multi-format capable.

Admittedly I was pretty gun shy at first about the bow, and to an extent, I still am. However I have heard tale that the card is better than I originally anticipated. It is no colorless 2-mana planeswalker, but every time I cast the card I find myself amazed at just how many abilities there really are. None of the modes are particularly spectacular – I do not think anyone will make that case – but just having access to so many gives you a lot of options in a single slot.

Cards with that many moving parts are frequently misunderstood at first, so it is entirely conceivable we have all overlooked it. I’m not convinced by any means, but I’ll be watching for it just the same. At the very least, if you can convince people to do these at $1 in trade at FNM, you won’t regret it.

I’m lumping Heliod in with Bow of Nylea. I’m not convinced about either, but Heliod did indeed show up both in both Worchester and Waco recently, and like the Bow, there’s a bit of chatter that Heliod is better than people are aware of. He is certainly capable of being played in multiple types of decks, so he does at least have that going for him. Keep watch this weekend to see if he’s peeking out from behind the clouds.

When Sire of Insanity was spoiled by @LSV, people were flipping out. Sire hung around for a few weeks, but then quietly slipped into the shadows. Ruric Thar was similarly recognized for being exquisitely punishing to certain strategies, but did not accomplish much for long. I have not heard much chatter about them lately, but they still remain very threatening sixes that are able to hold their own even against the decks they were not built to prey upon. I am not suggesting these two end up $18 or anything, but both are currently available for under $.50 on TCG Player, so it would not take much to see a healthy ROI. Just something to keep in mind.

Reid has been crushing it this year, and I see now why reason why he would stop now. What makes his banner year so thrilling for the rest of us is just how personable he truly is. Aside from his aversion to actually remembering my name, he’s been supremely pleasant and friendly every time I have spoken with him. My only disappointment is that he will likely win a Pro Tour long before I manage to make it there to congratulate him.

Tune in next week when we review the results of the Pro Tour!