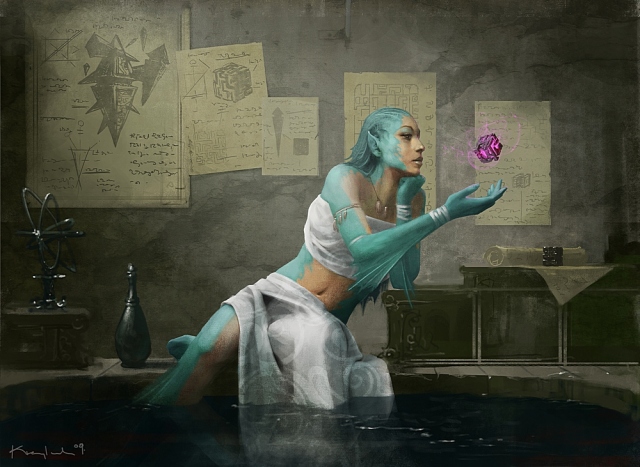 First was Kaalia. She climbed to $15, then $18, and is now showing $26 here on the MTGPrice tracker. Animar followed this past March, although he hasn’t quite gotten as high yet. He’s currently $12. Sometime a few weeks ago Corbin Hosler was pointing out Damia, Sage of Stone to his companions on QS and lo and behold in the past three weeks she’s climbed to $15.

A lot of people were scratching their heads on this last one. Kaalia is easy to understand. She’s what you get if you take the two most popular tribes in Magic, along with a third semi-desirable one, and shove them into a single card. Of course EDH and kitchen table players all over the place are going to want her; she has both the words “Angel” and “Dragon” printed on her.

Animar was a little less obvious but is still understandable. He doesn’t have blatant support for tribes like Kaalia does. Instead, he’s rocking the counter theme. +1/+1 counters are popular with the silent minority as cards like Doubling Season and Parallel Lives have taught us time and time again. He’s also Johnnyrific with that last line, enabling scads of broken interactions in a format such as EDH.

Damia caught most of us by surprise though. What’s Damia do? She…draws some cards I guess? Don’t get me wrong, she’s obviously very powerful. I have a Damia deck myself and it’s probably the best EDH deck I’ve built so far. Those are the three best colors in EDH by a wide margin. But her effect is just not splashy. She doesn’t have the word “Elf” on her, she doesn’t enable an alternate win condition, and she doesn’t enable any combos that are going to make your buddies jealous. She simply generates value.

At that point, it was pretty clear everything from Commander was on the table. Who would be next? Karador, with his serious graveyard synergy? Graveyard strategies have always been popular with casual and spikey types alike. Riku? Riku does some pretty awesome things with doubling both spells and creatures, another fan favorite. Edric already popped awhile ago after Drew Levin suggested him as a Legacy spec.

When I looked over the Commander list at that time Ghave jumped out at me. A buddy had a Ghave deck and I remembered him being exceptionally strong. Being a one-card enabler for all things tokens seemed excellent to me. We already know that type of effect is popular and Ghave can turn it on all by himself. He was super cheap, with plenty of copies under $4 available. I decided to run with it. I tweeted about having purchased thirty-five or forty copies. Forty-eight hours later I was rewarded. Ghave jumped from the few bucks I paid for each copy to over $10 on TCG. A clean, fast, easy purchase. My spec had more than tripled in price. Now it was time to roll in all the money I had made.

A little while after Ghave spiked I had a slightly dismaying revelation.

I’ve been staring at this pile of Ghaves on my desk for the last week or so now and I’ve decided to use it as an example of the actual cost of speculating like this. How much do you really make on a spec?

Here’s my TCG order of Ghaves. You can see I bought twenty-five copies at $3.35 each. I live in New York, so I get the privilege of paying sales tax at TCGPlayer. All said and done I paid $3.64 per copy of Ghave. That looked real good when they were getting relisted on TCG for $15 at first.

Now here I am ready to sell my Ghaves. How should I out them? Let’s look at the most painless process; buylisting. Buylisting is really the best option for anything you spec on for more than a few playsets. If you bought twenty copies of Sphinx’s Revelation when they preordered for $6 then eBay would be your best bet. That’s only five playsets so it’s easy to ship them. What if you bought three hundred Burning Earth for $1 each though? They jumped to $4+ TCG at one point, but have fun selling seventy-five playsets on eBay. Even if the entire process was fee-free the time it would take wouldn’t be worth the extra scratch you’d make over buylisting. 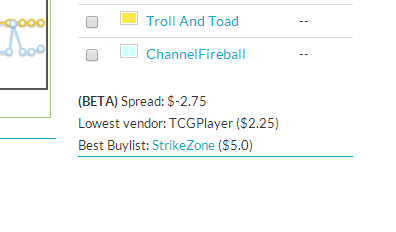 Using MTGPrice, I see that the best buylist is currently StrikeZone at $5 a copy. Oh. Hrm. Ghave is over $9 mid on TCG right now, but the buylist is still only $5. That’s kind of a bummer. Even though my spec looks excellent on retail prices, my profit margin is actually a lot smaller than you would think.

You see, when you look at specs it’s easy to compare retail to retail. “I bought at $X, and now the card is $4X.” That looks like you quadrupled your money. The reality of the situation is that you’re comparing retail to buylist. You paid $X at retail, but you aren’t selling at $4X retail. You’re selling at $Buylist, which is $2X if you’re lucky. It’s still a profit, but it isn’t going to make you nearly as much as you thought it would.

Alright, so I’m going to sell these twenty-five copies of Ghave to StrikeZone at $5 each. That’s $125 for all of my copies. Now I just need to get them all to StrikeZone. Shipping four cards in a bubble mailer is $2.91 with delivery confirmation, so I’m going to ballpark about five dollars in postage. Don’t forget your sleeves, hard loaders and bubble envelope though. We’ll say that’s $1 for everything together.

Looking at StrikeZone’s buylist page, you have the option of receiving your payment as a check or via PayPal. There’s a $3 processing fee on checks and PayPal takes around 3%. SZ will be sending me $125, 3% of which is $3.75. I guess I’m taking the paper check.

Alright, I’ve got the check in my hands. After shipping the Ghaves to SZ and getting paid, I have $115.25 in my pocket. It originally cost me $91.08 to make the order, so how much did I make?

Less than twenty-five bucks. That’s a bit under $1 a copy. How long did it take me to do all of this? At least an hour right? The experienced buylister can do it in under an hour, but not all will accomplish the task that fast. So I made roughly $24 an hour. That’s fine I suppose, but it isn’t anything remarkable. Some of you reading this make less than that at your job, some of you make more. Most of us can agree that the absolute value of $24 isn’t all that much though. It’s probably most of the bill for some takeout Indian food for you and whoever it is that’s currently tolerating your company.

I could possibly try eBay for outing my Ghaves if the buylists are too low, but a quick search there shows me they’re selling for barely $5. Over at eBay you need to ship each card individually, and you better do it with tracking unless you want to get royally screwed. That’s going to destroy your profits to the point that you would actually lose money selling copies.

You also won’t be selling these as playsets. At least with those theoretical copies of Sphinx’s Revelations you could sell them as sets. People would want all four. But Ghave is a commander. Nobody needs more than one copy. Keep this in mind in your future spec purchases. Can you sell them as playsets or are you only going to get buyers on one copy at a time?

So where did it all go wrong? How come I made so little? Didn’t my spec basically triple?

Well yes, yes it did. At retail prices.The buylists never reflect that though, at least not right away. The buylists on Ghave may eventually get up to $8 or even $10+, but it will take continued, sustained demand and enough people buying the card at $15+ to push them that high. That could very well happen, but not overnight. Unless the card we’re talking about is a breakout combo piece it will take weeks and sometimes months for buylists to climb that much.

There are lots of other factors to be aware of here as well. Not every flip is going to behave quite like this. Sometimes the seller will flake and refuse to send you copies, in which case you accomplished nothing except being $100 short for a few days. Other times the cards will get lost in the mail and you’ll have to argue with the TCG and the seller. Sometimes they’ll be damaged or otherwise not quite NM. Maybe the buylist won’t even need all the copies you’re selling. In fact, SZ only wants eleven Ghaves. What do I do with the other fourteen? Perhaps the store will be one of these that jerks you around, and once they have the cards they’ll offer you $3.50 each instead of the listed $5. If you sell your spec on eBay you have to deal with shady buyers that are going to take any opportunity to take advantage of you. (Hence the required tracking on anything sold through eBay.)

Heck, what if the card you speculated on didn’t even rise? Or only gained twenty percent? All of those potential issues only arise if the card manages to jump enough to be worth selling. There will be plenty of times where that doesn’t happen. Into the box of shame they go. Sometimes the buylists rise a little faster too of course. But how often do you think that happens compared to one of the above situations?

What I want you to take away from all of this is that speculating is not equivalent to printing money and that you are likely to make much less money than it seems like you would. When a card doubles, triples, or even quintuples on the surface, most of the time the profit realized by the people who got in on the ground floor is zero to maybe thirty or forty percent of their investment. It’s time consuming if you’re new to the process and it’s fraught with hidden risks. There is the potential to clean up for sure, but every time a card jumps from $3 to $11 it doesn’t mean that a shadowy cabal of speculators just quadrupled their money. It means a bunch of people that owned between ten and two-hundred copies made 25% of their investment.