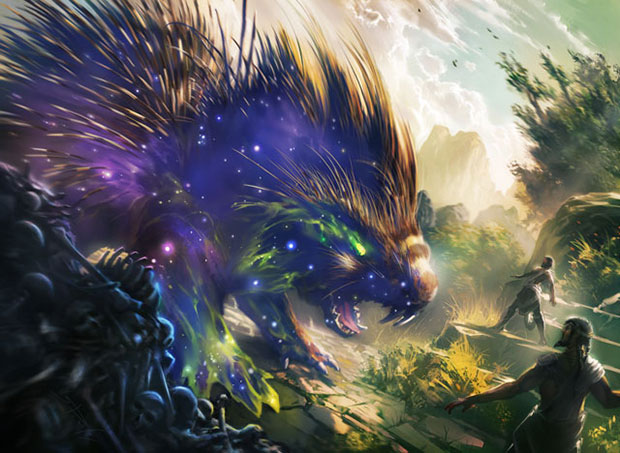 Journey into Nyx has given us some very interesting cards to use in casual formats. Some of them will be niche cards at best, but others are going to see a lot of casual play even if their price isn’t very high.

I’m going to rate these based on what I’d do if I opened these at a Release Event, with the set still new and prices high.

This cat does it all, unless you’re losing. His lack of board impact means NOTHING to the superfriends decks, the ones that play almost every Planeswalker and Doubling Season. (Except Tibalt. No one plays Tibalt.)

This Ajani not only completes the two-color combinations for Planeswalkers, he digs for those friends quite quickly. You’re going to sigh when he lands, because he’ll grab another annoying card almost immediately.

I don’t see this making a big splash in Cube, it’s a bit slow for that, but if you can get $25 in trade I’d make such a deal. A warning: as a mythic PW in a third set, he’s got a very real chance to spike hard during the next block. Better to take the sure thing, though.

I admit I misread this card. I thought you’d be able to cast it without paying the mana cost. Instead, we get the pseudo-draw of Chandra, Pyromaster. In the next year, in Standard and in casual games, you’re going to have to correct someone how it works far more than you want to.

Even with that, it’s a card with both double strike and trample, a combination that has only been on Dragon Tyrant so far. (Someone forgot Greater Morphling. -ed.) Any equipment, any pump spell, and this guy is ready to set the world on fire.

For all sorts of reasons, this is going to be a popular card in casual games. Fun color pair, enables big spells, no maximum hand size…and indestructible on top of that. At first I thought it was lame that the mana became colorless, but then I realized that if the mana kept its color, you’d need many colors of dice to keep track of what was still being saved.

Exiling enchantments has never been more necessary in EDH games, for this God and its kin.

I understand why this needs to exile itself after use. I’ve seen Mindslaver/Academy Ruin locks and Wizards wanted to avoid adding another one of those. I do like the point-and-click nature of this spell: No warning, no chance to get Krosan Grip-ed before use…just take their turn. Done.

I think this is going to be the card that keeps its price higher than expected for a while, like Primeval Bounty in M14.

Grave Pact is a little rough on the mana with triple black, and others can see it coming. Giving it flash means that the surprise value is going to be very, very high. Having some iconic art (especially in foil!) doesn’t hurt at all. I don’t think this is going to be a Standard player, but it will be a mainstay of kitchen table Magic for quite some time.

I told you last week to trade everything you open, but at certain prices, there are things I’d try to trade for this week in the release event (All prices as of Wednesday):

Mana Confluence at $15 – I will be surprised if the big MC goes below $15 for its time in Standard. The foils are at an appropriately ridiculous price, indicating the appeal of this card in casual/pimp formats. I’d be happy to pick these up at $15 in value, because it won’t go below that for very long, if at all.

Temples at $6 – The two temples of Journey into Nyx are going to be the rarer ones, as I’ve covered before. I think $6 is a great price point for lands that I’ll be trading away at $10 in the middle of the next block.

Godsend at $13: While the effect is neat and there’s a chance of Legacy play in the True-Name Nemesis matchup, it’s just too much mana. More likely this settles in around $7 for the casual crowd.

Prophetic Flamespeaker at $10: While I think you’ll see a lot of this card, it won’t hold this price for long. A spike is possible, since it’s a mythic, but the safer play is to get out now. If it hits $15 in a year, oh well. Look at something like Deadbridge Chant to see the other path it could take.

Good luck at your events!

One thought on “The Cards You’ll be Sick of”