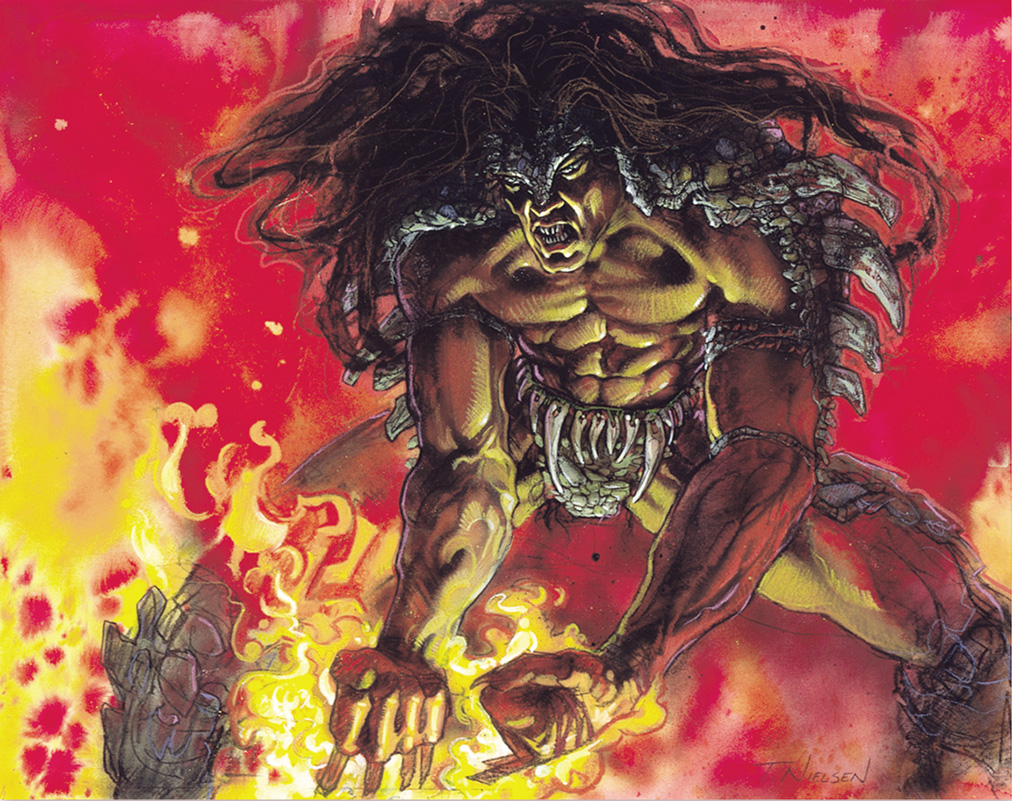 I only wish I had put a finer point on it. Yes, that’s right. It’s finally happened. We’re getting a foil Force of Will. Think of how awesome your Legacy deck is finally going to look. The only foils missing will be the duals!

Oh, you didn’t think you’d actually be able to afford them, did you?

Before we figure out exactly where these are going to land, let’s step back a bit and examine judge promos at large. I want us all to know what’s possible. I’ve compiled a list of every judge promo that’s been printed and its (rough) price. Some of these may be a surprise to you if you’ve never looked. For instance, did you know Stroke of Genius was a promo? Tradewind Rider?

I separated the list into three categories because that will be the metric I am most interested in examining. I lumped all the exclusively currently-competitive promos together, all the strictly casual/EDH ones together, and then all the cards that blur those borders.You may have some disagreement about what column some of those cards fall into, but overall I think that’s a pretty reasonable separation. What immediately jumps out to me is how much more valuable the competitive cards are than the ones that are currently only playable in casual formats. Even if you cut the earliest six casual cards out of the equation as hailing from a bygone era of Magic, the casual cards are still barely half the value of the competitive ones.

Also interesting is that the cards that appeal to both markets are worth slightly less than strictly competitive cards. Part of that may be how I defined “both.” I’ve got things like Goblin Welder, Entomb and Mishra’s Factory in the both column that may be more appropriate in a different category. Still, that wouldn’t change the lists too much depending on where you moved them. If you shuffle some cards around the average of the both column may catch up in average price to the competitive ones, but they wouldn’t overtake them by much of anything.

Let’s make that point a little more clear: Cards that are strictly competitive in nature are overall the most valuable promos. The average price of cards only playable in casual formats is about half that of the competitive cards. The cards that are desirable for both formats are worth roughly the same as the cards only valued for competitive play.

That last sentence tells us that on average, competitive play is by far the biggest indicator of value. Is card X playable in Legacy? Then the promo is going to be worth about $100. Is it playable in EDH too? Well, it’s still going to only be around $100. Apparently casual demand doesn’t push the price much higher on already-playable competitive staples.

Another aspect of all of this is age. Take a look at the last two years; 2013 and 2012. All five competitive cards are well represented in Legacy, and all five are $90-$200. All six casual cards are $15-$40 each. That’s a huge gap. But as you move further back, the lines start to blur a bit. Moving into 2011 and 2010 the average value of the competitive cards gets even higher, but the casual cards are gaining too. The outlier of Mana Crypt comes in at an absurd $250, and we get Wheel of Fortune pushing $100 as well.

Once you get into 2008 and earlier, the distinction is gone. You’ll notice less and less cards in the competitive column past 2009, and only three or four are nearly as heavily represented as the cards from 2010-2013. What’s going on here is the changing face of Legacy. Judge promos from 2007 were from a different era. Orim’s Chant, Exalted Angel and Living Death may have been constructed playable at some point in the past, but those days are behind us. Meanwhile the casual cards are all over the place. Staples like Demonic Tutor and Sol Ring command $200+ price tags, while cards from days of Magic past are $10 and $15. I’m also noticing that the cards that belong to both formats hold their overall value much better as we move back in time. Even a cards like Mishra’s Factory or Yawgmoth’s Will, which are only barely competitive, are still maintaining respectable price tags.

This is another valuable lesson. Competitive cards are worth a lot while they’re competitive, but formats are fickle and subject to the ravages of time. If a card drops out of competitive play and into the realm of kitchen tables it stands to lose a lot. Meanwhile, casual all-stars are only going to gain as time goes on. They have to be true staples though. Additionally, a mix of demand will help keep older judge promos afloat quite well, even if they’re not hot tickets in any particular format.

One thing to keep in mind is quantity. Those older judge promos were printed in much, much smaller amounts than the newer ones are, just as with current Magic sets. If Magic plateaus around 20 million active players you’re going to see the old promos settle at much higher prices than promos like Bribery or Genesis, even if they see comparable play, simply because of the quantity available. Another quick point: any good judge promo from pre-modern borders is going to be the safest of safe investments. Of course they’re mostly absurd already, but you absolutely cannot lose on them.

What have we learned from all of this that we can apply to our new promos? Competitive play is far and away the major impetus behind price on new promos. Casual play can’t keep newer promos up, not for the first year or two at least. Top tier casual staples will rise in price, but anything below the upper 5% should settle in the $20 to $50 range.

So how about those new promos? Four generals and a premium green enchantment. The generals are a bit of untrodden territory, as Wizards has only really started pushing Commander in the last few years. If we take a look at the Commander’s Arsenal Kaalia we see she’s around $30, which should be a fair benchmark for these guys. Nekusar may end up the highest simply because he seems to be capable of driving the prices wild on many ‘draw extra’ cards, but then again the people playing those decks may not care much for a $50 foil general. Meanwhile, Greater Good is reasonably well represented in EDH according to metamox. It looks like it is just about as popular as Genesis, which is currently $20. Both of those will tick up over time, but I’d be surprised to see them more than double in the next five years. Now THOSE are some promos. That Elesh Norn is quite possibly the coolest promo we’ve seen out of Wizards in years. That writing is Phyrexian if you are unaware. She’s awesome as heck, and people have taken notice:

This will absolutely come down, as she should reach typical levels of distribution. I’m not exactly sure when she’s going to be hitting judge packs though, so her price may be kind of nuts all the way out through the end of next year. She’s a bit different than our other competitive promos in more ways than one. You’ll notice that in the list above not a single card with competitive demand was strictly Modern playable. Elesh Norn is mostly unrepresented in Legacy, so all her competitive demand will be from Modern. At the end of the day I don’t think it’s going to matter though. If she was just another foil copy with a different set symbol her price wouldn’t be noteworthy, but that Phyrexian script is going to keep her high. My guess is that she’ll probably dip towards $90-$150 at her lowest. It could be a very long time before her effect is upgraded, and even if it is the promo is going to retain demand based simply on the uniqueness. Hold off for now, but when it gets close to $100 make sure you grab any you need.

Sword of Feast and Famine is roughly as played as Sword of Fire and Ice in EDH, Modern and Legacy. Expect it to start high at release, dip as the judge packs are released, then start climbing once its run is over. The judge Sword of Fire and Ice is currently $120 and it’s about three years old, so that gives you an idea of what to expect.

Let’s understand the facts first. We know it was sent to somewhere between 1,000 to 1,500 judges. The announcement read as if a single copy was sent to each judge, but I’m hearing reports that people got playsets. That means we’re most likely looking at a maximum of 6,000 copies on the market right now. While there was initial panic about the scarcity, Helene Bergeot confirmed multiple times that night that they would be available through other avenues in the future. Nobody is entirely sure what this means yet. Are they going to be the mythic rare of judge promos? How many more will we get? It’s very hard to say.

Let’s say we end up with roughly 10,000 copies of Force. That’s 2,500 playsets or so, depending on what the actual distribution ends up at. How scarce is that? One way to think of that is fifty playsets per state. Montana probably doesn’t need fifty sets, but California and New York sure as heck will.

The Forces are selling for around $1,000 right now, and that will come down. A bit. I think the absolute lowest they could possibly hit is $300-$400 unless there end up being many times more copies on the market than I’m predicting. Once they’re done distributing, the price is just going to keep ticking up and up and up. Force of Will is one of two banner cards of Legacy, and the other one already had a MM foil and an FNM promo. There is no other Force foil, and the original card is murky and just plain ugly. Any tier one Legacy card released in this capacity would have a hefty price tag, and this one is just going to get multiplied by status, lack of prior printings, and typically being run as a playset. Once the run is over, there’s no telling what this could reach. I would not be surprised whatsoever to see this north of $1,000 again a few years down the road.

11 thoughts on “Only God and Forsythe Can Judge Me”