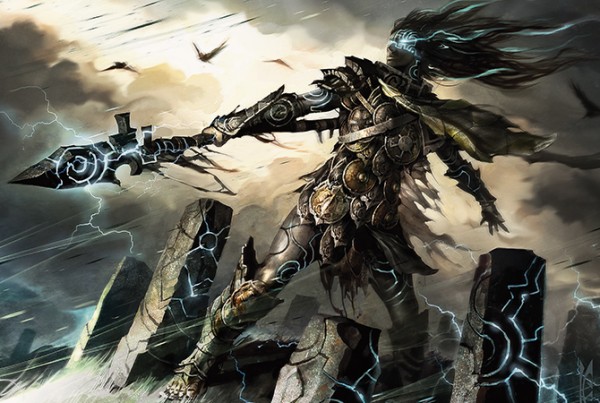 As the years go on, we seem to expect more and more out of our core sets. The bar started with Baneslayer Angel when M10 was released. Its debut year in Standard was awe inspiring. I remember being at my local game store drafting M10 and cracking a Baneslayer Angel in a pack. Unfortunately, white was not to be my deck color and my draft went in a totally different direction. I only wound up going 2-2, which didn’t put me into the contention for any prize packs. Regardless, I wanted to get some value out of my mythic so I went up to the counter and wanted to know what I could get for it. “Yeah, we’ll give you $30 for that one” the guy says. I couldn’t believe it! Baneslayer went on to be a $50 card at its peak in Standard and was a significant force in the format.

Sadly, Wizards did not learn its lesson with Baneslayer Angel and instead decided to up the ante by releasing the infamous Titan cycle into Standard with the introduction of M11. Instead of just Baneslayer Angel, we now had to worry about Primeval Titan, Grave Titan, and/or Frost Titan, with occasionally Sun Titan and Inferno Titan making an appearance (how couldn’t they, the Titans are so much value!). The first three titans all saw prices upwards of $30 or more at their peaks (Prime Time being the most expensive at around $45 for most of its Standard life) while the other two hovered in the teens for their peaks. Standard was this time basically warped around these gigantic creatures – and it was even worse because Wizards reprinted them again in M12! We had to deal with these things two friggin years in a row. In my opinion it made Standard pretty stale.

Which is probably why they discontinued the Titan reprints in M13 and instead opted for Thundermaw Hellkite. Yes, finally red got some love! This was the next $45 Standard mythic and it was actually quite balanced considering. Sure, Thundermaw wrecked plenty of face but also remember that in this same format we had Thragtusk and Restoration Angel – the two-faced terror which I’m sure still haunts a few players nightmares. While this time around the mistake was a rare in Thragtusk, it still warped the format pretty badly albeit in a slightly different way than the titans.

Next came M14. Chandra, Pyromaster probably came the closest to being a $40 card but I don’t think it ever quite got there at least not on TCGPlayer. Similar to M13, another rare altered the course of the format. Mutavault is the first time a core set reprint (from the M{XX} sets) has made such an impact on Standard. I believe the intent here was to help Modern players out however I don’t think anyone got the memo that only Merfolk plays Mutavault in Modern. Theros and Return to Ravnica were not exactly tribal themed sets, so Mutavault couldn’t be that insane right? Well with the onset of Devotion it became quite clear that Mutavault was the card of choice to give the monocolored decks the advantage they needed to start becoming dominant.

M15 on the Horizon

Finally we arrive at the upcoming M15. Why did I just spend 500 words outlining past core sets? Because the most expensive rare or mythic in Standard has a good chance of coming from a core set. Wizards has been overpowering these core sets with at least one or two insanely good cards that will almost definitely affect the upcoming Standard. Since the introduction of new cards into a core set, it has become apparent that we need to pay extra close attention to these sets in order to stay ahead of the curve. Even reprints could significantly alter the format for another year.

Wizards brought back the big creature cycle of mythics to the core set but has nerfed it in a significant way. They’ve now replaced the Titan cycle with the Soul cycle which are a set of six avatars that represent the various planes in the most recent Magic mythos. They are all 6/6’s for six mana with an evergreen ability, which makes them similar to the Titans, however this time around you need to tap a bunch of mana to use their best abilities rather just have them come into play or attack. Even though a lot of people probably think this is rather weak, and lets face it we’ve been pretty spoiled with the Titans to not think so, I have a feeling that at least one or two of them will see Standard play. Whether it is significant or not has yet to be seen however the evidence in the past has shown that splashy mythics that see some play will be priced accordingly. Remember, the set release is a terrible time to pick up potential Standard staples so you should wait about a month or two after its release before picking up potential playables.

Perilous Vault is quite spicy. A new take on Nev’s Disk that exiles everything is pretty sweet. Could this be our new crazy Standard mythic? Or how about the new Nissa, Ajani, Jace, or Garruk? We’re getting a reprint of Chandra, Pyromaster and Liliana Vess so nothing new there since we already know the power level.

We’re also getting enemy Painlands and Urborg, Tomb of Yawgmoth! An Urborg reprint is awesome for Commander players but why is Wizards only reprinting the enemy color painlands? Didn’t they just say not that long ago that they were intending to only print full cycles of lands in sets from now on after Innistrad? Wow, that has to be the quickest take back I’ve ever seen from them. It doesn’t bode well for fetchlands – those hoping to get Polluted Deltas on the cheap may be sadly disappointed when they only reprint the Zendikar ones. Keep an eye out for the painlands because even though they are only marginally good historically once they become Standard legal all bets are off. Players will utilize any land they can to get the best mana fixing, even if they have to play a bunch of Mana Confluences in addition to these painlands. Don’t think just because they were $1 before coming into Standard they will stay that low for long. At least one of them is going to spike at some point.

Phyrexian Revoker is making a comeback, which is cool and goes with the mythic Soul of New Phyrexia. This is also a new development since I had previously believed that cards which are very set specific would be fairly hard to reprint. Not that I think Spellskite is going to be thrown into a core set anytime soon but it still makes me more wary of going deep on something based on the notion that its flavor is too specific to see a reprint in a core set.

As usual, the core set is primed to shake things up. Wizards seems hellbent on proving that they are willing to make more and more drastic changes to the core sets as the years go on. First, it was upping the power level of creatures through the creation of powerful, yet cleanly designed, cards. Now it appears they have instead focused on adding unique new abilities and refining the core set to more align with the current mythos of Magic – instead of generic cards, they are now adding specific flavor to the core sets that pulls from recent and future sets. I’m excited to see how this core set pans out and I will be thinking hard about which cards are going to be the most influencing.

2 thoughts on “Powering Up the Core Sets”