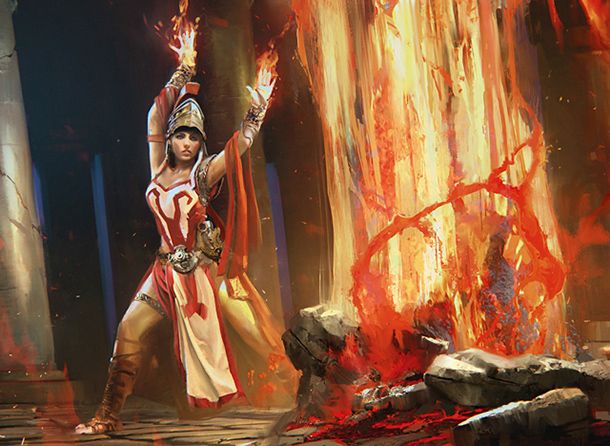 Commander games are usually multi-player affairs that last a long time and leave a lot of bodies in their wake.

Black Market watches all of this carnage and rewards you with a plethora of black mana every turn.

Braid of Fire is the only other card that benefited so much from the removal of mana burn.

There should always be something to do with all of that mana, from recasting your Commander to playing a huge Exsanguinate.

This will always have casual appeal and the more people that adopt the format the better it gets.

I think it is safe to sit on these for a while. The current rules makes this too powerful to reprint in Standard and I doubt Wizards will stick it into a new Commander deck.

Journey into Nyx just brought us Constellation and fueled dreams of abusing Enchanted Evening and enters the battlefield effects.

This is pretty much for casual fun. I have not seen any competitive decks try this out.

The interest has created a chance to cash in on any copies you have been sitting on or pick up some cheap copies.

I would sell or trade these away but I would look at foil copies of Ethereal Armor or Sphere of Safety. Those are cheap and should have some long term casual value for Prison decks of all sizes. Ethereal Armor also sees play in Modern Bogles.

Future Sight brought some of the coolest lands ever designed into existence.

Grove of the Burnwillows and Horizon Canopy have already found homes in Modern and Legacy decks.

Filterlands show up in some Modern builds.

River of Tears is one of most interesting because it gives you the mana you need for a disruptive UB Control deck exactly when you want it. Black mana on your turn for Thoughtseize or Inquisition of Kozilek. Blue mana on your opponent’s turn for Spell Snare or Remand.

Modern Faeries is the only deck that fits that description. A lot of players dreamt of Faeries dominating Modern when Bitterblossom was unbanned but it has yet to make a dent in the metagame.

I would happily trade these away to pick up some cheap Innistrad enemy color checklands.

Nekusar the Mindrazer has been one of the most financially relevant Commanders that has ever been printed. Ironically this is because everyone bough the Mind Seize deck to open up other cards.

They sold True-Name Nemesis and Baleful Strix and then had a ninety-eight card commander deck staring at them begging to be played.

Nekusar turns group hug decks on their ears. Instead of placating everyone when you announce everybody gets to draw extra cards off of your Wheel effects you bring ruin and destruction.

Phyrexian Tyranny just makes the kill come that much quicker.

Every turn you are bleeding either life and mana. Either option keeps you and your combo safe. I like these as toss ins since they were bulk so recently.

If you are sitting on them I would start trading them away. There is not a lot for them to grow and the decks that need them only run a single copy.

Modern Season is here but we have yet to see any major results from UR Storm it is undeniably a powerful deck. Jon Finkel has played the deck to impressive results.

This was the trap. Not everyone is Jon Finkel. Outside of the fetchlands the deck is actually pretty cheap to put together. People will want to try it out will fail to put together the combo before they are swarmed by an army of angry Pestermites or Tarmogoyfs.

I love the card but would advocate trading these into the hype.

Hero’s Downfall took a hit when it was reprinted in the Born of the Gods Event deck.

It was also featured in the heavily drafted Theros.

Conspiracy is here and with M15 only weeks away the supply is about to plateau.

It is also well positioned as the best removal in one of the most dominant decks in Standard.

The finals of GP Chicago was a Mono-Black Devotion mirror match and plenty of creatures met their end to this instant.

In fact the Top 8 featured 19 copies of the card and almost all of those were played main deck as a full play set.

It is used in every black deck including Orzhov, Esper, Bug and Junk decks of all varieties.

Planeswalkers and creatures will not be safe for at least another year.

It has yet to see much Modern adoption but I would not rule out the possibility. If you play Standard I would make sure I had my play set.

This card and Thoughtseize already give the deck some of the best disruption available. Now we just need more black cards to be printed.

This is probably the lowest we will see the card. I would stock up on these and look to unload them around the third set of Tarkir next year.

What a casual hat trick! It is a mythic rare, dragon and it is huge.

It certainly makes an impressive entrance onto any battlefield and if you are running him alongside Marchesa, the Black Rose he can make that entry over and over again.

Unlike many dragons he needs a special place to be reprinted. He uses the Bloodthirst mechanic which has already been repeated so it cannot just be jammed into any random core set.

This card helps you build your army of the undead while hosing graveyard and reanimation strategies.

I like the idea of having lords for popular tribes but with his three printings I am not very bullish. I would trade these into whatever hype is moving it towards $2.

Here is nice little addition to Nekusar the Mindrazer commander decks that most people probably do not even remember.

If you find it someone has probably had it rotting in their trade binder since Visions. I expect the customary Nekusar bump especially as supply is sure to be short.

This enchantment continues the life loss theme while denying your opponents creatures. I could easily see this being a $2 to $3 card as it catches on.

Eidolon of the Great Revel may just be everything that Satyr Firedancer wanted to be was wasn’t.

It will play a role in red burn decks for its entire time in Standard. Keep an eye out this fall. When rotation comes and the card pool is the smallest aggressive red decks usually fare pretty well. Some deck brewers are trying to figure out the new format but there are always those that just want to convert cards into damage as quickly as possible.

The number amount of scrylands that are being played also make this format slower so you can get in several quick strikes before some decks are even set up.

This is not why our Pyrostatic Pillar on a bear is increasing in value.

Modern burn decks are trying them out and they have seen success in Legacy burn decks as well. This weekend at the SCG Open in Las Vegas Bryan Cambidge won the tournament with a red burn deck that ran the full four copies main deck.

The biggest improvement over Pyrostatic Pillar is the ability to attack and the fact that creature removal is more prevalent than enchantment removal.

Why is that upside? When your opponent casts Abrupt Decay, Lightning Bolt or Swords to Plowshares to kill your creature you get a free Shock.

Legacy is a format almost entirely defined by its powerful two and three mana cards so almost every spell your opponent casts brings them closer to a lethal Price of Progress or Fireblast.

Imagine every Tarmogoyf, Delver of Secrets, Stoneforge Mystic and even Daze cutting into their life total.

The field was full of Elves which attempt to spam the board with cheap one and two mana creatures before powering out a huge Craterhoof Behemoth.

With Eidolon on board they would die partway through their combo.

If you want a cheap deck to look into Legacy Burn is one of the most budget friendly and powerful.

Legacy players like their shiny cards so the big movement on these will be the foil copies.

That does not mean that there are not opportunities with the regular copies.

This is a card I would be trading aggressively for.

Legion’s Initiative had promise but failed to pay off. Rather than assembling attackers for Battalion, Standard Boros decks are all about burning out your opponent.

Rotation is coming and with it the last of the Legion’s prayers.

I would sell now. Vendoers are still paying up to $1.25 for them.

You can even find copies for a $1.01. If you can trade these from friends trying to unload them you could turn that into some quick cash.

Amulet of Vigor surprised Modern players earlier this year by coming out of nowhere to use Ravnica bouncelands to power out an early Hive Mind for a win with Pact of Negation.

It quickly went from bulk to almost $10 but a lack of results has caused a steady decline in the price.

I would not count it out. Modern season is here and I think that it is getting to its floor. It is a known quantity now so it is no going back to bulk pricing.

I would look to see if you could pick a few up. It already has seen potential. Any results could cause it to shoot back up.

This card may see play in some Commander and casual decks as a way to hate out recursion and copy your opponents creatures. It was just not popular enough to need to the reprint in Conspiracy.

People have been tearing open Conspiracy packs looking for Dack Fayden and just having a blast. This has been driving down the prices of the some of the reprints.

Fortunately you can still make a little money from there.

Fear Not. Your card will not go unsold.

Ardakar Valkyrie is an angel which gives it casual appeal. It is evasive and has Vigilance to it can always attack, block and make use of its powerful ability.

It is reusable recursion but the reprinting in Modern Masters appears to have over-saturated the market. You only need one copy to play Commander and so it has been in a steady decline for the past few years.

The good news is I do not think it can call much farther. I think it will level off around $2.50 or so.