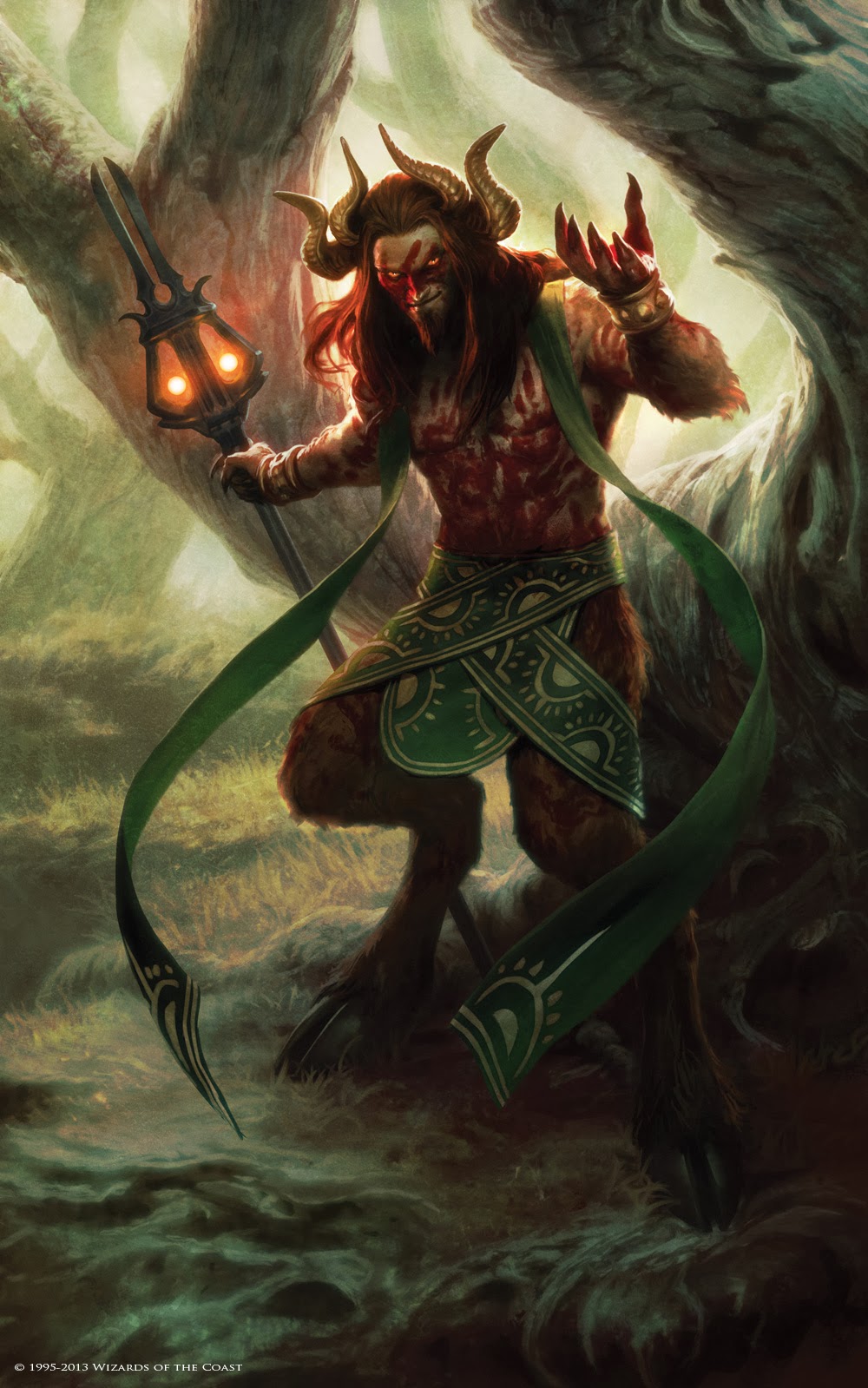 By the time this article is published, I predict that it will be hard to find Xenagos, the Reveler for less than $15. I commented on this version of Xengos in my Theros review back in September last year as a passive pickup, which meant that I recognized his power level but realized that it would take a paradigm shift in Standard in order for his abilities to really shine. When I identify passive pickups in my set reviews, I recommend that you pick them up when you have extra cards to trade or when the price becomes low enough that even if they don’t pan out in Standard they will still stabilize in price to due to casual or other demand. Xenagos was close to $7-$8 for a long time in Standard – for the past six months you could have gotten your copies fairly cheap if you picked them up slowly over time. 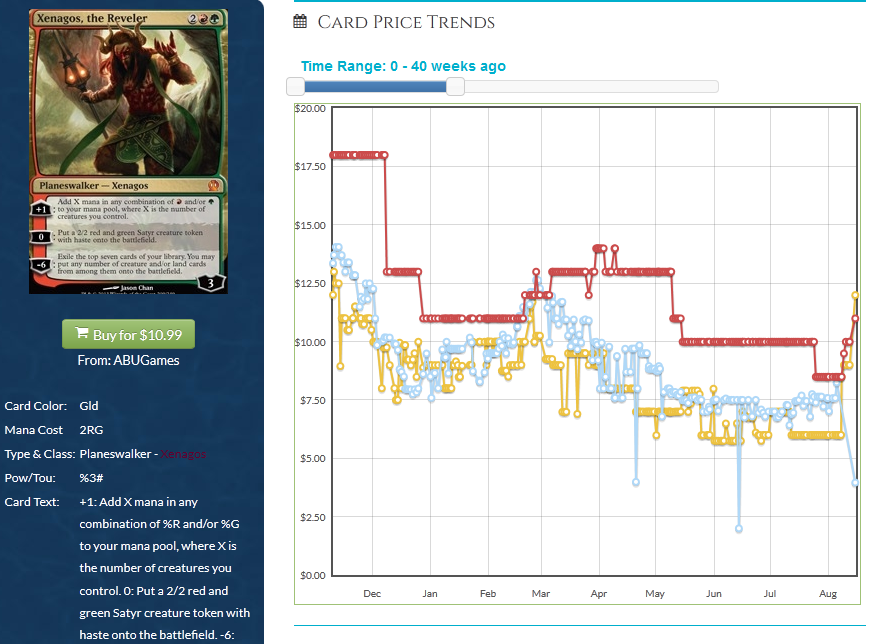 Usually, when a Standard card is bought out at this particular time in the season there is a good reason. Master of Waves and Thassa, God of the Sea were bought out last year during Pro Tour Theros due to the breakout of the Mono-Blue Devotion deck. Yes, you could have made money on them if you had prestocked your cart on TCGPlayer and then executed the purchase as soon as they saw decent screen time from the live coverage. However, in the long run their prices dropped considerably because more Theros was opened and people were able to pick them up much easier once more copies were in the market. Mono-Blue Devotion turned out to be one of the most dominating decks and yet the prices still went since that time last year. 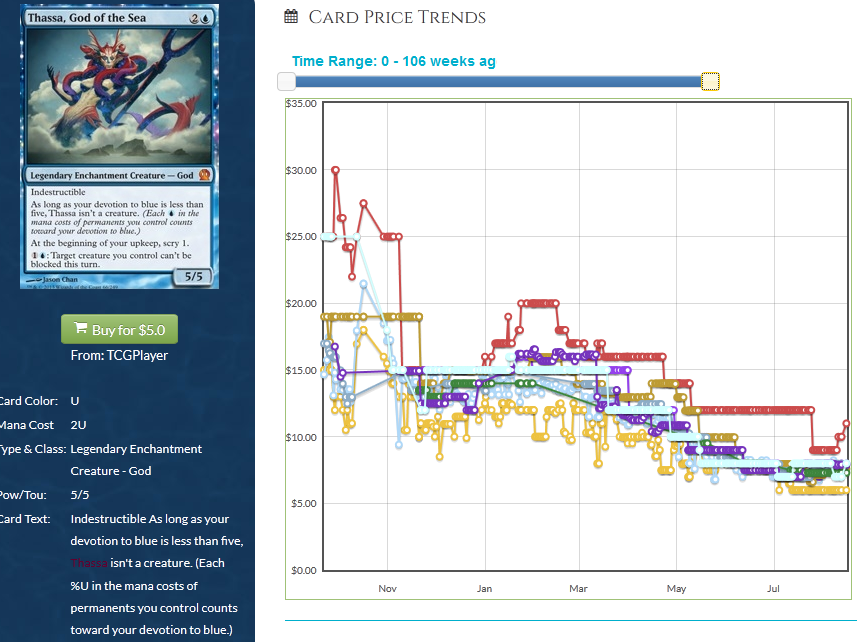 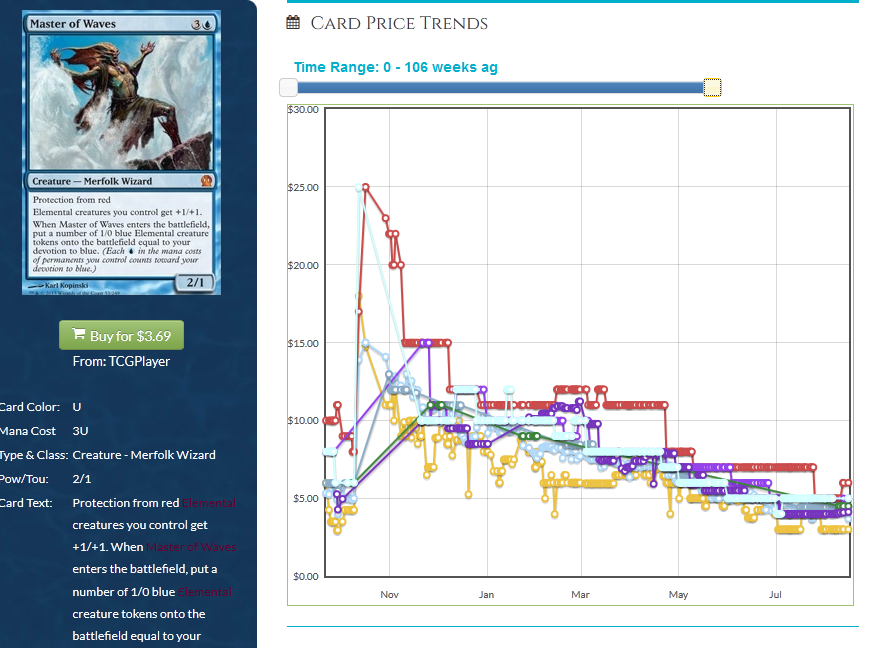 The hype from Pro Tour Theros was mainly driven by a lack of supply. This is not the case for Xenagos, the Reveler because we’ve been opening Theros for an entire year. The majority of the copies that will exist for the next Standard are already out there. Based on Twitter postings from Friday, there was a rumor that the buyout was coordinated.

Then we had a first hand account of Nick Becvar stating that he decided to buy in on as many Xenagos as he could at GenCon. 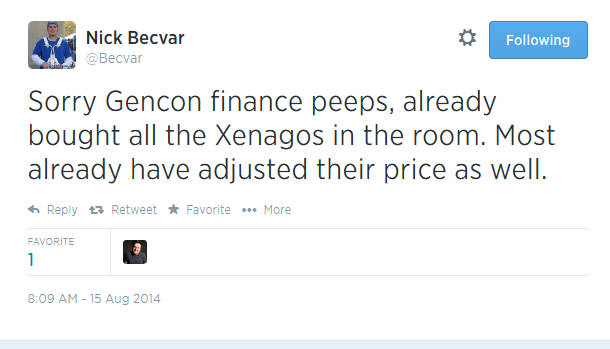 Nick is a well respected member of the MTG finance community so when a card catches his eye I tend to pay close attention. By the time of his Twitter post, all of the cheap copies of Xenagos were gone on TCGPlayer and the mid price was about $16. However, I was able to snag a few foil copies that were still lingering around $19 that weren’t updated to reflect the non-foil price. Goes to show that even if you think you may have missed an opportunity, always make sure to check for other versions of the card including foil versions. The window is small but there are sometimes opportunities to get these deals.

The the reason why Xenagos spiked was the coverage he received during Pro Tour M15. He was in two Jund decks that placed in the Top 8 of the tournament, which was the most anticipated tournament of the summer. He received plenty of coverage from live streaming two weeks ago and players have been picking up their copies since then. Once vendors started running low and realized that people weren’t trading the ones they had back in, they readjusted the prices to reflect this demand.

What Else Besides Xenagos Should You Be Watching?

In terms of Standard I would focus on lands and current non-rotating staples. The scrylands are all great options, since the block supplementing Theros standard is a Wedge set. There is plenty of opportunity for any of the lands to be featured in a breakout deck so I wouldn’t focus heavily on any particular land barring Mana Confluence. Mana Confluence is a nice role filler for multicolored aggro decks, so I can see it becoming important in Mardu (RWB) builds in addition to any other Wedge or two color aggro build that pops up and does well during the fall. It is also from Journey Into Nyx, so the 6:2:1 ratio will also have an effect on the price after rotation.

Speaking of aggro, Soldier of the Pantheon is another of my top targets. Ever since the fall set was announced to be Wedge based I started picking up this card en masse. This is a short term play – if the card goes up substantially in price during the fall I will also be looking to get out then. It will have a tougher time sustaining a high price once the control decks become more established.

You should also be stocking up on any extra copies of Thoughtseize and Hero’s Downfall that you can find. These have the highest chance of being the premium black cards of Standard in the fall. I would focus more on Thoughtseize than Downfall, even though it has a higher buy in price. Thoughtseize is an eternal playable that might have a higher chance of the elusive double spike once the newly announced Modern Pro Tour taking place in February 2015 occurs. Downfall is riskier because a better removal spell could be reprinted in Khans.

Elspeth, Sun’s Champion is the strongest white card right now in sheer power. Her nemesis is Scuttling Doom Engine, which Wizards created to help stave off any potential Elspeth domination of Standard. I’m still not sure which card will see more play. I tend to think Scuttling Doom Engine (SCD) since it is both colorless and a rare, which means that it can fit into multiple archetypes that can support it and it will be cheaper for players to acquire initially so more are apt to brew with SCD.

On the other hand, Elspeth is just so strong especially in control builds. Of course, my line of thinking could be completely changed once Khans comes out but for now I tend to favor SCD as the card that will see the biggest gains percentage wise.I feel like Elspeth has peaked somewhat. She costs six mana, which means that players have fewer copies of her in decks, and she is already at around $20. I can’t see her going up much more from there based on an average two copies per deck. I doubt that SCD will reach Thragtusk level of dominance but there always seems to be a rare from a core set that reaches a really high price…

Lastly, I want to mention slivers. Here my advice is to wait until rotation and pick up any foil copies of M14/M15 slivers that seem to be popular. I think this is the best call for the short and long term. Even if there is a breakout sliver deck it will only be around for about another month. I’m going to bide my time, wait for rotation, and then a few months afterwards try to scoop up any popular M14/M15 slivers for value in the long run.