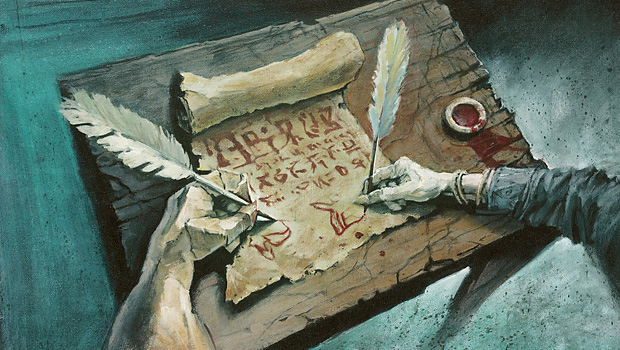 Did you ever tell a family member – any family member at all – that you were at all interested in art of some sort when you were younger? Painting or drawing perhaps? It’s pretty common for kids to be drawn to art early on, even if very few stick with it. It’s a creative outlet and a way to produce a lasting piece of work that they can feel good about days or weeks later.

If you ever mentioned enjoying artwork to an aunt, an uncle, or a grandparent, you know what came next for the following ten years. Art supplies. Every single year. Except they were crummy and unusable every single time. It’s sort of a catch-22. Anyone willing to spend enough money on you to buy you high quality pens or paint supplies would know you well enough that they would know better than to waste their money that way. And yet like clockwork, every Birthday and Christmas, some ten dollar set of markers would show up on the doorstep for you to toss into a box with other unused gifts while you went back to playing Super Nintendo.

While we may have considered this a complete loss of value when we were younger, time has provided us a perspective on the situation a bit more sympathetic with those relatives. To their credit, they were using their limited knowledge of our passing whims as best as they could to provide gifts they thought would be appreciated. If you’re somehow still bitter about this, ask yourself what you really know of the passions of your nieces and nephews, or hell, even your siblings. Providing someone with a meaningful gift that they will truly appreciate is damn difficult, even for those you are closest to.

In order to see what this has to do with us, just replace the word “art” with “Magic” and “paintbrushes” with “Magic cards.” When you’re a child, getting booster packs of cards is thrilling and exciting. I fondly remember cherishing every booster pack of X-Men trading cards I received back then, and getting an entire sealed box for my birthday is one of the few memories I have of early birthday gifts. These days however, gifts including Magic cards are far less special. The issue is that there’s no longer mystery or excitement in the gift of Magic cards. The veil has been pulled back, and as you sit there reading this article, you’re fully capable of going out and purchasing them for yourself. In the next ten minutes you could have any Magic card or sealed product you wish rushing towards your door. It may not be a financially prudent decision, of course, but still, the option is available to you. It’s sort of like ice cream cake. The age at which you can just go buy an ice cream cake for no reason whatsoever except that you want to eat one is exactly the age when you realize it is a terrible idea to do so.

And so we find ourselves the recipients of Intro Decks and booster packs from last year’s core set from well meaning relatives who know little more of our hobbies other than “that card game.” We say thank you, hug the relative, and tell them that it’s so great they provided such a thoughtful gift. Meanwhile you’re staring at that Celestial Archon in the front of the packaging wondering if Target will give you store credit for the intro deck without a receipt.

We feel bad. We really do. They obviously are trying. They mean well. They just…don’t quite get it. It’s like listening to your mom try and describe what you do for a living. How can you be upset when they mean well? It’s in everyone’s best interest if the Magic gifts cease though. They’ll stop spending money on something that’s going to be immediately returned or collect dust in a closet, and you won’t have to feign appreciation for something that is entirely wasted on you. That way you can all get back to giving and receiving the best of gifts: socks. (That’s not a joke).

Today I provide you with a tool. A letter. It is an open letter to friends and family that attempts to gently persuade them that their love can be better channeled. If you’re the non-confrontational (read: passive aggressive) type, just link it on your Facebook wall. For a more direct route, print it out and stick it in the envelope with a thank you card you most certainly haven’t already sent for the last gift they gave you. I’ve provided multiple selections on certain sentences to provide for the most personal touch possible. Feel free to edit and tweak as necessary.

I hope this letter finds you well. I know we haven’t spoken in awhile, but my [mother/father/dog] tells me you are doing [great/terribly/cocaine]. That is [wonderful/a shame] to hear. I’d ask you what the weather is like there in ___________, but given that I have internet access, it feels a bit silly to ask. It’s funny how the medium of communication dictates how much and what is acceptable small talk.

My reason for sending this letter today is a tad delicate. I should preface the content with sincere thanks for all you have provided me over the years as a loving [relative/friend/parole officer]. I cherish the time we have spent together in the past and look forward to many more lovely [hours/outstanding arrest warrants] in the future.

This past [birthday/Christmas/President’s Day/Tuesday] you gave to me a heartfelt gift that included Magic: The Gathering cards. I was touched to see that you cared enough to purchase a meaningful, personal gift for me. Your love and affection shone brilliantly through your action.

It is this particular gift that I wish to speak about today. While the meaning and thought behind the gift were fully and truly appreciated, the actual content did not quite achieve the [excitement/sexual arousal] you may have hoped it would.

Magic cards behave as a commodity, just as gas, silver, and corn do. While silver and gold [and corn] make for some truly remarkable gifts, a simple few ounces of gold without form or function makes for a much less special treat. It is unlikely you would give someone gasoline as a gift, and Magic cards are not much different. Commodities make the world go round, but any particular instance of such is not particularly special or endearing.

One piece of silver lacks distinction from another until it has been crafted into a piece of jewelry. Similarly, there is nothing unique about this Magic card compared to another of the same name. Nothing exists to distinguish it as my Magic card. The result is that cards change hands often, and a card gifted today could be traded away to peers for something more immediately useful only days later. Furthermore, market shifts can and do happen in the world of Magic just as they do on the real commodities markets. A box of cards you spend $10 on today may be worth less than half of that by the time I actually receive it. The only person who wins on that day is the retailer.

This is not to say you should never purchase any Magic cards ever again. A single booster pack, retail $3-$4, is a pleasing trinket or accessory to another package. (Be sure to ask the retailer for the most recent set!) If you travel abroad, foreign booster packs of cards are much appreciated, not only due to their exotic nature, but as a token of a journey you wish to share. (Russian and Japanese especially so!) In general though, I ask for both our sakes that you mostly refrain from choosing Magic cards as gifts. While I know full well that you mean only the best, at the end of the day they lack the ability to strengthen emotional bonds in a way that many other gestures are capable.

My message today is not one of annoyance or complaint, but rather one of honesty and compassion. I look forward to spending many more enjoyable [holidays/nights in jail cells] with you.

[Love/Sincerely/Dictated but not read by],

8 thoughts on “An Open Letter”