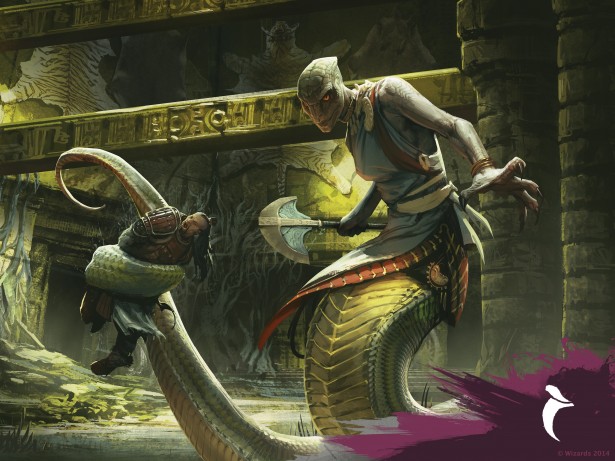 Welcome to the new block and the new rotation. Khans is going to be legal for 18 months, not two years. I’ve preached patience before, because I have learned the hard way that prices are all at their highest on this prerelease weekend!

It bears repeating: Trade away everything you open at a release or prerelease. This even includes the promo cards. The value is going to go down in 95% of cases, so you want to get the most for your buck. Do not trade for anything from Khans this weekend, unless you absolutely have to have it this coming Friday for FNM. You’ll pay a premium this weekend and next.

I’m not going to go over everything from Khans, I’m going to list some preorder prices and what price I’ll be looking for in a few weeks/months.

Surrak deserves his increased price. Each of these is a fun build-around, but five flash mana for a 6/6 that can’t be countered is pretty big game. If this shows the slightest sign of being Legacy playable, you’ll want to jump all over the foils too.

I don’t think Surrak will fall far, but the rest should keep their current price, at least to within a dollar or two. Pre-ordering them is not really necessary, but won’t hurt too badly. It’s got the right converted mana cost and offers the greatest flexibility of any Clone effect ever. You’ll need a very good reason not to run this in any blue Commander deck, or any Cube. I would expect this to creep down to about $7-$10, don’t pay more than that. Foils are a different matter: If I could trade for a foil this weekend at $25 or $30, I’d do that but not more.

If we get this effect at four mana, could we possibly get a combination of this and Vesuvan Doppelganger at five or six mana? Every upkeep, it becomes a different nonland permanent!

I love this card too much! I don’t know if I can be logical and impartial about it. There’s no way to cheat the mana cost, as Chord of Calling or Summoning Trap can do. It’s a greed-testing card in Commander: Do you need one thing now, or are you going to wait until you’ve got a 4-power creature in order to get two more creatures? If you can get it under $3, that seems like a steal to me.

I’ll admit, I’m likely going to be greedy with it, but the correct play will often be to cast it when your board is empty. Keep in mind that the leftovers go to your graveyard to be Delve fuel.

Speaking of Delve fuel! I plan on using this without Delving in EDH, but in Standard, this has a chance to be ridiculously powerful. I’m not yet ready to pay more than $2-$3 for it, though.

I will say, though, that as an instant-speed, end-of-turn finisher, I could easily see this hitting $10 or more. Heaven help us if Fate Reforged contains a permanent that lowers Delve costs, because this will be one of the primary beneficiaries.

I’ve said it, others have said it, read it again: This is going to be the best-selling set ever. The value will be there to crack boxes for value, and the fetches are a big reason for that. Think about the shocklands’ prices during Return to Ravnica block: They sometimes dipped below $10, went as high as $15.

Your first order of business will be to get all the ones you need for your decks. There will be a lot of people who simply get four of each and wait, but I’m not one of those people. If you want to get a playset of each because you brew a lot, that’s totally understandable and I understand the appeal of not wanting to trade for cards every time you have an idea.

I will be picking up a few for Commander, but for casual play, don’t try to hold these long-term for possible needs. Think about how tough it is to trade for a shockland right now. It isn’t! Especially right now as they rotate out of Standard, but there is an enormous supply of shocks out there, and there will be more fetches opened in Khans than shocks were opened in Return to Ravnica or Gatecrash.

Keep in mind that Wizards put Verdant Catacombs in an event deck (Magic 2012’s Vampire Onslaught) so there’s a very good chance that event decks for the next 18 months might contain one, increasing supply even further!

The short version: I don’t believe that you’ll have a chance to gain a lot of monetary value by holding onto fetchlands. Shocklands didn’t get a big bump in their second year of Standard legality, and fetches will be in this format for six months less.

Foil fetches, though…that might be a different story. I don’t mind admitting it: I am going to trade for as many foil fetchlands as I can. I’ve gotten to a point where I’m content to wait on adding a card to an EDH deck until I get the foil version. Foil fetches, especially these, where the foils have two styles (Onslaught and Judge) and both are over $300, will represent a way for foil-hungry players to get what they want at a decent price.

When you have a foil fetchland available for trade, and you meet someone who wants it for their pimped-out deck, they will be ravenous for it. Feed their need.

Between Temples and Confluence and all sorts of things, I think that playing this on turn four is not unreasonable. Having a creature around to give it haste is just ridiculous. I think there’s a lot of potential here, at not a lot of risk. Bloodsoaked Champion is indeed the combo it appears to be, giving haste at first, and later on, allowing for vigilance or lifelink as needed.

This is going to be a sought-after Game Day Promo. It’s a very good card, useful in just about any situation, and this plus Hero’s Downfall and Thoughtseize is a strong pull for BW being a starting point for decks.

I’m going to trying very hard for the full-art versions, I’ll be somewhat into regular foils, and if the regulars get to $1 or less (remember: best-selling set ever!) then I’ll be eagerly on that too.

Join me next week as I take you through some things I really want to get now that they are out of Standard.