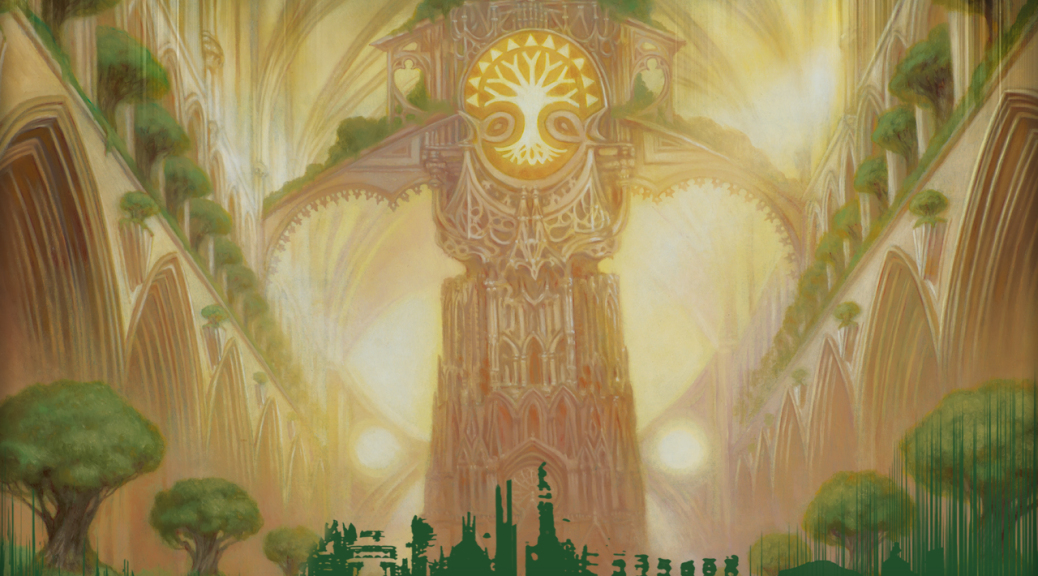 What does a person who bought Bitcoins in October 2011 have in common with a person who bought a playset of every Zendikar fetchland during the same time? They both took a nice long ride on the Treasure Cruise. Well, one has probably made quite a significant sum of money while the other just bought himself into Modern at a fraction of the price a 2014 entree. Ah, the perks of being an early adopter.

In retrospect, the rise and rise of the fetches seemed fairly obvious. They comprise the key components of the Modern manabase. However, back in October 2011, the idea of the freshly-rotated Scalding Tarn costing more than $50 apiece sounds far-fetched. Modern is but a fledgling format and its debut Pro Tour infested with turn three combo decks left many skeptical about the format’s future.

Wizard’s subsequent laissez-faire bannings did little to instill confidence in the format; the concern that your favorite archetype might be axed in the next round of bannings is legit, albeit overblown (you didn’t really lose any money investing in Jund components prior to Bloodbraid Elf getting quashed by the banhammer).

Nevertheless, Modern thrived as a format and is today cited as a favorite format by many players – casuals, amateurs and pros alike. It boasts a healthy and diverse metagame, and there is enough room for a wide array of tier one decks which rotate around with the flux of the metagame. A little bit like Legacy really. And some Modern decks now costs nearly as much as Legacy decks too. A little price to pay for Modern’s explosive popularity.

Shocklands have been widely discussed as an October 2014 rotation pick up long before their rotation. Nobody want to miss the ship on shocks. Is now the best time to complete your playset of every shockland? The answer is an astounding ‘Yes!’

However the question runs deeper if you are interested in shocklands as an investment; is it worth investing in a few extra playsets of shocklands? Could shocks appreciate enough to warrant parking money in them long-term? What is the risk of a reprint repressing shockland prices?

Today’s article will discuss those questions and dissect the pros and risks associated with going long on shocks.

Are Steam Vents the Next Scalding Tarns?

A chief regret of many long-time players I know is liquidating their fetchlands when Zendikar rotated out back in October 2011. Or not getting their hands on $15 Scalding Tarns back in early 2012.

Shocklands are in the same situation as fetches were in back in October 2011. While I suspect many players would have wisen up and hold on to their shocklands, there are still plenty of opportunities to get shocks. As of writing, shocklands can be acquired for less than $10 apiece, except for Sacred Foundry and Breeding Pool. With no new supply of shocklands, they are unlikely to go any lower.

Data from both offline and online Modern tournaments in 20141 show four shocklands in the top twenty list of most ubiquitous cards in Modern. Note that I used the term ‘ubiquitous’ as opposed to ‘most played’ as the list ranks the cards based on the percentage of decks that run them. Steam Vents is the third most ubiquitous card in Modern, found in a whooping 34.8% of Modern decks this year, with only one other land being more ubiquitous, that is Misty Rainforest which occupies the top spot in the list.

Stomping Ground comes close, placing sixth on the list, seeing play in nearly one third of Modern decks this year, while Overgrown Tomb and Temple Garden stood at thirteenth and sixteenth respectively.

However, it is unlikely that shocklands will attain the stratospheric heights of the fetches for a few reasons. First, more copies of fetches are played compared with shocks in decks that run them. The most ubiquitous fetchland, Misty Rainforest is played an average of 3.1 copies in decks that run it, while the second most ubiquitous fetch, Verdant Catacombs is played a whooping 3.8 copies in decks that run it. The lowest ranking fetch in the top twenty list, Marsh Flats, is ran on average 2.5 copies. Compared with the fetchlands, the most ubiquitous shockland, Steam Vents, is the only shock that averaged more than two copies (2.8) while the remaining shocks on the list averaged less than two.

Shocklands are only played in Modern, while fetches see play in virtually every format it is legal in. Lastly, Return to Ravnica significantly ramped up the number of shocks available in the market. I might be wrong as many once thought it impossible for Scalding Tarns to hit $50, but it went all the way to $90 before petering down to its current $50, but taking into account these factors, it looks unlikely.

Nevertheless, that does not imply that shocklands any less good a long-term investment.

Pros of Going Long on Shocklands

Modern is here to stay and is a thriving format. Modern’s existence will ensure that shocks will always be in demand. Return to Ravnica will fade away further and further into the recesses of our memory and the number of shocklands in the market will remain static while demand for shocklands increase.

Modern Masters 2 is hinted to come out mid-2015. That weekend of May 30th-31st with three simultaneous Grand Prix (format yet unannounced) being held across three different continents reeks of an epic release of a highly-anticipated product (it would be the first time Wizards is running three Grand Prix on a single weekend). Regardless of whether it will be released during that weekend, the eventual coming of Modern Masters 2 would pull in another wave of players into Modern similar to what Modern Masters did last year. And new Modern players will need their shocks.

Shocklands are vastly underpriced right now. This could be attributed to the lull in Modern prices due to the format no longer being an essential ‘PTQ format’ and the fact that Khans Standard is hogging the limelight now. The Modern Pro Tour in February 2015 could bring about a price correction.

But shocks were $20 – $25 back prior to the announcement of Return to Ravnica, surely with the huge influx of supply they would not be able to return to those prices?

There was a large number of shocklands pumped into the market, but the Modern player base has exploded in recent years. Modern is a Pro Tour format and Wizards is pushing it to become the de facto competitive format for players interested in a non-rotating format. Nine out of the fifty-four Grand Prix slated for next year are Modern. We are seeing Modern Grand Prix in places where non-rotating formats were traditionally unpopular like South East Asia. Modern is also gaining more traction in the StarCityGames circuit.

Risk of Going Long on Shocklands

The other edge of the blade in Wizard’s dedication to support Modern is the risk of reprints repressing the price of shocklands.

The risk of shocklands getting reprinted within the next few years are slim, due to their unique flavor. Wizards would be hard-pressed to fit names like “Breeding Pool”, “Steam Vents” and “Hallowed Fountain” in sets outside of Ravnica. The Onslaught fetches have more generic names which could allude to any sort landscapes, hence their reprint in Khans of Tarkir, but the name of the Ravnica shocks are associated with the flavor of their respective guilds.

Core sets are traditionally where cycles of lands get reprinted, but with the core set being discontinued after Magic 2016 (released in July 2015), the chances of shocklands being reprinted within the next few years are even less pronounced.

It is also unheard of for Wizards to reprint whole cycle of lands in supplemental products. They could shatter this trend by reprinting shocks in a Modern Master-style product, but that entails sacrificing ten rare slots and I doubt their ‘devign’ team would suffer that.

With a minute chance of impending reprint within the next few years, the risk with going long on shocks is pretty low.

Supreme Verdict, a.k.a. Is it a Good Investment?

Demand grows exponentially, catalysed by events like the release of Modern Masters. Is it unrealistic to expect a shockland to fetch at least $20 price tag sometime in the future of Modern’s growth curve? Rather, I think the question is ‘when’. Even $20, which is a 100% return on most shocks, is a conservative prediction. The blue-pedigree shocks like Steam Vents and Breeding Pool might not even struggle to hit $25 – $30 especially when they are played in multiple copies across tier one decks.

The best shocklands to invest into right now is the underpriced Steam Vents. It is currently the most played shock in Modern, and although its paper price does not reflect that, Magic Online Steam Vents are already the most expensive of the shocks, nearly double the price of the cheapest shocks. Tier one mainstays like Splinter Twin, Scapeshift, Kiki Pod, Jeskai Control, Jeskai Tempo and the newly-elevated UR Delver all run Steam Vents, so it comes as no surprise that Steam Vents are the most expensive online.

Hallowed Fountain is currently one of the cheaper shocklands, the only shock with a fair trade price below $8, but it has the potential to be ranked amongst the most popular fetches. The introduction of Flooded Strand and Polluted Delta, plus powerful card selection like Dig Through Time and Treasure Cruise into Modern might be the tipping point to push UW or Esper Control into the hallowed halls of tier one archetypes. Indeed, UW Flash Control is already make a pretty decent showing on Magic Online’s Modern Daily Events. Hallowed Fountain might be a good choice of shock to pick up too.

While the other shocks are equally good holds, their price ceiling could potentially be lower. I use the term ‘price ceiling’ with trepidation when I am referring to Modern staples as they continuously defy expectations.

The treasure cruise is sailing fast for foil shocklands. Back in April this year, foil Return to Ravnica versions of most shocklands could be obtained for around $25 per copy. Today you’d be hard-pressed to find the foil copies of the popular shocks for under $45 and the less popular ones for $35.

Shocklands are the archetypical slow-growing, but secure long-term investment vehicle. Being a fuel that most Modern decks run on, the demand for shocklands will not only be perpetual, it will likely increase in the year to come. Shocklands are underpriced right now, it would be wise to get on the boat right now, and if you are short on funds to invest, pick up Steam Vents.

Guo Heng grew up playing Magic and is currently a competitive player in Malaysia. His foray into Magic finance started out when he realized that buying extra playsets of undervalued cards help pays for his Magic habit. Rather than hunting big games, Guo Heng enjoys hunting undervalued games instead. Catch him @theguoheng and www.facebook.com/guoheng