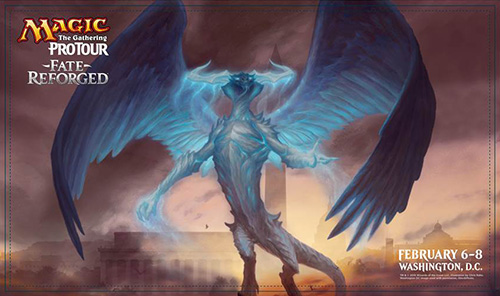 Stay tuned for round by round MTGFinance coverage of Pro Tour: Fate Reforged!

A Wild Defiance foils buyout is going down as a result of the card appearing in Infect decks from Team Pantheon. Card may settle in the $6+ range, but the deck needs to Top 8 to maintain the price mid-term.

Lingering Souls being called out as a good speed bump against Infect.

Karsten goes to 7-1 with a traditional Affinity Build.

Each of Infect, Affinity and Burn have a player at 7-0.

Whoa! Mihara is running one of my top underated cards of Fate Reforge, with multiple copies of Humble Defector in his innovative deck list.

Marco Lombardi is 6-0 with Merfolk.

Yamamato takes the match, finishing Shuhei off with Siege Rhino, a card that continues to earn it’s keep in the format.

Lingering Souls has seen multiple release at uncommon, but the only mainstream foil release was the original, and those have been sitting at half their peak value for a while without a home in modern. Today, the card is all over the place, and should easily regain $10+.

3:56pm Frank Karsten and Affinity build being featured in the metagame overview with BDM.

Restoration Angel and Blade Splicer getting some camera time in the Maguire deck. A wild top Splinter Twin top deck gets spoiled by Wear/Tear.

3:09: Rnd 5 Patrick Chapin just played a Gurmag Angler and protected it with a Stubborn Denial…in Modern!!! (bowing respectfully to the master despite his losing to Affinity.)

Cifka deck noteable for running Bitterblossom & Intangible Virtue (keep an eye on foils, but remember the card has been reprinted multiple times). Sorin, Solemn Visitor in the Cifka deck, over the older version.

2:52pm: Eidolon of the Great Revel being discussed in the burn deck tech. This card is still too low around $6 and should break $10 this year for sure, especially if Burn does well this weekend.

Just snapped up some copies of Chord of Calling around $3, promo Tasigurs around $20 and whatever Ghostways I could find overseas under $10, which wasn’t many. M15 foils currently have a 4x foil multiplier so I’m staying away for now.

Sam Black showed off a very sexy Naya Ghostway based deck earlier this week on StarCityGames.com. See it here. Rumor has it that a few pros are actually running the deck, and Ghostway has already been bought out into the $16+ range, with minimal copies remaining online. This was a sub-$8 card last week.

1:59pm: The guys predict the following archtypes as defining the metagame:

1:49pm: Rich Hagon and Randy Beuhler counting down the 10 most important cards in Modern:

Notable that Siege Rhino has gone from being “unplayable” in Modern a few months back to a #2 ranked staple based on it’s role in Junk decks!

And so begins our only Modern format Pro Tour of 2015, and a defining signal for Modern hype leading up to the release of Modern Masters (2015 Edition) at the end of May via Grand Prix Las Vegas and two other mirrored tournaments in Europe and Asia.

Far from abandoning the format, WOTC seems as committed as ever to ensuring we all have a powerful, yet diverse evergreen format to cling to, with many rewards for deck builders who find innovative ways to address the metagame.

Love ’em or hate ’em, the recent banning of Treasure Cruise, Dig Through Time and Birthing Pod has put the usual meta on tilt. MTGO lists have been awash with creative deck lists since the new rules took effect last week and while there may still be a very good chance that stalwarts like Junk, Jeskai/Geist or U/R Storm will be hanging out in the top 16, all signs point to a rogue deck or two storming the castle this weekend in Washington, D.C.

As per usual, the Pro Tour weekends now feature a mix of booster draft (FRF-KTK-KTK) and constructed (Modern) formats with 3 rounds of draft Friday morning, followed by 5 rounds of Modern starting around Noon EST.

The big teams such as ChannelFireball, SCG, and the various Japanese powerhouse squads have been relatively quiet all week, as their best deck ideas hide out in stealth mode, waiting to be unleashed on a hopefully unsuspecting field and scoop up the $40,000 top prize.

For we MTGFinance speculators, the weekend will be an especially important proving grounds for many of the most hyped cards of the format. Here are some early stories worth paying attention to:

At first, many doubted whether this Standard stalwart could make the jump into a format as powerful as Modern. Then they said he couldn’t survive the banning of Birthing Pod. And yet, just a few weeks later, a quick look at the MTGO results shows that Junk lists running the full 4 copies of this swingy beast are all over the place. Whether some version of GBx can take down the tourney is anyone’s guess, but foil Siege Rhino’s are still looking like a buy to me anywhere under $20, perhaps with a target to out around $30 within the year on continued strong results. Given how quickly Abrupt Decay foils broke $80, there seems to be upside on Rhino despite the lack of Legacy play.

It’s hard to believe, but the metagame may still be too unfriendly for this powerhouse card drawing engine to regain lost ground in the Modern meta. With a clear shift from Jund to Junk heading into the tournament, many lists that could run Bob, simply are not. If he doesn’t see play in the Top 16, we should be ready for a shave of $5-10 off his price at least, though the price memory is definitely strong with this sith lord of value.

We were picking up copies around $12.50 not so many months ago, but this highly aggressive legend has no staged a comeback just above $20 and could be poised to head back towards the $30+ range if a Jeskai Aggro or Control build finds a seat at the top tables this weekend. The card’s power is hardly in debate, but matchup luck will almost certainly play a role here as the card doesn’t like facing down blockers.

In a world with Treasure Cruise and Dig Through Time dominating graveyard resources, Snappy had to take a back seat last season, but with the competition taking a dirt nap, there is a very good chance that a strong showing by Esper or Jeskai Control/Mid-Range builds could start a climb into the $50 range by summer. Free from a possible MM2 reprinting due to the exclusion of Innistrad block from the set, Tiago should be good to run the chart until MM3 roles around in 2017 or so.

Paul Cheon: What a story!

Was anyone not on the edge of their seats last weekend watching Paul Cheon face Paul Reitzel at the finals of the team event at Grand Prix San Jose? Paul, the perennial kid brother of the Channel Fireball crew, has been busting his ass at the pro magic game all year, but desperately needed no less than a win at the GP to qualify for the Pro Tour. Demonstrating poise, focus and determination, Empty the Cheons played one of the best matches of the year on camera to earn his shot at the big show. Good luck Paul!

Travis has some great additional ideas on cards to watch over here, so take a look!