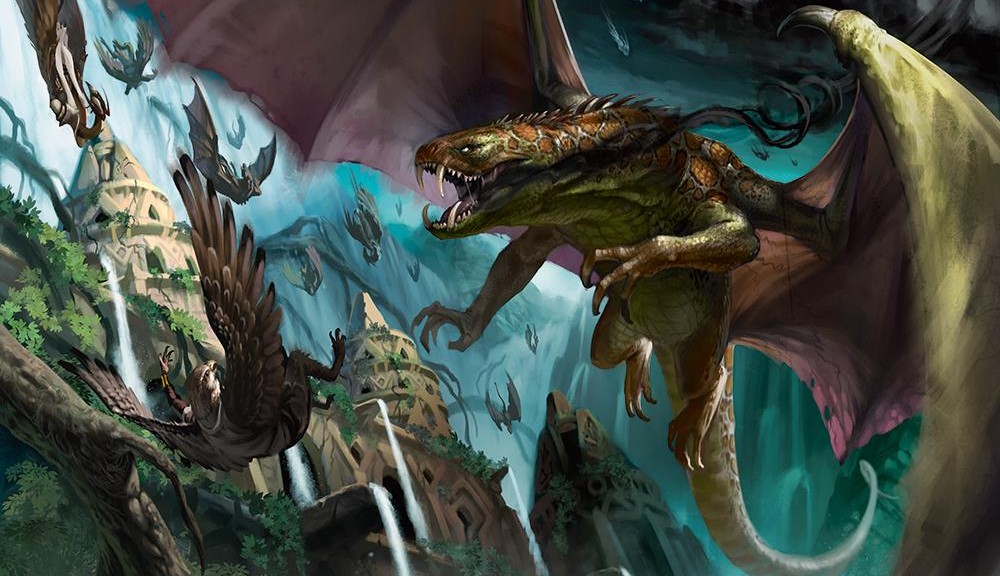 We’ve gotten plenty of spoilers so far, so let’s take a look at what the new set is going to offer us for Standard and beyond.

What is this, Yu-Gi-Oh? Come on Wizards, we knew what would happen when you put that on cards. It would be the first thing that popped into those Yugioh players’ heads that you’re trying to convert to Magic. Clever, very clever.

Besides the Yugioh conversion implications, the name unfortunately does not live up to the hype when crossed over to the Magic world. The only difference between Morph and Megamorph is that it places a +1/+1 counter on the creature when you turn it face up. That’s it. Not double its power, double its toughness, give it some crazy new ability that we haven’t seen before… Nope, we’re just going back to old reliable (+1/+1 counters) in order to “balance limited”. Look, I’m not bashing the mechanic here – I actually think it is brilliant in it’s simplicity and flows well with the tie-in to the other sets of the block. But did you have to waste such an awesome name like Megamorph on something that only marginally changes the game at best? Let’s look at two of the better Megamorphs that we’ve seen so far to show some examples. 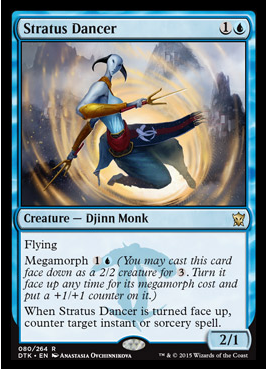 Among the first Megamorphs revealed, Stratus Dancer is not something I would imagine as being “very large”, “huge”, or “extremely” morphed. Many of the cards with Megamorph are similarly underwhelming from a flavor standpoint. Looking through some of the first revealed commons and uncommons will show this.

Now financially speaking, Dancer itself has price breakout potential. I’m sure most of you reading this remember when Mono-Blue Devotion was one of the top decks in Standard. The card is quite an efficient beater and will perform exceptionally well in blue aggro decks. Outside of Tidehollow Strix, this is the best standalone 2/1 flyer for 1U (or UB) that Wizards has ever printed. And it has an upside! If you draw it late in the game and already have some flyers to get in and hit your opponent, you can play it as a Morph creature and then have a counter backup for any board wipes, or other nasty instants or sorceries, that your opponent throws at your dudes.

I don’t think we’re going to see a mono-colored blue aggro deck in Wedge Khans Standard, but stranger things happened and right now I can’t rule it out completely. Losing Nykthos hurts later when Theros rotates yet until then it could see a resurgence due to cards like Shorecrasher Elemental. Luckily, the card costs 1U and not UU which doesn’t rule it out from U/X or X/u Aggro decks in Standard. If a blue (or even blue splash) aggro deck does break out and this card appears as a playset in it, the price has a good chance of spiking short term. Stratus Dancer will be one of the Megamorph cards I’ll be watching. 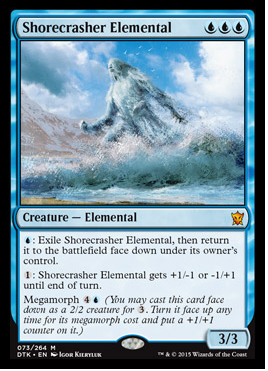 Speaking of Megamorph, Shorecrasher Elemental seems pretty good in the Nykthos devotion blue I mentioned. Master of Waves is looking great to me right now to work along with Shorecrasher, and not just for Standard. The Modern applications of this card are also pretty interesting. It can dodge the spot removal in the format pretty easily and can buff itself up to block Siege Rhino’s if necessary. Playing one or two Shorcrashers in Modern Merfolk could help bolster the power of the deck.

A more aptly named mechanic, Exploit allows you to do something powerful when a creature enters the battlefield by sacrificing a creature (even the creature with the Exploit mechanic). The marquee card spoiled with Exploit was Sidisi, Undead Vizier. 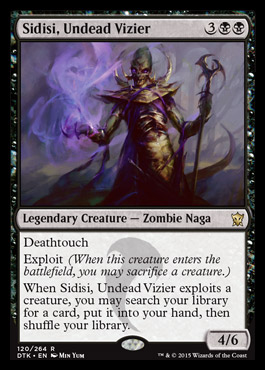 This card seems decent to me. It should have a home in Standard, as a one or two of in Sidisi-Whip or a new archetype that spawns based on Dragons, in order to make the most of Exploit by sacrificing a token or other creature like Satyr Wayfinder in order to Demonic Tutor for whatever you need at the moment. At worst, it is a five mana Demonic Tutor. Not awful but not that great either. I’m going to wait for more cards to roll in from Dragons before making a final judgment. Suffice to say, not worth pre-ordering at $5 a copy. 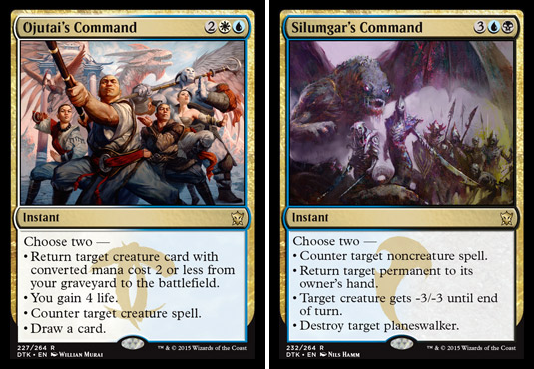 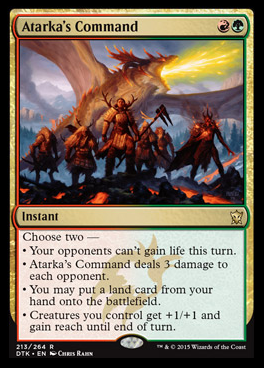 At least the blue commands were revealed first, as everyone would be left wondering if there would be a command printed to rival the power of Cryptic Command in Modern. Unfortunately, Ojutai’s Command was so close but contained the word “creature” as Saffron Olive pointed out. If Ojutai’s Command could counter any spell, then we could be talking about a potentially game changing Command. As it stands, yes it is still quite powerful yet it will not have the impact in Modern that everyone was hoping for. In terms of Standard, the card is quite good though we’ll have to wait and see where it is played. Something to keep in mind is that it is also the buy-a-box promo, which usually means that Wizards thinks it will see plenty of Standard play.

Silumgar’s Command costs five mana, which is a letdown. That is a huge difference in formats like Modern and will prevent the card from being played as a playset in decks in Standard. However, Silumgar’s Command is powerful for what it does. Its modes can allow you to handle almost any board state in addition to being able to counter key noncreature spells. I like it, though again I feel that its price is limited due to the fact that it costs five and will not be played extensively across all decks.

Atarka’s Command feels Modern playable to me. Burn decks already splash green for sideboard hate like Ancient Grudge and Nature’s Claim, so having another version of Skullcrack opens up more options for them. The other two modes for Burn don’t seem that great but we have to keep in mind that this command only costs two mana – definitely the cheapest command we’ve ever seen. I will be watching Atarka’s Command very closely to see where it goes. 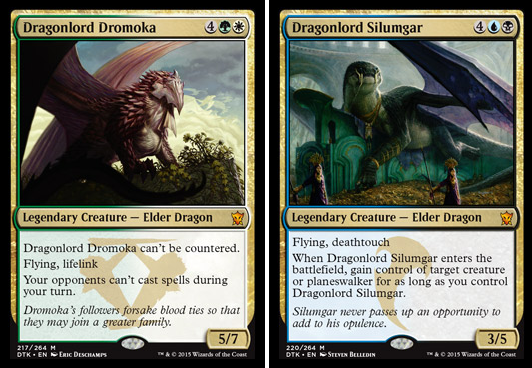 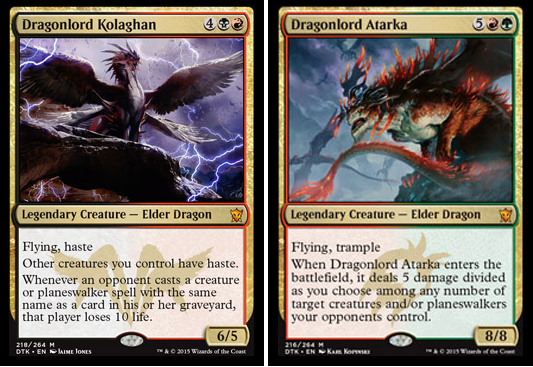 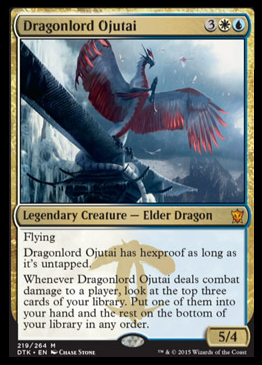 The Elder Dragons in the set are all good in their own way, though I believe that Silumgar has the highest chance of seeing Standard play due to his Sower of Temptation ability of taking a creature or planeswalker from your opponent. Dromaka, Kolaghan, Atarka, and Ojutai are definitely casual hits but their effects aren’t quite as great as Silumgar in constructed.

Atarka would be my next guess at a constructed playable card, as it has an immediate impact on the game state by Bogardan Hellkite-ing the field. In addition, Atarka could also be played before turn seven due to the ramping nature of green. Though I hate to underrate Kolaghan, six mana is a ton for a finisher. Stormbreath and other cheaper dragons with haste seem much better suited as options. Lastly, Dromoka and Ojutai seem the least favorable to me from a Standard perspective. They are powerful yet don’t have an immediate impact on the board. 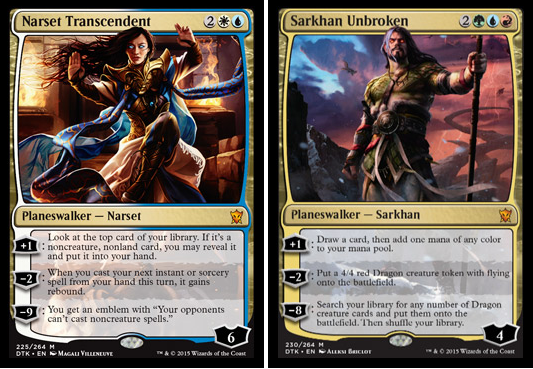 Sarkhan Unbroken has been the most exciting planeswalker reveal. Shown on Friday at PAX East, the crowd oohed and awed in anticipation of seeing the card. They clapped and clamored profusely as each ability was revealed. As the final, ultimate ability of Sarkhan was finally revealed there was a roar from the crowd and thunderous applause for several seconds afterwards. I can say that this reception was justified.

The foil prices on Sarkhan are going to be absurd. Yes, he is going into every five color dragons Commander deck out there. Yes, he is also good in Standard and will be played in Temur decks for the foreseeable future. Yes, even the non-foils will be driven higher in price by the demand that casual players will place on the walker in addition to the tournament demand he will see. My advice though is just hold on for a little while and let the preorder honeymoon prices dwindle. You wouldn’t want to pay too much for Sarkhan, would you?

Narset Transcendent, while not receiving the type of fanfare that Sarkhan received, is still an awesome planeswalker in her own right. She is the control planeswalker that control decks have been wishing for all this time. She is to control as Domri was to aggro. Yes, she costs one more mana but for control decks it will be totally worth it. Again, like Sarkhan wait for the initial hype to die down, and then pick up copies.

I can see Narset being played in U/W/r Jeskai in Modern, or even Legacy if she proves powerful enough over the coming months. Control can more easily stack the top of their deck in these formats and her +1 ability is powerful alongside cards like Serum Visions or Brainstorm. Also, imagine rebounding Lightning Helix, Path to Exlie, Swords to Plowshares, Lightning Bolt, Brainstorm, etc. Seems like a ton of card advantage to me.

As the previews keep rolling out for Dragons of Tarkir, I will continue to keep my eye on any further cards that add or detract from the previews that have been revealed so far. There have been lots of great cards spoiled and the set release is getting my very excited for the end of March! Which cards have you been anticipating from the new set?