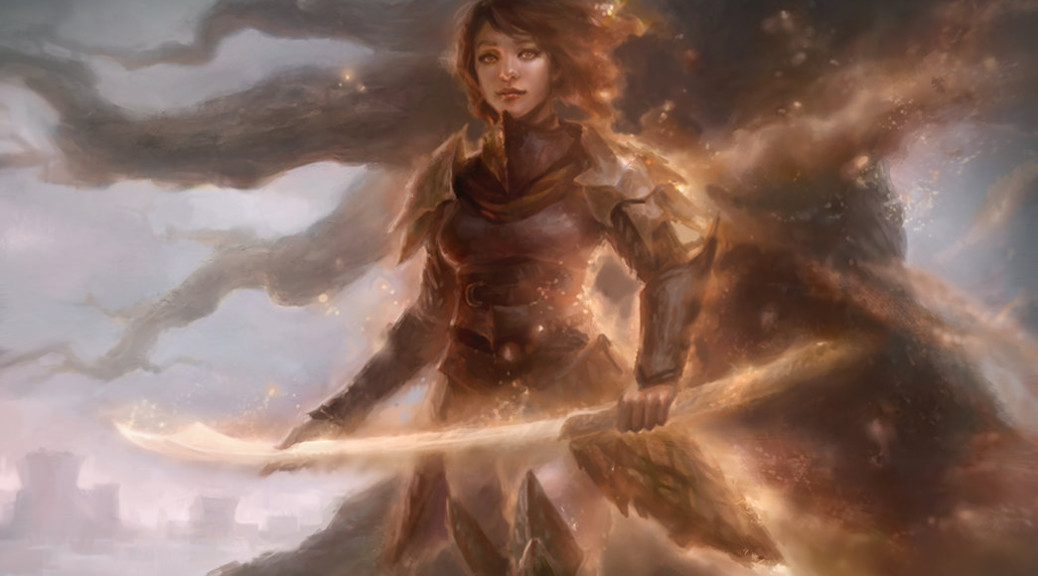 It’s review time in the Magic writing community as Dragons of Tarkir is a few days from being released. I hope you all have had a fun (and hopefully awesome prerelease weekeend) and if any of you had the good fortune to open a Narset Transcendent during your prerelease and is wondering what to do with it, you can check out the piece I wrote a few days back about the cards I would trade an overpriced Narset Transcendent into.

If you are looking for a set review, Travis Allen wrote an epic 7,000-word financial review of the rares and mythics last week. Jared Yost sifted through the commons and uncommons for financial value yesterday. And of course, Brainstorm Brewery did their customary review in their latest episode (which you can get access to before the general public if you are a MTGPrice ProTrader).

Even if you are not interested in Tiny Leaders, you may want to read on as Tiny Leaders demand has and will be driving up the price of cards, especially foils. 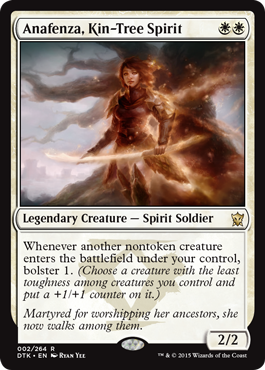 The new Anafenza  is the Dragons of Tarkir card I am most excited about for Tiny Leaders. I am of opinion that Anafenza, Kin-Tree Spirit is one of those cards that could create a snowball effect if she stays on the board for a few turns.

Creature-based strategies are the most common strategy in Tiny Leaders, as control and combo are neutered by the three casting cost and singleton restriction (combo and control still exist, they just do not occupy as large a niche as they do in other eternal formats) and Anafenza 2.0 fits just about into any creature decks that could run her.

Can you imagine Anafenza’s Bolster trigger being abused with Alesha, Who Smiles at Death‘s creature recursion? You can expect to get multiple Bolster triggers every turn in Alesha decks. Not to mention as Alesha’s ability triggers when she attacks, you could Bolster your Alesha to increase her odds of smiling at death during combat (bolstered by Anafenza 2.0, Alesha could finally defeat Anafenza 1.0 in combat).

Anax and Cymede swarm builds are another home for Anafenza, Kin-Tree Spirit. The quality of your one and two drops increase significantly if they all come with an enter-the-battlefield Bolster trigger. Indeed, Anafenza should be an auto-include in any swarm decks running white.

I am excited because Melira, Sylvok Outcast has always been the weakest link in the combo. All the other combo pieces are solid value cards by themselves and are cards I’d be happy to play outside the combo. Melira would have been a waste of deck slot had she not been an integral component of the combo. I’ve accepted the fact that I risk having a dead card in my hand sometimes for the privilege of running an infinite combo in my midrange deck.

Anafenza, Kin-Tree Spirit changed it all. Even if I am not running the infinite combo, I would play Anafenza in my Anafenza deck (Anafenzaception). Why?

I would not be surprised to see Anafenza, Kin-Tree Spirit spawn a new archetype in Tiny Leaders. A white weenie swarm deck with Crusade and Spear of Heliod looks to be a good shell for Anafenza 2.0. Swarm strategies are a strong route to take in Tiny Leaders due to the lack of board wipes.

Financially, I would not be getting Anafenza, Kin-Tree Spirit foils right away as foils would likely drop in price during her time in Standard.

$2.66 for non-foil copies is a decent price to buy Anafenza 2.0 if and only if you want to run her in your deck.

First and foremost, there are not many warrior creatures in decks that run white. Arashin Foremost is no Silverblade Paladin.

Gleam of Authority could potentially find a home in either Anafenza decks to create an insanely huge creature. However, you are pitted against some of the best removals in Magic and enchanting a non-Hexproof creature is just setting yourself up for getting two-for-oned.

There are no dragons to slay in Tiny Leaders. Hidden Dragonslayer may be a sideboard card for white swarm decks to deal with Anafenza, the Foremost decks. I am not counting on that to bolster Hidden Dragonslayer’s financial value.

Again, you would be facing some of the most efficient removals ever printed in the history of Magic. I do not want to sink effort and mana into growing a card that could be plowed. 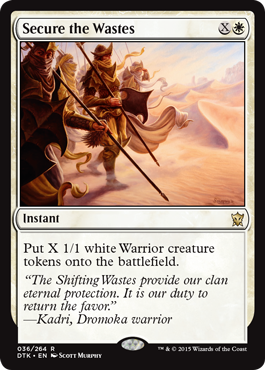 I would keep an eye on the foils when they drop in price from their current extortionate $12. 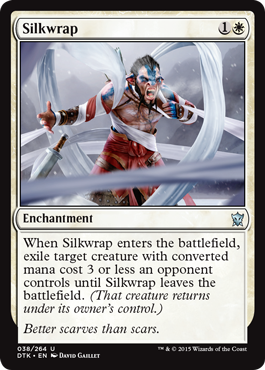 I don’t usually review uncommons, but you’re telling me that white now have a Smother? Foils are the way to go with Silkwrap as the margin for non-foils is way too small for a long-term spec. To compare, foil Worldwake Smother spiked from under $1 to nearly $6 in January this year when Tiny Leaders exploded in popularity. Smother is not played in any other formats, so it could be safely assumed that

Foil Silkwrap is currently $1.50, which is not bad if you want a copy for your Tiny Leaders deck. But I would wait until foils drop to below $1 to buy my specs. Or trade for them. 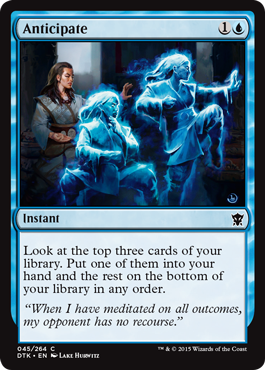 I am going to briefly talk about Anticipate as it one of the most playable blue card in the set and there were talks of the card being potentially played in Modern as a Telling Time that digs one deeper.

I do not anticipate Anticipate seeing much play beyond the few blue-based combo (Ambassador Laquatus and Nin, the Pain Artist pop into my mind) decks in Tiny Leaders that really needs to dig for combo pieces. And if they have a slot. Unlike Modern, Tiny Leaders have access to real blue cantrips like Ponder and Preordain.

If there are any drivers for the price of foil Anticipate, it would be because Scapeshift replaced Telling Time with Anticipate.

You risk getting mocked by your opponents if you run Mirror Mockery.There are currently only three blue-based leaders that want to attack with creatures – Geist of Saint Traft, Sygg, River Cutthroat and Shu Yun, the Silent Tempest – and Mirror Mockery fits in neither.

Shorecrasher Elemental has potential in other formats but would be stranded like a beached whale in Tiny Leaders. 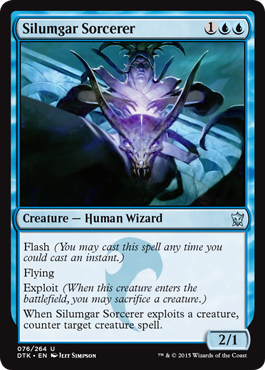 My initial assessment  of Silumgar Sorcerer in regards to Tiny Leaders play was one of excited anticipation. I mean its a counterspell on an evasive body that could be played at instant speed. Four abilities on a three casting cost creature! So much value and tempo.

After giving it some thought I’ve decided that Silumgar Sorcerer may not be that good in Tiny Leaders after all. The problem lies with finding a home for it. Decks that run blue and cares about tempo (again, Geist, Sygg and Shu Yun) are not exactly full of exploit targets and who else would Silumgar Sorcerer exploit but him/herself.

The only decent exploit targets that would net you value that I can think of are a Stoneforge Mystic that has ran her course or an exhausted Snapcaster Mage. The only token generator in those decks would be Monastery Mentor in Shu Yun.

Her abilities are good, but their cost is too prohibitive for a format that is dubbed singleton Legacy.

Dragons of Tarkir brought some nifty white cards into Tiny Leaders and I am keen to see how they would impact the build of current tier one decks. Blue was a bit meh unfortunately.

However, my biggest disappointment was that there were no tiny dragons. Being the Vorthos that I am, I was wistfully hoping for a dragon leader or something of that sorts.  Alas Mark Rosewater dashed any hope of seeing tiny dragons when he mentioned that there weren’t any baby dragons for them to make as the dragons of Tarkir were born out of dragon tempests.

Part of me wondered why would they opt for dragon tempests rather than baby dragons which would have been a hit among Vorthoses and casuals.

Cardboard Crack has a great answer.

That’s all for today. I have something else in mind for next week (hint: it’s Commander-related) and I would get back to evaluating the remaining Dragons of Tarkir cards for Tiny Leaders playability after that. In the  mean time you can follow me on Twitter @theguoheng.