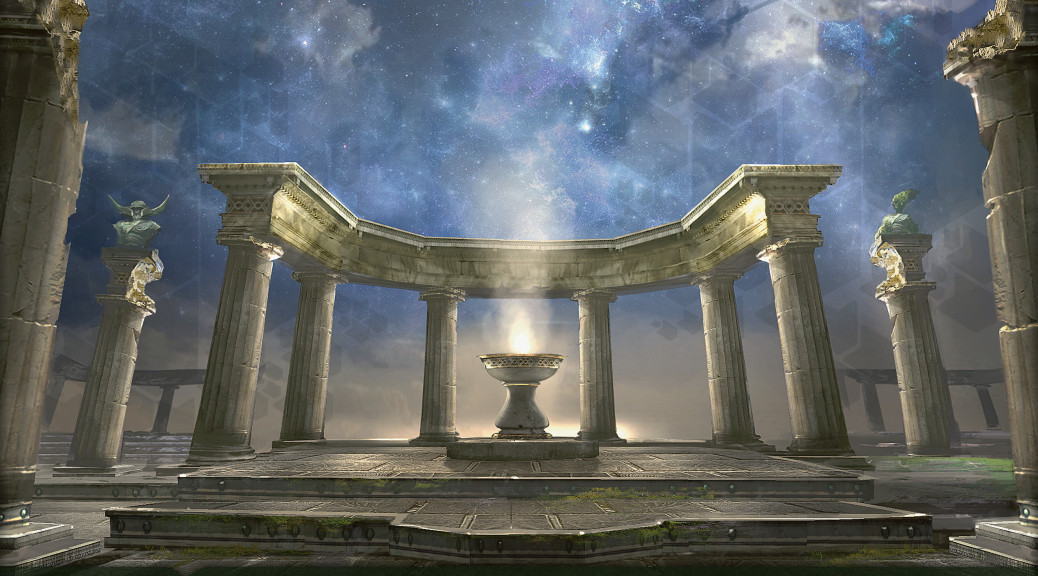 Removing tuck proved to be a controversial move, accompanied by some very vocal dissension on Twitter and Reddit. I would not dissect the implications of the change on the format in this article as I am not exactly the most qualified person to speak about it. Plus I am in favor of the no-tuck change, being a fan of build-around-me commanders. For those interested to read about the impact of the new ruling, I would highly recommend reading Jason Alt’s article on the change, one of the most impartial commentary on the removal of tuck.

The new ruling made me reevaluate a set of Standard-legal cards that are also Commander staples. What I am going to talk about today is a set of cards which I think would make a good long-term investment. A set of cards that, to paraphrase Mark Rosewater, were designed to be a wow factor in Theros boosters. Those cards have been getting a lot of love in Commander, and whose power level was bolstered with tuck removed from Commander.

The Theros block gods are ostentatiously impressive. They have flashy abilities, come in special Nyx-ified frames and are indestructible enhancements that become alive if your board state is sufficiently devoted to their cause. Sounds like a recipe for a long-term casual hit if you ask me. Also how cool is it to be able to play with gods?

Their abilities and indestructibility made some of the gods enticing commanders and a few, like Kruphix, God of the Horizons seemed to be designed with Commander in mind. The fact that the gods are enchantments unless their devotion is activated blanks a slew of commander removal. Together with indestructibility the gods are practically glued to the board once they resolve. Tucking used to be one of the few ways to remove a resolved god commander.

Would god become more popular as commanders in a post-tuck world? I do not know the answer, but one thing for certain, the gods are more resilient now and players can run build-around-me god commanders without worrying about their engine being tucked and having to play with a pile of garbage for the rest of the game.

As scoeri’s monthly Commander metagame sweep shows, the gods are already quite popular as Commanders.

Three of the Theros block gods are in the top 50 most played commander in the previous twelve months. Purphoros, God of the Forge and Erebos, God of the Dead used to be on the list as well, but they have been knocked off in recent updates.

Of course, the gods were not just popular as commanders. They were also played as one of the 99 and I believe they saw more play as one of the commanded rather than the commander. There are a lot to be written about them and rather than spill it all out in a single encyclopedia of an article, I would to split it into three parts.

In the first part today, we are going to take a look at the Theros gods and their long-term financial potential, with a focus on foils.

scoeri’s analysis offers a multitude of options for dissecting the popularity of Commander staples and one of them is a breakdown of the most played cards by set (only for recent sets). scoeri’s list is an invaluable resource for Commander aficionados and I would certainly recommend anyone engaged in or merely interested in the format to read it.

In the image above, we have the breakdown of the most popular Theros cards in Commander. Unsurprisingly, Burnished Hart and Prophet of Kruphix occupied the top two spot, one being a ramp spell that fits into any deck (whose foil is a good spec target) and the other being borderline bannable.

All five Theros gods are on the list, with three of them in the top ten, and Nylea, God of the Hunt and Heliod, the Unloved trailing at eleventh and twelfth respectively. They are the most popular Theros mythics in Commander.

Purphoros is also a Duel Commander staple. Marath, Will of the Wild and Prossh, Skyraider of Kher are top tier commanders in the format and Purphoros is a staple in both, although the Prossh Food Chain deck was killed by the recent Duel Commander banning of Food Chain. Nevertheless, Prossh Elfball is still legit and Prossh remains one of the top ten most played commander in multiplayer Commander.

More importantly in terms of financial prospect, Purphoros was one of the biggest benefactor of the new no-tuck legislation. Purphoros is a classic build-around-me commander. A Purphoros, God of the Tokens deck is pathetic without Purphoros himself. Five mana for four goblin tokens just would not do in a format where five mana nets you your opponent’s Kozilek, Butcher of Truth. Unless it comes together with a double Flame Rift‘s worth of commander damage. 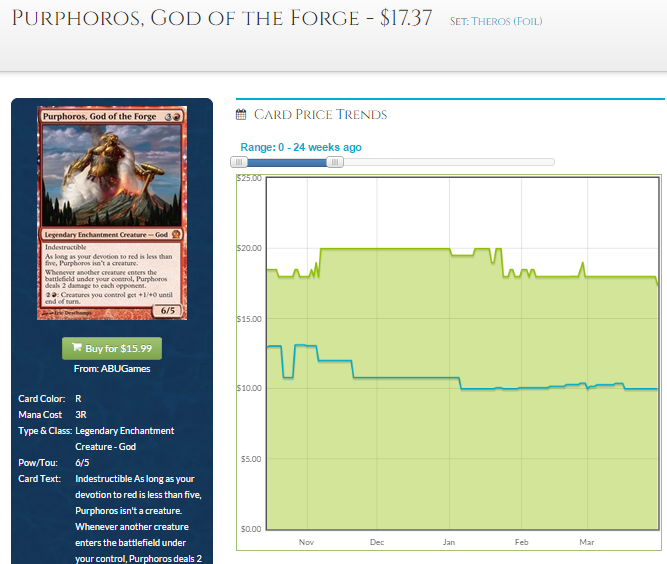 As of writing, a foil Purphoros is sitting at $17, a little on the expensive side. However, scoeri’s weighted 200 list which shows the percentage of decks that included a card when possible (e.g. how many decks running red included Purphoros) tells us that Purphoros enjoys a similar level of ubiquity as with another monocolored staple Doubling Season.

I am not advocating that you should go out and buy ten foil Purphoros right away. Foil Purphoros is a good trade target at the moment if you get the opportunity as Theros cards just started their downward spiral. Foil Purphoros may fall a little at rotation, but I doubt he would drop below $12.

As for non-foil copies currently sitting at $7, I would wait for rotation to buy in. Picking up a few at $3 to $4 looks like a no-brainer long-term investment. After all, Purphoros is the only god who made it into the top 200 weighted list.


Popularity do come at a price. Sheldon Menery noted in his article elaborating on the Commander Rules Committee’s decision to ban tuck that they are keeping an eye on Derevi and Purphoros, two commanders who became more powerful (or annoying, depending on which side of the table you are on) in a world without tuck. So don’t get too deep on foil Purphoros and if you do, keep a close tab on the general sentiment in the Commander scene regarding Purphoros.

Although we don’t like the idea of an official Watch List, it would be disingenuous of us to say that we don’t keep our eyes open for danger spots and/or cards that we know folks are talking about. – Sheldon Menery

She may have a tiny casting cost of three, but  Thassa, God of the Sea is no little mermaid. Ushering elementals  through blockers and fixing topdecks since Pro Tour Theros, Thassa recently experienced a bit of an uptick since Shorecrasher Elemental was spoiled, but the heralded revival of Mono-Blue devotion has yet to arrive.

Regardless of whether Mono-Blue makes a comeback, Thassa has found a home in Commander. She really is three cards in a single three casting cost card that could easily slot into any blue decks. She is an indestructible source of card advantage, a trump card in clogged board states, and a 5/5 creature when needs be.

Thassa may not be a popular commander but she is definitely a staple as one of the 99. Besides multiplayer Commander, she is a key component in Geist of Saint Traft Duel Commander and some Merfolk builds in Modern run her.

Thassa also has the benefit of being one of the three gods legal in Tiny Leaders. Thassa Merfolk may not be tier one, but it’s something! 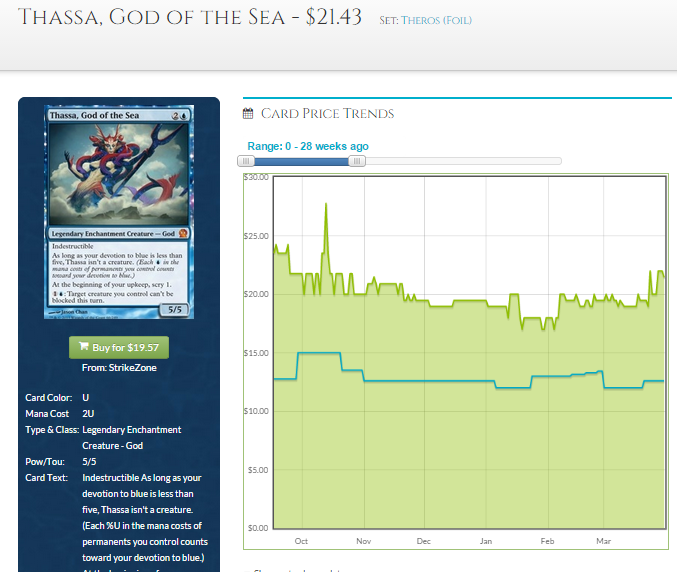 With normal copies at $8 and foils at $21, I would wait until summer or rotation to pick Thassa up. Thassa is one of the top 50 most played blue cards with Modern playability, is played in Duel Commander and is the leader for a fringe Tiny Leaders archetype. Thassa is definitely one of the Theros gods I am keeping an eye on as rotation enters the horizon. 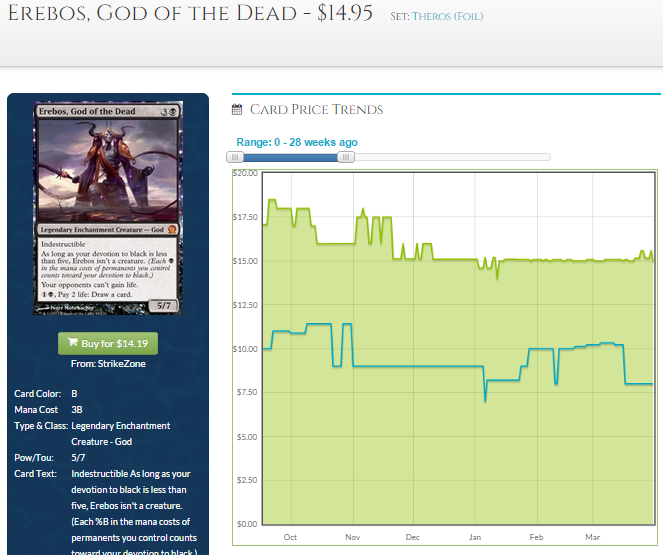 Erebos, God of the Dead is going for $5 non-foil and $15 foil. I would not mind trading into foils at the moment, but I would wait until summer or rotation to grab some non-foils. A pseudo-Phyrexian Arena on a stick that hoses lifegain shenanigans (aplenty in Commander) can’t be too bad. Erebos is also on the top 50 most played black cards list, right in the  middle.

Nylea, the Ugly Duckling of the Pantheon 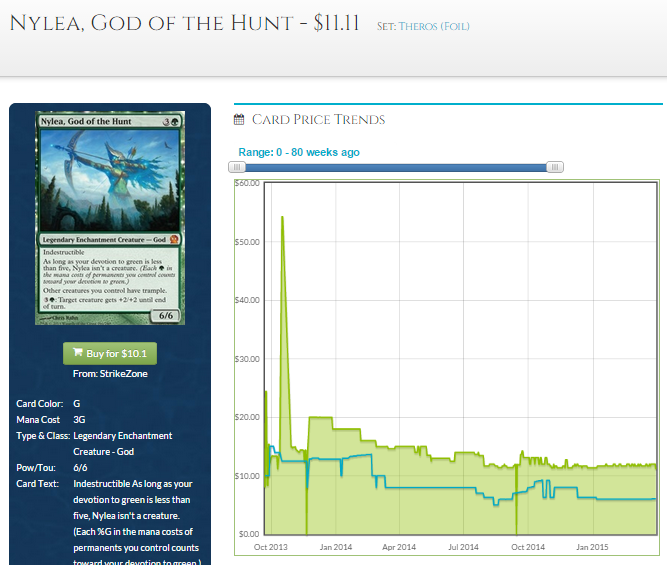 Nylea, God of the Hunt foils at $11 may be one step cheaper than the three discussed above. She is allegedly not as popular as the rest. Nylea is not even in the top 50 green list. I would stay away from both foils and non-foils ($5) for now. 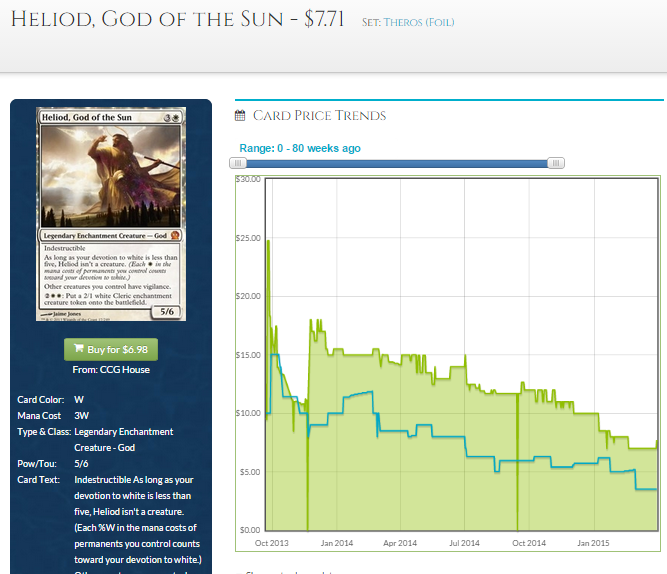 Heliod, God of the Sun is one of the most interesting god in terms of financial potential. Heliod is the cheapest among the Theros pantheon in foil ($8) and non-foil ($2.50) but he enjoys the same level of popularity as Erebos and Thassa in their respective color’s top 50 most played list (Purphoros was the only god to be in the top ten – fifth indeed – of the top 50 by color list).

I suspect Heliod may be severely underpriced due to the fact that he was the only Theros god who saw no play in Standard. $8 for foil Heliods looks good. $2.50 for a non-foil of a mythic that is a white staple in Commander? Hell yeah.

Besides their Commander appeal, one of the most enticing aspect about investing in gods is their extremely low chance of being reprinted. The gods are inexorably tied to the Theros plane in their flavor and their Nyx-ified frame adds a further restriction on where they could be reprinted. I cannot imagine seeing one of these in Modern Masters 201X a few years down the road. And I certainly could not envision visiting The Mothership one day to be greeted by ‘Announcing From the Vaults: Gods’.

Personally, I would focus on acquiring foils, because Commander staple foils turn into gold bars over time (the only recorded instance of successful alchemy), and because Nyx-ified cards look gorgeous in foil.

Foil gods are appealing picks when the price of Theros cards bottom out upon rotation. Most of the gods discussed today do not see modern play and that is a good thing. Look at the price of foil Keranos, God of the Storms who saw a little Modern and Legacy action, mostly from the sideboard.

scoeri’s statistics show that the Theros gods are Commander gold, and unlike Modern staples which do not dip in price upon rotation, Commander staples do see a drop upon rotation and would gradually appreciate over the years. Investing in foils provides extra buffer against reprints, which are getting increasingly frequent these days.

I have yet to set a date for the next part of this series, with next week being the week before the Pro Tour, and it is customary for Magic finance writers to throw their hats into the ring and bet on breakout cards. Comments are more than welcomed. Drop you thoughts below or find me on Twitter @theguoheng.

Edit: There are three gods legal in Tiny Leaders, not two, as a reader pointed out in the comments. Thanks ‘Annoying commenter’ (yes, that is his/her username. Check the comments below)! 😉

10 thoughts on “Gods Part I: The Theros Five”