Pro Tour Dragons of Tarkir has come and gone, and it has uncovered a lot of key information in the tapestry that is DTK Standard. I am assuming, of course, that this format (and all smaller, and therefore solvable, formats) is a game of Tipsy Tourney from Mario Party. 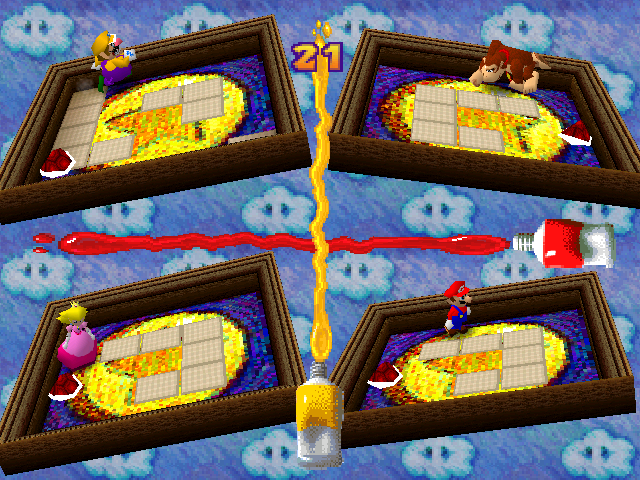 Some of the obvious winners were Dragonlord Atarka and Den Protector, while the two prospects I personally had the most vested interest in (Pitiless Horde and Dragonlord’s Prerogative) largely failed to deliver1.

Den Protector already appears to be sliding ever so slowly back down, and I suspect that its price coming out of the tournament last weekend is its ceiling for the remainder of its life in Standard. Den Protector is the type of card that is very good in terms of potential in-game value, it’s pretty good on rate, and it develops your board (which is why it may be “better” than Restock2). On the other hand, Den Protector is not likely a four-of in more aggressive environments, it is not likely to trade up at three mana (and even less so at five), and in a pinch can always be replaced with something else (nobody’s deck needs Den Protectors, in the sense that they need Nykthos to gain buku mana, or they need Mastery of the Unseen to gain insurmountable amounts of life). Those factors (as well as rarity) are what I expect to keep Den Protector largely grounded for the time being.

Dragonlord Atarka, however, is about to get paid. You know that a card is good when three-color decks are splashing to be able to play it at a Pro Tour. We talked about him (her?) last week, and apparently my read on the card barely scratched the surface.

Want to hear that bad part? I didn’t pick up any extras going into the weekend. I know, I’m bummed. I really want to play that Atarka Abzan deck. So why didn’t I buy in? Because I’m an idiot. Let me give you a long-winded response why:

My Magic finance philosophy is largely defined by something that I first spelled out in January of this year. 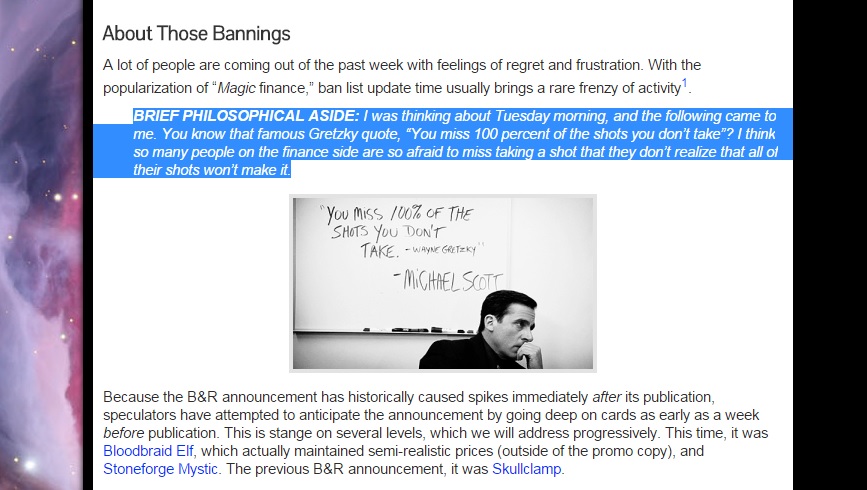 The highlighted part is the most important, but I included the rest for a little context (it was B&R update time) and also because I liked The Office.

I try to approach Magic finance from the perspective of someone who is not a store owner (with the powerful ability to buylist), and has a fixed amount of Magic-dedicated capital to spend at any given time. While my two big buys prior to the tournament (Pitiless Horde and Dragonlord’s Prerogative) haven’t moved since the weekend, the buy-in for them was negligible. Had I bought Dragonlord Atarka in the days leading up to the tournament, they would have individually cost me anywhere from seven to ten dollars (my order of 26 Pitiless Hordes and 20 Dragonlord’s Prerogatives cost me about $17, shipped). Let’s say, just for fun, that I did buy 20 Dragonlord Atarka for $10 each (most places would upgrade you to free shipping at that point) the day before the event—the current best buylist price (as of Wednesday, April 15) is $11.75 to Troll and Toad. This means that if I want to make $1.75 (before shipping costs and ignoring any PayPal fees), I have to send these cards to Kentucky and hope they make it. The other choices are to try and sell them piecemeal on the internet or to PucaTrade them away for “value” (even though this means I won’t get any of that $200 seed money back in my bank account).

But let’s now say that the card didn’t break out over the weekend, either because of some unforeseen metagame wrinkle, or because the people with the best Atarka technology bombed out in Draft. In this case, I have spent $200 (a lot of money for me, and presumably most people) on something that I am about to have a very hard time recouping on. Even if that was all “Magic money,” suddenly my future buying power is hamstrung by the fact that I have a lot of money tied up in a card that I need to move at or above its current retail price.

Insurance and risk management professionals typically assess need by something called “MPL” or “Maximum Possible Loss.” If your $2,000,000 building burns down, blows up, or gets attacked by some kind of Cloverfield monster tomorrow, you have suffered the MPL ($2,000,000). While the technicalities are different, you should always approach an investment knowing what the MPL is. If I bought the dragons on Thursday, the best possible buylist price on Friday was $6.50, a loss of $3.50 on my initial cost of $10. In our worst-case scenario, Atarka bombs out at the Pro Tour as bad as that StarCraft guy they invited that one time, and the buylist price hovers around $5.50 (Thursday’s best price) to $6.50 until Magic Origins. If I want access to any of that $200 I just spent, I have to eat a loss of at least $70. Heck, I could have just bought a Wasteland at that point! Compare this to the maximum possible loss of the purchase I did make:

Let’s assume that none of these cards ever get outside of a bulk box, and the best I am ever able to recoup on these is a dime each—the best case then is that I’m getting $5 in trade somewhere or a free value menu lunch at Taco Bell. Comparing this to the Atarka scenario, I’m getting back 27 percent of my initial investment, versus 65 percent for the Dragonlord, but the buy I made is diversified (two cards instead of one), it had much less investment of capital, and I got significantly more cards. Even if I get literally nothing out of either purchase, it’s much easier to justify losing (and subsequently make back) $17 than $200.

That’s why I’m fine losing out on things like Atarka: I’d rather kick myself for missing a winner than for picking a loser.

I want to touch quickly on a unique topic that has been pretty popular in the ProTrader forums the last week.

Brief Marketing Aside: By the way, if you aren’t on the ProTrader forums, you really should be. I know this is going to read as me towing the company line, but I really think it’s the best value in terms of subscription for Magic content (especially with all the cool stuff coming soon!). I was using MTGPrice before it was cool to use MTGPrice. Alright, alright, alright. 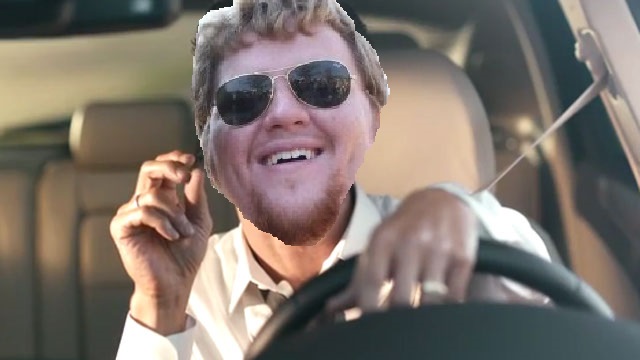 Anyway, the first hot topic has been the new prerelease foil treatment. Ultimately, the debate has come down to actual scarcity versus perceived demand. Prerelease Tasigurs are much rarer than set foil Tasigurs, but how much extra is that gold lettering worth? Currently, it’s actually a detriment to the card, with set foils being worth roughly $30 and the promos going for about $25. Siege Rhino promos are worth about two bucks more than the set foils, though, and both versions of Anafenza are about the same. The similarity in all of these cases is that there is more demand for set foils than promos (according to the “Wants” tracker on PucaTrade, at least). Part of this is going to have to do with uniformity for playsets—it’s a hedge against narrow corner cases, but competitive players typically want their cards to all match to avoid giving away information unnecessarily. If someone absolutely has to own the rarest version of something from this (and presumably future) block(s), then they need to own the prerelease foil. Ultimately, however, I expect the prices to largely resemble the set foil prices, since it will be easier to find complete sets of set foil Rhinos than prerelease ones, but the prerelease copies won’t be too undervalued since they will still have appeal in singleton formats like Cube and EDH. It’s going to be a learning lesson moving forward, but any prerelease foil that is ever significantly cheaper than the set foil is probably a good buy.

Well, that’s going to be all for today. As always, feel free to reach out in the comments if you have any thoughts about this week’s article, and I’ll see you next week! Oh, and don’t forget to submit your questions for the mailbag article! I’ve gotten some good ones already, and it’s been tempting not to answer them right away!

1 Prerogative did make a few appearances, though, and my genuine expectation is that it will get more attention after Khans (and with it Dig Through Time) gets rotated out of standard. Remember that DTK will be in the format longer than KTK.

2 It still amazes me that this card sees zero Constructed play. It was kinda popular last time!

5 thoughts on “Hits and Misses”