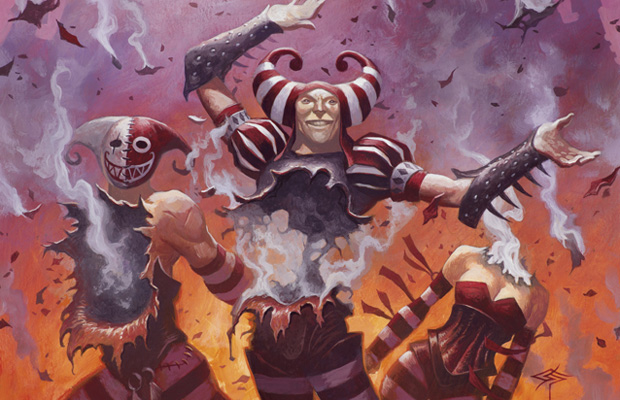 If you haven’t caught on by now, I’m not your typical #MTGFinance guy. I don’t like graphs or pie charts and I don’t look at the daily gain / loss reports that are generated by various sites. I’ll confess that I don’t even read most of what my compatriots have written outside of Twitter. I often wonder how I ended up writing a weekly column dedicated to Magic finance when I take such an adversarial stance against the concept in general.

But now I’m on the inside and I like to tell myself that I’m fighting the good fight … dismantling this Diabolic Machine from the inside. 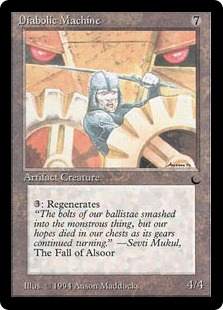 You can see me there (sans beard) getting ready to thrust my sword into the evil gears that turn continuously powering this machine of destruction.

Don’t get me wrong, some of what we write about is useful. The basic economics put in Magic terms is hugely beneficial for people’s understandings of card prices and the how and why of their movement.  Understanding supply, demand, and price elasticity goes a long way into understanding how price spikes work. This is great stuff to know.

The finance community has come along way from the weekly articles where Medina taught us different ways to convince a stranger that their cards were worth less than his. But we still do a lot of things that I question.

The observer effect is a scientific principle that basically says you can’t measure something without effecting the results of that measurement.

For example, a mercury thermometer can’t take your temperature without absorbing some of the heat your body produces, thus altering your body’s temperature. Another example would be Jane Goodall studying chimpanzees in their natural habitat … you know what doesn’t occur naturally in their habitat? Jane Goodalls. By merely being there to observe, she altered the behavior of those she was observing.

While sometimes the effect of observation is going to be on the impossibly low end of the spectrum, like taking the temperature of the ocean. Other times it’s going to have a direct impact on the results, like you’d see in your psychologists office.

Where am I going with this and does it have to do with Magic cards?

One of things you’ll see us Magic financiers do is send out Tweets like this one. We’ll suggest a card publicly because we’re an altruistic bunch and our only interest is to help others. We’re just thinking of the greater good and want everyone to make money. It’s our little way of paying our followers back for making us into the proto-gods that we’ve become in this cottage industry.*

Now first I have to admit that I pick Nick for this because we’ve had this debate a number of times and I’ve determined through repeated observations in the wild that he is an absolute monster and most who know him will back this up. He’s also (usually) a good sport when it comes to this sort of dissenting discourse.

Hypothesis: by making a public observation of a card’s value, we’re affecting the price of that card.

The Morality of Intent

This is where things get murky for me, and where the debate has gone off the rails for everyone that I’ve ever attempted to have it with.

Why are we tweeting out or writing about this information? For some of us, it’s what we get paid to do. Providing you with insights on card value is what we’re getting paid to do, it’s why we’re here at all.

For others, it’s about building a brand … I don’t know what exactly that brand is selling, but branding is important you know!

Others still just want to be right, in public. We want that “I listened to this guy and made $100, you should listen to him too” endorsement. We want that credibility and to be considered an expert in our chosen field. 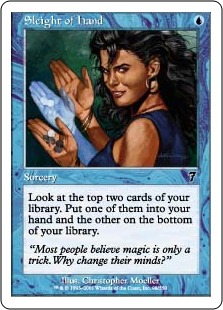 Ultimately it’s a performance, a magic trick we perform so that we can revel in the applause. It’s not enough to simply buy some cards and then tell people how much money we made buying those cards, we have to put on the show. And like any good magician, the audience is manipulated into seeing what the performer wants.

One of the most noticeable effects we’ve seen the last couple of years is the bandwagon effect in #mtgfinance. It starts with a card being mentioned, then the price starts to move, and then the next thing you know the silent masses buy out the card and relist it at ridiculous prices. But what happens when the buyout isn’t complete? The price comes crashing back down to reality because Bob’s Card Shack is still selling Bösium Strip for $3. 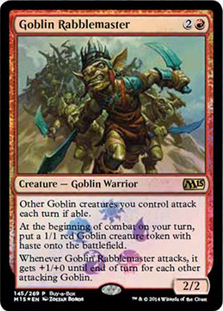 So what’s the difference between one guy buying out a 1,000 copies of a card and 50 people buying 20 copies each? When one guy relists his cards to sell at a higher price he’s just that crazy guy on TCG that sells things for way too much, but when 50 people relist at higher prices … it just might stick.

I’ve asked numerous people why they tweet out “hot tips” if they aren’t trying to get more people to buy in and they’ve given me a variety of answers. Let’s look at a few of those ideas.

If you’re not 100% certain it’s a good investment, how sure are you? Should you be recommending people buy in on a card that you’re only 60% sure of? Are you trying to turn a 60% into a 70 or 80%? Who are you trying to convince that your target is a good spec? Yourself or the general public?

The idea that you can make “enough money” off of a spec target that you’re buying only to make money is kind of ridiculous.

“I don’t really think my tweet will have an impact” – then why are you tweeting about it? This is akin to the argument about mana weaving before shuffling your deck, either it does something and you’re technically cheating or it does nothing and you’re wasting your time.

When I tweet about a card that I think is a good buy, it’s because I’m not 100% certain (I’m rarely more than 99% sure of anything). If I was ever 100% certain about a spec target, I would silently buy out the entire internet.

I want to have credibility. I want to be famous. I want to be an authority on Magic finance. I want people to come to me with opportunities to work for them, I want a large network that provides me more of these opportunities. I want to see my phone lighting up with praise and testimonials.

I want to be honest. I want to be the change I want to see in the world. I want more people to be aware and honest about the things the Magic finance community does. If for no other reason than to avoid being implicated in a global pricing conspiracy orchestrated by a shadowy card Illuminati.

This is where I restate my premise for dramatic effect and summarize the things I’ve said in a slightly different way.

Making observations on card prices absolutely has an effect on card prices. You know why the price of price of a Revised edition Ironclaw Orcs hasn’t really changed in twenty years? Because nobody cares. As soon as we start caring about a card and making others care about a card, we have an impact on it.

That impact varies from person to person. I could write about a card every week for a month and it would likely have less impact than Chas Andres or Gerry Thompson writing about it once. Some people are starting avalanches while others only have the clout to check the temperature of the ocean, but both are impacting the things they observe. 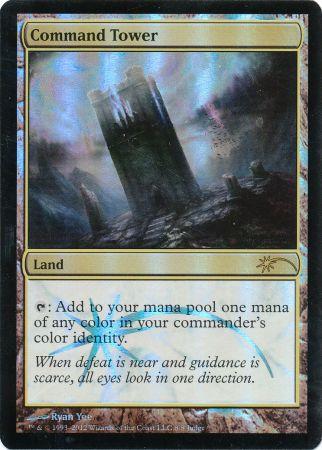 Whether we choose to acknowledge, deny, or embrace it; all of our observations are impacting the cards we observe. Act accordingly.

For more hot card tips you can find me on Twitter: @GoingMadlem