Magic Origins is upon us, and last weekend we had the opportunity to watch the new cards in action. The first weekend of any new set’s legality in Standard is always an exciting one and Origins was no exception. On center stage we could watch players battle with updated decks at the Chicago Star City Games Open.

Watching the first large Standard tournament after a new set’s release can cause a lot of early hype for cards getting camera time. It always seems like a handful of cards get all the attention, inevitably leading to sudden price spikes. After all, Origins has only been available for a week now and supply of any singles from the set are dangerously thin. This can lead to some pretty crazy price movements.

I had the pleasure of watching a couple games on camera throughout Saturday, and I look forward to watching more later today (being Sunday). With this context in mind, I want to touch on a few observations I’ve made so far along with my recommendations and cautions.

Jeff Hoogland’s innovative U/W Control deck received decent camera time on Saturday. He was even called upon to do a well-deserved deck tech. 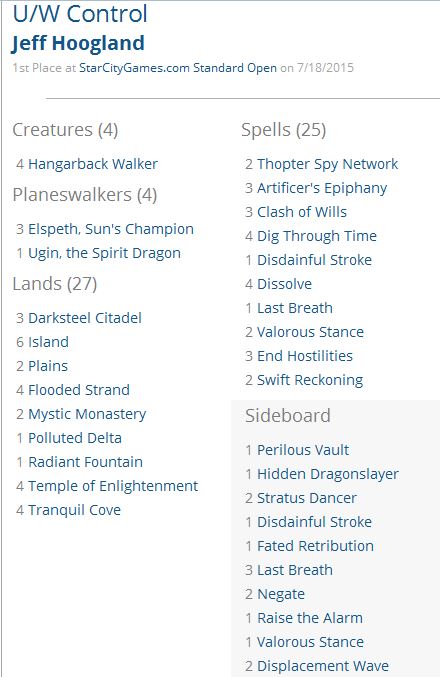 What sparked the most interest to me in this deck were the Origins cards that played a significant role in its strategy. Consider the only creature in the deck, for starters: Hangarback Walker.

When this rare began trading on TCG Player, it was immediately condemned to near-bulk status preselling in the $1.50 range. But it didn’t take long for the artifact creature to move higher. After yesterday’s appearance throughout SCG Chicago live coverage, Hangarback Walker bumped up a tad more, solidifying its status as non-bulk…at least for now.

My take? Initially I wasn’t a believer. Artifacts with XX in their casting cost haven’t been good since Chalice of the Void. But after watching Hoogland’s deck tech, I slowly warmed up to the card. Putting little at stake, I grabbed a playset to have on hand in case this card really breaks out.

I really like Jeff’s comment that this card can be a relevant 2-drop. It also has versatility in late-game. Hangarback Walker also fits into numerous builds because of its colorless casting cost – potential breakout Standard cards are often the cards that work in multiple archetypes. With these qualities, I’m certainly going to be keeping a close watch on this card. If it gets even more successful camera time today, I could easily see this hitting $10 for a day, then settling in the $5-$7 range in the short term. Being from Origins, if this card shows any mainstay then it’ll have a shot at maintaining that $10 price tag in a couple months.

Hangarback Walker wasn’t the only Origins card that made Hoogland’s deck new and exciting. He also included two copies of Thopter Spy Network to work in cooperation along with Hangarback Walker.

Again we have a card that was deemed as virtual bulk when it began its life at a buck. But over the last couple days we saw the price tag jump from $1 to over $3. Jeff Hoogland’s creative use of the blue enchantment is likely a significant catalyst to this movement. The card enables card draw – something control decks thrive on – and it even combos well with Darksteel Citadel (useful artifact land in the deck) and Hangarback Walker, which leaves behind even more flying thopter dudes when it dies.

I’m extremely hesitant on this card. I was one click away before pulling the trigger on buying a set when I decided to consult with a trustworthy source, MTG Price’s own Jim Casale. Not only did he set me straight on Thopter Spy Network, he also expressed overlapping sentiment on Hangarback Walker. 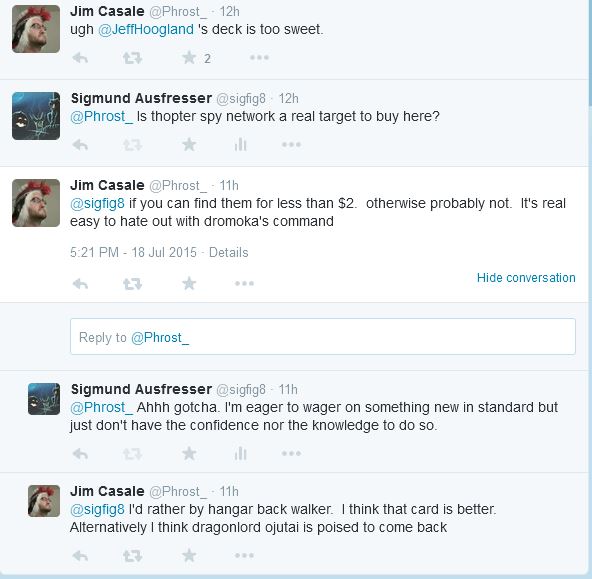 Hoogland’s deck ran a few other Origins cards, but only Commons and Uncommons in the main deck. He did include two copies of Displacement Wave in the sideboard, which I will definitely be keeping my eye on going forward. The blue sorcery could be devastating to token-based strategies, but if it remains only in sideboards then its price potential isn’t too great.

Moving forward, I definitely prefer Hangarback Walker over Thopter Spy Network. Hangarback Walker gives so much more value and doesn’t depend on artifacts to work. The fact Hangarback is the cheaper of the two rares makes little sense to me – this is my favorite target coming out of the new U/W Control deck. Even if the deck itself does not remain relevant post-Pro Tour, the artifact creature still has a chance at squeezing into an array of other builds.

One other player received a deck tech on Saturday of the Chicago SCG Open: Matthew Tickal’s 5-Color Rally. 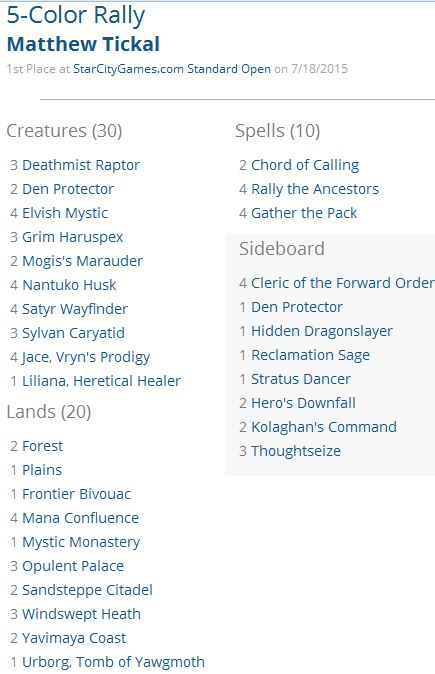 Talk about innovative! Any deck that runs Chord of Calling naturally gets my attention. But Chord is far less interesting in this build when you compare it to the white instant deck namesake Rally the Ancestors. 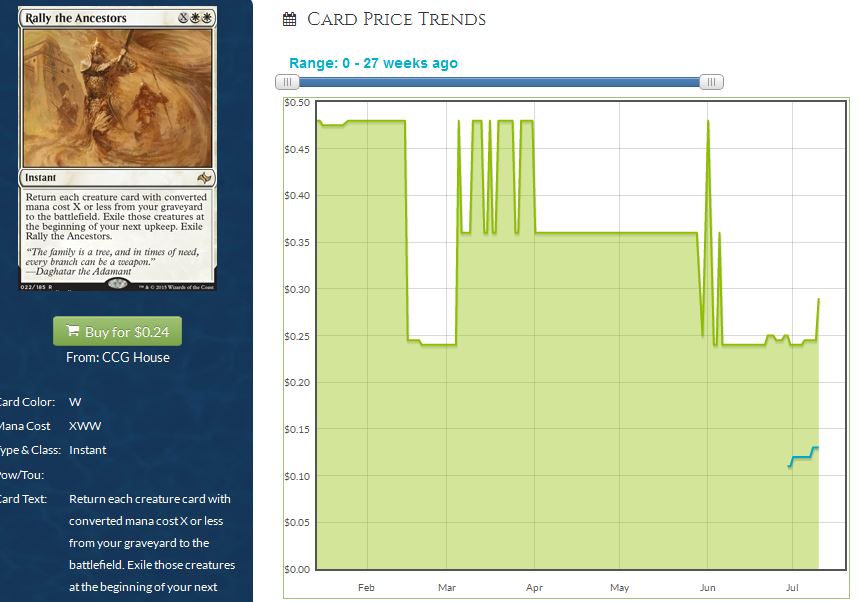 This rare from Fate Reforged was purely bulk, never even showing up on most vendor buy lists until very recently. The card has been trading between $0.25 and $0.50 since forever. But Tickal just may have changed that.

His strategy is incredibly explosive, gaining endless value off Grim Haruspex, Deathmist Raptor, Den Protector, Satyr Wayfinder, and Origins common Nantuko Husk. The deck manages endless triggers from all the creature dying and returning. Handling all of these mechanics has to be very complicated. Complexity may be a barrier to becoming ubiquitous in Standard, but I have to be honest here – the deck looks really sweet. If anything, it showcases the potential power level of Rally the Ancestors, a card I bought a few sets of last weekend for very cheap. Even if sets hit $5 on eBay, I’ll still eek out a modest profit. And there is certainly potential for greater upside.

As for Origins cards in the deck, look no further than Jace, Vryn’s Prodigy and Liliana, Heretical Healer. The former is played as a 4-of while the latter is a singleton. I’m beginning to believe that Jace may be the most played new Planeswalker from the set, but it’s probably premature to make such a bold claim. I am fairly certain that at least one of the flip Planeswalkers will remain relevant and maintain a $30 price tag throughout Standard, but I am not prepared to predict which one. My suggestion on these is to watch their utility closely in the coming weeks, but hold off from buying in with cash on these already-expensive cards. Let’s wait for the supply to commoditize these cards first before we start looking at prices seriously.

These two decks received a great deal of attention throughout the weekend, and for good reason. Star City Games likes to showcase innovative, successful strategies because it brings viewers. It’s a billion times more interesting to watch $0.15 rares like Rally the Ancestors take over matches than it is watching the Abzan mirror. I give Star City a lot of credit for their approach to live broadcasting their tournaments.

However this approach brings along with it a potential risk – emotional speculation. Seeing how awesome Thopter Spy Network is in one match, for example, can provide very misleading data on how the card may perform at the Pro Tour. It’s highly possible the blue enchantment gets no notice at any event ever again. Whenever new sets come out, there seem to be strategies that can dominate an ill-prepared metagame but then struggle for the rest of Standard.

Take it from someone who lost money on Contested War Zone – you do not want to speculate on a card that is in only strong in one archetype, which can also be hated out very easily. 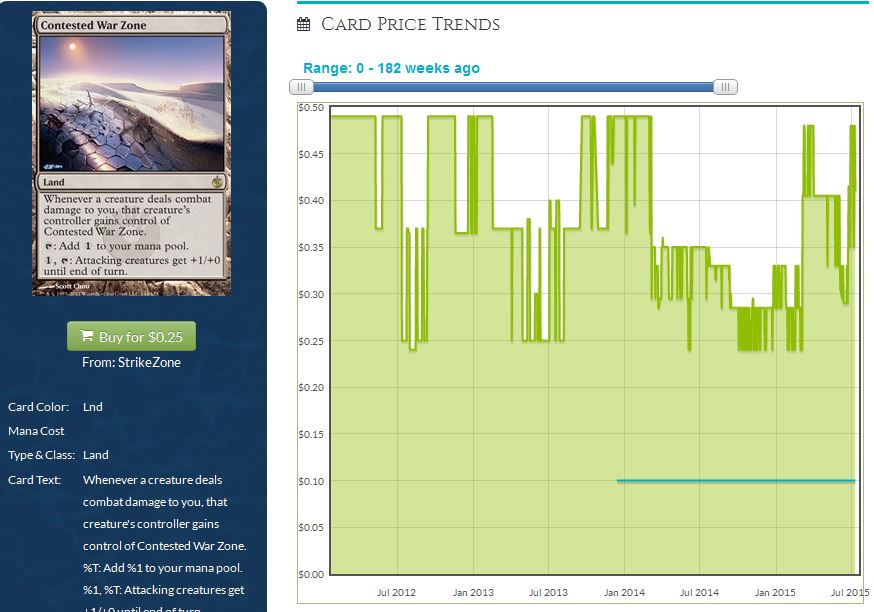 Contested War Zone traded at $6 the first weekend it was Standard legal. It’s been a bulk rare ever since. I’m not saying Thopter Spy Network will definitely be a bulk rare. I’m just expressing extreme caution when buying into new rares that are successful in a young metagame. The Pro Tour will reveal much more.

For now, I’m content with my playset of Hangarback Walkers and a handful of Rally the Ancestors. The former is an artifact creature with utility in early and late game – a true versatile card that could work in numerous archetypes. The latter is a penny stock, worth grabbing at a quarter just to tell a story and ride the wave. And in both cases, I’m committing very little money because I recognize these strategies can be as evanescent as fog on a summer morning.

This was the most exciting Standard tournament I’ve seen in months. I just got so sick of watching endless Abzan mirrors. Standard always tends to get stale this time of year. But that’s all about to change as rotation approaches.

In the meantime, we need to be extremely careful with our Origins speculation. Strategies that make a splash this weekend may never make waves again. The safest play is to find versatile cards that could fit into varying decks, and acquire cautiously. There will be a time to buy in aggressively, but not until the Pro Tour. The Pro Tour is when the real buying opportunities surface, as players scramble to acquire cards to play the decks wielded by successful pros.

And who knows? Maybe Sphinx’s Tutelage – which also received some camera time last weekend – will continue to be a thing in Standard. Turbo-Fog received some camera time last Saturday and the deck looked pretty sweet. I don’t know if Wizards wants this deck to be good or not. Some casual players are excited by mill strategies, but watching one player sit there and cast fog while another sits there with a ton of harmless creatures hardly makes for exciting Magic.

Either way, we’re in for some exciting times ahead in Standard. This shift in focus will be reflected in card prices, and we’ll likely see a drift downward in Modern values and new weekly buyouts of Standard targets. We can remain in front of the curve by watching how the metagame unfolds. Come rotation we’ll see a brand new Standard. And if there’s room for a Tier 1 Rally the Ancestors strategy, I just may have to try my hand at the format.

2 thoughts on “PROTRADER: Origins Makes a Splash at SCG Chicago”