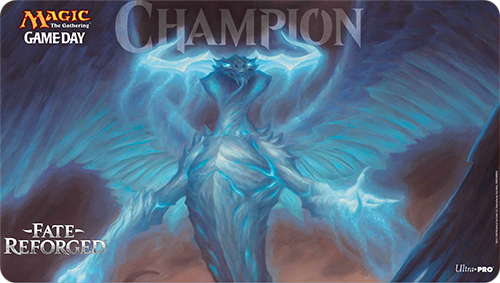 Welcome back! A while ago, I wrote about evaluating the value of Grand Prix playmats. In the second part of the Playmat Finance series, we are going to check out two other categories of collectible Magic playmats out there.

First off, let’s start with one of my favorite playmats of all time, and the category in which the mat falls under. Dark Ascension Game Day was the first time we saw a Game Day event that awarded an exclusive playmat to each tournament’s winner. It added a bit of prestige to Game Days and made the event a little bit more competitive.

The artwork featured on the first-ever Game Day playmat was the rather unassuming Thraben Heretic (does anybody even remember what the card does?). Nevertheless, the playmat is still selling for a decent price three years later. 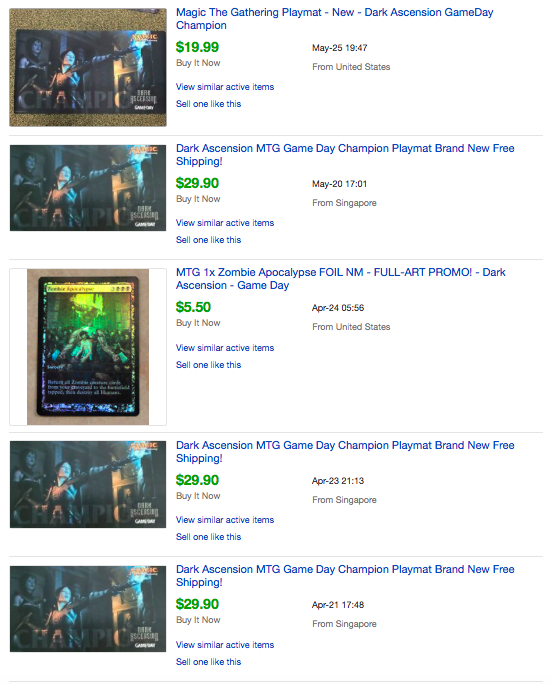 Perhaps it’s the novelty of being the first-ever Game Day playmat that has imbued it with a value of $20 to $30 on eBay three years after the event. Heck, those numbers look like a great deal when you compare it to what retailers who have the mat in stock are asking.

The Avacyn Restored Game Day that followed provided a playmat with much cooler art. It featured a character that would end up being one of the most iconic white EDH cards: Avacyn, Angel of Hope. 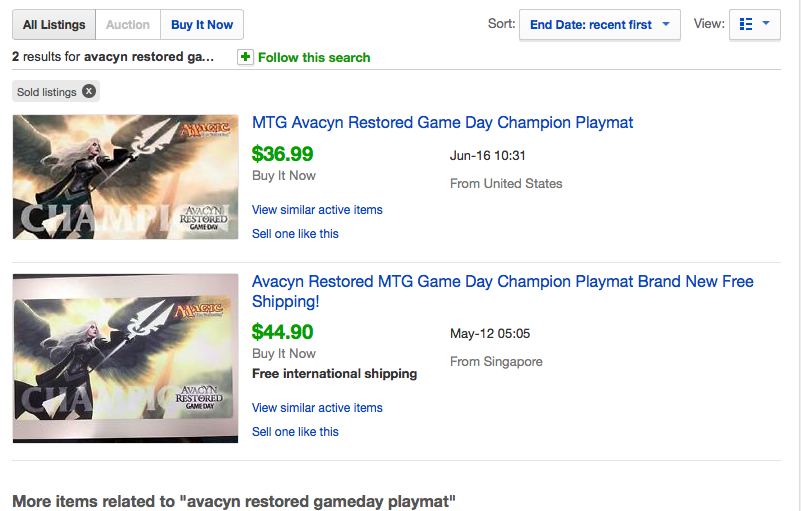 There were only two recent sales that are viewable as of this writing, but those give a good ballpark to help us estimate the price this playmat commands. As the first part of this series highlighted, the popularity of the card from which the playmat’s art originated from is the most significant influence on the playmat’s long-term value, so it unsurprising that the Avacyn Restored Game Day playmat is worth as much as Karn Liberated.

Not all Game Day playmats were able to retain the same long-term value. Most of them go for anywhere between $10 and $30. Still, there are a few other notable Game Day playmats, including the Magic 2014 one, which featured an exclusive Chandra art: 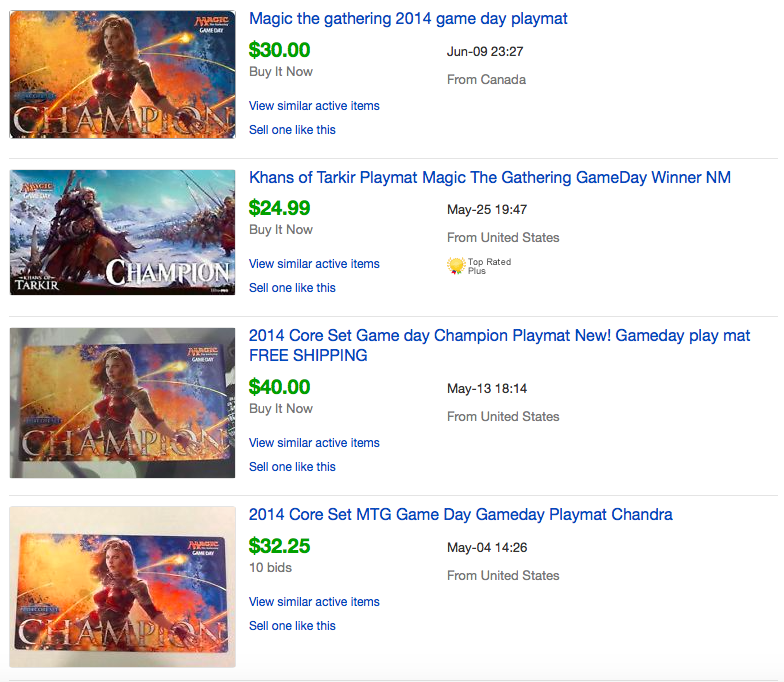 While the Magic 2014 Game Day playmat art was not from a card, I believe that this treatment of Chandra Nalaar was the first time she was depicted with strands of hair rather than her usual flaming head, which may be the reason why this playmat commands an above-average price tag and is still in demand today.

An interesting point to note about the playmat above is its price trajectory. I’ve been tracking the prices of sought after playmats for a while, mainly out of personal interest (hint: I own one of them). It seems that they usually start out at an exorbitantly high price before settling down at a more reasonable level. Based on MTGSalvation.com threads regarding the Chandra playmat above, it looks like the playmat was selling for an insane price when it was new. The coveted alternate art Ugin, the Spirit Dragon Game Day playmat was selling for up to $80 on eBay for weeks following Fate Reforged Game Day, but is now going for a lot less: 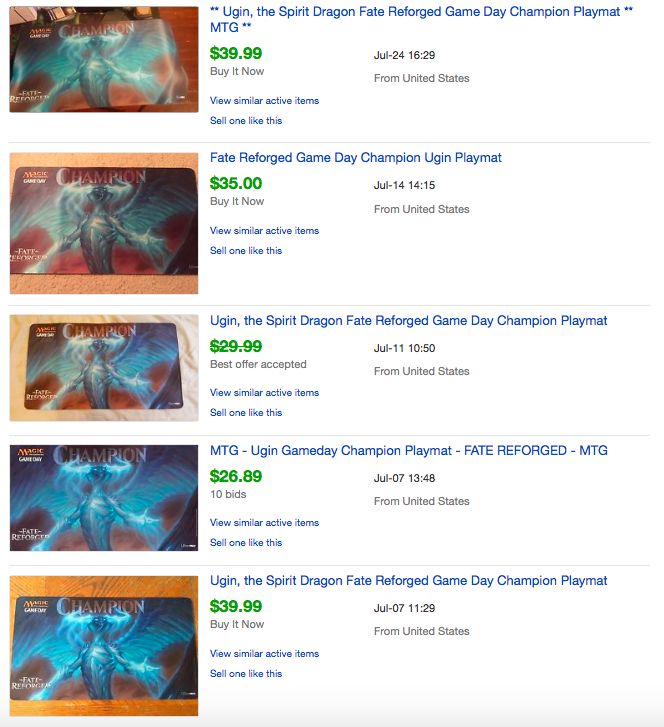 Some Grands Prix offer one or more exclusive playmats drawn by the attending artists to commemorate the Grand Prix. While these limited-edition playmats are done by Magic artists, they usually feature artwork depicting an iconic element of the Grand Prix’s venue rather than card art (as the official playmat already features card art). I’m not sure if the artists were commissioned by the Grand Prix organizers or if these playmats were done of their own accord, but some of them do sell for a good amount.

For example, only 600 of the Grand Prix Chiba Sakura Angel playmat by Johannes Voss above were sold by the organizers at that Grand Prix (300 per day for Friday and Saturday) and players who  missed the insane early morning queue on both days could purchase a copy without the Grand Prix Chiba stamp at Johannes’s booth for a measly sum of 15,000 yen. Or on eBay for just $129. 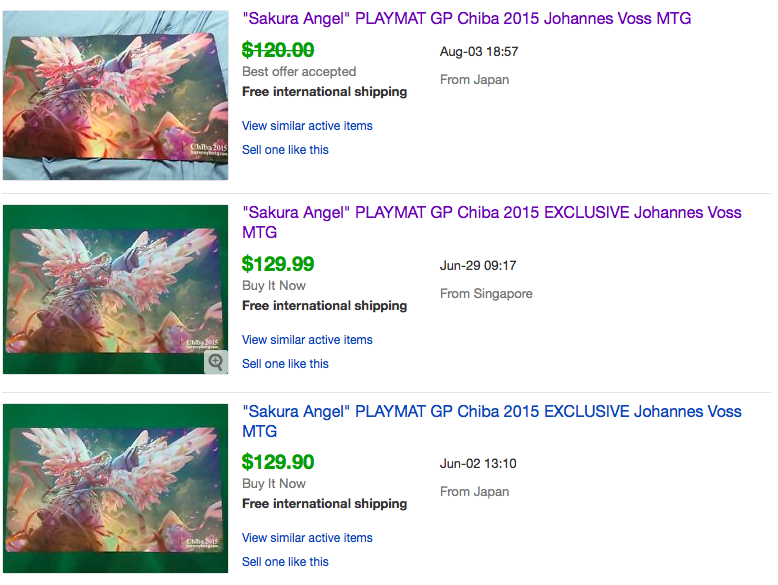 Some Grands Prix offer these event-exclusive playmats as a side event participation gift or put them up as a prize wall offering:

Evaluating these playmats is akin to venturing into the Wild West of playmat finance. While the Sakura Angel one above was fetching triple-digit sales, the Copenhagen special playmat wasn’t really selling on eBay as of this writing, and the sales for the recent Grand Prix Paris side event playmat were downright lethargic:

On the other hand, the side event/VIP playmat from Grand Prix Toronto in May this year was quite valuable:

Perhaps Magic players just love their goblins more than their gargoyles. Or maybe it was the goblins playing hockey, which I hear is pretty popular in Canada. Then again, I have not personally set foot in Canada, and all I know about the country is from listening to The Eh Team podcast.

I tried to find a metric to help me guesstimate the price of these special Grand Prix playmats: a simple non-subjective framework similar to the one I wrote about for official Grand Prix playmats in the first part of this series. We use the metric of supply and demand to pin a value on cards, and while we can easily estimate the supply of a particular Grand Prix side event playmat, the playmat’s demand is a lot harder to gauge.

A card’s demand can be approximated by it’s ubiquity in competitive formats or EDH, or even perceived casual appeal (like that one time Wizards decided to make a colorless dragon planeswalker). The value of official Grand Prix playmats is mainly influenced by the popularity of the card from which the playmat’s art derived. But attempting to pin a price on a special playmat with no card analog is a lot more complicated. Using a playmat’s aesthetics to determine the value of the playmat is a pitfall, as aesthetics are subjective. I was surprised that the Grand Prix Toronto side event playmat above was able to fetch that sort of price. I don’t even find the art appealing, nor do I have much love for goblins, but I am sure there are plenty of buyers out there who think otherwise.

Trying to price a playmat based on the artist’s popularity is equally contentious most of the time. I am a big fan of the likes of Raymond Swanland, Johannes Voss, and Magali Villeneuve, but I can’t say these are consensus opinions. Exceptions could be made when a special playmat is drawn by an undisputedly iconic Magic artist like, say, John Avon or Rob Alexander. Check out the price of the Mount Fuji playmat John Avon did for Grand Prix Shizuoka two years back: 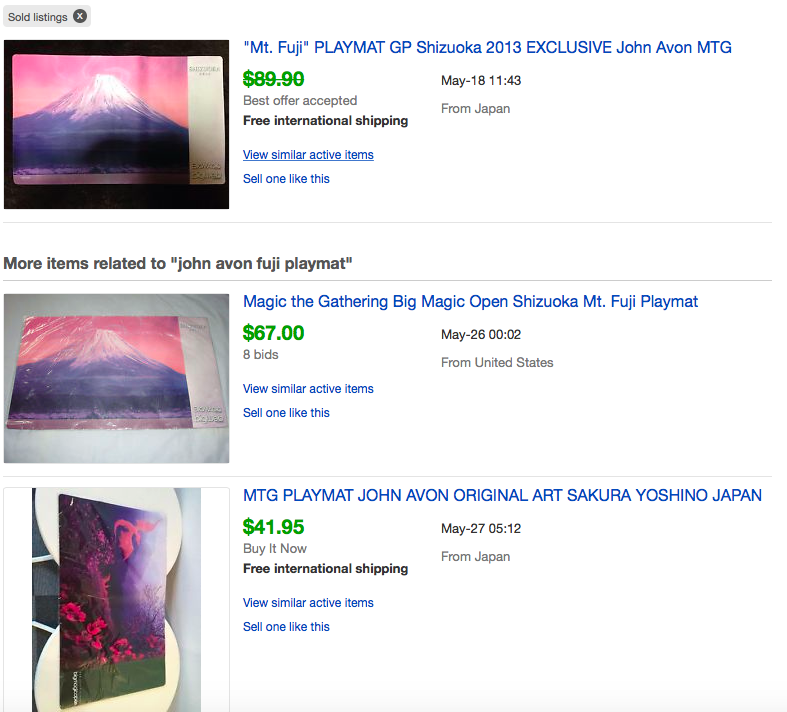 Or the Rob Alexander special from Grand Prix Kyoto recently: 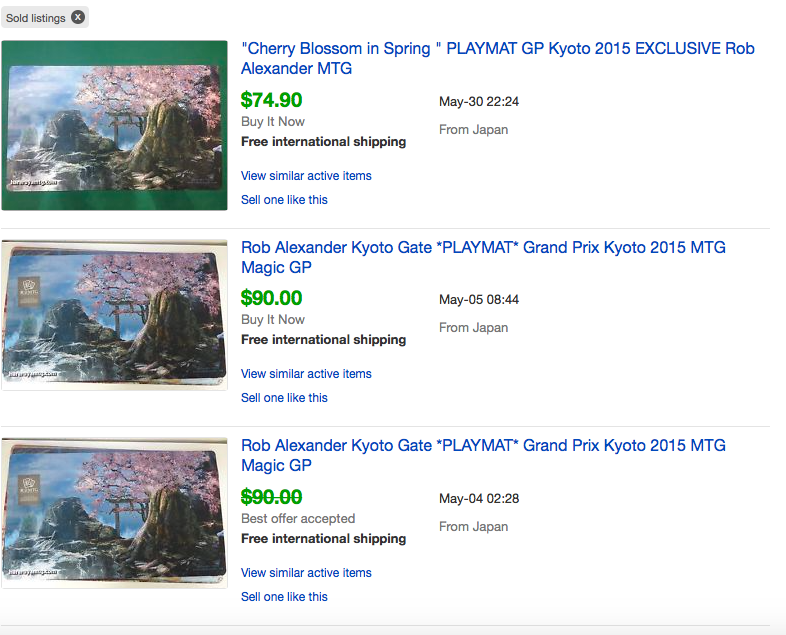 The takeaway from this segment is:

Unless you are acquainted with playmat collectors, it may be troublesome to move these mats. Official Grand Prix playmats with Magic images are easier to move, especially when they feature art from an iconic card. Take the recent Grand Prix Singapore playmat, for example. The official Grand Prix Mox Opal playmat has been selling quite well: 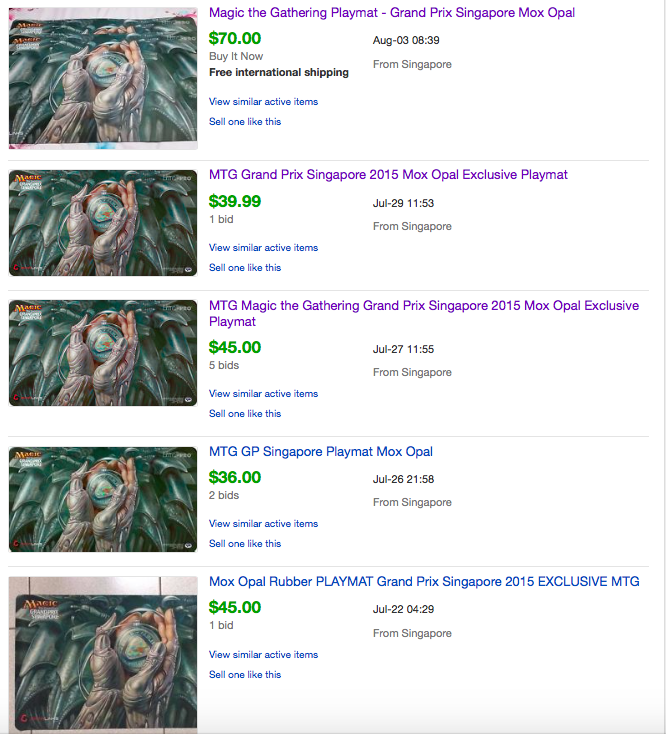 The VIP-special Rob Alexander playmat, on the other hand…

This reinforces the point that Grand Prix specials are hard to price. Rob Alexander is an undeniably popular and established Magic artist,  yet his recent Grand Prix Singapore mat only went for a third of his Grand Prix Kyoto special.

Going back to official Grand Prix playmats, a very special playmat will be given out to participants of Grand Prix San Diego this weekend:

If I’ve ever wanted to go to a Grand Prix just for its playmat, it would be this one. While there are double-sided artless leather playmats you can buy out there, this will be the first time we see a double-sided rubber-and-fabric playmat featuring Magic art, utilizing a new printing technique engineered by Ultra Pro, according to the Grand Prix San Diego website.

While Magali Villeneuve is not as established as the likes of Terese Nielsen and John Avon, some of the art she has done is just plain gorgeous and I would not be surprised to see her gaining traction in the realm of Magic art. More importantly, Narset, Enlightened Master has solidified herself as one of the most popular EDH generals to emerge from a recent set (she currently ranks second in MTGSalvation’s monthly count of popular generals). That, together with the novelty of being the first ever double-sided Magic playmat, is probably going to make this Grand Prix San Diego perk one of the most sought-after playmats in recent years.

Join me next week for the third and final part of the Playmat Finance series, where we will discuss the issue of counterfeit playmats, as well as how to take care of your playmat, a topic which a surprising number of readers were interested in. In the meantime, do share your thoughts in the comments segment below or catch me on Twitter at @theguoheng.