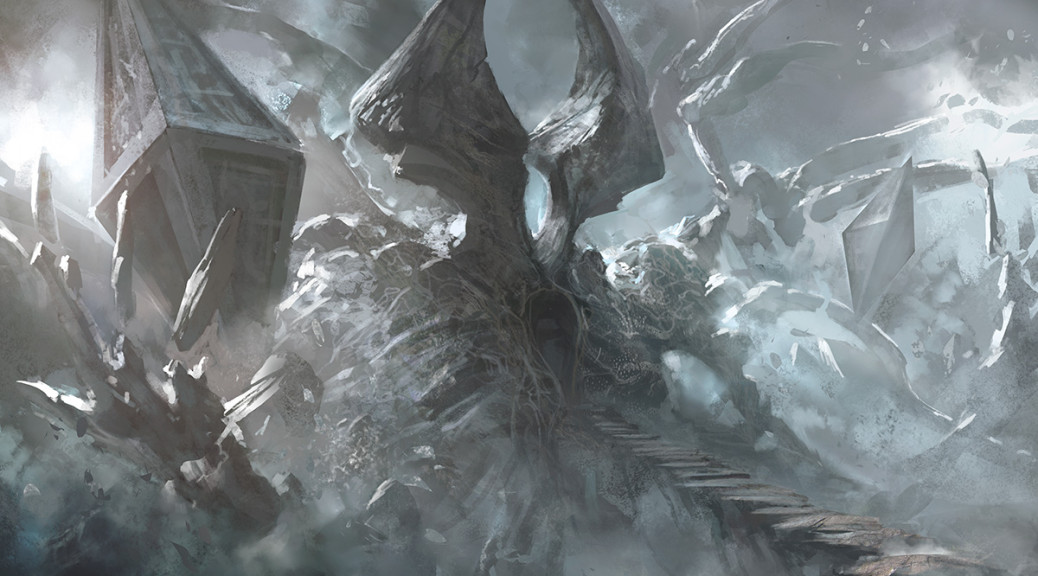 So you’ve seen this beauty right?  Noah Bradley (one of my personal favorite artists) has some new lands in the next set… and a half?  This Steam Vents art is being used for the “full” art lands in Zendikar Expeditions.

What is Zendikar Expeditions?

Let’s start out and dispel anything myths about this set.  I see too much misinformation being passed around.

Well now that we got that out of the way, what does that mean for players?  Well, a lot.  It means pre-ordering almost any card in Battle for Zendikar is a losing proposition.  It’s clear people will open obscene amounts of this product and have far more copies of most cards than they will ever need.  It also means that the price of cards from this set will quickly bottom out.  If you read my article a few weeks ago, Grinder Finance – Winter is Coming, you will know how I feel about card prices for the fall set.  Battle for Zendikar is going to continue the tradition of the fall set being the “most opened set of all time” and more because of Zendikar Expeditions.  If people are really hyped to buy cases of product to ensure opening a Zendikar Expedition card then it will drive the price of opened product down.

What’s the plan for this pre-order season?  Well it’s pretty simple.  Don’t buy anything you don’t plan on using in the first week of Battle for Zendikar Standard.  Don’t buy all of the lands.  Don’t buy the sweet new Omnath for your EDH deck.  Don’t buy bulk rares and hope they spike.  There will be cards that go up.  It’s inevitable that some things will spike the weekend of the Pro Tour.  However, the reality is if you can wait until late December, you will find that card prices absolutely plummet.  Right now most websites have the new Battle for Zendikar dual lands pre-ordering for about $40 for a playset.  These duals might be a little stronger than Theros block scry lands, but even the most expensive scry lands were only $8-10 at their peak.  The scry lands that were in Theros were always the least expensive because of the sheer number that were opened. 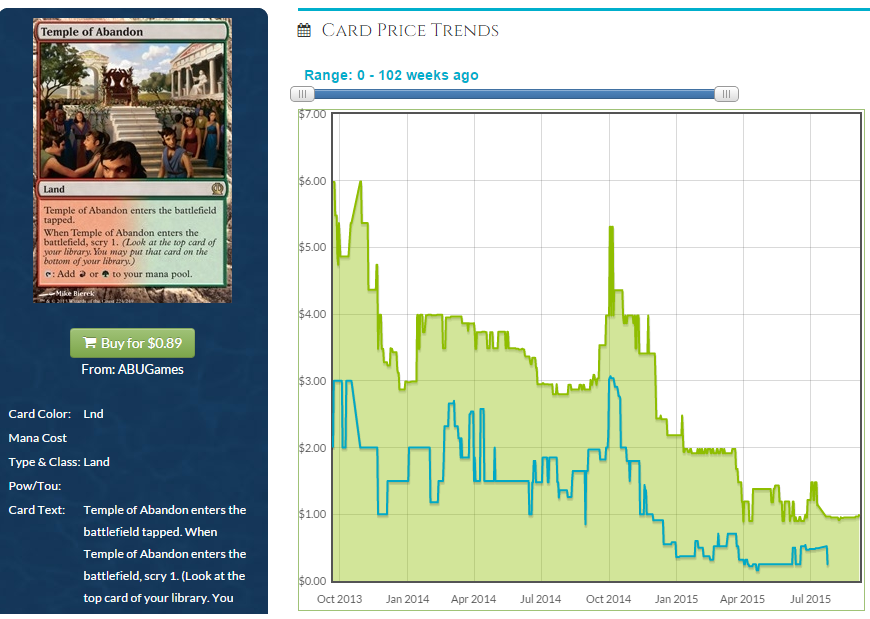 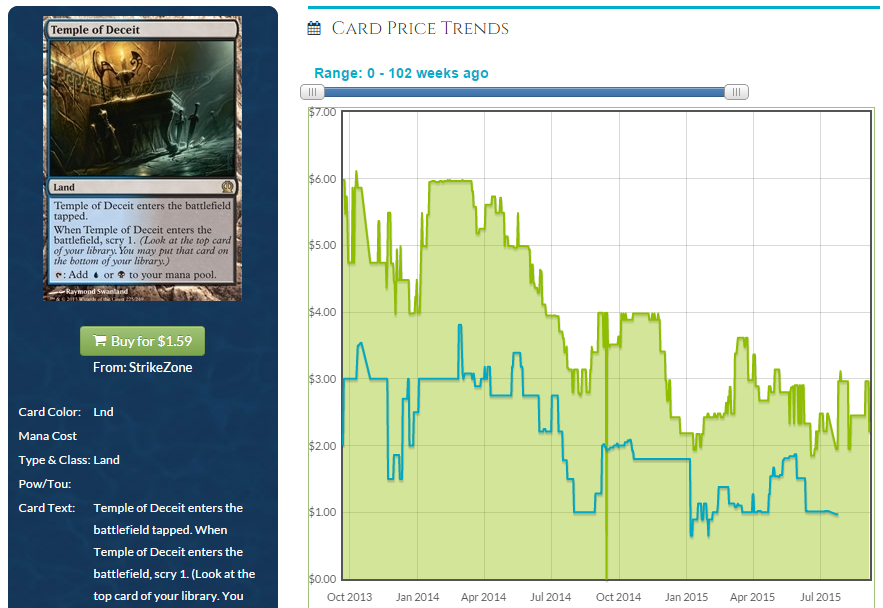 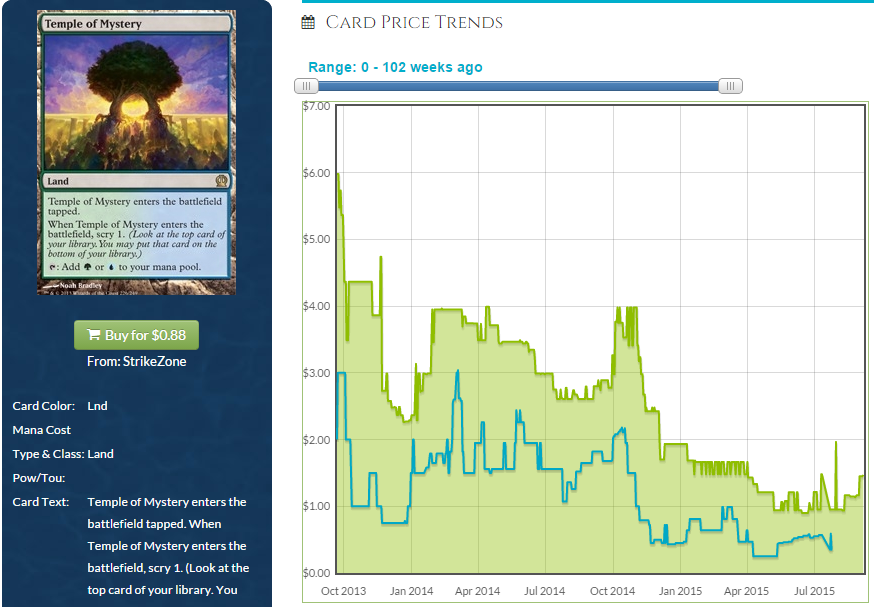 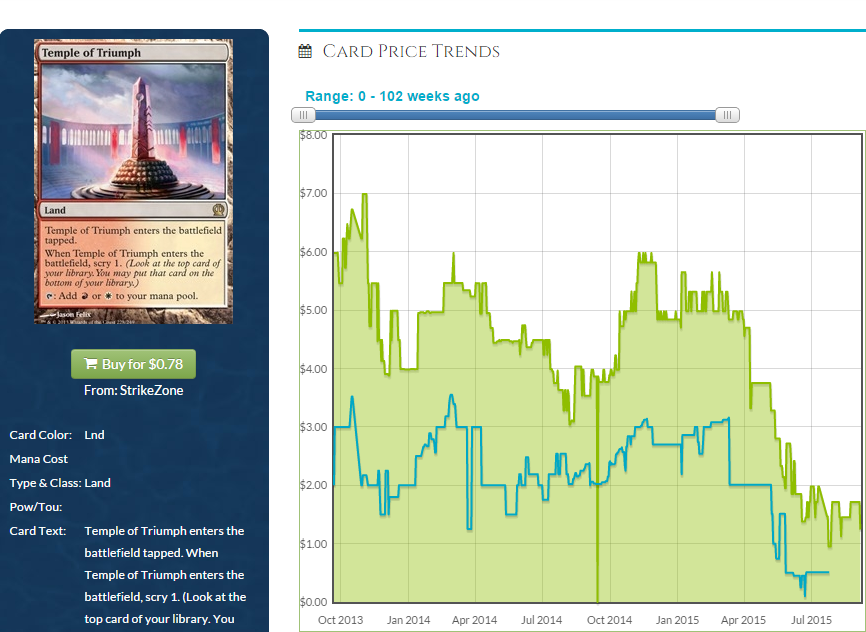 All of the temples, regardless of how playable they were, exhibited the same dip at the end of December.  You could have saved 30% to 50% on these lands if you waited until their low points to buy them.  In fact, only one of the lands even went up from it’s pre-order price after release.  I expect a similar thing to happen with the Battle for Zendikar dual lands.

There will probably be one that increases a little in price as it is in top decks, but the rest will likely see a steady decrease in price until the new year.

Don’t buy them now unless you absolutely need them.  I can’t imagine a world where Ulamog, the Ceaseless Hunger continues to stay at or above it’s current $20-25 price tag. Look at what happened to Khans of Tarkir mythic rares. 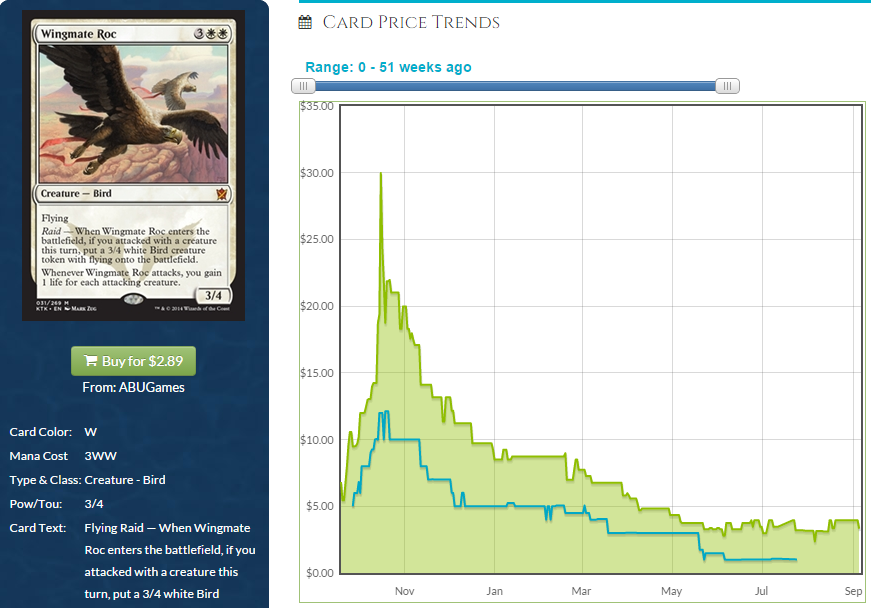 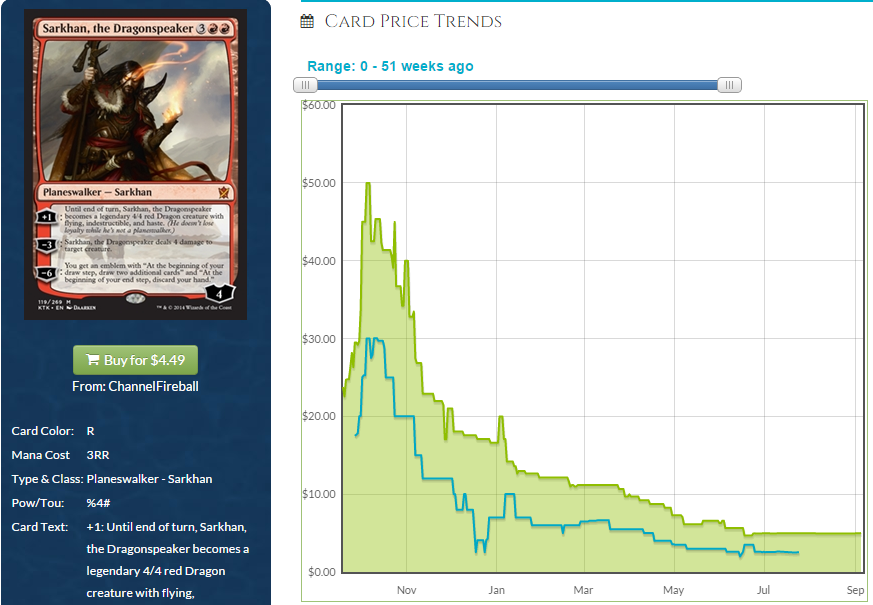 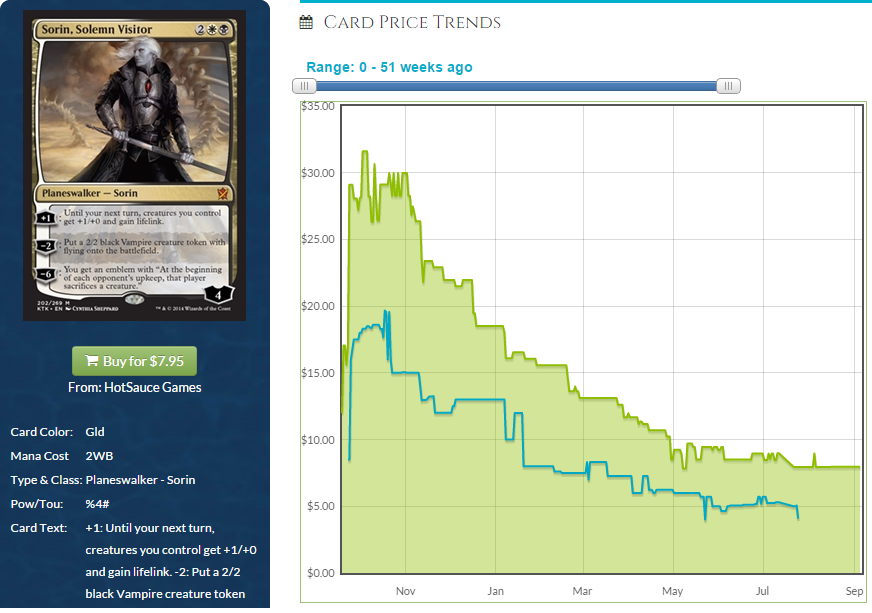 Pre-order prices were conservative.  Cards were then released.  The mythic rares that got played on the Pro Tour saw a huge spike and then ever since they have just been on a downward spiral.  Do you know what the top 10 most expensive cards are in Khans of Tarkir?  Polluted Delta, Flooded Strand, Wooded Foothills, Bloodstained Mire, Windswept Heath, See the Unwritten, Sorin Solemn Visitor, Dig Through Time, Anafenza the Foremost, and Sarkhan the Dragonspeaker.  You know what’s importantly missing from this list?  Cards that see a ton of play in Standard!  Siege Rhino isn’t even the 11th most expensive card!  Monastery Swiftspear beats out almost every Mythic and Rare in the set because of it’s eternal play.

With Battle for Zendikar looking to be the world heavy weight champion of the “most opened set in Magic history”, I don’t like pre-ordering any of the cards.  Right now, I think it is time to shore up your collection with cards from Magic Origins. 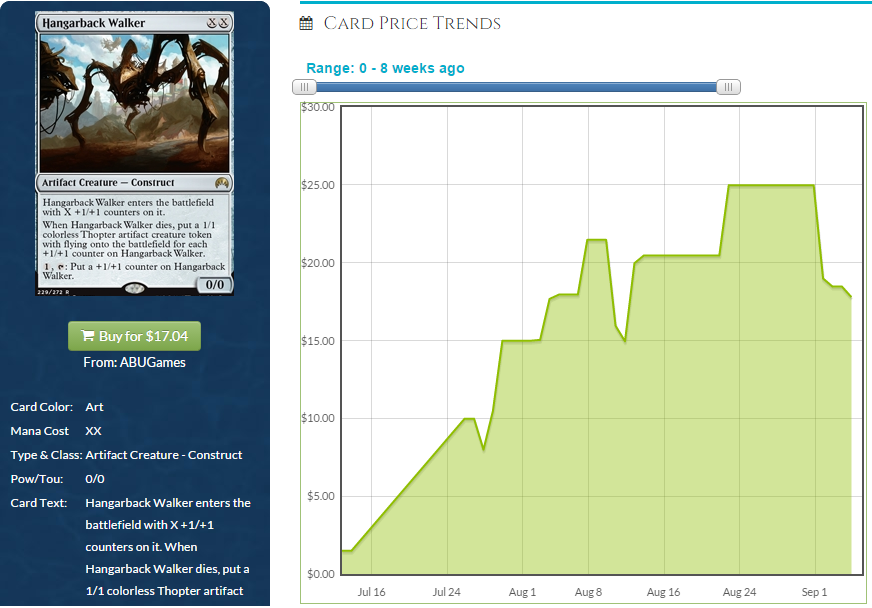 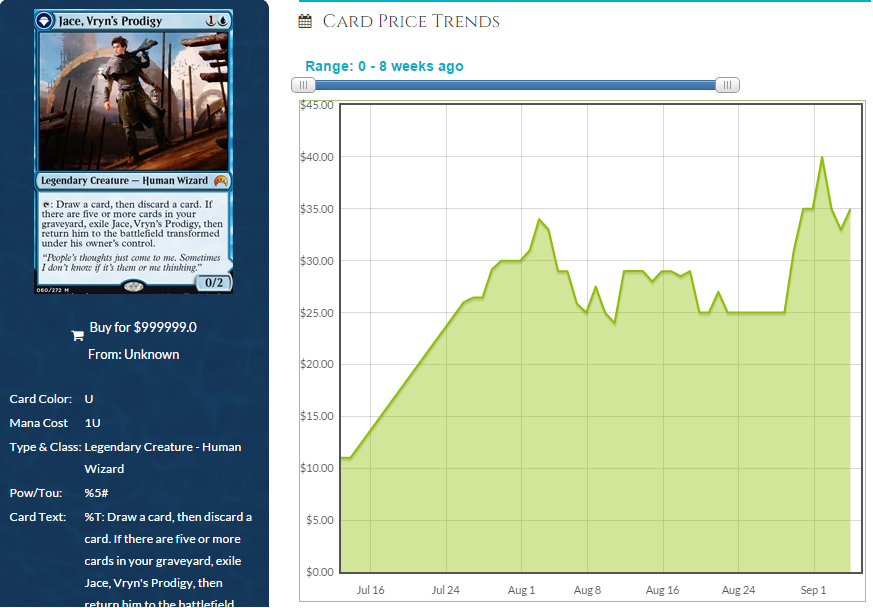 With these two cards seeing play in Legacy and Modern, there is likely not going to a reprieve for their price point.  Jace might not see a ton of Standard play but his pack foil is as of this writing, a minimum of $80 on TCG player.  That’s a sign there is strong eternal demand from players who intend to keep him in their deck long term.  I know I called him a sell a few weeks ago, but I did not see him becoming a force in Eternal formats.  Eventually it’s time to tap out and realize that this is clearly not a hype train.  Sustained growth for 2 months is a sign of a card poised to carry a lot of the weight of a set.

Hangarback Walker is the single most underrated card in the set on release.  It’s deceptively flexible and people were too worried about over paying for all of it’s effects.  What’s clear is this is no Chronomaton.  With it showing up in Vintage shops, Legacy Mud, and Modern’s Affinity, it’s hard to point to a reason this won’t be a twenty dollar bill for the foreseeable future.  With people scraping every penny they can find together for Battle for Zendikar, it is safe to say that supply on Magic Origins cards is near it’s peak.  I can’t see a reason to wait to buy in at this point. 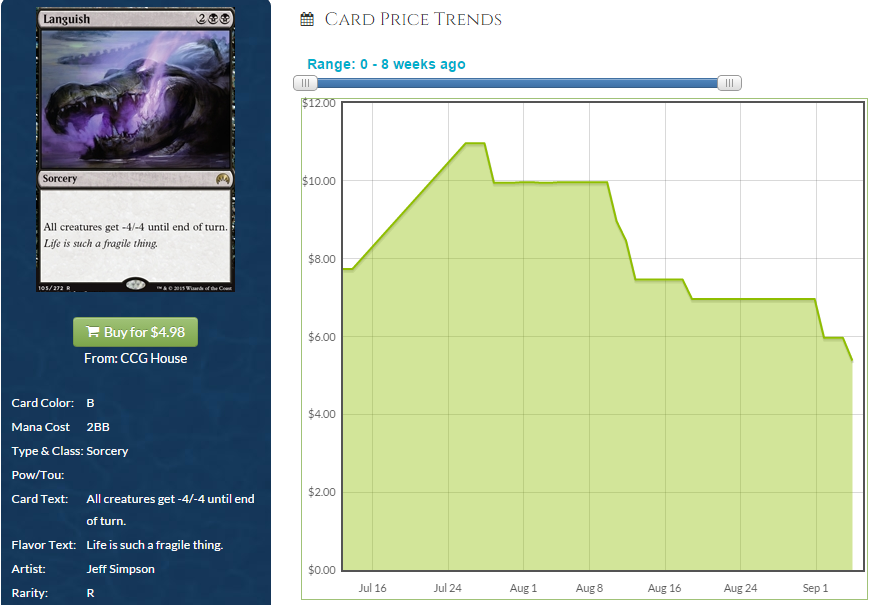 After coming down from it’s brief $11 price point, Languish is a card to keep an eye on.  If we see a lot of Allies that have less than 4 toughness, this may quickly find itself a home in many decks.  It also does a pretty decent job cleaning up Hangarback Walker scraps.  I don’t know if it will drop more before the release of Battle for Zendikar but it’s important to keep it on your radar.  If it starts to turn after the first week of post Zendikar SCG opens, you may want to buy in.

14 thoughts on “Grinder Finance – The Battle for Zendikar… Expeditions”